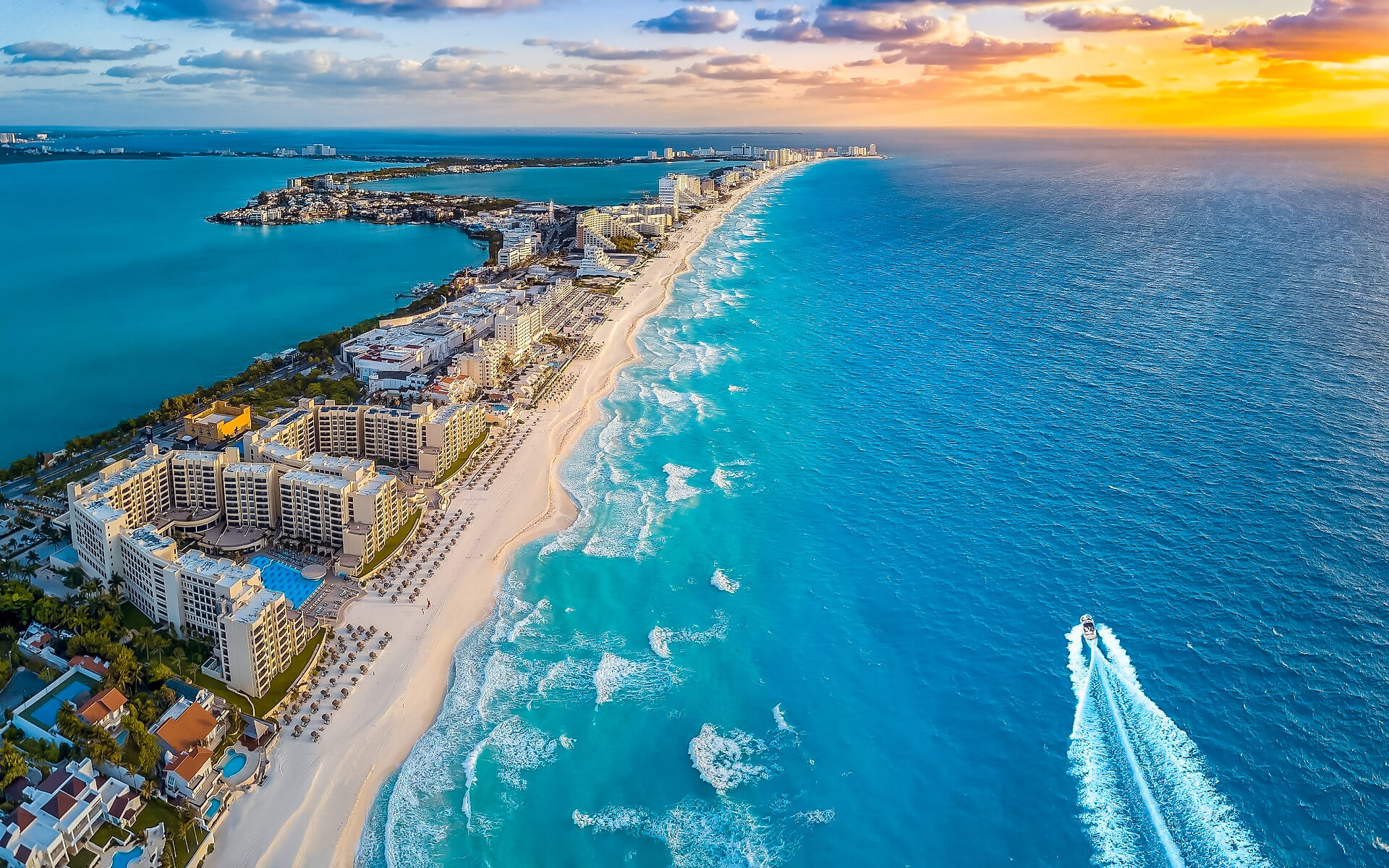 Cancún is a city in southeastern Mexico, on the Yucatán Peninsula’s northeast coast in the Mexican state of Quintana Roo. It is a well-known tourist site in Mexico and serves as the municipal headquarters of Benito Juárez.

The city is situated on the Caribbean Sea, making it one of Mexico’s most eastern locations. Cancún is situated close north of the Riviera Maya vacation area on Mexico’s Caribbean coast. The city’s name is sometimes misspelled “Cancoon” in older English-language publications, an effort to represent the word’s pronunciation. Cancun has two probable translations in the Mayan language; the first is “nest of snakes or pot.” The second (and less often recognized) interpretation is “place of the gold snake.”

Cancun’s high season typically lasts from December through April. Prices for travel and hotels skyrocket during these months, whereas they decline in the summer and early fall.

Cancún is a prominent Caribbean vacation attraction located on the northeast edge of Mexico’s Yucatán Peninsula. Along with 14 miles of beaches, there are several resorts, spas, nightclubs, and shopping centers.

Cancún’s peak season typically lasts from December until April. Both flight and accommodation prices skyrocket during these periods, whereas they decline throughout the (Northern Hemisphere) summer and early fall months. Late June is quite hot, so plan accordingly or visit during the off season. Hurricanes may pose a significant hazard in the late summer and fall of the Northern Hemisphere.

Cancún, located in the northeast corner of the Mexican Caribbean, was created on a site designated by the Mexican government as the optimum location for a new tourist development. Quintana Roo was still a territory, and the region was sparsely populated when Cancún was created. It is made up of fourteen miles of pure white beaches in the form of a “7,” as well as Mayan archaeological sites, turquoise oceans, a thriving undersea environment, and world-class tourist facilities. It is still regarded as the entrance to the Mayan World (“El Mundo Maya”). Mayan’s temples and ceremonial sites are found across the country, some ensconced in lush forest, while others are widely accessible. Attractions for tourists.

Cancún’s hotel zone is nearly totally devoted to tourism. It is densely forested with all-inclusive vacation hotels. Only stay here if you don’t mind sharing your holiday with numerous other visitors.

Downtown Cancún is a true Mexican city, particularly if you move away from the ADO bus station and neighboring hostels and hotels. Throughout your stay, you may visit several restaurants, retail complexes, marketplaces, and clubs in the downtown area.

Those who are primarily interested in beaches and scuba diving, or who are a little more daring, may easily locate accommodations on equally gorgeous and less crowded beaches about an hour or two south of Cancún. Some Spanish language abilities may help you negotiate better bargains. You may hire a vehicle or take the bus to Puerto Morelos or Tulum (about 20 minutes) (1 hr). Playa del Carmen (45 minutes, $80) located in the middle of the two, but caters to all-inclusive resort guests. Additionally, taxis are available.

Those seeking a base of operations who like nice or luxury hotels and the benefits of metropolitan life but prefer a more authentic experience may opt to stay in Mérida, Yucatán’s capital city. Numerous foreign planes arriving in Cancún make a stop at Mérida’s International Airport.

Georgia is a nation in Eurasia’s Caucasus region. It is bordered to the west by the Black Sea, to the north by Russia, to...
Read more

Togo’s capital and biggest city is Lomé. Lomé is the country’s administrative and industrial hub, as well as its main port, and is located...
Read more

Koror is the state that contains the Republic of Palau’s primary commercial center. It is made up of numerous islands, the most notable of...
Read more

Stuttgart is the capital and biggest city of Baden-Württemberg, a state in southwest Germany. Stuttgart, Germany’s sixth largest city, with a population of 600,068...
Read more

Vienna is Austria’s capital and biggest city, with a population of around 1.8 million (2.6 million including the metropolitan region), as well as its...
Read more
Unusual places