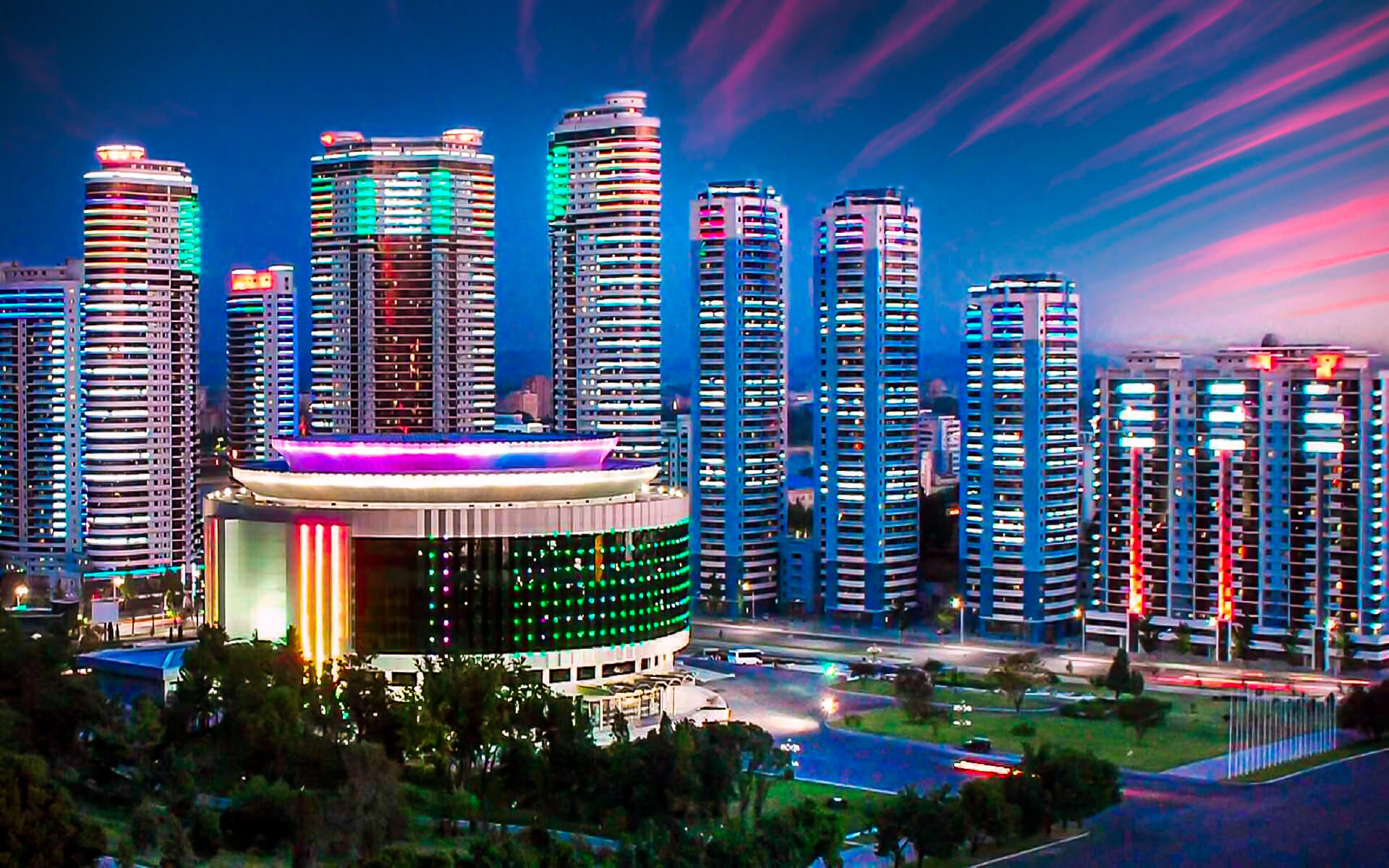 P’yŏngyang, North Korea’s capital and biggest city, with a population of around 2,750,000 people. It is located on the Taedong River in the country’s southwest.

Since the Korean War (1950–53), the capital has been extensively renovated. It is laid out with broad avenues, massive monuments, and monolithic structures.

Pyongyang was destroyed during the Korean War and has been completely rebuilt in accordance with Kim Il-vision. Sung’s His ambition was to establish a capital that would bolster Korean morale and ego in the postwar years. As a consequence, the city has vast, tree-lined boulevards and massive public buildings with terraced landscaping, mosaics, and ornate ceilings.

Foreign tourists have praised Pyongyang as one of the most beautiful cities they have seen; its Russian-style architecture reminds them of a Siberian metropolis amid winter snowfall, however edifices of traditional Korean design soften this view. It is known in the summer for its rivers, willow trees, flowers, and parks.

Pyongyang’s structures are classified into three types: monuments, buildings with traditional Korean patterns, and high-rises. Monuments, such as the Juche Tower, the Arch of Triumph, and the Mansu Hill Grand Monument, are among of North Korea’s most recognizable landmarks. The first is a 170-meter granite tower that symbolizes Juche philosophy. It was finished in 1982 and consists of 25,550 granite blocks, one for each day of Kim Il-life Sung’s up until that moment. Ryugyong Hotel, the seventh tallest building in the world in terms of floor count and one of the world’s tallest hotels, is by far the most visible structure on Pyongyang’s skyline. It is yet to be opened.

In the winter, cold, dry winds from Siberia may blow, making conditions very chilly; the low temperature is generally below freezing between November and early March, however the average daytime high is at least a few degrees above freezing in every month except January. Winter is often more drier than summer, with snow falling on average for 37 days.

Between April and early May, the change from cold, dry winter to warm, rainy summer comes swiftly, and there is a comparable sudden return to winter conditions in late October and November. Summers are often hot and humid, with the East Asian monsoon occurring from June to August; these are also the warmest months, with average temperatures ranging from 21 to 25 °C (70 to 77 °F) and daily highs sometimes exceeding 30 °C (86 °F).

Pyongyang is located in North Korea’s west-central region. The city is located on a flat plain approximately 50 kilometers (31 miles) east of Korea Bay, a branch of the Yellow Sea. The Taedong River runs through the city, heading southwest into Korea Bay. The Pyongyang plain, on which the city is located, is one of two great plains on the Korean peninsula’s western coast, the other being the Chaeryong plain. Both cover an area of around 500 square kilometers.

Pyongyang is the industrial heart of North Korea. It was the first industrial city to develop in North Korea following the Korean War, thanks to a wealth of natural resources including as coal, iron, and limestone, as well as efficient land and water transportation infrastructure.

Both light and heavy industries are present and have evolved concurrently. Cement, industrial ceramics, explosives, and weaponry are examples of heavy manufacturing, although mechanical engineering remains the primary sector. Textiles, footwear, and food are among the light industries of Pyongyang and its environs. In fields on the outskirts of the city, special focus is placed on the production and delivery of fresh produce and ancillary crops. Rice, maize, and soybeans are among the other crops grown. Pyongyang’s goal is to become self-sufficient in meat production. Pigs, chickens, and other animals are raised in high-density facilities.

The city is still suffering from a power outage. To address this issue, two power plants, Huichon Power Stations 1 and 2, were constructed in Chagang Province and serve the city through direct transmission lines. In January 2013, the second phase of the power expansion project, consisting of a series of minor dams along the Chongchon River, was begun. The first two power plants have a combined producing capacity of 300 megawatts (MW), while the ten dams planned for the second phase are estimated to produce around 120 MW. Furthermore, the city has numerous current or proposed thermal power plants. These include the Pyongyang TPS, which has a capacity of 500 MW, the East Pyongyang TPS, which has a capacity of 50 MW, and the Kangdong TPS, which is now under development.

Foreign visitors to Pyongyang may join up for the Koryolink mobile phone service. The installation charge for a SIM card and voice service will be $80 or €80. An extra €180 is required to sign up for 3G data. The mobile service costs $8 per month for voice and $14 per month for data. The data plan that comes with the device includes 50M of data. It should be noted that the phone network accessible to foreigners does not communicate with the network used by citizens.

Hotels geared toward foreigners may be able to give Internet connection, but it must be requested ahead of time. If you do not have Internet access and need a connection, the most convenient solution is to visit your embassy.