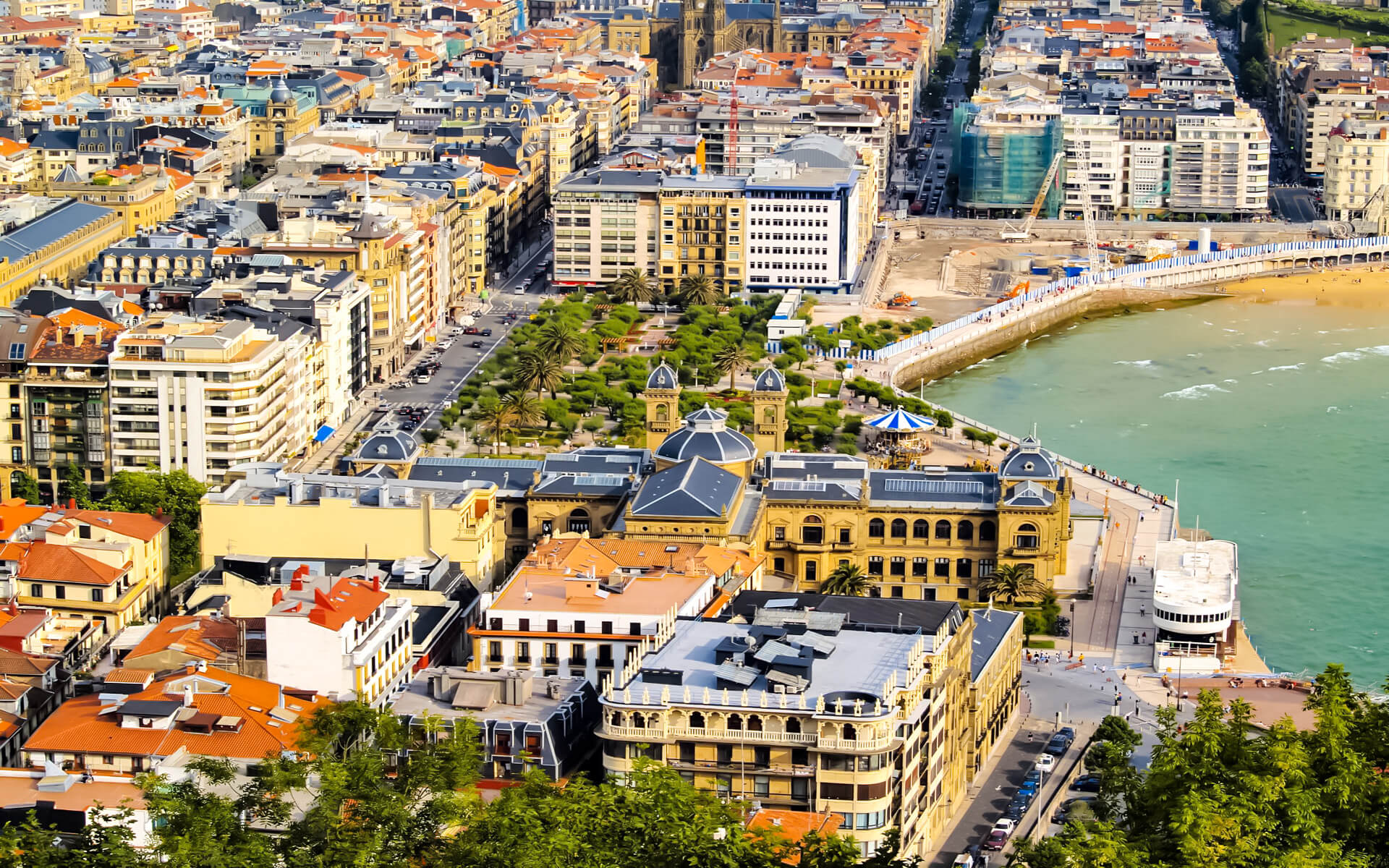 San Sebastián is a city and municipality in Spain’s Basque Autonomous Community. It is located 20 kilometers (12 miles) from the French border on the shore of the Bay of Biscay. The municipality’s population is 186,409, with a metropolitan area population of 436,500. (2010). Locals refer to themselves as donostiarras (singular) in both Spanish and Basque.

Its primary economic activity are business and tourism, and it is one of Spain’s most popular tourist destinations. Despite its small size, events like the San Sebastián International Film Festival have given the city an international flavor. San Sebastián, together with Wrocław, Poland, has been designated as the European Capital of Culture for 2016.

San Sebastian has one of Europe’s greatest in-city beaches. It’s an uncommon sensation to be able to sunbathe and swim right near to big historical structures and churches. There are a lot of surfers here.

The city is modest and quaint, with several seafood restaurants, many beaches, a plethora of pintxos bars, and a variety of trendy clothing stores.

San Sebastián has a vibrant cultural scene, where grass-roots initiatives in various sections of the city, as well as purposeful private and public cooperation, have prepared the way for a diverse variety of opportunities and events catering to the interests of a diverse and select audience. The city was chosen as the European Capital of Culture for 2016 (together with Wroclaw, Poland) with the core slogan “Waves of people’s energy,” which sums up a clear message: people and citizen movements are the true driving force behind transformations and changes in the globe.

All year long, events ranging from traditional city festivals to music, theater, or movie take place, but they flourish especially in the summer. San Sebastián’s Jazz Festival (Jazzaldia), Europe’s longest-running Jazz Festival, takes place in the final week of July. Gigs are held at various locations across the city, sometimes with free entrance. The Musical Fortnight, which runs for at least fifteen days into August and features classical music events, is up next. The San Sebastián International Film Festival, which has been running for more than 50 years and is centered on the Kursaal and the Victoria Eugenia Theatre, takes center stage every September.

The Basque cuisine is well-known across Spain, and many people consider that the greatest food can be found in the Basque Country. San Sebastian and its pubs and restaurants are responsible for much of its renown. Tapas were originated in Andalusia, but they were perfected in San Sebastian, as a tour around the old town before lunchtime with its numerous taverns demonstrates. Each bar is brimming with tapas that seem to be quite delicate. Tapas are often paired with a glass of wine or a small beer, and the Spanish custom encourages having one tapa and a glass of wine at one establishment before moving on to the next. Tapas are a wonderful meal replacement since you pay for each one you eat (roughly €2-4 per), so you may eat as many as you like. If you’re looking for’real’ cuisine, San Sebastian can provide. There are a variety of cuisines available, including Chinese, German, Galician, Italian, and, of course, Basque. You can get the freshest seafood in and around the waterfront, and if you don’t like the modest harbour taverns, head to San Sebastian restaurants with Michelin stars if you have some money to spare.

Tourism Information (North side of the Boulevard separating Old and New Town), +34 943481166. A contemporary, well-staffed information and booking counter.

San Sebastián has an oceanic climate, with warm but not scorching summers and mild but not freezing winters. San Sebastián, like many other cities in this region, often sees gloomy or overcast weather for the most of the year, with occasional precipitation. The city receives around 1,650 mm (65 in) of precipitation each year, which is distributed pretty evenly throughout the year. However, the city is notably drier and sunnier in the summer months, with an average of 100 mm (3.94 in) of precipitation during those months. Temperatures average 8.9 °C (48.0 °F) in January and 21.5 °C (70.7 °F) in August.

The city is located on the southern shore of the Bay of Biscay, in the north of the Basque Country. The gorgeous beachfront of San Sebastián makes it a popular beach resort. The beach setting is reinforced by readily accessible mountainous surrounds, such as Urgull (at the center of the city by the coastline), picturesque Mount Ulia stretching east to Pasaia, Mount Adarra standing proudly far to the south, and Igeldo, which overlooks the bay from the west.

Donostia is located near the mouth of the River Urumea, and was developed to a significant extent over the river’s marshes during the previous two centuries. The city center, as well as the districts of Amara Berri and Riberas de Loiola, are built on such topography and the previous bed of the river, which was redirected to its present canalized route in the first part of the twentieth century.

WiFi hotspots may be found at a café on the Ondarreta beach, as well as in several taverns in the Old City. It is unclear if they are paid or free.

There are several Wi-Fi hotspots across the city, which are identified by a white Wi-Fi icon on street signs. These are available for free.