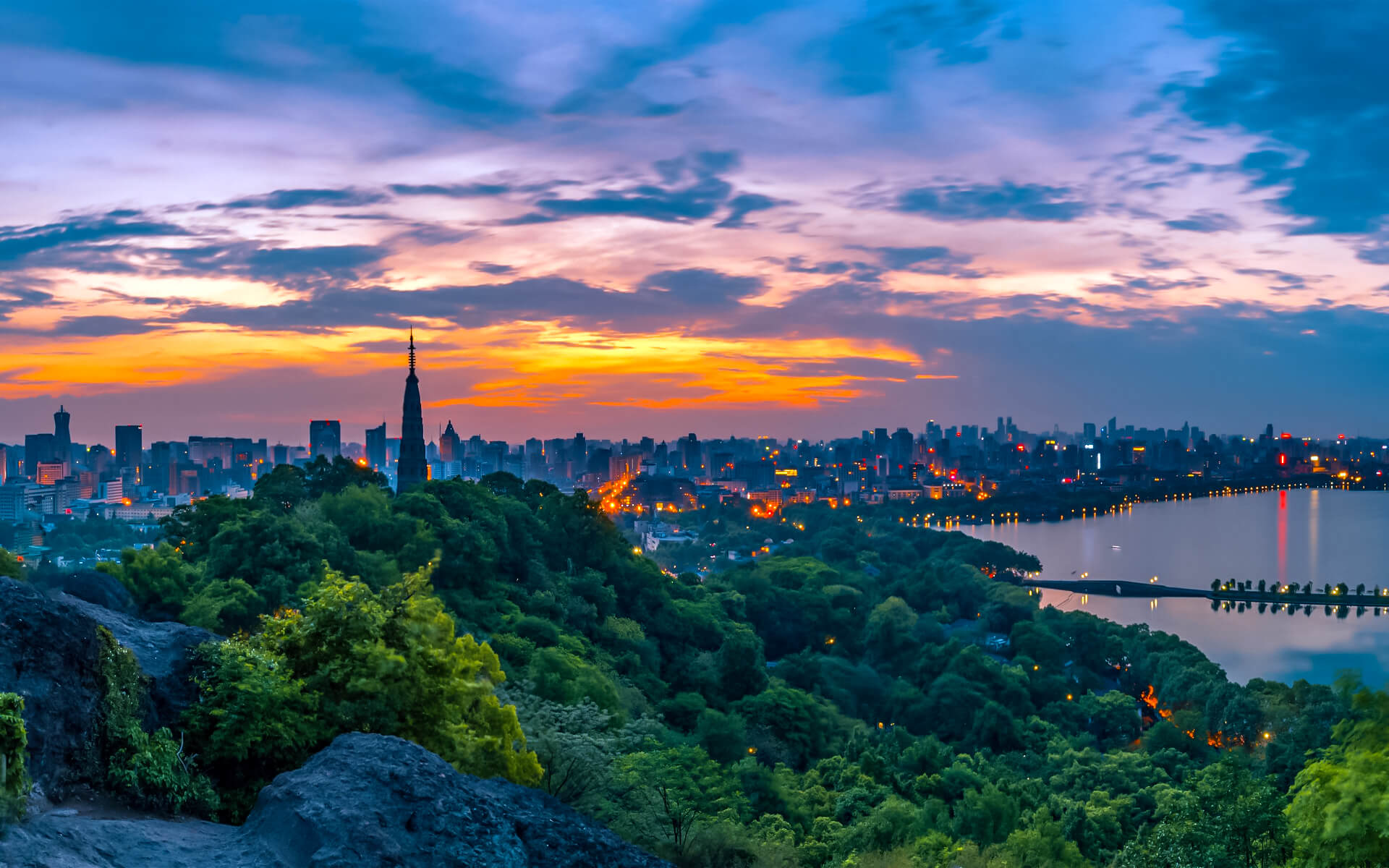 How To Travel To Hangzhou

How To Get Around In Hangzhou

Hangzhou, traditionally romanized as Hangchow, is the capital and largest city of Zhejiang Province in eastern China. It is located near the mouth of Hangzhou Bay, which connects Shanghai and Ningbo. Hangzhou rose to prominence as the southern terminal of the Grand Canal and has been one of China’s most known and rich towns for most of the past millennium, thanks in part to its stunning natural environment. The city’s most well-known attraction is West Lake.

Hangzhou is a sub-provincial city that serves as the hub of the Hangzhou metropolitan region, China’s fourth-largest. During the 2010 Chinese census, the metropolitan area had a population of 21.102 million people spread over an area of 34,585 km2 (13,353 sq mi). In 2015, the recorded population of Hangzhou prefecture was 9,018,000 people.

Hangzhou is well-known for its ancient artifacts as well as its natural beauty. It is regarded as one of the most beautiful cities in China, as well as one of the most picturesque. Despite numerous recent urban developments, Hangzhou has retained its historical and cultural legacy. Tourism is still a key part of the Hangzhou economy today. West Lake, a UNESCO World Heritage Site, is one of Hangzhou’s most popular attractions. The West Lake Cultural Landscape encompasses 3,323 hectares (8,210 acres) and contains some of Hangzhou’s most significant historic and picturesque sites. A gorgeous region next to the lake features ancient pagodas, cultural monuments, and the natural beauty of the lake and hills, notably Phoenix Mountain. The lake is crossed by two causeways.

The Hangzhou Tourism Commission launched the ‘Modern Marco Polo’ campaign on Facebook in March 2013. Over the following year, approximately 26,000 people from all over the world applied to be Hangzhou’s first international tourist ambassador. On May 20, 2014, Liam Bates was declared as the victorious winner during a press conference in Hangzhou. The 26-year-old was awarded a €40,000 contract and is the only foreigner ever assigned to such an official position by the Chinese government.

Hangzhou has a humid subtropical climate with four distinct seasons, with lengthy, extremely hot, humid summers and cool, gloomy, and drier winters (with occasional snow). The average yearly temperature is 17.0 degrees Celsius (62.6 degrees Fahrenheit), with monthly daily averages ranging from 4.6 degrees Celsius (40.3 degrees Fahrenheit) in January to 28.9 degrees Celsius (84.0 degrees Fahrenheit) in July. The city gets an average yearly rainfall of 1,438.0 mm (56.6 in) and is impacted by the Asian monsoon plum showers in June. Hangzhou experiences typhoon storms in the late summer (August to September), however they seldom hit the city directly. They often make landfall around Zhejiang’s southern coast, bringing high winds and heavy rainfall. Since 1951, extremes have varied from 9.6 °C (15 °F) on 6 February 1969 to 41.6 °C (107 °F) on 9 August 2013; unofficial measurements have reached 10.5 °C (13 °F) on 29 December 1912 and 24 January 1916, and 42.1 °C (108 °F) on 10 August 1930. The city gets 1,709.4 hours of sunlight per year, with monthly percent potential sunshine ranging from 30% in March to 51% in August.

Hangzhou is situated in northwestern Zhejiang province, near the southern end of China’s Grand Canal, which stretches from Shanghai to Beijing, in the Yangtze River Delta’s south-central region. Its administrative territory (sub-provincial city) stretches west to Anhui province’s hilly areas and east to the coastal plain near Hangzhou Bay. The city core is centered on the eastern and northern shores of West Lake, just north of the Qiantang River.

Hangzhou’s economy has grown quickly since its opening in 1992. It is an industrial city with a wide range of industries including light manufacturing, agriculture, and textiles. It is regarded as a vital industrial base and logistical center for coastal China.

The local language in Hangzhou is Wu Chinese (now generally known as Shanghainese, although each city has a different variant). It is spoken in a fairly large area covering most of eastern China. Wu cannot be understood with either Mandarin (standard Chinese) or other Chinese dialects. However, like everywhere else in China, most people are bilingual, that is, they speak both the local dialect and Mandarin, and like other prosperous coastal cities, Hangzhou has many immigrants from other provinces who speak Mandarin but not the local dialect. If you speak Mandarin, you can talk to almost everyone in Hangzhou, except for a few elderly people or people from the countryside.

English is not widely spoken, although the more expensive hotels probably have staff who speak at least some English. Have the names of your destinations in Chinese handy to show to cab drivers so they can take you where you want to go. Carry a business card of your hotel so that you can return to it at any time.

Buy maps near the train or bus station, from street vendors or stalls, when you arrive. The price is often indicated on the cards themselves, in case you were wondering how much you should pay (less than ¥10). Cards bought on the street are usually written in simplified Chinese and without pinyin. You can find pinyin cards in foreign language bookstores and newsstands near the western lake. The main foreign language bookstore on Yan An Road has a reasonable selection of maps and travel books.

Recently, there is a tourist office stand near Wulin Square subway station, where you can get a city map in two languages. If you walk past Hangzhou Tower and head south until you reach Shuguang Road, you should see an olive green booth. Very little English is spoken, but if you can ask for a map (dìtú), they will gladly help you.

How To Travel To Hangzhou

BY PLAIN Hangzhou Xiaoshan International Airport offers domestic and international flights. There are regular connections to Beijing, Hong Kong and other Chinese cities. The only European destination is Amsterdam with KLM. There are a few cities in other parts of East Asia and Southeast Asia with direct connections. Hangzhou airport has...

How To Get Around In Hangzhou

BY BUS Hangzhou has an extensive bus system, and the schedules, routes and announcements on the buses are all in Chinese. Cabs in Hangzhou are notoriously expensive compared to other Chinese cities, and the public bus system will save you money. There are several types of buses: Lines without an alphabetical prefix...

West Lake (西湖 Xī Hú) The most famous site in Hangzhou. Technically, there are 10 western lake scenes and 10 new scenes, but they are overrated and often seasonal (snowfall on the broken bridge, etc.). Rather than checklisting and going back and forth to find them, just spend a clear...

Things To Do In Hangzhou

West Lake Impression (印象西湖). 7:30 pm (winter), a love story directed by Zhang Yimou's golden trio and performed on the lake with impressive special effects. Each night there are two performances. Entertaining, but not mind-blowing, especially if you've seen some of the more recent "Impressions" shows. Admission prices start...

Hangzhou is one of the best places to eat in China, and the local cuisine is characterized by pork and seafood dishes rather than beef and lamb, typically found in the northern and western regions of China. Typical Hangzhou specialties include leongpo rou, a piece of extremely fatty pork in...

The drink of choice in Hangzhou is tea, as the local Longjing (龙井, also called Lung Ching, literally "dragon fountain") is the most famous green tea in China. Longjing is divided into seven classes, the top two of which are Superior (旗枪 qiqiang) and Special (雀舌 queshe), with the...

Hangzhou China Silk Town on Tiyuchang Road. You can also buy silk in other places in the city, but most of the time it is only the fabric. The store is open from 08:00 to 17:00 and is located near the Zhejiang International Hotel. Assiduous shopping!Night market (夜市) on...

As far as bars go, Nanshan Road should keep all visitors busy all night. Shuguang Road, an up-and-coming neighborhood, has several old and new bars that are a bit less hectic than those on Nanshan Road, including Maya Bar, the sold-out You To, the rock music bar Travellers and...