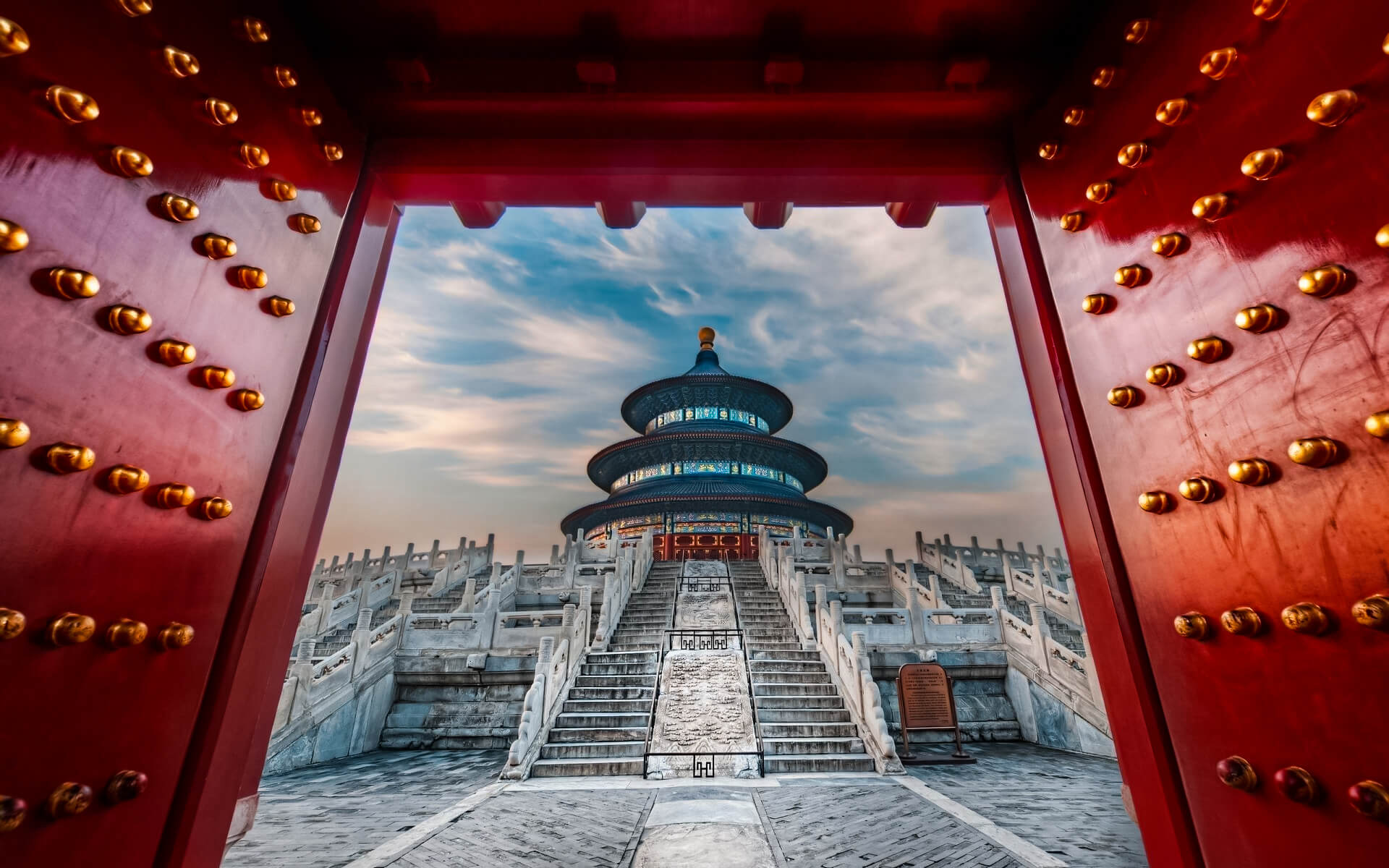 Beijing is the People’s Republic of China’s capital and one of the world’s most populated cities.

With the exception of neighboring Tianjin Municipality to the southeast, Beijing Municipality is surrounded by Hebei Province; the three divisions create the Jingjinji metropolitan area and China’s national capital region.

It houses the headquarters of the majority of China’s top state-owned enterprises and serves as a significant hub for the country’s roadway, expressway, railway, and high-speed rail networks. Beijing Capital International Airport is the world’s second busiest in terms of passenger traffic.

The history of the city extends back three millennia. Beijing, the last of China’s Four Great Ancient Capitals, has served as the country’s political hub for most of the previous eight centuries.

The city is famous for its luxurious palaces, temples, parks, gardens, tombs, walls, and gates, and its art treasures and colleges have made it a cultural and artistic hub in China.

It was the residence of the Ming and Qing dynasties’ emperors until the establishment of a republic in 1911. Beijing is the country’s political, educational, and cultural hub, and as such it is rich in historical landmarks as well as key government and cultural organizations.

The city is well-known for its flatness and uniform architecture. Within the city borders, there are just three hills (in Jingshan Park to the north of the famous Forbidden City). Beijing, like the Forbidden City, features concentric “ring roads” that are really rectangular and wrap around the city.

Beijing is a fast-paced, ever-changing metropolis. There is a combination of old and modern everywhere (especially within the 3rd and 2nd Ring Roads). Here, the most cutting-edge, boundary-pushing technology and social advances collide with the most ancient cultural norms and social contexts. The folks here may seem frigid at first, but after you break the ice, you will discover that they are quite pleasant and engaging.

The Forbidden City, the massive palace complex that was the residence of the emperors of the Ming and Qing dynasties, is located in the historical core of Beijing. The Forbidden City houses the Palace Museum, which houses imperial collections of Chinese art. Several old imperial gardens, parks, and picturesque regions, including Beihai, Shichahai, Zhongnanhai, Jingshan, and Zhongshan, surround the Forbidden City. These locations, notably Beihai Park, have been recognized as masterpieces of Chinese gardening art and are famous tourist sites with significant historical significance. Zhongnanhai has also been the political heart of successive Chinese administrations and regimes in the modern period, and it is presently the headquarters of the Communist Party of China and the State Council.

Several famous landmarks are located just across the Forbidden City from Tiananmen Square, including the Tiananmen, Qianmen, the Great Hall of the People, the National Museum of China, the Monument to the People’s Heroes, and the Mausoleum of Mao Zedong. The Summer Palace and the Old Summer Palace, both located on the city’s western outskirts, comprise a comprehensive collection of imperial gardens and buildings that served as summer homes for the Qing royal family.

The Temple of Heaven (Tiantan), situated in southern Beijing and also a UNESCO World Heritage Site, is one of the city’s most well-known religious buildings, where monarchs of the Ming and Qing dynasties visited for yearly rites of prayers to Heaven for a successful crop. The Temple of Earth (Ditan) is located in the city’s north, while the Temple of the Sun (Ritan) and the Temple of the Moon (Yuetan) are located in the city’s east and west, respectively. Dongyue Temple, Tanzhe Temple, Miaoying Temple, White Cloud Temple, Yonghe Temple, Fayuan Temple, Wanshou Temple, and Big Bell Temple are among the other well-known temples. There is also a Confucius Temple and a Guozijian, or Imperial Academy, in the city. The Cathedral of the Immaculate Conception, which was established in 1605, is Beijing’s oldest Catholic church. The Niujie Mosque is Beijing’s oldest mosque, having a history dating back over a thousand years.

Beijing has numerous well-preserved pagodas and stone pagodas, including the tall Pagoda of Tianning Temple, which was erected between 1100 and 1120 during the Liao Dynasty, and the Pagoda of Cishou Temple, which was established in 1576 during the Ming Dynasty. Stone bridges of historical significance include the 12th-century Lugou Bridge, the 17th-century Baliqiao Bridge, and the 18th-century Jade Belt Bridge. Pre-telescopic spheres from the Ming and Qing periods are on exhibit at the Beijing Ancient Observatory. The Fragrant Hills (Xiangshan) is a well-known picturesque public park that includes natural landscaped areas as well as traditional and cultural artifacts. The Beijing Botanical Area has about 6,000 plant species, including a wide range of trees, shrubs, and flowers, as well as a large peony garden. Some of the city’s prominent recreational parks are Taoranting, Longtan, Chaoyang, Haidian, Milu Yuan, and Zizhu Yuan. The Beijing Zoo is a zoological research facility that houses uncommon creatures from all over the world, including the Chinese giant panda.

The Thirteen Tombs of the Ming Dynasty, the sumptuous and complex burial places of thirteen Ming emperors that have been listed as part of the UNESCO World Heritage Site Imperial Tombs of the Ming and Qing Dynasties, are located on the outskirts of downtown Beijing but inside its municipality.

In metropolitan Beijing, three architectural types predominate. The first is classic imperial Chinese architecture, arguably best typified by the huge Tian’anmen (Gate of Heavenly Peace), which remains the People’s Republic of China’s signature building, the Forbidden City, the Imperial Ancestral Temple, and the Temple of Heaven.

Beijing has a rich and diversified religious legacy, with Daoism, Buddhism, Confucianism, Islam, and Christianity all having major historical presences in the city.

Beijing has a humid continental monsoon climate, with increased humidity in the summers owing to the East Asian monsoon and colder, windier, drier winters due to the effect of the enormous Siberian anticyclone.

Sandstorms blowing in from the Gobi Desert over the Mongolian steppe in the spring, followed by fast warming but mainly dry weather.

Autumn, like spring, is a transitional season with little precipitation.

Beijing is located at the northern extremity of the roughly triangular North China Plain, which extends to the city’s south and east. The city and northern China’s agricultural heartland are protected from the approaching desert steppes by mountains to the north, northwest, and west. The Jundu Mountains dominate the northern half of the municipality, particularly Yanqing County and Huairou District, while the Western Hills frame the western part. To guard against nomadic raids from the steppes, the Great Wall of China was erected across the northern section of Beijing Municipality on the rough terrain. Mount Dongling, located in the Western Hills near the border with Hebei, is the municipality’s highest peak, rising 2,303 meters above sea level (7,556 ft).

The major rivers that go through the township, including the Chaobai, Yongding, and Juma, are all tributaries of the Hai River system and flow southeast. The Miyun Reservoir, located on the upper reaches of the Chaobai River, is the municipality’s major reservoir. Beijing is also the northern end of the Grand Canal to Hangzhou, which was created as a transportation route over 1,400 years ago, and the South–North Water Transfer Project, which was completed in the last decade to deliver water from the Yangtze River basin.

The Beijing urban area, located on the plains in the municipality’s south-central lowlands at an elevation of 40–60 m, covers a relatively modest but growing share of the municipality’s land area. The city is divided by concentric ring roads. The Second Ring Road follows the route of the historic city walls, while the Sixth Ring Road links satellite towns in the surrounding suburbs. Tian’anmen and Tian’anmen Square are located in the heart of Beijing, right south of the Forbidden City, the historic palace of China’s emperors. Zhongnanhai, China’s current leaders’ house, is located to the west of Tian’anmen. Chang’an Avenue, which connects Tiananmen Square with the Square, is the city’s primary east-west axis.

Beijing’s economy is one of China’s most developed and rich.

Beijing has more Fortune Global 500 Company headquarters in 2013 than any other city in the world, owing to the concentration of state-owned firms in the national capital.

In addition, behind Moscow, New York, and Hong Kong, the city ranks fourth in terms of the number of billionaires living there. PricewaterhouseCoopers ranked Beijing’s total economic impact as the highest in China in 2012.

The city’s economy is post-industrial, with the tertiary sector (services) accounting for 76.9 percent of production, followed by the secondary sector (manufacturing, construction) at 22.2 percent and the primary sector (agricultural, mining) at 0.8 percent.

Industry remained the single biggest sub-sector, accounting for 18.1 percent of total production in 2013. Since 2010, when the city stated that 140 high-polluting, energy- and water-intensive firms will be evacuated from the city in five years, the balance of industrial output has shifted dramatically. Capital Steel began relocating to nearby Hebei province in 2005. Automobile, aerospace, semiconductor, pharmaceutical, and food processing production all grew in 2013.

Costa Coffee, Charlie Brown Café, Starbucks (once a pin is issued to your cell phone), McDonald’s (30 minute time restriction after registration), and many more small independent cafés offer free WiFi. From the outside, these cafés may seem to be restaurants, yet almost any business labeled a café will offer WiFi. WiFi is also widely available in hostels and hotels. The vast majority of such wifi connections are shaky and unreliable. If having access to the Internet is crucial to you, look for an AirBnB property with decent wifi.