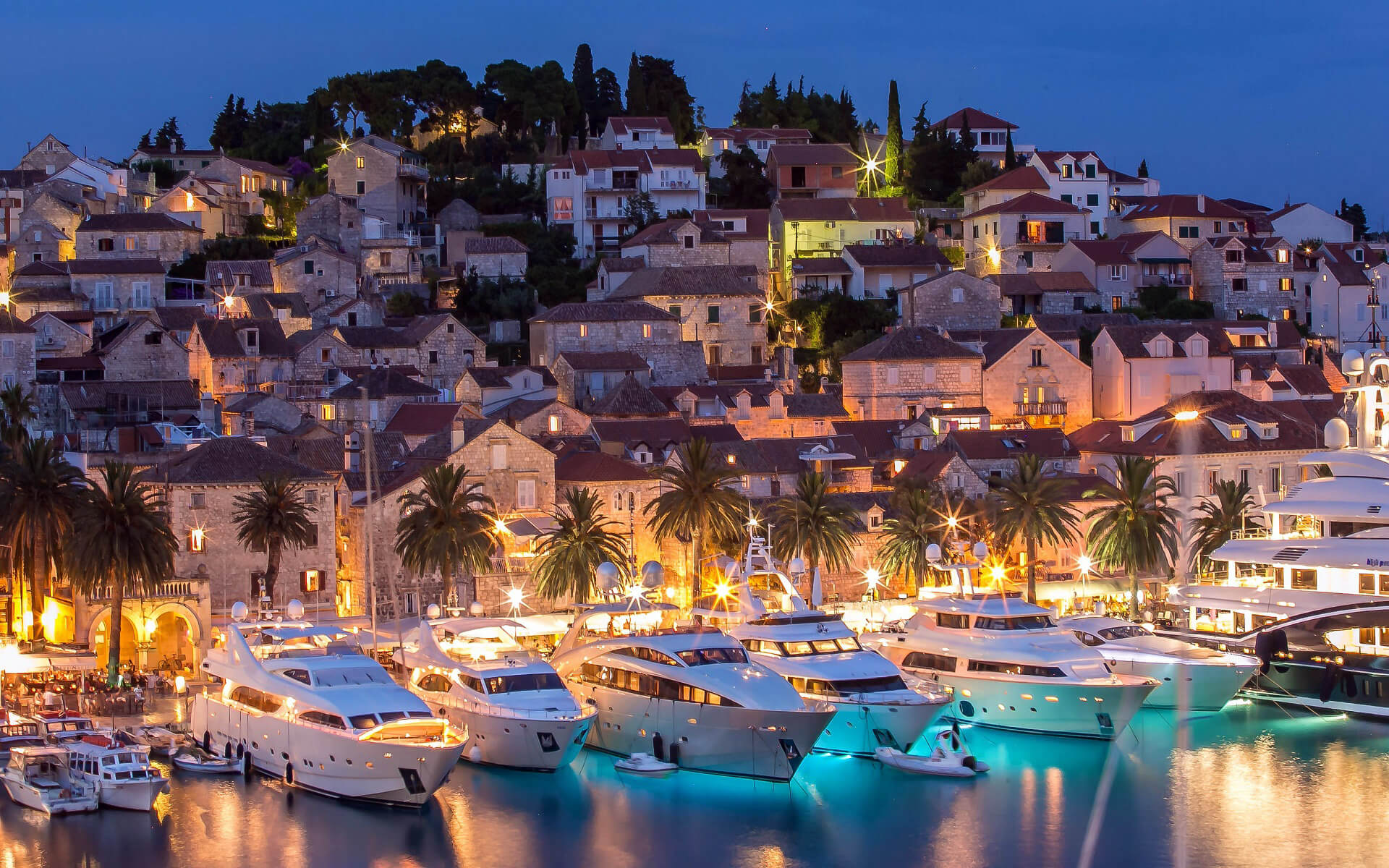 Hvar is a Croatian Adriatic Sea island situated off the Dalmatian coast, between the islands of Bra, Vis, and Korula. The island of Hvar, which is about 68 kilometers (42.25 miles) long and has a steep east-west ridge of Mesozoic limestone and dolomite, is remarkable in the vicinity for having a wide fertile coastal plain and fresh water springs. With the agricultural sections, its slopes are covered in pine woods, with vineyards, olive groves, fruit orchards, and lavender fields. The climate is defined by moderate winters and sunny summers with plenty of sunlight. The island has 11,103 inhabitants, making it the fourth most populous of Croatia’s islands.

Hvar’s central position on the Adriatic sailing lanes has long made it a vital base for dominating commerce up and down the Adriatic, over to Italy, and across the Mediterranean. It has been inhabited from prehistoric times, first by a Neolithic tribe whose peculiar pottery gave birth to the name Hvar culture, then by the Illyrians. In 384 BC, the ancient Greeks established the colony of Pharos on the location of today’s Stari Grad, making it one of Europe’s oldest settlements. They were also in charge of establishing the agricultural field divisions of the Stari Grad Plain, which is now a UNESCO World Heritage Site. Hvar (city) came to prominence in the Venetian Empire as a key naval station throughout the Middle Ages. Prosperity brought culture and the arts, including one of Europe’s earliest public theaters, lords’ palaces, and several excellent community structures.

With the Hvar Rebellion, coastal incursions by pirates, and the Ottoman army from the mainland, the 16th century was a turbulent period, resulting in some remarkable fortified houses on the northern shore to defend the local inhabitants. After a short period under Napoleonic administration, the island was absorbed by the Austrian Empire, ushering in a more tranquil and wealthy period. Harbours were widened, quays were erected, and fishing and boat construction companies flourished along the coast. At the same period, the island’s wine exports surged, as did production of lavender and rosemary for the French perfume business. Unfortunately, this affluence did not last into the twentieth century, as wooden sailing vessels became obsolete and the phylloxera scourge decimated wine production. Many islanders have fled to start new lives abroad.

One sector, on the other hand, has grown and is now a considerable contribution to the island’s economy. The founding of The Hygienic Association of Hvar in 1868 for the benefit of island tourists has been essential in the development of an infrastructure of hotels, residences, restaurants, marinas, museums, galleries, and cafés. Today, the island of Hvar is a famous tourist destination.

Hvar is a Croatian island off the coast.

Gently rolling hills painted a brilliant purple by the fertile flowers, lush vineyards nestled at the foot of ragged mountains, gorgeous beaches with tiny inlets and secluded coves, luscious restaurants, boutiques, and a vibrant nightlife amidst the medieval streets of Hvar Town are just a few of the delights to be found on this dream of an island.

Imposing defenses loom above the flowing mix of grey stone and orange cascading roofs. The ruins of fortifications erected by a long list of conquerors fall into the broad promenade skirting the magnificent blue sea and the small fishing port. The marble alleys lead to one of Dalmatia’s major squares, Trg Sveti Stjepana, as well as the valued Cathedral of St. Stjepan and the Renaissance theatre.

Hvar Town is the most beautiful town on the island, but Stari Grad, Croatia’s oldest city, and Jelsa, as well as a sprinkling of little towns dotting the shore or lying in the verdant interior, are all worth a visit.

Island Hvar, and notably Hvar town, is one of the most popular Adriatic getaways. During the season (May to September), it may become extremely crowded, particularly in August when many Italians arrive. Hvar was very inexpensive, lacked considerable tourist infrastructure, and drew a large number of young people. However, this is changing as huge five-star hotels are developed and Croatia’s level of living rises.

Stari Grad, a historical village on the island’s north shore, is a UNESCO World Heritage Site.

Hvar’s climate is distinguished by mild winters and pleasant summers. The annual average air temperature is 16 °C (61 °F), the town of Hvar receives 703 millimetres (27.7 in) of precipitation every year, and the town receives a total of 2800 sunlight hours per year. In contrast, Hvar enjoys 7.7 sunlight hours per day, whereas Dubrovnik has 7.2. The average sea temperature ranges from 14 degrees Celsius (57 degrees Fahrenheit) in February to 27 degrees Celsius (81 degrees Fahrenheit) in July. This climate’s Köppen Climate Classification subtype is “Csa” (Mediterranean Climate).

The island of Hvar is located in the Adriatic Sea, off the Dalmatian coast. To the north, the island of Brač lies across the Hvar Channel (Hvarski kanal), to the west is Vis, separated by the Vis Channel, and to the south Korčula lies across the Korčula Channel, while the PelješacPeninsula is across the Neretva Channel. The eastern end of Hvar is just 6 kilometres (3.7 mi) from the mainland. Along the southern coast of the island there are several smaller islands, notably the Paklinski islands at the western end and Šćedro island, while Zečevo island lies off the north coast.

Hvar’s residents mostly work in the fishing and tourist sectors. Hvar has a fairly warm Mediterranean temperature, gorgeous beaches, and Mediterranean vegetation, making it one of Europe’s most appealing tourist destinations. With around 2715 hours of sunshine each year, the island bills itself as “the sunniest location in Europe.”

The primary tourist destination is Hvar town. It has a big public area that is exposed to the sea (St Stephen’s Square/trg Sv. Stjepana). The harbor is packed with huge yachts during the tourist season. All-night discos, such as Veneranda, one of Europe’s major open-air party locations, draw big groups of young people.

Another significant economic activity is the cultivation of lavender, which is used to make fragrant oils and soaps. Hvar is frequently referred to as the “Lavender Island.”

Hvar is also one of Croatia’s two most well-known winemaking regions. Vineyards on the island’s southern coast are well-known for their red wines made from the Plavac Mali grape. White wines are renowned in the middle plain between Stari Grad and Jelsa.