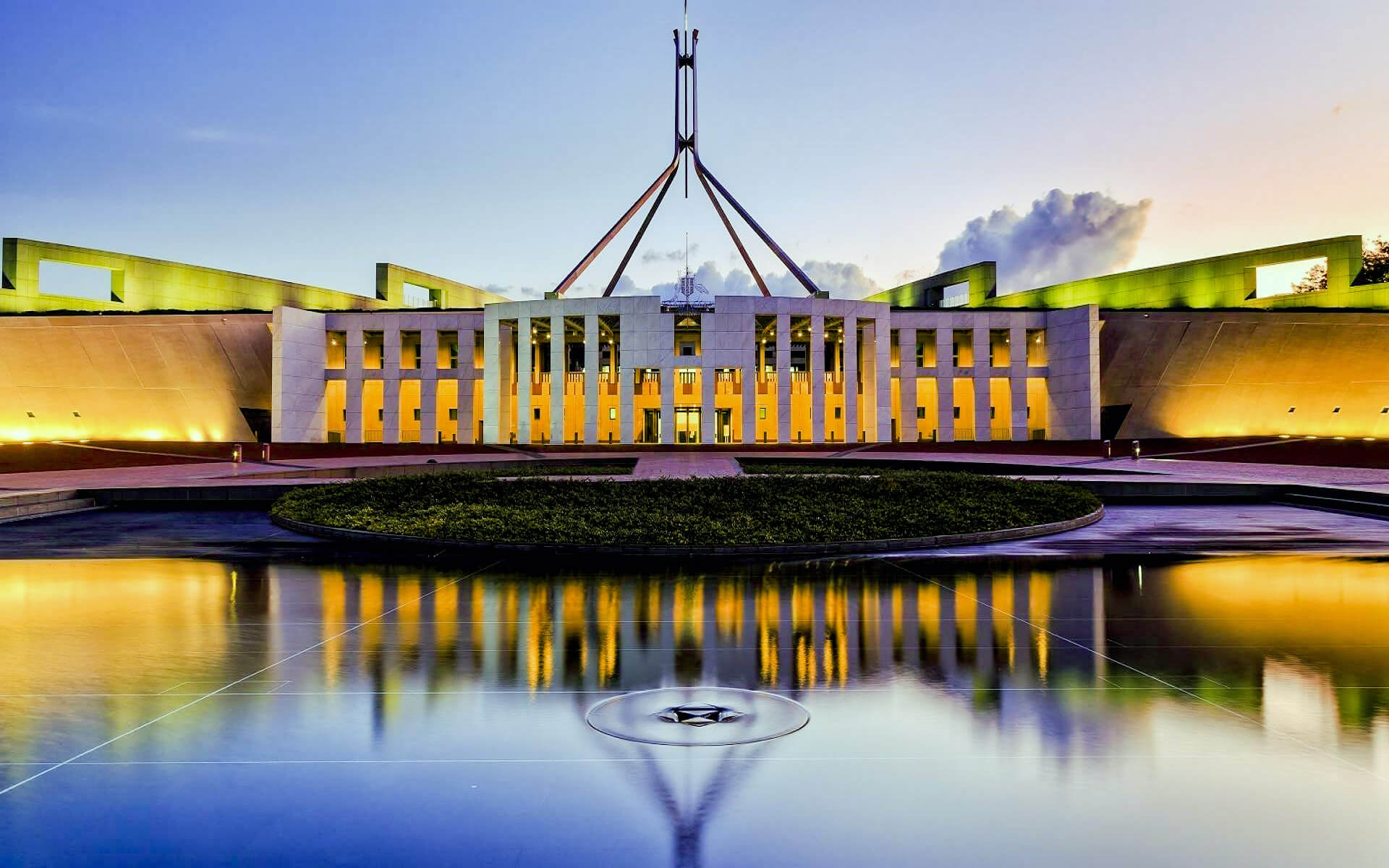 Canberra is Australia’s capital city. It is Australia’s biggest inland city and the eighth-largest city overall, with a population of 381,488. The city is situated in the Australian Capital Territory (ACT), 280 kilometers (170 miles) south-west of Sydney and 660 kilometers (410 miles) north-east of Melbourne. A Canberran is referred to as a “Canberran.”

Canberra was chosen as the site for the nation’s capital in 1908 as a compromise between Australia’s two major cities, Sydney and Melbourne. It is unique among Australian cities in that it is a completely planned city outside of any state, analogous to Washington, D.C. in the United States or Brasilia in Brazil. Following an international design competition, a layout by Chicago architects Walter Burley Griffin and Marion Mahony Griffin was chosen, and building began in 1913. The Griffins’ design included geometric elements including circles, hexagons, and triangles, and was centered on axes aligned with major topographical points in the Australian Capital Territory.

The garden city concept impacted the city’s architecture, which features considerable amounts of natural vegetation, earning Canberra the nickname “bush capital.” Canberra’s growth and development were hampered by World Wars and the Great Depression, which worsened a series of planning conflicts and the ineffectiveness of a succession of agencies formed un turn to manage the city’s development. Following World War II, Prime Minister Sir Robert Menzies championed its development, and the National Capital Development Commission was established with executive powers. Despite the fact that the Australian Capital Territory is now self-governing, the Commonwealth Government maintains considerable control through the National Capital Authority.

The ACT is autonomous of any state in order to prevent any one state from acquiring an advantage by hosting the Commonwealth’s seat of power. The ACT, like the states, has voting representation in the Commonwealth Parliament as well as its own autonomous Legislative Assembly and administration.

Because the city has a high concentration of public personnel, the Commonwealth Government provides the greatest percentage of Gross State Product and is the city’s biggest single employer, albeit it is no longer the majority employer. The unemployment rate is lower and the average income is greater than the national average; tertiary education levels are higher, and the population is younger. Property prices are quite expensive, owing in part to rather tight development laws.

Canberra is Australia’s purpose-built capital city, situated in the Australian Capital Territory to the south-east of New South Wales. It is a planned city with national monuments, museums, and galleries centered around big man-made lakes. Canberra, being a bush capital, is also a terrific area to enjoy the outdoors, with superb cycling, gardening, parks, bushwalking, and natural reserves.

The Captain James Cook Memorial and the National Carillon are located on Lake Burley Griffin. The Black Mountain Tower, the Australian National Botanic Gardens, the National Zoo and Aquarium, the National Dinosaur Museum, and Questacon – the National Science and Technology Centre are well worth a visit.

Canberra and Region Visitors Centre, 330 Northbourne Ave,  +61 2 6205-0044, e-mail: [email protected] 9am-5pm M-F; 9am-4pm Sa-Su. On Northbourne Avenue, the primary thoroughfare from Sydney to Canberra, the ACT Government runs a comprehensive visitors center. If you are travelling into Canberra from the north, you will pass through the Dickson area. It gives information on Canberra’s attractions and allows personnel to arrange lodging as well as tickets to local events. During the warmer months (Dec-Feb), they also install a booth on the Ground floor of Canberra Centre to provide similar services to visitors inside Civic.

During the summer months, Canberra may be just as hot as everywhere else in Australia, with temperatures reaching 30°C on a regular basis from December to March. Because of its height and closeness to the Snowy Mountains, it may turn severely cold during the winter months (June–August). In the winter, overnight temperatures regularly fall below zero while daytime temperatures tend to stay just over 10°C. It is, however, generally a bright, sharp cold, rather than a sluggish, wet cold. It practically never snows in Canberra since the low temperatures (at night) are accompanied by clear sky. The nicest weather in Canberra, according to most Canberrans, is in late autumn (mid-April to May).

Canberra has a lower humidity level than Australia’s coastal cities. The warmest days are often relieved by pleasant, cooling mountain breezes, especially at the end of the day, and the temperature lowers overnight. When coming in the summer, it’s a good idea to carry a light pullover or coat since the evenings may be pleasantly cold.

There are suburbs that encircle downtown Canberra, as well as suburbs that surround many regional town centers. Belconnen and Gungahlin are to the north, while Molonglo Valley, Tuggeranong, and Woden are to the south. The ACT also contains adjacent towns, such as Murrumbateman, which offers a good assortment of cold climate wines. The ancient settlements of Hall and Tharwa are also on Canberra’s outskirts.

In May 2012, Canberra’s unemployment rate was 3.4 percent, which was lower than the national average of 5.1 percent. Canberra has the greatest average level of discretionary income of any Australian capital city due to low unemployment and considerable levels of public sector and commercial employment. Canberra’s gross weekly pay is $1702, compared to the national average of $1485.80. (May 2013).

Canberra’s median home price in September 2009 was $511,820, lower than only Sydney among capital cities with populations more than 100,000 people, having overtaken Melbourne and Perth since 2005. Canberra inhabitants pay a higher median weekly rent than residents of any other state or territory. Canberra’s typical unit rent was $410 per week and median dwelling rent was $460 in January 2014, ranking the city third most expensive in the nation. Higher average weekly wages, limited land availability, and inflationary elements in the ACT Residential Tenancies Act are all factors contributing to this higher weekly rental market.

Public administration and safety are the city’s primary industries, accounting for 29.8 percent of Gross Territory Product in 2011–12 and employing 33.9 percent of Canberra’s workforce. Many Australian Public Service agencies have their headquarters in Canberra, and the city also houses several Australian Defence Force establishments, including the Australian Defence Force headquarters and HMAS Harman, a naval communications center that is being converted into a tri-service, multi-user depot.

The former RAAF Fairbairn facility, next to Canberra Airport, was sold to the airport’s operators, however the site is still utilized for RAAF VIP flights. Tower Software and RuleBurst are two of the software firms who have set up shop in Canberra to take advantage of the concentration of government clients. A coalition of private and public investors is now developing plans for a billion-dollar data hub in Canberra, with the goal of making the city a prominent center of such activity in the Asia-Pacific region.

Through the ACT Government’s CBRfree service, free wifi is accessible in Civic and several other districts of Canberra.

On 40 computer terminals, the National Library of Australia offers free Wi-Fi and internet access (webmail is blocked on some computers, so ask the staff to show you which ones you can access webmail from).

Wi-Fi and laptops are available at all ACT public library branches. To use the computers, you must be a member or provide identification that you are not a resident of the ACT, and you may need to reserve a few hours ahead of time owing to high demand.

McDonald’s outlets in Australia provide free Wi-Fi with no purchase necessary. The eateries in Civic are located at the following intersections: East Row and Alinga Street, and Cooyong Street and Northbourne Avenue.

The Pancake Parlour at Civic (in the Sydney Building, near bus bay 4) has free Wi-Fi and power outlets at various tables.