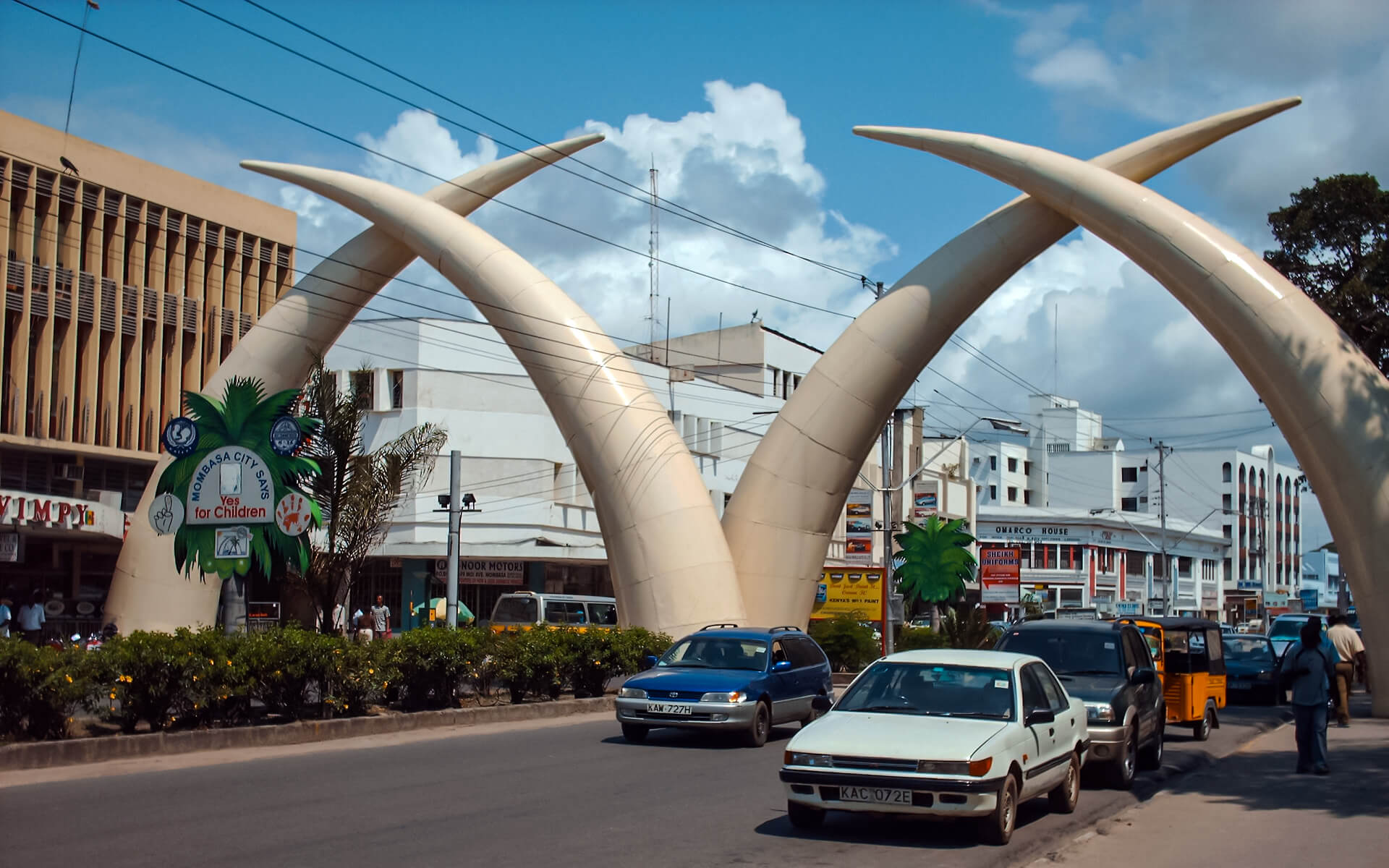 Mombasa is a city on Kenya’s coast. With a population of 1.2 million people in 2014, it is the country’s second-largest metropolis after Nairobi, Kenya’s capital.

Mombasa is a regional cultural and commercial center with an extra-large port and international airport, as well as a major regional tourist destination. Mombasa is a historical commercial center on the east coast of Kenya, in Mombasa County and the old Coast Province. Its position on the Indian Ocean made it a historical trading center, and because of its strategic location, it has been ruled by numerous governments.

It is situated on Mombasa Island and extends to the mainlands around it. Two waterways, Tudor Creek and Kilindini Harbour, divide the island from the mainland. The Nyali Bridge connects it to the mainland to the north, the Likoni Ferry to the south, and the Makupa Causeway to the west, where the Kenya-Uganda Railway runs alongside. Kenya and the interior nations benefit from the port, which connects them to the sea. Moi International Airport, near the northwest mainland suburb of Chaani, serves the city.

Mombasa has a diverse population, with Swahili and Mijikenda peoples predominating. The Akamba and Taita Bantus, as well as a considerable population of Luo and Luhya peoples from Western Kenya, are among the other groups. Islam, Christianity, and Hinduism are the three primary faiths prevalent in the city. Many immigrants and merchants from the Middle East, Somalia, and the Indian subcontinent have settled in Mombasa throughout the years, mostly as dealers and skilled artisans.

Kenya’s biggest tourism attraction is Mombasa. It is located on Kenya’s eastern coast, facing the Indian Ocean, and its beaches have made it a famous tourist destination. Mombasa is known for its rich marine life, world-class hotels, and welcoming environment. It has a tropical climate all year and is a fantastic location with activities for people of all ages.

Mombasa has been governed by the Portuguese, Arabs, and British from its founding in the 16th century. The city’s culture is still influenced by its history. Historical remains such as Fort Jesus and the Old Town are popular tourist destinations in Mombasa.

Mvita, the city’s heart, is an island in a river delta, accessible from the north by bridges and from the south by round-the-clock boats. It is a fairly multicultural city, and you may witness Muslims wearing the niqab (called locally as “bui bui”) and Giryama people wearing nearly nothing at the same time and in the same area.

It is the only town in the nation that possesses both city and county status, along with Nairobi.

The climate is tropical, with a major rainy season from mid-April to late-May and a small rainy season from October to November. Summer in the Southern Hemisphere occurs between January and March, with temperatures above +32°C. The temperature fluctuation is rather minor at 4° south of the Equator.

Mombasa has a flat landscape due to its location as a beach town. Mombasa is located on Mombasa Island, although it also stretches to the mainland. Two creeks, Port Reitz in the south and Tudor Creek in the north, divide the island from the mainland.

The Kilindini Harbour, Kenya’s sole big seaport, is located in Mombasa, a major trading center. Kilindini is a Swahili word that means “deep.” The port’s name comes from the fact that the canal is naturally quite deep. Kilindini Harbor is an example of a ria, which developed at the conclusion of the last glacial era when the sea level rose and absorbed a river coming from the mainland.

Kenya’s coastal tourist capital is Mombasa. Although many people visit the Old Town and Fort Jesus, Mombasa Island is not a major tourist destination. The beaches of Nyali, Bamburi, and Shanzu are situated to the north of the city. South of Mombasa are the Shelly, Tiwi, and Dianibeaches. On these beaches, there are many luxury hotels, while the less costly ones are farther away.

The northern shoreline of Mombasa is known for its vibrant 24-hour entertainment offerings, which include both family entertainment (water parks, cinemas, bowling, etc. ), sports (watersports, mountain biking, and gokarting), culinary offerings (restaurants serving a wide range of specialties from Kenya, China, Japan, India, Italy, Germany, and other countries), and nightlife (bars, pubs, clubs, discothèques, and so on).

An oil refinery with a daily capacity of 80,000 barrels and a cement plant capable of generating over 1.1 million tons per year are among the other local enterprises. The main intercontinental underwater telecom cables reach the beach near Mombasa, linking the African Great Lakes to the rest of the globe and fueling a rapidly expanding contact center industry in the region.

All of Mombasa’s Internet cafés feature phone booths, although the rates for calling overseas are exorbitant. If you plan on remaining in Kenya for at least 15 days, you should consider purchasing a local SIM card, such as Safaricom’s M-Pesa. Use VoIP if you have a smartphone.

Wi-Fi is widely available in the city, and many hotels and restaurants provide it for free.

Mombasa is a vital transportation hub for all modes of travel. It is the terminus of both the Transafrican Route 8 from Lagos and the Uganda railway. It is served by an international airport, Moi Airport, and one of the most significant ports in Eastern Africa, Kilindini, which also...

In Mombasa, there are no traffic signals, and the traffic will look chaotic to a westerner. Even when police are present, traffic regulations are disobeyed.BY MINIBUSIn the city, there is no regular public transit. The aforementionedmatatus (minivans), of which there are around 3500 in the city (licensed ones with stickers...

Given Mombasa's turbulent past, it's surprising that there are just a few attractions. Nature and a variety of diverse activities are what attract people to Mombasa. Additionally, there are a few landmarks located between 20 and 30 kilometers north, west, and south of Mombasa.Fort JesusFort Jesus Rd, +254 720 650869. daily...