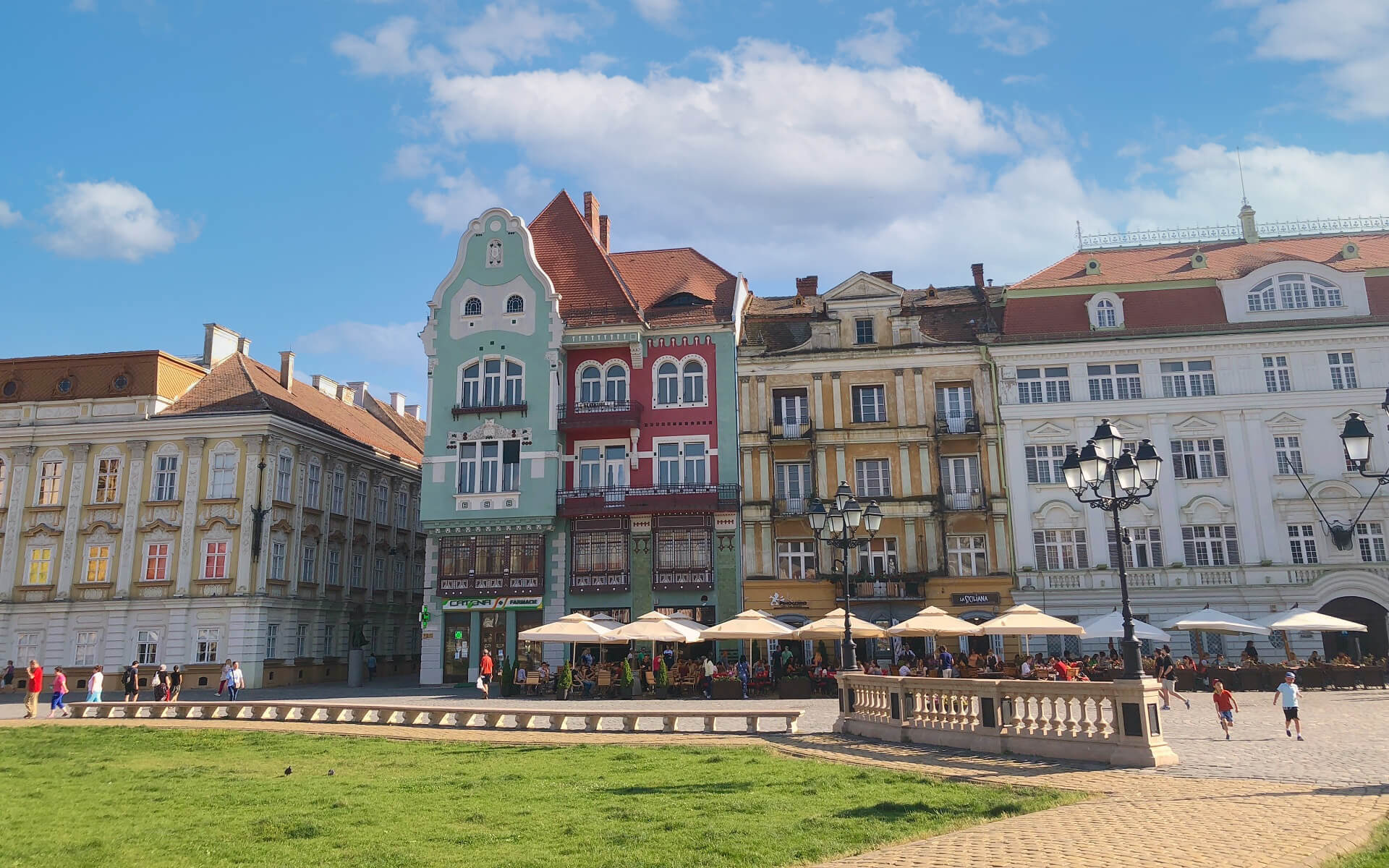 Timișoara is the county capital of Timiș and the primary social, economic, and cultural hub of western Romania.

Timișoara, one of the major Romanian cities (the third most populated city in the nation according to the 2011 census), is regarded the informal capital city of the historical area of Banat, with a population of 319,279 persons. The city is a contender for the title of European Capital of Culture in 2021.

Timişoara is a university town and an industrial hub in western Romania. It is often referred to be Romania’s most cosmopolitan city.

The city center is mostly made up of buildings from the Austrian Empire period. The ancient city is divided into various historic districts. Cetate (Belváros in Hungarian, Innere Stadt in German), Iosefin (Józsefváros, Josephstadt), Elisabetin (Erzsébetváros, Elisabethstadt), and Fabric (Gyárváros, Fabrikstadt) are among them. In the historic Baroque plaza, several pubs, clubs, and restaurants have arisen (Unirii Square).

Enjoy delicious coffee items at Piata Unirii or Piata Victoriei (Victory Square). Weekend nightlife may be experienced by dancing all night in Club The Note or D’Arc, or at its summer sites, River Deck or D’Arc terrace on the banks of Bega Channel. Enjoy a delicious pizza or pasta at Da Toni, a good beer at Bierhaus (which has over 50 different varieties of beer), excellent Romanian cuisine at Club XXI, and don’t miss the drinks at River Deck or Club The Note. Iulius Mall is the place to go if you like shopping. Take a stroll in the Botanical Park. Timisoara is a fairly cosmopolitan city where you may enjoy a wide range of activities if you inquire about.

The climate in this region features modest temperature fluctuations between highs and lows, and there is ample rainfall all year. This climate’s Köppen Climate Classification subtype is “Cfb” (Marine West Coast Climate/Oceanic Climate).

Timișoara’s climate is temperate-oceanic (Köppen: Cfb) and may be classified as humid continental (Dfb) when an isotherm of 0 °C (32 °F) is used. The city epitomizes the Pannonian Basin’s southern-eastern region.

Climatic general characteristics include a variety of and irregular weather conditions. During the spring and summer, the dominant temperate air masses are of oceanic origin and provide heavy precipitation. Even throughout the winter, the Atlantic wet air masses often bring rain and snow, but seldom frigid temperatures.

From September to February, the region is often invaded by continental polar air masses arriving from the east. Despite this, the Banat climate is also impacted by the presence of cyclones and warm air masses from the Adriatic and Mediterranean seas. Their distinguishing trait is total snow melting in the winter and suffocating heat in the summer.

Snowfalls have occurred as early as late October and as late as early April, although snow in those months is uncommon, and large falls do not normally occur until late November. The median date for the first frost is October 22, with the latest freeze being on April 15.

Timișoara is located at an elevation of 90 meters on the southeast margin of the Banat plain, which is part of the Pannonian Plain, at the confluence of the Timiş and Bega rivers. The two rivers’ waters combine to make a muddy and regularly flooded landscape. Timișoara grew up on one of the few points where the wetlands could be bridged. For a long time, they provided natural security surrounding the castle; nevertheless, they also favored a rainy and unsanitary environment, as well as the spread of plague and cholera, which kept the population at a low level and substantially hampered the city’s growth. However, throughout time, the area’s rivers were emptied, dammed, and rerouted. Because to these hydrographic operations completed in the 18th century, the city is now located on the Bega canal rather than the Timiș River. This land development was rendered permanent by the construction of the Bega canal (which began in 1728) and the total drainage of the adjacent wetlands. However, the terrain throughout the city is above a water table at a depth of just 0.5 to 5 metres (1.6–16.4 feet), making big structures impossible to erect. This is a productive agricultural area due to the rich black soil and relatively high water table.

This is a moderately active seismic region, with earthquakes measuring up to 6 on the Richter scale reported.

Since the establishment of the Habsburg rule in the 18th century, Timișoara has been an important commercial center. The economy started to flourish as a result of Austrian colonization, ethnic and religious variety, and inventive regulations. The technicians and artisans who arrived in the city formed guilds and contributed to the development of the city’s economy. Notably, Timișoara became the site of the first beer plant in what is now Romania in 1717.

Numerous contemporary advancements were developed during the Industrial Revolution. It was the first city in the monarchy to have street lighting, as well as the first city in continental Europe to have electric illumination. During this period, the Bega River was also channeled. It was the country’s first navigable canal. This allowed Timișoara to maintain touch with Europe, and possibly the rest of the globe, through the Black Sea, resulting in the local growth of commercialism. The Hungarian Kingdom’s railway system reached Timișoara in the nineteenth century.

Timișoara was the first city in the country to have international lines, and the city’s economy has grown as a result of increased foreign investment, particularly in high-tech areas. Timișoara is ranked fourth in the country in terms of living conditions. Timișoara was dubbed “Romania’s economic showpiece” by the French magazine L’Expansion in late 2005, and the growing number of international investments was described to as a “second revolution.”

Aside from internal local investment, substantial international investment has come from the European Union, mainly Germany and Italy. Continental AG has been manufacturing tires since building a facility in 2000. The Linde Group manufactures technical gases, while the Dräxlmaier Group manufactures wire molds for BMW and Audi automobiles. Kromberg & Schubert, a German firm, manufactures wiring for Volkswagen and other cars. Furthermore, Swiss company FM Logistic, already present in Timiș County for Nestlé, P&G, and in Bucharest for Cora, L’Oréal, Sanofi Aventis, and Yves Rocher, and for companies like PROFI Rom Foods, BIC, Kraft Foods, or SCA Packaging—offering domestic transport services and international transport services for Bricostore, Arctic, Danone,Unilever, or Contitech, the growth of FM Logistic in Romania Nestlé manufactures waffles on this location. McDonald’s, KFC, Pizza Hut, Subway, and Starbucks are among the chain eateries present.

Iulius Mall Timișoara and Retail City Timișoara are the city’s two shopping malls. Timișoara Centrum, the third, will be finished in 2017.

Flextronics, a firm based in the United States, has a factory in the city’s west for the manufacturing of mobile telephony and government inspection department gadgets. The firm lay off 640 employees in 2009. Procter & Gamble, an American corporation, produces washing and cleaning chemicals in Timișoara. Smithfield Foods, the world’s biggest hog and pig processor, has two businesses in Timișoara and Timiș County: Smithfield Ferme and Smithfield Prod.

Timișoara, like the rest of Romania, had an economic slowdown in 2009 as a result of the worldwide economic slump.

Tartu is Estonia’s second biggest city, behind Tallinn, the country’s political and financial capital. Tartu is often regarded as the country’s intellectual center, in...
Read more

Thailand, formally the Kingdom of Thailand and previously known as Siam, is a Southeast Asian nation located in the center of the Indochinese peninsula....
Read more

Baku is Azerbaijan’s capital and biggest city, as well as the largest city on the Caspian Sea and in the Caucasus area. Baku lies...
Read more