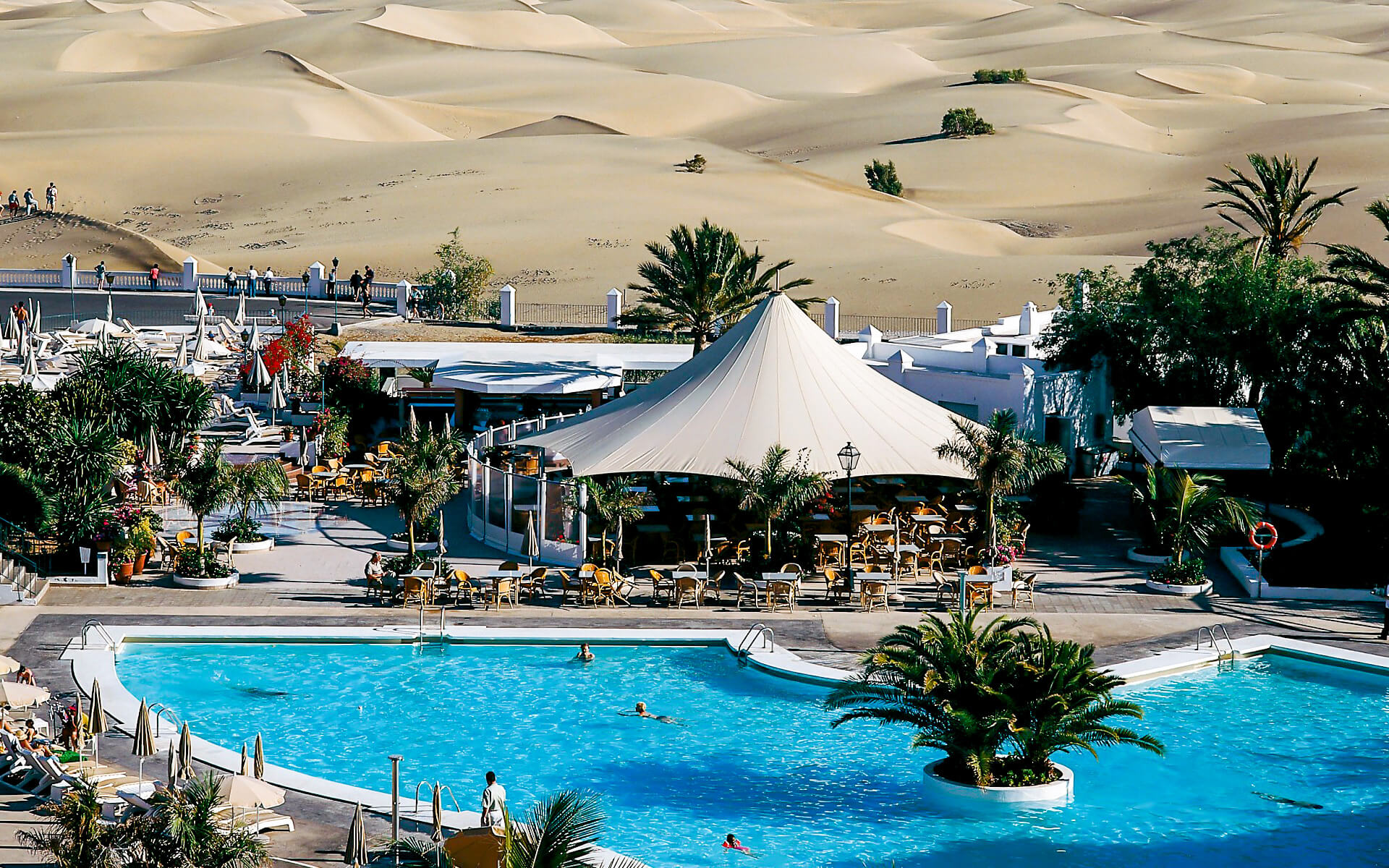 Gran Canaria is the second most populated island in the Canary Islands, an African archipelago that is part of Spain, with a population of 847,830 (in 2015), accounting for nearly 40% of the archipelago’s population. Located in the Atlantic Ocean around 150 kilometers (93 miles) off Africa’s northern coast and roughly 1,350 kilometers (840 miles) from Europe. Gran Canaria is the third biggest island in the archipelago in terms of size and height, with 1,560 km2 (602 sq. mi) and an altitude of 1,956 m (6,417 ft) at the Pico de las Nieves.

The Canarii, who may have come as early as 500 BC, settled in Gran Canaria. Tamarán, meaning Land of the Brave, was the name given to the island by the Canarii. After more than a century of European invasions and conquering attempts, the island was captured on April 29, 1483, by the Crown of Castile, with the help of Queen Isabella I, after a five-year struggle, a victory that proved to be a significant step towards the development of the united Spain.

Gran Canaria’s official language is Spanish. However, in tourist regions, one might hear many individuals speaking English and German.

Canario is a Spanish dialect with a somewhat more singing tone than the mainland, less clear pronunciation, and the insertion of multiple verb tenses. Even for those with a rudimentary understanding of Spanish, the dialects spoken on the islands may be difficult to adjust to. However, in Tenerife, the pronunciation seems to be more neutral, leaning toward standardized Spanish. It is comparable to Chilean Spanish in certain ways.

This island is known as a “Miniature Continent” because of the many climates and sceneries encountered, including extensive beaches and dunes of white sand that contrast with lush ravines and charming settlements. UNESCO has designated a part of the island as a Biosphere Reserve.

In 2014, there were 3.6 million yearly tourists (of which 450.000 Spaniards). The southern half of the island attracts the majority of visitors. The north is generally colder, whilst the south is warmer and sunnier. The island’s east coast is flat and littered with beaches, but the west side is rockier and rugged.

The island has 32 Natural Protected Areas, including the Nublo Rural Park, the Doramas Jungle, the Azuaje Ravine, Tamadaba, Pino Santo, and others.

Palmitos Park, a huge bird park, and various beach resort settlements may be found in the south. Resorts are centered in the Maspalomas region of the southern coast, which includes the towns of San Agustn, Playa del Inglés, and Meloneras. The Maspalomas Dunes are situated between Playa del Inglés (“The Englishman’s Beach”) and the characteristic Maspalomas lighthouse from the nineteenth century.

There is an Aeroclub at Tarajalillo from which tourists may fly across the island.

Further west along the southern coast, in the Municipality of Mogán, are the towns of Puerto Rico and Puerto de Mogán, a community known as “Little Venice” because to its many canals.

Other attractions include Cocodrilos Park, Roque Nublo (an 80-meter monolith), Cenobio de Valerón with over 350 storage cavities, the Painted Cave of Galdar, the Canary Islands’ most important archaeological park, and the botanical gardens Jardn Canario (in Tafira Alta) and Cactualdea (in La Aldea de San Nicolás).

El Dedo de Dios, or “God’s Finger,” was a rocky spire rising from the sea near Puerto de las Nieves that was originally the Canary Islands’ defining attraction until it was destroyed by tropical storm Delta, which passed across the archipelago in November 2005.

Las Palmas de Gran Canaria is the capital city. Las Canteras beach, a protected area and diving zone, is located near the city center. The yearly carnaval at Las Palmas de Gran Canaria is also well-known. It was the first stop of Christopher Columbus’ mission on his way back from the Americas, and the Hermitage of San Antonio Abad, where the navigator worshipped, and the Casa de Colón are memorials to him. Other attractions in the capital city include the Museo Canario (the archipelago’s most significant archeological museum), the church, and the Plaza del Espritu Santo. The shrine of the Virgen del Pino (“Virgin of the Pine”), Gran Canaria’s patron saint, can be located near Teror. Its feast is held on September 8th.

Agüimes, in the island’s east, has been meticulously restored, and its town center, based on a historic church and a tranquil plaza, now conjures the serene life of a typical Canarian village. In the protected region of the Guayadeque ravine, where even the church has been carved into the slope and tourists can discover a number of famous cave eateries, the neighborhood also boasts some of the finest preserved cave houses. The region also features the island’s most well-known scuba diving location, the marine reserve at Playa de El Cabrón, just outside the town of Arinaga.

Other notable settlements include Telde, which is widely known for its hot dog sales on the Salinetas shore, Vecindario (in the municipality of Santa Luca de Tirajana), and Gáldar, which is an important diving zone. Arucas is home to a Neogothic temple known as the “Arucas Cathedral,” as well as a huge fertile plain where bananas are produced. There is also a banana-growing plain in Gáldar and its surroundings, as well as some remarkable archaeological remains, such as the Painted Cave of Galdar or the cenobio de Valerón’s communal silos, ancient tombs (including the necropolis of Maipés), and the port of Sardina del Norte (one of the island’s ports where Christopher Columbus used to get supplies for his ships, as in Las Palmas).

The fishing town of Arguinegun in the Municipality of Mogán is located west along the southern coast.

The climate is subtropical semi-arid in most places, however it varies greatly depending on where you travel. The weather is typically pleasant in the major tourist destinations.

Arguinegun has the nicest climate, with the least wind, and is also among the driest in winter owing to its sheltered position.

Las Palmas has a somewhat varied climate, and it may be cloudy and rainy at times, even in May and June, although it is not particularly usual. If you are traveling in the winter, bring at least one heavy jacket. If you want to visit the mountains, carry or purchase a scarf and gloves. Pozo de Las Nieves may approach the freezing point.

During the summer, always have a bottle of water with you. If Sahara winds blow and temperatures reach beyond 40 degrees, try to remain in the shade, near to climatized air, and drink lots of water.

Gran Canaria is situated to the southeast of Tenerife and to the west of Fuerteventura. The island is volcanic in origin and is mostly made up of fissure vents. Gran Canaria has a land area of 1,560 km2 and a maximum height of 1,949 meters (Pico de Las Nieves). It is round in form, having a circumference of about 50 kilometers.

Approximately 80% of the island’s bulk was produced between 14 and 9 million years ago, during the Miocene epoch. This is known as the “Old Cycle,” and it is believed to have lasted 200,000 years and generated around 1000 km3 of fissural alkali basalt. The emission of trachytes, phonolites, and peralkaline rocks continued this cycle. This was followed by a phase of erosion that lasted around 4 million years.

Between 4.5 and 3.4 million years ago, a second cycle of volcanic eruptions known as the “Roque Nublo cycle” occurred. This shorter cycle produced around 100 km3. The majority of the inland peaks were produced as a result of erosion from these minerals. This epoch similarly began with fissural basalts but finished with severe pyroclastic flow eruptions. In its last phases, several phonolitic features, such as the Risco Blanco, were also produced.

Changes in volume and hence weight of the island have led it to rise above the previous sea level during erosive times and sink during eruptive eras. Some of these “fossil beaches” may be seen on the more eroded northern coast’s cliff sides.