Monasteries Meteors are Orthodox monasteries near the town of Kalambaka and most visited attractions of Greece. Meteors was founded by monks in the 11th century. There was 20 but is now public open six monasteries. In recent years, promoting not only their spiritual significance, but also the beautiful nature which the are surrounded. Now in Greece you can find tours that include hiking, visiting caves and similar places around Meteors.

A large network monopath (lane old monk) splits the region. The most accessible are those that lead to the beautiful monastery Agia Triada -osnovao by a monk Dometius Agiou Stefanou and -women monastery. If you are not afraid of heights, you can get to Agio Pnevma (Holy Spirit), the walls of one of the oldest and smallest monasteries  Meteors  which is not included in the usual tour. There are also Agiou Nikolaou Anapafsas monasteries built in the 15th century who was raised by Dionisius, Agias Varvaras Rousanoú built in 1545 on the ruins of the old church, which was founded by Varlaam brothers Theophanis and  Nektarios Apsaradas, Magalou meteorological – most known meteorites and it is located on the top wall. There you can hear the exciting history of these buildings, but also to enjoy the incredible view of the enviroment.

Meteors are real mecca for lovers of rock climbing. You can rent a bike for the tour, but if you want a more relaxed grilling, you can navigate Jonas river that does not have many rapids and see Meteors from an entirely different angle.

At about 46 kilometers from Kalambaka, a small town where usually start tours to Meteors, is the village of Pili and the entrance to the magnificent canyon and nearis the Church of Porta Panagia from 13 century. From Pili, a beautiful trail leads through Elati, mountain village, which will remind you of the Swiss Alps.

Kalambaka has recently received two new museums – the Museum of Hellenic culture in which you can see exhibits of ancient Greek writings, including Homer’s original text and the Museum of Natural History is full of stuffed animals from around the world. On the top floor of the same museum are replicas of Greek mushrooms. For something different types of experience, you can visit Teopetra cave that is about seven kilometers from Kalambaka and in which there are traces from the time of the Neanderthals. Also, researchers believe that the stone wall in front of the caves about 23,000 years ago, which means that is the oldest known structure built by human hands. 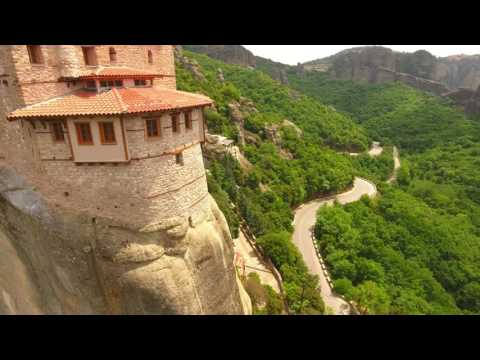