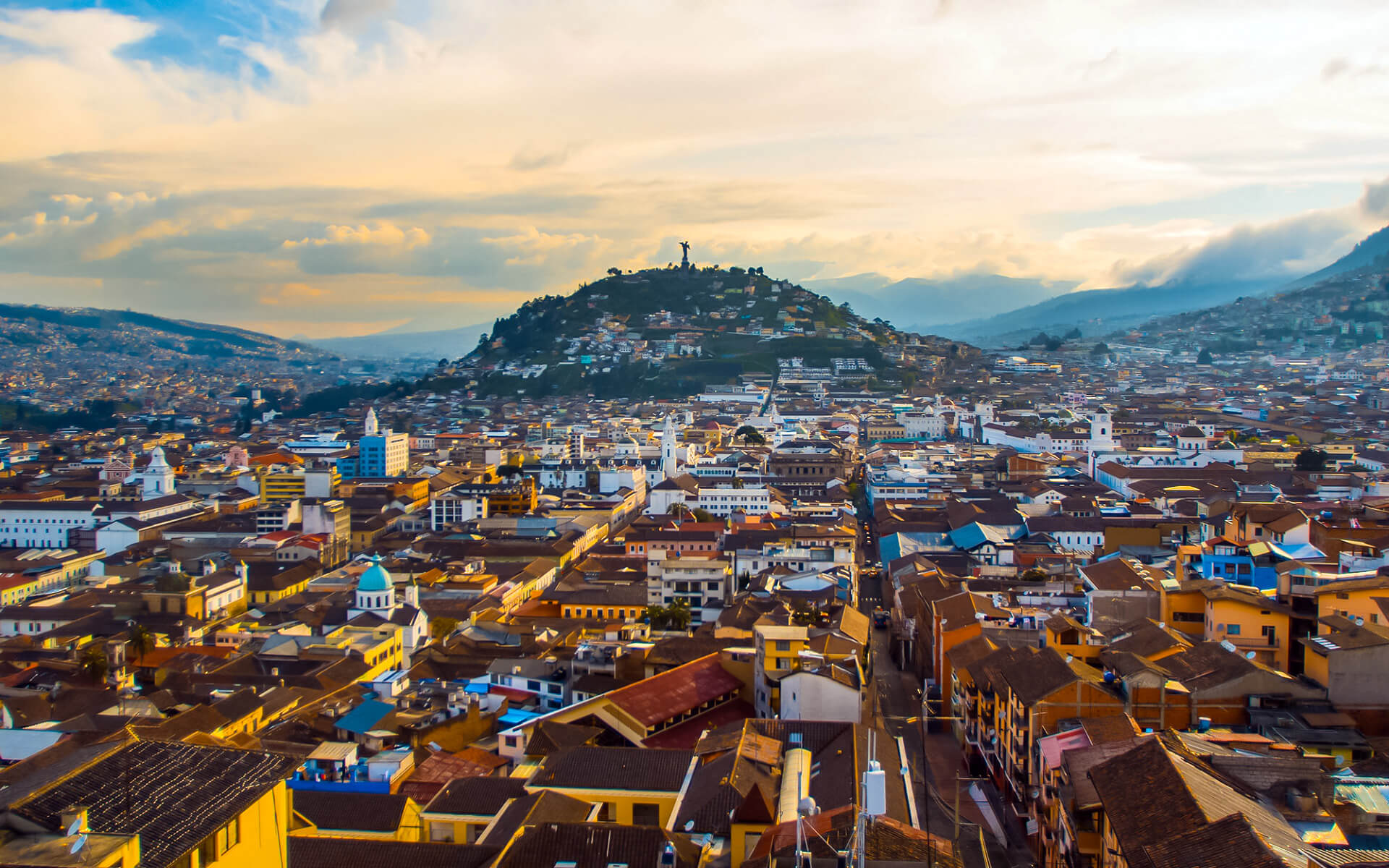 Quito, formerly San Francisco de Quito, is the capital city of Ecuador and the world’s highest official capital city, standing at 2,850 meters (9,350 feet) above sea level. It is situated on the eastern slopes of Pichincha, an active stratovolcano in the Andes highlands, in the Guayllabamba river basin. Quito is Ecuador’s second most populated city, behind Guayaquil, with a population of 2,671,191 according to the most recent census (2014). It is also the provincial capital of Pichincha and the headquarters of the Metropolitan District of Quito. In the 2010 national census, the canton had a population of 2,239,191 people. The city was named the headquarters of the Union of South American Nations in 2008.

Quito’s historic core is one of the biggest, least-altered, and best-preserved in the Americas. Quito and Kraków were the first UNESCO World Cultural Heritage Sites to be designated in 1978. Quito’s center plaza lies around 25 kilometers (16 miles) south of the equator, while the city itself stretches to within about 1 kilometer (0.62 mi) of zero latitude. To prevent misunderstanding, a monument and museum indicating the approximate position of the equator is known locally as la mitad del mundo (the middle of the globe), since the term ecuador is Spanish for equator.

Ecuador’s capital is Quito. It was built on the remnants of an old Inca city in 1534. Quito now has a population of two million people. In 1978, it was the first city to be designated as a UNESCO World Heritage Site (together with Kraków, Poland).

To get along, you should be prepared to speak some basic Spanish. Quito is a good location to study Spanish before traveling to other parts of South America. When compared to coastal locations, the Spanish spoken in Quito is fairly clear and spoken slowly. There are several good Spanish schools where you may take solo or group courses at a low cost. These schools will also arrange you homestay housing, which is simple, economical, and a fantastic opportunity to immerse oneself in the culture and sample the local cuisine.

Except in the touristic sections of North Quito, such as the “La Mariscal” sector, where the majority of tourist shops are situated, very few inhabitants know English. La Mariscal takes up many square blocks in North Quito and is the place to be if you’re carrying a backpack. There are several bars, restaurants, hostels, and internet cafés. Young people from many nations converge there.

Ecuador, particularly the Sierra area, which encompasses Quito, is a culturally conservative culture. This is mirrored in the way people dress. In Ecuador, people of all socioeconomic classes dress up. For males, this implies slacks and a button-down shirt. Women should wear slacks or dresses. Men and women seldom wear short pants in Quito, yet casual clothing has been increasingly popular in recent years, particularly among the young and on very hot days. Some well-known nightclubs and restaurants have a dress code. Finally, keep in mind that Quito is claimed to have “all four seasons in a day.” When the sun goes down, it may become rather chilly. Layering your clothing is a smart idea.

The Quito Visitors’ Bureau has a number of information centers across the city. These include the International Arrivals terminal at the airport; the small Parque Gabriela Mistral on Reina Victoria in the Mariscal District; the Banco Central Museum in the Mariscal District; and, finally, in the Old Town, on the ground floor of the Palacio Municipal on one side of Plaza Grande – their main hub. This offers friendly employees, luggage lockers, maps, brochures, and books for sale, and an Ecuadorian craft shop. This agency provides subsidized guided excursions on a variety of itineraries.

Quito has a subtropical highland climate, according to the Köppen climate classification (Cfb). Quito has a reasonably consistent cold temperature due to its height and proximity to the equator. The typical midday temperature is 18.7 °C (65.7 °F), with an usual nighttime low of 9.3 °C (48.7 °F). The yearly average temperature is 14 degrees Celsius (57 degrees Fahrenheit). There are only two seasons in the city: dry and rainy. Summer is defined as the period from June to September (4 months), whereas winter is defined as the period from October to May (8 months). The average annual precipitation is about 1,000 mm, depending on region (39 in).

Because of its height, Quito gets some of the most intense sun radiation in the world, with UV indexes exceeding 24 at times.

Because Quito is so close to the equator, high pressure systems are exceedingly unusual. Because pressure is steady, extremely low pressure systems are likewise uncommon. Between July 1, 2010 and June 30, 2011, the lowest recorded pressure was 998.2 hpa and the highest was 1015.2 hpa. Despite the lack of high pressure, Quito may still see peaceful weather. The peak pressure is usually around midnight, while the lowest is about mid-afternoon.

Quito is situated in Ecuador’s northern highlands, in the Guayllabamba river basin. The city is located on a large plateau on the Pichincha volcano’s east sides. The valley of the Guayllabamba River, in which Quito is located, is surrounded by volcanoes, some of which are snow-capped and visible from the city on a clear day. Quito is the capital city closest to the equator.

VOLCANOES IN THE AREA

Pichincha, the nearest volcano to Quito, towers above the city on the city’s western outskirts. Quito is also the world’s only capital that is directly threatened by an active volcano. Pichincha volcano has numerous peaks, including Ruku Pichincha at 4,700 meters and Wawa Pichincha at 4,794 meters. Wawa Pichincha is still active and is being watched by volcanologists at the national polytechnic university’s geophysical institute. The city was buried in more than 25 centimetres (10 in) of ash during the biggest eruption in 1660. In the nineteenth century, there were three small eruptions. The most recent eruption occurred on October 5, 1999, when a few puffs of smoke and a huge quantity of ash fell over the city.

Other neighboring volcanoes’ activity may potentially have an impact on the city. Following an eruption of the volcano Reventador in November 2002, the city was pelted with a covering of fine ash particles to a depth of several millimeters.

Quito is the greatest city in terms of GDP contribution to the country, and the second highest in terms of per capita income after Cuenca. Quito has the greatest amount of tax collection in Ecuador, above the national 57 percent each year in 2009, and is presently the country’s most significant economic zone, 63, according to the most recent “research” done by the Central Bank of Ecuador.

Quito is the headquarters of Petroecuador, the country’s biggest enterprise and one of the largest in Latin America.

Many national and international financial institutions, oil firms, and worldwide enterprises have their headquarters and regional offices in Quito, making it a world-class commercial metropolis.

Quito is classed as a Beta city in “The World according to GaWC global cities report, which analyzes a city’s integration into the world city network, as an important world class metropolis that is vital in integrating its area or state into the global economy.”

The Quito Visitors’ Bureau is an excellent location to start. It features a number of information centers located across the city. These include the International and Domestic Arrivals terminals at the airport; the Parque Gabriela Mistral in the Mariscal District (just north of Plaza Foch); the Banco Central Museum in the Masiscal District; and, finally, on the ground floor of the Palacio Municipal on one side of Plaza Grande – their main center – in the Old Town.

The main center has courteous English-speaking employees, luggage lockers, maps, flyers, and books for sale, and an Ecuadorian craft shop. This center also provides free guided tours of the Old Town, with guests only paying entry prices to attractions. The main office may be reached at (+593 2) 2570 – 786 / 2586 – 591, or by email at [email protected]

The main iTur (national tourist information offices) is situated in northern Quito, between La Carolina park and El Jardin malls, on the one side of Av. Eloy Alfaro y Carlos Tobar, to one side of the Ministry of Tourism.