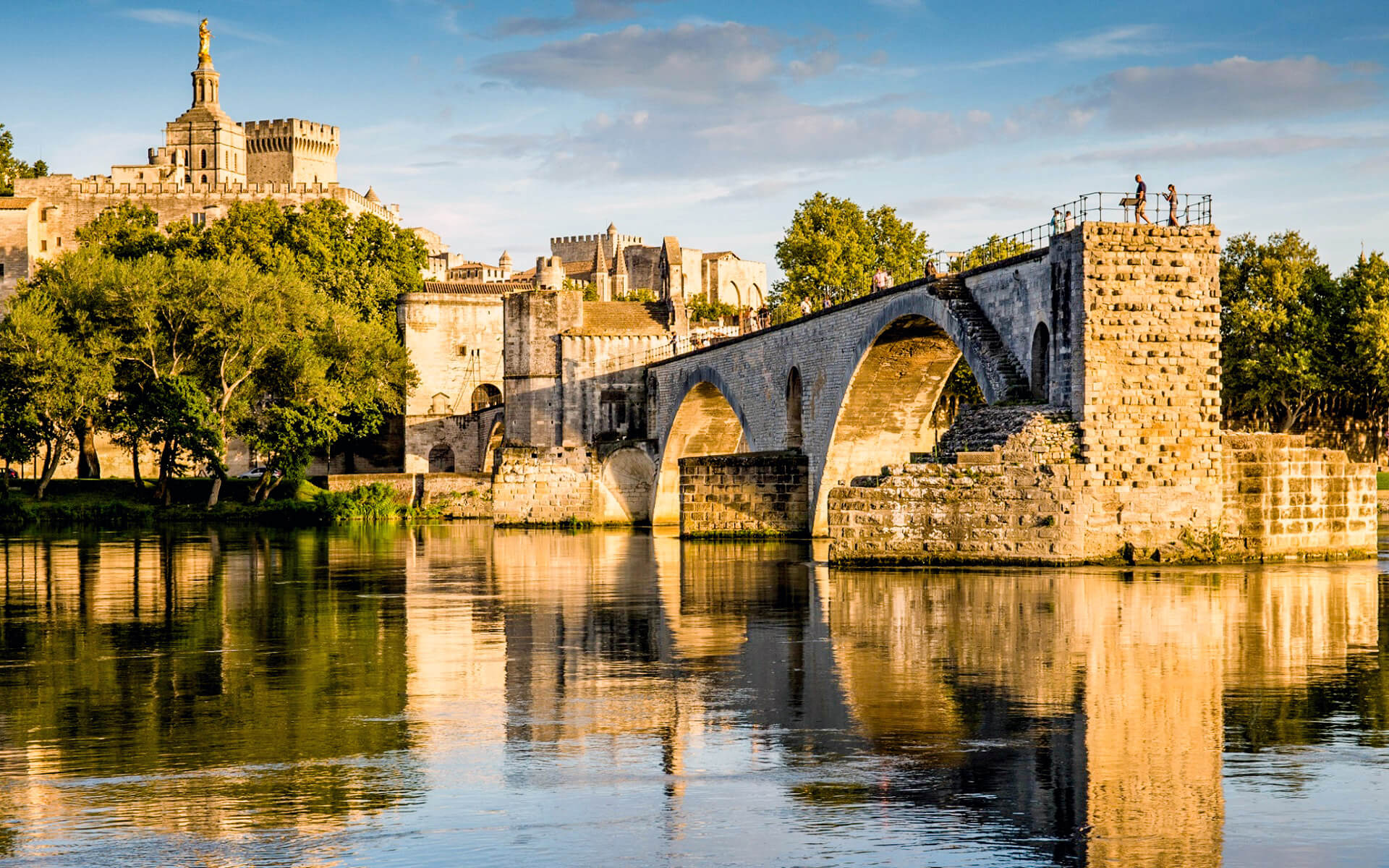 Avignon is a commune in the department of Vaucluse in south-eastern France, on the left bank of the Rhône River. Around 12,000 of the city’s 90,194 people (as of 2011) live in the historic town center, which is surrounded by medieval walls.

Seven consecutive popes stayed at Avignon from 1309 and 1377 under the Avignon Papacy, and in 1348 Pope Clement VI purchased the town from Joanna I of Naples. Papal rule lasted until 1791, when it was annexed by France during the French Revolution. The town is currently the Vaucluse department’s seat and one of the few French cities that have kept its walls.

In 1995, UNESCO designated the historic center, which includes the Palais des Papes, the church, and the Pont d’Avignon, as a World Heritage Site. The medieval monuments and the annual Festival d’Avignon have contributed to the town’s status as a significant tourist destination.

Four million visitors come to the city and region each year, as well as for the festival. The Palais des Papes was the most popular tourist attraction in 2011, with 572,972 paying visitors. The annual Festival d’Avignon is the city’s most major cultural event. In 2012, 135,800 individuals attended the official event.

River tourism started in 1994 with the establishment of three riverboat lodges. In 2011, there was a fleet of 21 river boat-hotels, including six sightseeing boats docked on the quay along the Oulle walkways. During the 2000s, attendance climbed to about 50,000 visitors, the majority of which came from Northern Europe and North America. A free shuttle boat links Avignon to the Île de la Barthelasse, and a port master has overseen all river traffic since 1987.

Avignon has a considerable number of historical structures and buildings (173) that are included on the UNESCO World Heritage List.

The buildings inside the city walls are ancient, although most have been renovated or rebuilt (for example, the post office and the Lycée Frédéric Mistral). The buildings on Rue de la République, the main street, originate from the Second Empire (1852–70), with Haussmann façades and facilities surrounding Place de l’Horloge (the center plaza), the neoclassical city hall, and the theater area.

Avignon has a humid subtropical climate with semi-warm winters and extremely warm summers with moderate rainfall all year. July and August are the warmest months, with average daily maximum temperatures about 28 degrees Celsius, while January and February are the coldest, with average daily maximum temperatures around 9 degrees Celsius. The driest month is July, with an average monthly rainfall of 35 millimetres, making the climate too moist to be categorized as Mediterranean (Köppen Csa). The city is often subjected to windy conditions; the strongest wind is the mistral. Avene ventosa, sine vento venenosa, cum vento fastidiosa is an overstated medieval Latin adage (Windy Avignon, pest-ridden when there is no wind, wind-pestered when there is).

Avignon is located on the left bank of the Rhône river, a few kilometers before its confluence with the Durance, about 580 kilometers (360 miles) south of Paris, 229 kilometers (142 miles) south of Lyon, and 85 kilometers (53 miles) north-northwest of Marseille. It borders the department of Gard and the communes of Villeneuve-lès-Avignon and Les Angles on the west, and the department of Bouches-du-Rhône and the communes of Barbentane, Rognonas, Châteaurenard, and Noves on the south.

The city is close to Orange (north), Nîmes, Montpellier (south-west), Arles (south), Salon-de-Provence, and Marseille (south-east). The communes of Caumont-sur-Durance, Morières-lès-Avignon, Le Pontet, and Sorgues are directly next to the east and north.

Avignon is the headquarters of the Vaucluse Chamber of Commerce and Industry, which oversees the Avignon-Caumont Airport and the Avignon-Le Pontet Docks.

There are 7,000 enterprises in Avignon, as well as 1,550 organizations, 1,764 stores, and 1,305 service providers. The metropolitan region has one of Europe’s greatest catchment areas, with over 300,000 square metres of retail space and 469 m2 per thousand inhabitants, compared to 270 in France on average. Avignon Nord’s business district is one of the biggest in Europe.

Because of the substantial production of early fruits and vegetables in Vaucluse, the tertiary sector is by far the most active in the department. The MIN (Market of National Importance) has become the central centre of commercial activity in the department, taking priority over smaller local markets (including that of Carpentras). The rise of commerce between the North and South of Europe in the 1980s and 1990s boosted Avignon’s position as a logistics center and encouraged the establishment of transport and storage firms for apparel and food.

A sensitive urban zone was established for enterprises looking to move and benefit from tax and social concessions. It is situated in the districts of Croix Rouge, Monclar, Saint-Chamand, and La Rocade, south of Avignon, between the city walls and the Durance.