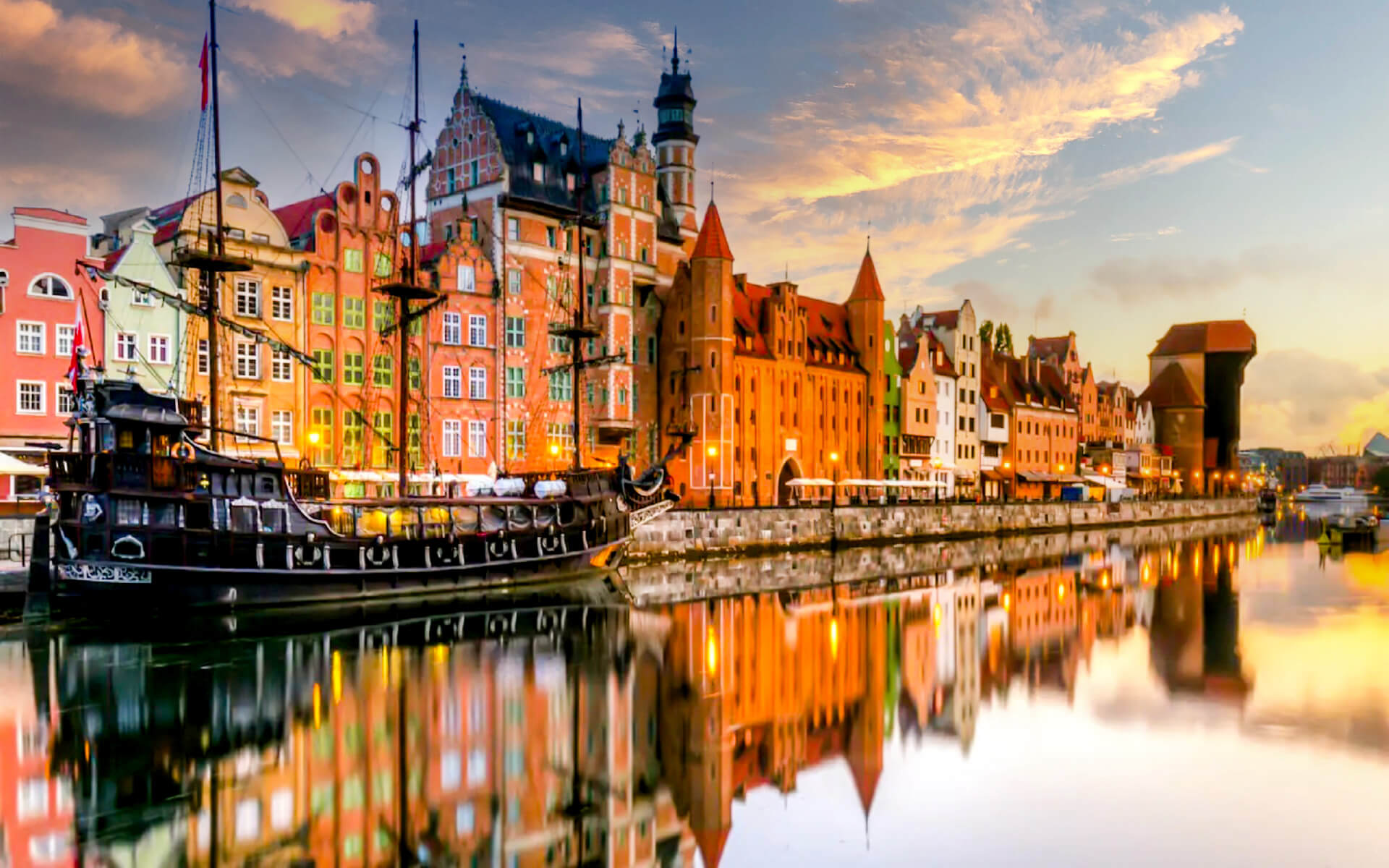 Gdansk is a Polish city on the Baltic coast that serves as the capital of the Pomeranian Voivodeship, Poland’s main seaport, and the focal point of the country’s fourth-largest metropolitan area.

The city is located on the southern side of Gdansk Bay (of the Baltic Sea), in a conurbation with the city of Gdynia, the spa town of Sopot, and suburban villages, which together create the Tricity (Trójmiasto), with a population of around 1.4 million people. Gdansk has a population of 460,427 people (as of December 2012), making it the biggest city in Northern Poland’s Pomerania region.

Gdansk is the capital of Gdansk Pomerania and Kashubia’s biggest city. The history of the city is complicated, with periods of Polish authority, Prusso-German domination, and periods of autonomy or self-government as a “free city.” The Free City of Danzig was in a customs union with Poland between the two wars and was positioned between German East Prussia and the so-called Polish Corridor.

Gdansk is located at the mouth of the Motawa River, which links to the Leniwka, a branch in the delta of the adjacent Vistula River, which drains 60% of Poland and connects Gdansk to Warsaw. Gdansk, together with the neighbouring port of Gdynia, is a major industrial hub. It was an important seaport and shipbuilding town in the late Middle Ages, and a member of the Hanseatic League in the 14th and 15th centuries.

Gdansk was the origin of the Solidarity movement, which helped put an end to Communist rule in Poland and helped cause the collapse of the Eastern Bloc, the fall of the Berlin Wall, and the disintegration of the Soviet Union five centuries later.

Gdansk (also known as Danzig in German) is a city in Poland on the Baltic Sea. It is Pomerania’s capital. Gdansk, together with adjacent Sopot and Gdynia, is known as the Tricity (pl: Trójmiasto). Gdansk boasts wonderful architecture and is regarded as one of the most attractive towns on the Baltic Sea.

The Tourist Card may be purchased at any Tourist Information Center.

Gdansk has a temperate climate, with chilly, gloomy winters and warm summers with frequent showers and thunderstorms. Average temperatures vary from 1.0 to 17.2 °C (30.2 to 63.0 °F), with monthly rainfall ranging from 17.9 mm to 66.7 mm. It has a marine climate, which means it is moist, changeable, and moderate.

The seasons are easily distinguished. Spring arrives in March, and it is first chilly and windy before turning pleasantly warm and often sunny. Summer, which starts in June, is primarily pleasant but hot at times (temperatures reaching 30-35 degrees Celsius at least once every year), with lots of sunlight mixed with heavy rain. Gdansk has an average of 1700 hours of sunlight each year. The warmest months are July and August. Autumn arrives in September and is pleasant and typically bright at first, before becoming chilly, rainy, and foggy in November. Winter lasts from December to March, and it includes snowfall. January and February are the coldest months, with temperatures as low as 15 °C (5 °F) at times.

Shipbuilding, petrochemical and chemical industries, and food processing dominate the city’s industrial areas. High-tech areas such as electronics, telecommunications, IT engineering, cosmetics, and medicines are growing in importance. Because the bulk of the world’s amber resources are located near the Baltic shore, amber processing is also a significant aspect of the local economy. The Pomeranian Voivodeship, which includes Gdask, is also a popular summer tourist destination, with millions of Poles and other Europeans flocking to the Baltic coast’s beaches.