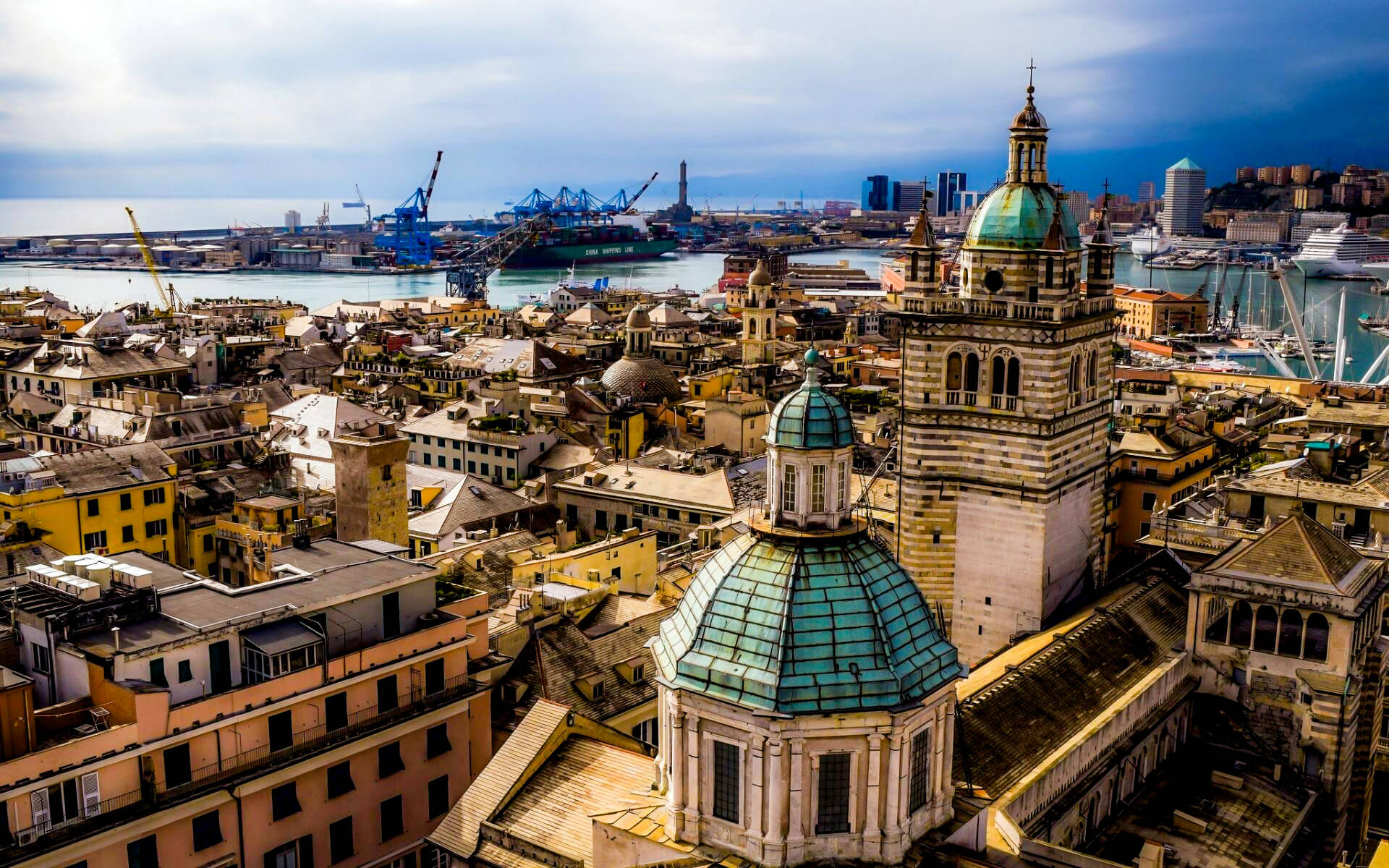 Genoa is the capital of Liguria and Italy’s sixth biggest city, with a population of 588,688 people living inside its administrative boundaries on a land area of 243.6 km2 (94 sq mi). The Genoa Metropolitan City urban area has an official population of 862,885. The Genoa Metropolitan Area is home to around 1.5 million people. Genoa is the biggest seaport in Italy and one of Europe’s major cities on the Mediterranean Sea.

Because of her magnificent history and spectacular monuments, Genoa has been dubbed la Superba (“the Proud One”). In 2006, UNESCO listed a portion of Genoa’s old town on the World Heritage List (see below). The city’s strong cultural past, particularly in art, music, and food, earned it the title of European Capital of Culture in 2004. It is where Christopher Columbus and Niccol Paganini were born.

Genoa is one of the country’s main economic centers, located at the southern end of the Milan-Turin-Genoa industrial triangle in northwestern Italy. Since the nineteenth century, the city has housed enormous shipyards and steelworks, and its strong banking sector extends back to the Middle Ages. The Bank of Saint George, established in 1407, is one of the world’s oldest and has played an essential part in the city’s economy from the mid-fifteenth century. Today, the city is home to a number of notable Italian corporations, including Selex ES, Ansaldo Energia, Ansaldo STS, Edoardo Raffinerie Garrone, Piaggio Aerospace, and Costa Cruises.

Genoa (Italian: Genova, Ligurian: Zena) is a historical port city in northern Italy that serves as the capital of the Ligurian Region. Even though Genoa has a long history as a wealthy and strong commercial center, it is sometimes eclipsed as a tourist destination by towns such as Rome or Venice. However, the birthplace of explorer Christopher Columbus has become an enticing place that is gradually becoming more included in the touristic market, thanks to its multitude of hidden gems behind cozy alleyways, excellent cuisine (particularly fish and seafood), renovated old port, beautiful sights (including one of Europe’s largest aquariums), and its position as the European Capital of Culture in 2004. Genoa is a must-see if you want to see “traditional” Italy, with its distinctive slate-roofed buildings, gorgeous cathedrals, lovely coastal mansions, and various upscale stores.

Of course, Venice, Rome, Milan, and Florence are the most well-known and renowned cities in Italy. When traveling to northern Italy (Milan, Turin), it is well worth stopping in Genoa for a few days or a weekend. The city is an excellent starting point for exploring the Italian Riviera and world-famous destinations such as Portofino and the Cinque Terre.

Paolo Coelho penned: “It will take some digging to locate the wonders of Genova among the wonders of Italy, but it is well worth a visit. I was going there with a buddy when she abruptly suggested, “Let’s stop for a minute.” “I can’t bear the color orange!” “.. The truth is that the longer you remain, the more you will appreciate and love the place. Even if you remain for years, you will find fresh surprises every day.

The city may be less well-known among big tour operators, but its magnificence is often buried behind the small lanes of the ancient center, known as “vicoli.”

Genoa is a type of ruined great port town, yet its degradation is what makes it so intriguing and beautiful. The facades of majestic palaces are buried in shabby, but tempting lanes, and there are really unusual surprises for everyone in almost every alley. The city is your “traditional” Italian one, with Mediterranean-looking villas topped by slate roofs, outdoor cafés and bars aplenty, and plenty of little and quirky alleways, fine designer stores, and restaurants. The ancient port has also been refurbished, and it now houses some quirky avant-garde contemporary buildings, a wonderful marina, and a number of coastal cafés and stores.

The climate in Genoa is Mediterranean (Csa in the Koeppen climate classification).

Genoa is also a windy city, particularly in the winter, when northern breezes often bring chilly air from the Po Valley (usually accompanied by lower temperatures, high pressure and clear skies). Another common wind comes from the southeast, primarily as a result of atlantic disturbances and storms, bringing humid and warmer air from the sea. Snowfall is infrequent but occurs virtually every year, however large quantities in the city center are uncommon.

The annual relative humidity average is 68 percent, ranging from 63 percent in February to 73 percent in May.

Sunshine hours exceed 2,200 every year, ranging from an average of 4 hours per day in winter to an average of 9 hours in summer. This figure is an average for the northern part of Europe and North Africa.

Genoa has a land area of 243 square kilometers (94 square miles) and is located between the Ligurian Sea and the Apennine Mountains. The city runs along the coast for roughly 30 kilometers (19 mi) from Voltri to Nervi, and 10 kilometers (6.2 mi) from the shore to the north via the valleys Polcevera and Bisagno. Genoa’s land is thus commonly split into five major zones: the center, the west, the east, the Polcevera, and the BisagnoValley.

Ligurian agriculture has strengthened its specialization pattern in high-quality goods (flowers, wine, olive oil), allowing it to keep the gross value-added per worker substantially higher than the national average (the difference was about 42 percent in 1999). Flower production accounts for more than 75% of agricultural sector revenue.

Steel, formerly a big sector in the 1950s and 1960s, was phased out following the late 1980s crisis, as Italy shifted away from heavy industry to embrace more technologically sophisticated and less polluting operations. As a result, the Ligurian sector has expanded into a broad variety of high-quality, high-tech goods (food, shipbuilding (in Sestri Ponente and in the metropolitan region – Sestri Levante), electrical engineering and electronics, petrochemicals, aircraft, and so on). Nonetheless, the area has a thriving shipbuilding industry (yacht construction and maintenance, cruise liner building, military shipyards). Liguria’s gross value-added per worker in the services sector is 4% higher than the national average. This is because contemporary technology are becoming more widely available, notably in business and tourism.

A decent highway network (376 km (234 mi) in 2000) makes it reasonably simple to communicate with border areas. The main highway runs along the coast, linking the major ports of Nice (France), Savona, Genoa, and La Spezia. The number of passenger automobiles per 1000 people (524 in 2001) is lower than the national average (584). On average, 17 million tonnes of cargo are transported from the area’s principal ports, while 57 million tonnes enter the region. With a trade volume of 58.6 million tonnes, the Port of Genoa ranks first in Italy, and second in terms of twenty-foot equivalent units behind the transshipment port of Gioia Tauro, which has a trade volume of over 2 million TEUs. The primary cargo-passenger destinations are Sicily, Sardinia, Corsica, Barcelona, and the Canary Islands.

Belgrade, which translates as “White City,” is the capital of the Republic of Serbia and the country’s biggest city, with a population of over...
Read more

Spain, officially the Kingdom of Spain (Spanish: Reino de Espaa), is a sovereign state primarily located on the Iberian Peninsula in southwestern Europe. It...
Read more

Verona is a city on the Adige river in Veneto, northern Italy, with a population of over 265,000 people and one of the region’s...
Read more

Majuro is the capital and biggest city of the Marshall Islands, as well as the largest coral atoll in the Pacific Ocean, with 64...
Read more

Hungary is a Central European unitary parliamentary republic. It has a land area of 93,030 square kilometers (35,920 square miles), is located in the...
Read more

Nadi is Fiji’s third-largest conurbation. It is situated on the western side of Viti Levu’s main island and had a population of 42,284 at...
Read more
Luxury travel

Dubai is building a rainforest in a new luxury hotel