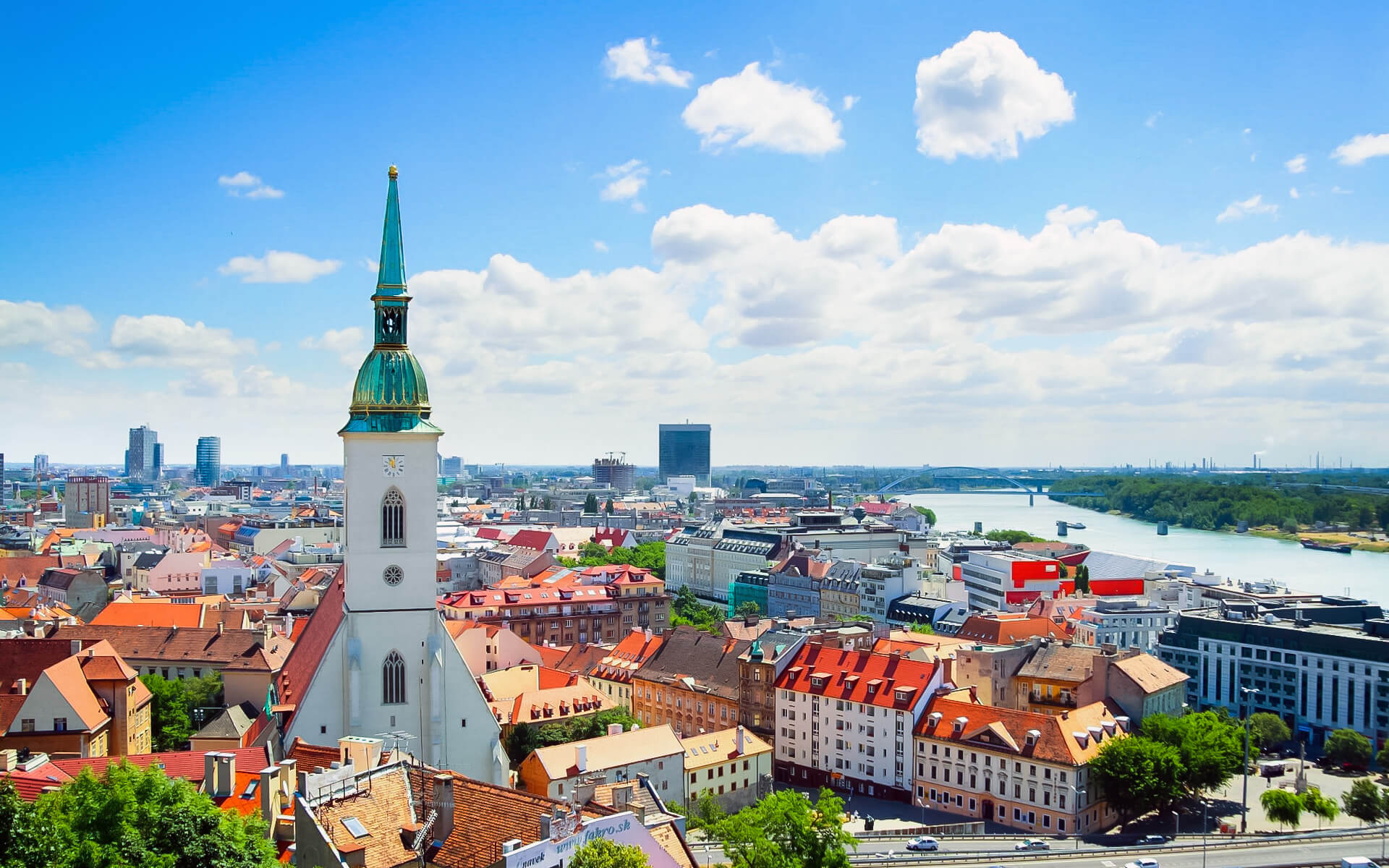 Bratislava is the capital of Slovakia and the country’s biggest city, with a population of over 500,000 people. More than 650,000 people live in the broader metropolitan region. Bratislava is located in southern Slovakia, on both sides of the Danube River and the left bank of the Morava River. It is the only national capital that borders two separate nations, Austria and Hungary.

Bratislava is Slovakia’s political, cultural, and economic center. It is the home of the President of Slovakia, the Parliament, and the Slovak Executive. It is home to a number of universities, museums, theaters, galleries, and other significant cultural and educational organizations. Many of Slovakia’s major corporations and financial organizations have their headquarters there as well.

The city’s history has been heavily affected by people of many ethnicities and faiths, namely Austrians, Croats, Czechs, Germans, Hungarians, Jews, Serbs, and Slovaks.

Some of the communist-era structures located in the city’s contemporary areas have a distinct architectural character; a prominent example is the Petrzalka housing estate, the largest Communist-era concrete block housing complex in Central Europe, which goes on indefinitely just over the river.

Moving east, there are lots of rural areas to discover. Farms, vineyards, agricultural terrain, and small towns can be found about 50 kilometers north and east of Bratislava.

Bratislava has 77 commercial lodging facilities (45 of which were hotels) with a total capacity of 9,940 beds in 2006. A total of 986,201 guests stayed overnight, with 754,870 of them being foreigners. In all, 1,338,497 tourists stayed overnight. Those who visit Bratislava for a single day, on the other hand, account for a significant proportion of visitors, while the precise number is unknown. The Czech Republic, Germany, the United Kingdom, Italy, Poland, and Austria have the highest number of international tourists.

Among other things, the rise of low-cost airline flights to Bratislava, driven by Ryanair, has resulted in a noticeable increase in stag parties, mainly from the United Kingdom. While they are beneficial to the city’s tourist sector, cultural differences and vandalism have caused local authorities to be concerned.

Bratislava has a fairly continental climate and is located in the north temperate zone.

The city is located in one of Slovakia’s hottest and driest regions.

Recent changes from winter to summer and summer to winter have been swift, with brief fall and spring seasons.

Bratislava is located in the Bratislava Region of Slovakia, in the south-western part of the country. It is the only national capital that borders two nations, due to its position on the borders of Austria and Hungary. It is just 62 kilometers (38.5 miles) from the Czech Republic’s border and 60 kilometers (37.3 miles) from Austria’s capital, Vienna.

Bratislava straddles the Danube River, which it grew up across and served as the main transit route to other parts of the country for centuries. The river flows through the city from west to east. The Middle Danube basin starts in western Bratislava near Devn Gate. Other rivers include the Morava, which forms the city’s northwestern boundary and joins the Danube near Devn, the Little Danube, and the Vydrica, which enters the Danube in the Karlova Ves borough.

Despite being the smallest by land and having the second lowest population among the eight Slovak regions, the Bratislava Region is the richest and most economically wealthy region in Slovakia. It accounts for around 26% of Slovak GDP.

In Bratislava, several governmental organisations and commercial firms have their headquarters. More than 75% of Bratislava’s workforce is employed in the service industry, which is mostly comprised of commerce, finance, information technology, telecommunications, and tourism.

When making an international call, dial 00 followed by the country code of the country you are phoning. Bratislava’s international code is +421 2, while its national code is 02. When making local calls, you do not need to utilize any of them. Cardphones are generally found in phone booths, but coin phones may be found, for example, in front of the telecommunications office (T-Centrum) on Namestie SNP (Dunaj department store) or on Kolarska ulica. Phone cards may be purchased at most newspaper kiosks and T-Centers.

Phone numbers starting with 090, 091, or 094 are almost always mobile phone numbers. Orange, T-Mobile, and O2 have 3G networks that cover the whole of Bratislava. Mobile phones in regions of Bratislava (mainly on the hills) may switch to Hungarian or Austrian carriers, so verify the network name before contacting.

There are various internet cafés in the city, the most of them are hidden. You may attempt to connect to one of the internet access points in the T-Centrum on Namestie SNP or the Aupark Shopping Center.

You may access various wifi hotspots across the city if you have a notebook computer. Some of them are paid, and in order to use them, you must first get a user name and password. Customers may get free Wi-Fi at several hotels, cafés, and restaurants. Aside from that, the core of the city center (Hlavné námestie, Frantikánske námestie, Primaciálne námestie) is covered by a free public wifi network supplied by the city council. There are also free Wi-Fi hotspots across the city.