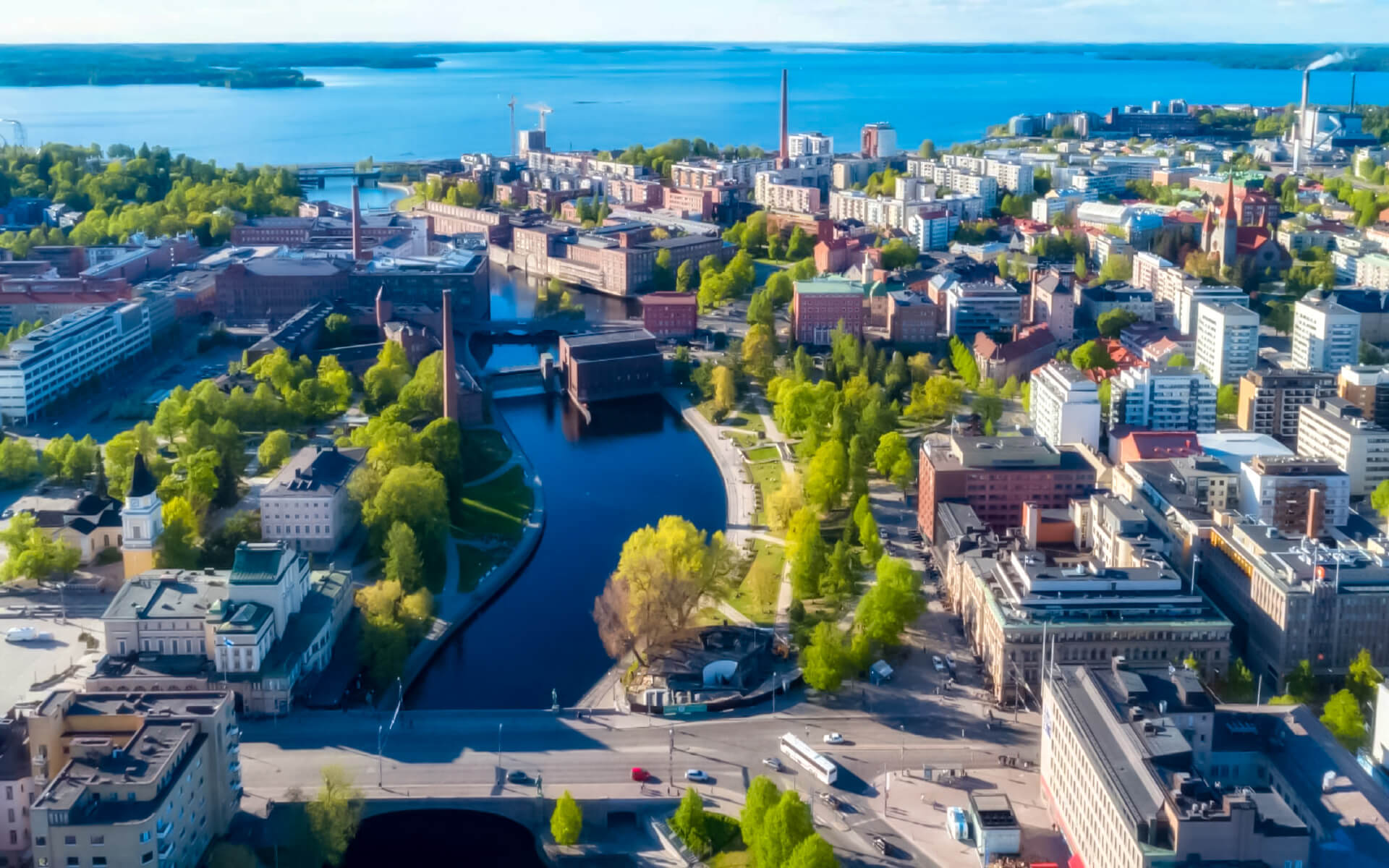 Tampere is a city in Pirkanmaa, Finland’s southernmost region. It has the highest population density of any inland city in the Nordic nations.

As of 2011, the city has a population of 223,292 inhabitants, rising to 313,058 in the urban area and 364,000 in the metropolitan area (Tampere sub-region) over an area of 4,977 km2. Tampere is the country’s second-largest metropolitan area and third-most populated individual municipality, behind Helsinki and Espoo (2014 data). It is also the most populated Finnish city outside of the Greater Helsinki region, as well as the primary urban, economic, and cultural core of central Finland.

Tampere is sandwiched between two lakes: Näsijärvi and Pyhäjärvi. Because the two lakes vary in elevation by 18 meters (59 feet), the Tammerkoski rapids, which connect them, have been a key power source throughout history, most recently for producing electricity. Tampere has been termed the “Manchester of Finland” due to its industrial heritage as the old capital of Finnish manufacturing, giving birth to its Finnish nickname “Manse” and expressions such as “Manserock.”

Helsinki is around 160 kilometers (99 miles) south of Tampere and can be reached by rail in 1.5 hours and by vehicle in 2 hours. The distance from Helsinki to Turku is nearly the same. Tampere–Pirkkala Airport, with over 400,000 passengers per year, is Finland’s third busiest airport.

Tampere (Swedish: Tammerfors) is Finland’s third biggest city, with a population of roughly 215,000 people (around 300,000 in the metropolitan area). It is the most populated inland town in the Nordic nations and is situated 170 kilometers north of Helsinki, Finland’s coastal capital. Geographically, the city is located on a small isthmus between Lake Näsijärvi in the north and Lake Pyhäjärvi in the south. Across addition, Tampere has 200 lakes and ponds, with a total of 450 in the area. Tampere, while being primarily a former heavy industrial center, is now a significant hub for information technology, research, education, culture, sports, and business. Tampere came in top place in an image study of Finland’s biggest cities in 2010. Leaving Helsinki behind, it was also shown to be the most appealing city among Finns planning to relocate.

The Särkänniemi amusement park, which contains a dolphinarium and the distinctive Näsinneula tower, which is topped by a rotating restaurant, is the primary tourist attraction. Tampere Cathedral, Tampere City Hall, Tampere City Library Metso (the “wood grouse”), Kaleva Church (both designed by Reima Pietilä), Tampere Hall for conferences and concerts, and Tampere Market Hall are all worth a visit.

Tampere also has one of the world’s last museums devoted to Vladimir Ilyich Lenin. The museum is situated in the Tampere workers’ hall, where Lenin met Joseph Stalin for the first time during a later Bolshevik congress in the city. Lenin went to Tampere in August 1905 but left (to Sweden) in November 1907 when the Russian Okhrana pursued him. Lenin would not return to any region of the Russian Empire until 10 years later, when he learned of the beginning of the 1917 Russian Revolution.

Tampere has a humid continental climate with subarctic overtones. Winters are chilly, with an average temperature of less than 0 °C (32 °F) from November to March. Summers are pleasant. The snow season lasts 4–5 months on average, from late November to early April. Winters are rather mild for the classification, given that it is near the subarctic boundary and inland, as is the yearly mean temperature.

Tampere is bordered by the municipalities of Kangasala, Lempäälä, Nokia, Orivesi, Pirkkala, Ruovesi, and Ylöjärvi, and is part of the Pirkanmaa area.

As of 2007, the Tampere area, or Pirkanmaa, which includes outlying municipalities, has around 0.47 million persons, 0.23 million employees, and a 25 billion euro turnover. According to the Tampere International Business Office, the region is strong in mechanical engineering and automation, information and communication technologies, health and biotechnology, and education in the pulp and paper sector. The unemployment rate is roughly 15%.

Internet cafés are few in Finland, and Tampere is no exception. If you bring your own laptop or smartphone, most cafés have free wireless internet access (or WLAN as it is mostly called in Finland). The Wireless Tampere network is available in the city center and a few additional spots around town. Free Internet connection is also available in the tourist office and the major library.