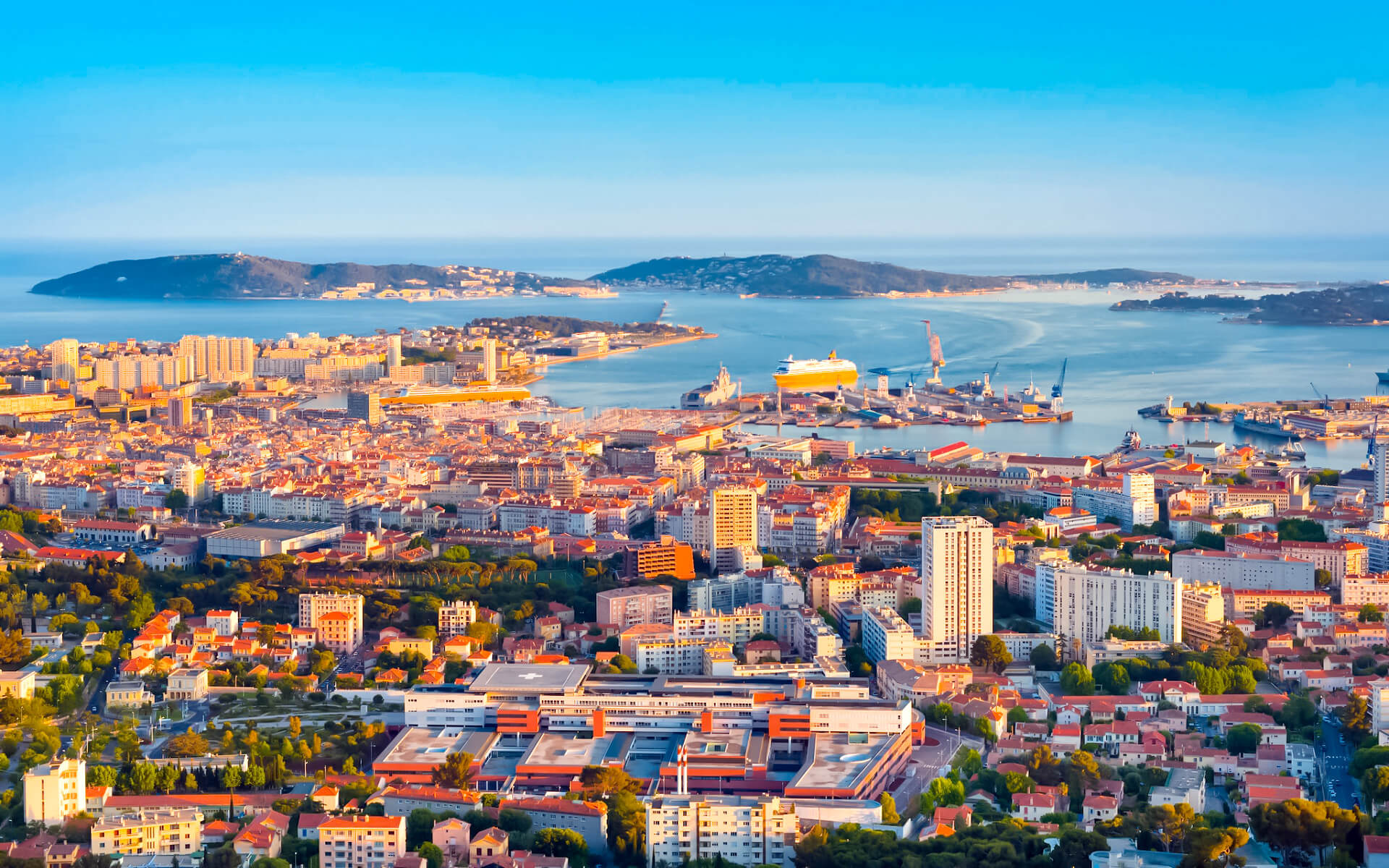 Toulon is a city in southern France and a significant military port on the Mediterranean coast, home to a major French naval station. Toulon is the capital of the Var department and is located in the Provence-Alpes-Côte-d’Azur region.

Toulon is the fifteenth-largest city in France, with a population of 165,514 inhabitants in 2009. It is the center of a 559,421-person urban area, the ninth-largest in France. After Marseille, Nice, and Montpellier, Toulon is the fourth-largest French city on the Mediterranean coast.

Toulon is a medium-sized city located between Marseille and Nice (15th town in France). It is located west of the French Riviera and southeast of Provence.

Toulon’s old town, situated between the harbour, the Boulevard de Strasbourg, and the Cours Lafayette, is a pedestrian district with narrow streets, tiny squares, and several fountains. The Cathedral of Toulon is situated here. The famed Provençal market, which takes place every morning on the Cours Lafayette and offers local items, is also located in the region. The old town had fallen into disrepair in the 1980s and 1990s, but many of the fountains and squares have lately been renovated, and many new stores have arisen.

Toulon’s Old Town is famous for its fountains, which can be seen in many of the little squares, each with its own personality. The original fountain system was established in the late 17th century; most of them were refurbished in the eighteenth or early nineteenth centuries and have lately been repaired.

THE UPPER TOWN OF BARON HAUSSMANN

The upper town, located between the Boulevard de Strasbourg and the railway station, was erected during the reign of Louis Napoleon in the mid-nineteenth century. Baron Haussmann, who was prefect of the Var in 1849, initiated the initiative. The Toulon Opera, the Place de la Liberté, the Grand Hôtel, the Gardens of Alexander I, the Chalucet Hospital, the Palais de Justice, the railway station, and the structure presently occupied by Galeries Lafayette were among the improvements to the neighborhood. Haussmann later used the same architecture on a far larger scale in the reconstruction of downtown Paris.

THE HARBOUR AND ARSENAL

Toulon harbor is one of the greatest natural anchorages in the Mediterranean and one of Europe’s biggest. In 1599, a naval arsenal and shipyard were erected, and in 1604–1610, a tiny protected port, the Veille Darse, was created to protect ships from the wind and sea. Cardinal Richelieu, who sought to turn France into a Mediterranean naval power, considerably expanded the shipyard. Jean-Baptiste Colbert and Vauban made more modifications.

Le Mourillon is a tiny beach neighborhood to the east of Toulon, close to the port entrance. It was formerly a fishing community, but it later became home to many of the French fleet’s commanders. Mourillon features a modest fishing harbor near to Fort Saint Louis, a 16th-century fort rebuilt by Vauban. Toulon created a series of protected sandy beaches near Mourillon in the 1970s, which are now highly popular with Toulonais and naval families. The Museum of Asian Art is housed in a riverside villa near Fort St. Louis.

Mount Faron (584 metres (1,916 feet)) towers above Toulon. The peak may be accessed by a cable car from Toulon, or through a tiny and dangerous route that ascends from the west and lowers to the east. The route is one of the most difficult stages of the yearly Paris–Nice and Tour de France cycling races.

A monument honoring the 1944 Allied landings in Provence (Operation Dragoon) and the liberation of Toulon may be seen at the summit of Mount Faron.

Vauban began building an intricate system of fortifications around Toulon in 1678. Some sections, such as the one that previously ran along the current Boulevard de Strasbourg, were destroyed in the mid-nineteenth century to allow the city to expand, while others remain. The Porte d’Italie, one of the historic city gates, is one area that may be visited. In 1796, Napoleon Bonaparte embarked on his famous Italian campaign via this gate.

The weather is typical for the south of France. Summers are quite hot, with temperatures often exceeding 30 °C. June is a scorching month, yet an unexpected storm may strike every now and again. July is known for its scorching temperatures and clear skies. August might be much hotter, although storms are possible, particularly after the 15th of the month. Autumns are wet. Storms are unavoidable. Winters are quite dry. Temperatures do not normally drop drastically below 0 °C, but the wind factor produces a loss in Celsius degrees equivalent to one less degree each 10 km wind speed, thus O°C will feel like minus 5°C with a wind blowing at 50 km/h.

Unlike many other towns in France, this one does not have a large river that runs through it. In reality, there are no major rivers in the whole department of Var. Rivière neuve, Le Las, L’Égoutyer, also known as Rivière des amoureux (lover’s river for no apparent reason) are a few lesser ones in the city. All of the other rivers are hidden under the city in tunnels.

The existence of a large French naval installation, which provides thousands of direct and indirect employment, is critical to the economy. Tourism is also significant. Every year, up to 167,400 visitors visit the town.