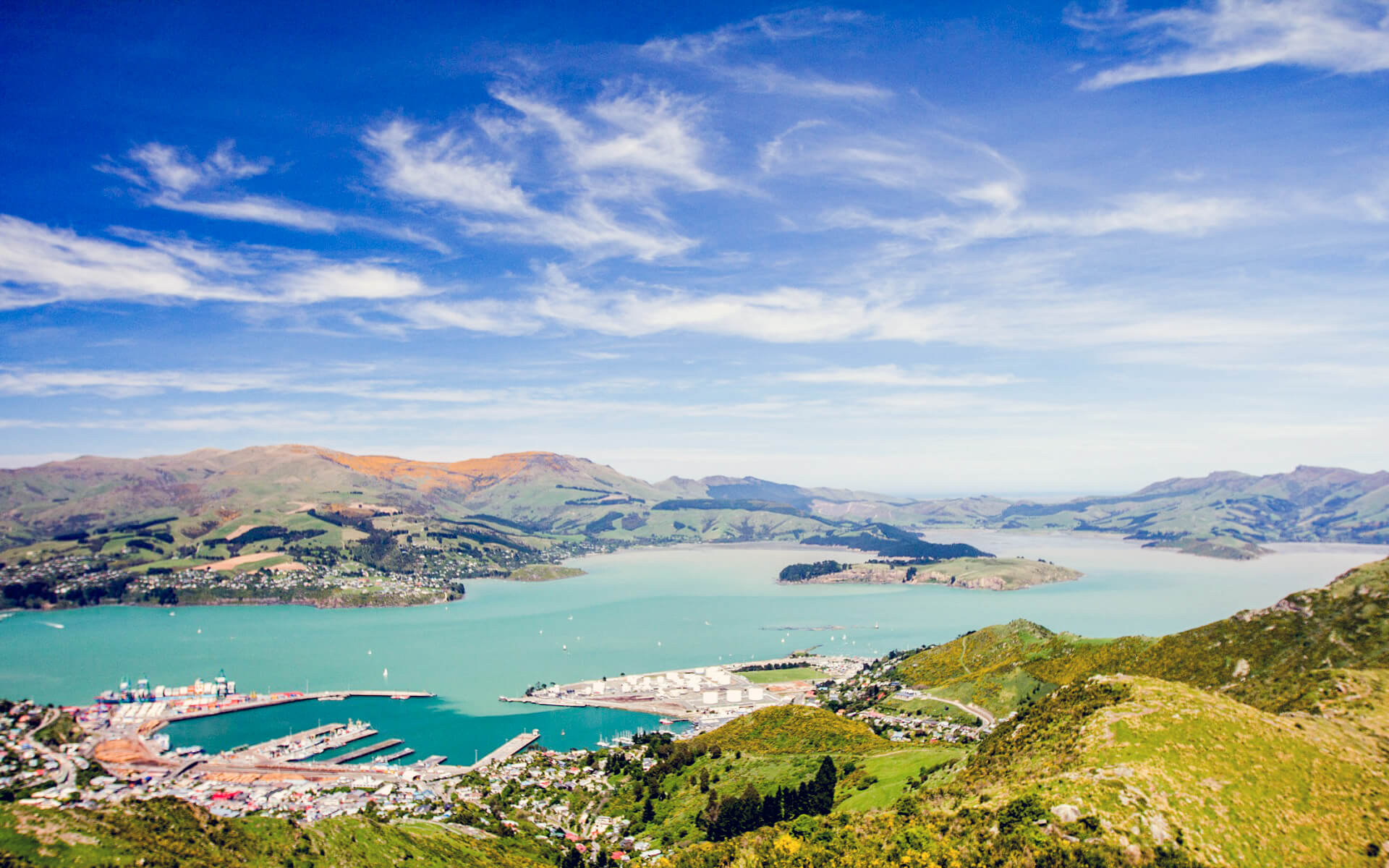 Christchurch is the biggest city on New Zealand’s South Island and the administrative center of the Canterbury Region. The Christchurch metropolitan area is located on the east coast of the South Island, just north of Banks Peninsula. It has a population of 381,800 people, making it New Zealand’s third most populated metropolitan region after Auckland and Wellington.

The Canterbury Association, which colonized the neighboring province of Canterbury, named the city. On March 27, 1848, the inaugural meeting of the organization decided on the name Christchurch. It was proposed by John Robert Godley, a Christ Church, Oxford graduate. Although some early authors referred to the town as Christ Church, it was recorded as Christchurch in the minutes of the association’s management committee. Christchurch was formed as a city by Royal Charter on July 31, 1856, making it the oldest city in New Zealand.

The river that runs through the heart of the city was called Avon at the request of the pioneering Deans brothers after the Scottish River Avon, which springs in the Ayrshire highlands near their grandfather’s farm and drains into the Clyde.

Tautahi is the traditional Mori name for Christchurch (“the place of Tautahi”). This was the name of a particular location along the Avon River, near Kilmore Street and the Christchurch Central Fire Station. The location was a summer residence of Ngi Tahu chief Te Potiki Tautahi, whose primary residence was Port Levy on Banks Peninsula. The term tautahi was given in the 1930s. Previously, the Ngi Tahu called the Christchurch region Karaitiana, a transcription of the English word Christian.

Christchurch is the biggest city on New Zealand’s South Island and the country’s third most populated metropolitan agglomeration. It not only has the most attractions of any location in the South Island, but it is also the main international entrance point for visitors to the rest of the island. It is located on the east coast of the South Island and serves as the administrative center for the Canterbury district.

Christchurch is recuperating and rebuilding after the February 2011 earthquake that badly devastated the city, killed 185 people, and displaced many more. While certain areas of the city are closed due to renovation, the majority of the city and region are available for commerce, and the city remains the primary entrance to the South Island.

Christchurch is a characteristically English city, yet it has a number of European influences, including Gothic Revival architecture. Mori culture, like early residents of New Zealand, is also strong in the city. It has several public open spaces and parks, river beds, cafés and restaurants in the city center and adjacent suburbs.

Christchurch has a temperate climate with moderate rainfall. It has mean daily maximum air temperatures of 22.5 °C (73 °F) in January and 11.3 °C (52 °F) in July. Under the Köppen climate classification, Christchurch has an oceanic climate (Cfb). Summer in the city is mostly warm but is often moderated by a sea breeze from the Northeast. A record temperature of 41.6 °C (107 °F) was reached in February 1973. A notable feature of the weather is the nor’wester, a hot föhn wind that occasionally reaches storm force, causing widespread minor damage to property.  Christchurch experiences the urban heat island phenomenon, similar to cities such as Tokyo, London and New York City, making temperatures feel warmer than they actually are within the inner city regions.

In winter it is common for the temperature to fall below 0 °C (32 °F) at night. There are on average 80 days of ground frost per year. Snowfalls occur on average three times per year, although in some years no snowfall is recorded.  The coldest temperature recorded was −7.1 °C (19 °F) on 18 July 1945, the third lowest recorded temperature of New Zealand’s major cities.

On cold winter nights, the surrounding hills, clear skies, and frosty calm conditions often combine to form a stable inversion layer above the city that traps vehicle exhausts and smoke from domestic fires to cause smog. While not as bad as smog in Los Angeles or Mexico City, Christchurch smog has often exceeded World Health Organisation recommendations for air pollution.  To limit air pollution, the regional council banned the use of open fires in the city in 2006.  In 2008 council prohibited the use of woodburners more than 15 years old, while making funding available to upgrade domestic home heating systems.

Christchurch is located in Canterbury, at the center of the South Island’s east coast, east of the Canterbury Plains. It lies on the southern end of Pegasus Bay and is surrounded to the east by the Pacific Ocean and the estuaries of the Avon and Heathcote Rivers. The volcanic slopes of the Port Hills, which separate the city from Banks Peninsula, confine the city’s urban component to the south and south-east. Banks Peninsula was included into the city in 2006, thus doubling its geographical size while adding just roughly 8,000 people to its population. The city is surrounded to the north by the braided Waimakariri River.

Christchurch is one of just eight cities in the world with almost identical antipodal cities. Half of these antipodal pairings are in New Zealand and Spain/Morocco, with Christchurch’s antipode being A Corua, Spain.

Christchurch is one of only four cities in the world with the similar pattern of a central city square, four complimenting city squares around it, and a parklands area that embraces the city center. Philadelphia was the first city to be created in this manner. Savannah and Adelaide followed, followed by Christchurch. As a result, Christchurch has a significant heritage and a solid foundation for future growth.

Christchurch boasts one of the world’s best water sources, with water that is considered among the purest and cleanest in the world. Untreated, naturally filtered water is pumped into the city from aquifers in the foothills of the Southern Alps through more than 50 pumping stations.

Christchurch’s economic heart has traditionally been the agriculture sector. The city has long had an economy centered on the surrounding agricultural region – it was part of the original “package” that New Zealand was pitched to immigrants as. The headquarters of PGG Wrightson, New Zealand’s major agribusiness, are in Christchurch. Its origins may be traced back to Pyne Gould Guinness, a historic stock and station firm that served the South Island. This company aided in the exportation of deer farming practices. Dairy production in Uruguay is part of PGG Wrightson’s international expansion. Other agribusinesses in Christchurch have included malting, seed research and dressing, wool and meat processing, and tiny biotechnology enterprises based on meat works byproducts. With high global pricing for milk products and the use of irrigation to boost grass growth on dry ground, dairying has risen rapidly in the surrounding regions. With its increased labor utilization, it has aided in halting rural population decreases. Many agricultural and livestock farms have been turned to dairy farms. Conversions have been made by both agribusiness corporations and farmers, many of whom have relocated south from North Island dairying strongholds like Taranaki and the Waikato.

Cropping has traditionally played a significant role in the surrounding area. The major crops have been wheat and barley, as well as numerous strains of clover and other grasses for seed exportation. All of these have resulted in the establishment of processing enterprises in Christchurch. Regional agriculture has expanded in recent years, with a booming wine industry sprouting up at Waipara and the beginnings of new horticultural businesses such as olive cultivation and processing. Deer ranching has resulted in innovative methods of manufacturing antlers for Asian medicine and aphrodisiacs. The excellent quality local wine, in particular, has improved Canterbury and Christchurch’s attractiveness to visitors.

Christchurch is New Zealand’s second biggest manufacturing center, after Auckland, and the industry is the second greatest contributor to the local economy, with enterprises like Anderson’s creating steel work for bridges, tunnels, and hydro-electric dams in the early days of infrastructural building. Now, manufacturing is mostly of light goods, and Australia is the primary market, with enterprises such as those pioneered by the Stewart family among the major employment. Prior to the shift of manufacturing to Asia, Christchurch was the epicenter of New Zealand’s apparel industry, with enterprises such as LWR Industries. The companies that remain mostly design, sell, and produce in Asia. There were also five footwear factories in the city, but they have been supplanted by imports.

Technology-based enterprises have sprung up in Christchurch during the previous several decades. Angus Tait created Tait Electronics, a mobile-radio producer, from which numerous companies sprung, including Dennis Chapman’s Swichtec. Gil Simpson built a software business that created the LINC and Jade programming languages, and a management buyout resulted in the formation of the local firm Wynyard Group.

There have also been spin-offs from the University of Canterbury engineering school’s electrical department. Pulse Data, which later became Human Ware (producing reading devices and computers for the blind and others with low vision), and CES Communications were among them (encryption). When the Pulse Data founders established Pulse Data via a management buyout of their division, they had migrated from Canterbury University’s engineering school to work for Wormald Inc.

In recent years, the engineering school and computer science department at the University of Canterbury have played an important role in supplying staff and research for the technology industries, while the Christchurch Polytechnic Institute of Technology has provided a steady flow of trained technicians and engineers. Locally and nationally, the IT industry is recognized not for its size (it is New Zealand’s third biggest), but for its creative and entrepreneurial ideas, products, and concepts.

Lincoln University, which is nearby, has played a key part in Christchurch agriculture.

Tourism is also an important part of the local economy. The closeness of the ski fields and other Southern Alps attractions, as well as hotels, a casino, and an airport that exceed international standards, make Christchurch a popular stopping location for many travellers. The city is popular with Japanese visitors, as seen by Japanese signs surrounding Cathedral Square.