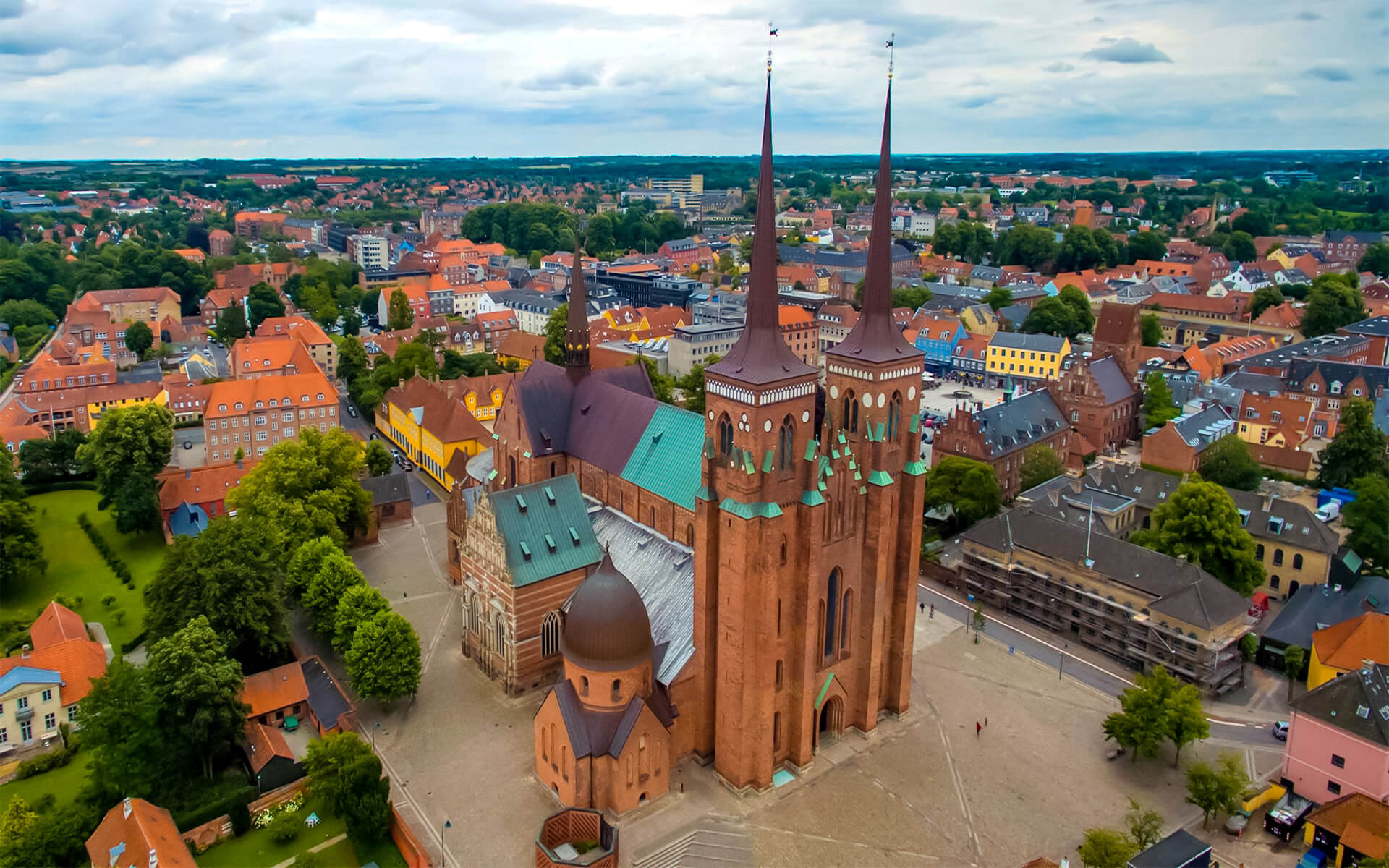 Roskilde is the principal city of Roskilde Municipality, which is situated 30 kilometers (19 miles) west of Copenhagen on the Danish island of Zealand. With a population of 50,046 (as of 1 January 2016), the city is a regional economic and educational hub, as well as Denmark’s tenth biggest city. Roskilde is managed by the Roskilde Municipality’s administrative council.

Roskilde has a significant history that dates back to the Viking Age before Christianity. Its UNESCO-listed Gothic cathedral, which today houses 39 Danish kings’ tombs, was finished in 1275 and served as a center of ecclesiastical influence until the Reformation. Roskilde became a significant center for commerce with Copenhagen with the expansion of the rail network in the nineteenth century, and by the end of the century, there were tobacco manufacturers, iron foundries, and machine shops. Among the major private sector employment today are the IT business BEC (Bankernes EDB Central) and the plastics firm GPI (Glim Plastic Industri). The Ris research center is also becoming a significant employment, expanding interest in renewable energy into the realm of clean technology. Educational institutions of interest include the local university, which was formed in 1972, the medieval Cathedral School, and the Danish Meat Trade College, which was founded in 1964. Roskilde features a big community hospital that has been extended and updated since its inception in 1855. It is currently becoming more involved in research. The Sankt Hans mental institutions provide forensic psychiatry services to the Capital Region.

More than 100,000 people visit the cathedral and the Viking Ship Museum each year, which houses the well-preserved remnants of five 11th-century ships. Roskilde is popular with shopping due to its two centrally placed pedestrian streets, which are filled with restaurants, cafés, and a variety of stores, in addition to its globally famous tourist attractions and its annual rock festival. The city is home to the FC Roskilde football team, which competes in Denmark’s first division, the Roskilde Vikings RK rugby club, and the Roskilde Roklub rowing club. The city profited from the inauguration of the university and the building of the Holbk Motorway, which connected it to Copenhagen, in the 1970s. Roskilde contains Denmark’s oldest running railway station, with links across Zealand as well as Falster, Lolland, and Jutland. The local airport first opened its doors in 1973, primarily servicing small aircraft for business and flying education.

Absalon, the bishop who founded Copenhagen in the 12th century, L. A. Ring, the symbolist painter who rose to prominence in the 1880s, writer Lise Nrgaard, who created the popular Danish TV series Matador in 1978, and rower Thomas Ebert, who won an Olympic gold medal in 2004 are among the city’s notable citizens.

Tourism is a significant part of the city’s economy, accounting for DKK 1.2 billion (US$200 million) every year. According to preliminary data, overnight stays increased by 16.6 percent in 2014. The cathedral and the Viking Ship Museum get over 100,000 visitors per year, despite the fact that the church received 200,000 visitors 20 years ago.

The city is particularly well-liked by consumers, having won Denmark’s Best Shopping City Award in 2012. Roskilde’s shopping center RO’s Torv on Kbenhavnsvej to the east of the city includes 70 businesses under one roof, in addition to a large range of shops and restaurants along its two main pedestrian lanes, Algade and Skomagergade.

The Raadhusklderen, housed in a 1430 structure, is one of Roskilde’s oldest restaurants, known for its salmon steak with tartar sauce and grilled chicken with cream sauce dishes. Also worth a visit are La Brasserie on Algade, the Gimle Musikcafe on Ringstedgade, which is an English-style pub-restaurant with live music, and Restaurant Toppen, which is located at the top of an 84-metre (276-foot) water tower erected in 1961 and offers stunning views of the city. The foundations of the 76-room Hotel Prindsen date back to 1695. It has been a hotel for almost a century and is furnished in a Nordic style with hardwood flooring, as well as housing the enormous luxury Hans Christian Andersen suite. Scandic Hotel Roskilde is a 98-room chain hotel that opened in 1989 and has a restaurant that serves Danish and foreign cuisine. The thatched-roof Svogerslev Kro is an 18-room inn built in 1727 in the Svogerslev neighborhood of Roskilde, approximately 2.5 miles west of the city center.

Roskilde is situated in north-central Zealand, near the southern end of Roskilde Fjord, which is the south branch of the Isefjord. It is located 35.6 kilometers (22.1 miles) west of central Copenhagen, 25.8 kilometers (16.0 miles) northwest of Kge, and 39.8 kilometers (24.7 miles) northeast of Ringsted. The city center, located 1,300 m (4,300 ft) south of the fjord, is about 40 m (130 ft) above sea level. There are many springs on the hill down to the harbour, the most strong of which is Maglekilde. The town’s historic center encompasses the area around the major streets Skomagergade and Algade, as well as the squares of Stndertorvet and Hestetorvet. Immediately north of the old town are two parks, Byparken and Folkeparken, which go down to the fjord.

Himmelev, Hyrdehj, Musicon, Sankt Jrgensbjerg, and Trekroner are nearby neighborhoods. Boserup Skov, a wood near Roskidle Fjord 3 kilometers (2 miles) northwest of the city center, is mostly made up of beech trees. Its rugged slopes are carpeted with wild flowers in the spring, including white, blue, and yellow anemones. In the early summer, you may hear chaffinches, nightingales, and other songbirds. The freshly planted forested area of Hyrdehj Skov, to the south of the stadium and immediately north of Route 23, on the southern suburbs of Roskilde, is also worth mentioning.