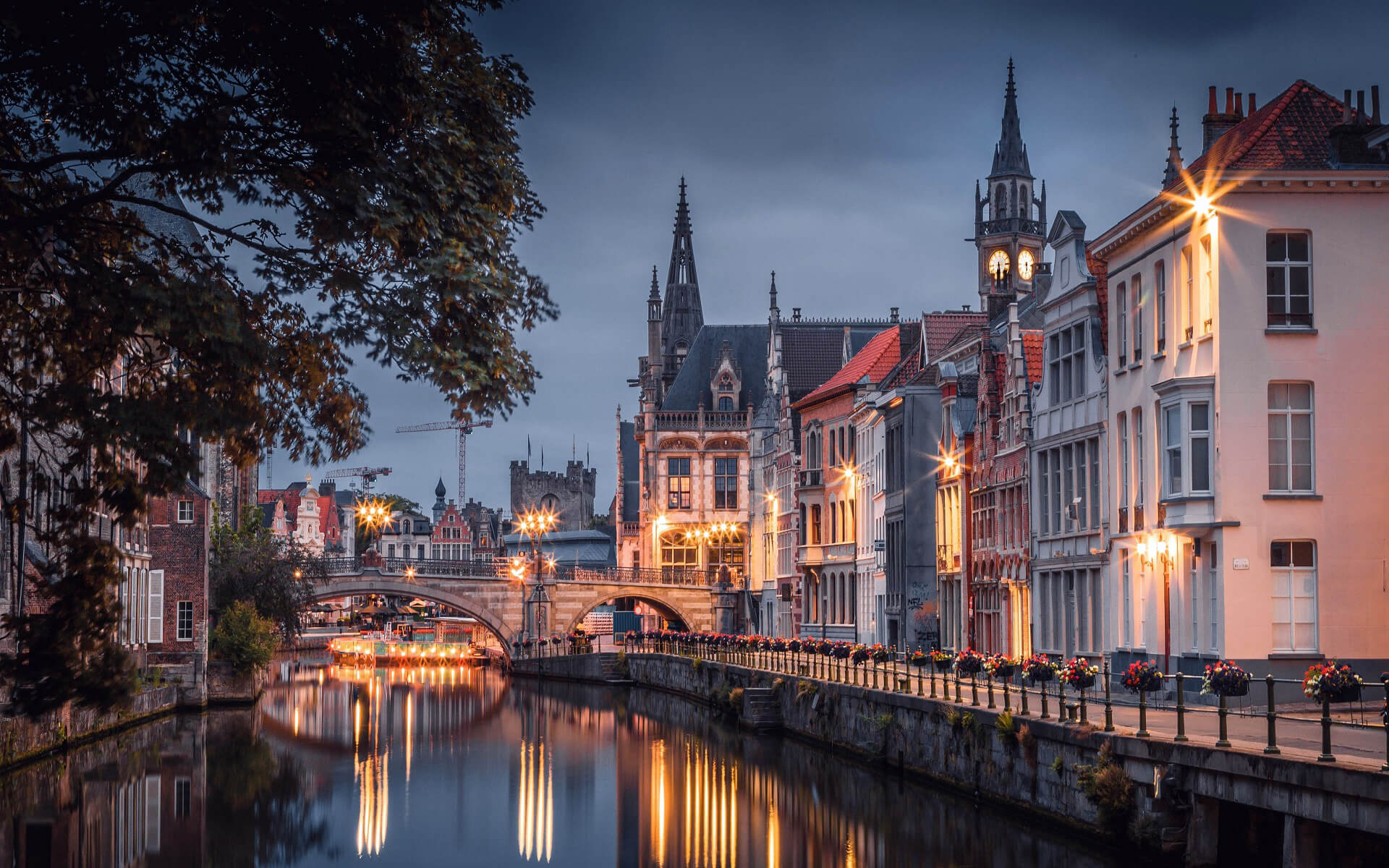 Ghent is a city and municipality in Belgium’s Flemish Region. It is the capital and biggest city in the province of East Flanders, as well as the second largest municipality in Belgium after Antwerp. The city began as a village at the confluence of the rivers Scheldt and Leie and grew to become one of the biggest and wealthiest towns in northern Europe in the late Middle Ages, with 50,000 residents in 1300. It is a port city as well as a university town.

Ghent and the neighbouring towns of Afsnee, Desteldonk, Drongen, Gentbrugge, Ledeberg, Mariakerke, Mendonk, Oostakker, Sint-Amandsberg, Sint-Denijs-Westrem, Sint-Kruis-Winkel, Wondelgem, and Zwijnaarde make up the municipality. Ghent is Belgium’s second biggest municipality by population, with 240,191 residents in the beginning of 2009. The metropolitan region, including the outside commuter zone, spans an area of 1,205 km2 (465 sq mi) and has a total population of 594,582 people as of 1 January 2008, ranking it fourth in Belgium. Daniel Termont, the current mayor of Ghent, heads a coalition of the Socialistische Partij Anders, Groen, and Open VLD.

Ghent (Dutch: Gent, French: Gand) is a Belgian city in East Flanders. Ghent is a city with a quarter-million people and a rich history. Ghent, on the other hand, has a comparatively high proportion of young people and a student population of 50,000.

Ghent was one of Europe’s wealthiest and most powerful towns throughout the Middle Ages. It was originally thought to be the second-largest city north of the Alps, behind Paris. Viewing the majestic architecture of churches and the homes of wealthy merchants reveals the influence of this rich history. The whole city center has been reconstructed in this manner, and it still exudes the feeling of a vibrant late-medieval city state. As a result of the city council’s decision to make the center car-free, it is today a highly welcome and open environment that impresses even the residents.

Unlike in Leuven, another university town in Flanders, youngsters are not the only ones who live there. Among the natives of Ghent, there is an unusual mix of foreigners who came to live there or artists. People become more tolerant and open-minded as a result of this blend. This attitude pervades all aspects of city life, more so than in smaller provincial cities or the larger metropolis of Antwerp.

Much of the city’s medieval architecture is still standing and has been meticulously conserved and renovated. Its central region is Belgium’s biggest car-free zone. The Saint Bavo Cathedral with the Ghent Altarpiece, the belfry, the Gravensteen fortress, and the magnificent buildings around the ancient Graslei port are also noteworthy. Ghent has achieved a great balance of comfort and history — it is not a city-museum. Ghent also has three béguinages and a number of churches, including the Saint-church, Jacob’s the Saint-Nicolas’ church, and the Saint-church. Michael’s

Louis Roelandt, Ghent’s most renowned architect, created the university hall Aula, the opera building, and the main courtroom in the nineteenth century. The university buildings (the Boekentoren or Book Tower) by Henry Van de Velde are notable examples of contemporary architecture. There are also a few theatres from various eras.

In 1998 and 1999, UNESCO designated the beguinages, as well as the belfry and adjacent cloth hall, as World Heritage Sites.

Ghent also has the Zebrastraat, a social experiment in which a totally refurbished location integrates life, economics, and culture.

The Museum voor Schone Kunsten (Museum of Fine Arts) in Ghent houses paintings by Hieronymus Bosch, Peter Paul Rubens, and many Flemish masters; the SMAK or Stedelijk Museum voor Actuele Kunst (City Museum for Contemporary Art) houses works by Joseph Beuys and Andy Warhol; and the Design Museum Gent houses masterpieces by Victor Horta and Le Corbusier. The Huis van Alijn (Family House of the Alijns) was formerly a beguinage and is now a folk art museum with theatre and puppet presentations for children. The Museum voor Industriele Archeologie en Textiel, or MIAT, showcases Ghent’s industrial strength with recreations of 1800s workplaces and stores, as well as actual spinning and weaving machinery from the building’s previous life as a weaving mill. The Ghent City Museum (Stadsmuseum, abbreviated STAM) is dedicated to documenting and interpreting the city’s history and people, as well as conserving the present for future generations.

Bakeries in Ghent and other East-Flanders districts offer a donut-shaped bun called a “mastel” (plural “mastellen”), which is essentially a bagel. “Mastellen” are also known as “Saint Hubert bread” since bakers bring their batches to the early Mass on the Saint’s feast day, November 3rd, to be blessed. It was formerly believed that blessed mastellen vaccinated against rabies.

Other local delicacies include praline chocolates from Leonidas, cuberdons or ‘neuzekes’ (‘noses’), cone-shaped purple jelly-filled candies, ‘babeluten’ (‘babblers’), hard butterscotch-like candy, and, on the hotter side, the famous ‘Tierenteyn,’ a hot but refined mustard with some affinity to French ‘Dijon’ mustard.

Stoverij is a traditional Flemish beef stew that is best when cooked with a big amount of brown ‘Trappist’ (strong abbey beer) and served with French fries. ‘Waterzooi’ is a local stew that was originally cooked from freshwater fish gathered in Ghent’s rivers and streams, but is now often made using chicken instead of fish. It is often served in a nouvelle-cuisine manner, with a huge pot on the side.

The city supports Donderdag Veggiedag, a meat-free day on Thursdays, with vegetarian cuisine promoted in public canteens for civil workers and elected councillors, in all city-funded schools, and promotion of vegetarian dining alternatives throughout town (through the distribution of “veggie street maps”). This effort is connected to the realization of the negative environmental consequences of meat production, which the Food and Agriculture Organization of the United Nations has determined accounts for roughly one-fifth of world greenhouse gas emissions.

Ghent has the most vegetarian restaurants per capita in the world.

The Gentse Feesten, I Love Techno in Flanders Expo, “10 Days Off” musical festival, International Film Festival of Ghent (including the World Soundtrack Awards), and Gent Festival van Vlaanderen are all held in the city (nl). In addition, every five years, a massive botanical show (Gentse Floralin) is held at Flanders Expo in Ghent, drawing a large number of tourists.

In 2008, the Festival of Flanders celebrated its 50th anniversary. It begins in Ghent on the second Saturday of September with the OdeGand City celebrations. There are 50 performances in various sites around the historic inner city, with 250 international performers performing. Similar events are held in other major Flemish cities as part of the Festival of Flanders (Antwerp with Laus Polyphoniae; Bruges with MAfestival; Brussels withKlaraFestival; Limburg with Basilica, Mechelen and Brabant withNovecento and Transit).

The city’s extensive parks might also be called tourist attractions. Ghent, in particular, has a natural reserve (Bourgoyen-Ossemeersen, 230 hectares) and a pleasure park (Blaarmeersen, 87 hectares).

The temperature in this region is warm, with little variation between highs and lows, and there is enough of rain all year. Ghent has a marine west coast climate, according to the Köppen Climate Classification system.

Ghent’s port, located on the city’s northwestern outskirts, is Belgium’s third biggest port. The Ghent-Terneuzen Canal connects it to the Western Scheldt, near the Dutch port of Terneuzen. The port is home to major corporations like as ArcelorMittal, Volvo Cars, Volvo Trucks, Volvo Parts, Honda, and Stora Enso.

Ghent University and a variety of research-oriented enterprises, such as Ablynx, Innogenetics, Cropdesign, and Bayer Cropscience, are located in the city’s center and southern areas.

Ghent, the main city in East-Flanders, boasts a plethora of hospitals, schools, and commercial areas. Flanders Expo, Flanders’ largest event venue and Belgium’s second largest, is also situated in Ghent. Tourism is quickly becoming a key job in the region.

Find the “Club Plus” card if you wish to call North America. Do not be persuaded to buy any other card. They are commonly encountered at nightclubs (Nacht Winkels). A payphone can provide more than 200 minutes to North America for €5. This is fantastic since payphones are pretty expensive if you simply input money.

The number of Internet Cafes has increased dramatically in recent years, and it is now fairly simple to locate one within walking distance. The typical rate is between €1.50 and €3 per hour. There is also free wifi in the center on the Graslei. A wide range of wifi networks are offered at hotels, pubs, and snackbars, as mentioned above. In certain cases, in exchange for using their services. Ghent is very well-served by mobile networks; all major carriers have high-speed networks, and data roaming is accessible provided you have compatible devices.