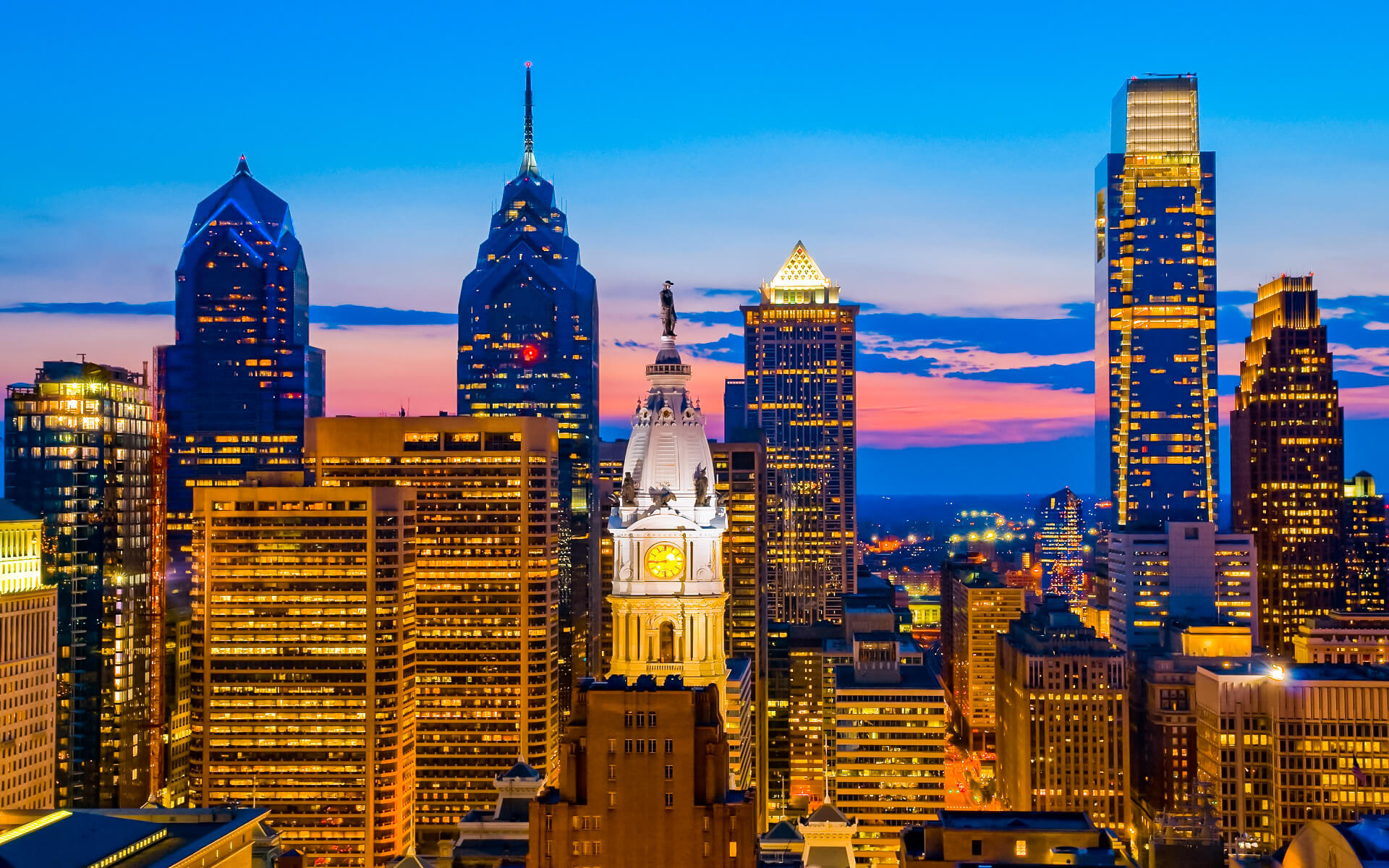 William Penn established the city in 1682 to serve as the capital of the Pennsylvania Colony. Philadelphia was critical to the American Revolution by serving as a meeting venue for the United States’ Founding Fathers, who signed the Declaration of Independence in 1776 and the Constitution in 1787. Philadelphia was one of the nation’s capitals during the Revolutionary War, serving as the interim capital of the United States while Washington, D.C., was being built. Philadelphia developed as a significant industrial town and railroad hub in the nineteenth century as a result of an inflow of European immigration. It became a popular destination for African-Americans during the Great Migration, with a population exceeding two million by 1950.

Due to comparable movements in the nation’s economy in the late 1960s, Philadelphia lost manufacturing enterprises and employment to lower-taxed parts of the United States and often to other countries. As a consequence, Philadelphia’s economic basis, which had traditionally been manufacturing, suffered a considerable downturn. Additionally, consolidation in a number of American sectors (particularly retail, financial services, and health care) lowered the number of corporations located in Philadelphia. These changes would have a negative economic effect on Philadelphia’s tax base and municipal government resources. Philadelphia struggled for years to adapt to these economic shifts, which were accompanied by large demographic changes as richer inhabitants migrated to outlying suburbs and more immigrants came into the city. Indeed, the city came dangerously close to bankruptcy in the late 1980s. Gentrification started in the late 1990s, transforming numerous areas and reversing a decades-long trend of population decrease.

Philadelphia is the fifth most populous city in the United States, situated in southeastern Pennsylvania in the Mid-Atlantic area. Frequently abbreviated “Philly,” the city is contiguous with Philadelphia County. Due to Philadelphia’s proximity to the borders of New Jersey and Delaware, its metropolitan area covers counties in Pennsylvania, New Jersey, and Delaware.

Philadelphia, historically the nation’s capital, has played a pivotal part in the nation’s history and culture. Its colonial heritage and architecture are almost unmatched, as are its colleges, museums, businesses, and labs. Additionally, the city has grown in prominence as a cultural and artistic hub during the last several decades. As Philadelphia recovers from the devastation of the mid-20th century, the city is today seen as a model for sustainable urban expansion and a surprisingly cheap sanctuary for people seeking the best of metropolitan American life without the luxury or pretension associated with other East Coast towns.

Often referred to as the “Cradle of America” and at one point dubbed the “new Athens,” is the birthplace of America’s modern democracy. Created in the late 17th century by William Penn, the city’s name translates as “City of Brotherly Love” and has served as a beacon of liberty from its beginnings; initially founded by Quakers, the colony fostered religious freedom among its citizens, in sharp contrast to the England of the time.

Philadelphia is home to several national historical sites associated with the United States’ foundation. Independence National Historical Park, one of the country’s 22 UNESCO World Heritage Sites, serves as the focal point for these historical sites. The city’s most notable sights are Independence Hall, where the Declaration of Independence was signed, and the Liberty Bell. Other significant locations include Edgar Allan Poe’s, Betsy Ross’, and Thaddeus Kosciuszko’s residences, as well as early government structures such as the First and Second Banks of the United States, Fort Mifflin, and the Gloria Dei (Old Swedes’) Church. Philadelphia alone is home to 67 National Historic Landmarks, the third-highest number of any city in the nation.

Philadelphia is located on the northernmost edge of the humid subtropical climatic zone; it has several characteristics of a humid continental climate and a four-season climate. Winters are very cold and often snowy, with temperatures averaging about 32°F (0°C) in the cooler months. The average annual snowfall is 24 inches (59 cm), with the majority falling between December and March, but the area is occasionally hit by devastating blizzards that can dump up to half of that total or even more in a single day, as happened in 1996, when a single storm dumped 30.7 inches (78 cm) of snow on the city in just a few days.

Spring and autumn are rather nice, with temperatures ranging between 60 and 70 degrees Fahrenheit (15°C-25°C). Summers are hot and humid, and when the air temperature is around 90°F (32°C) and the humidity is high, the circumstances may become rather uncomfortable.

Philadelphia is located on the Fall Line, the dividing line between the Atlantic Coastal Plain and the Piedmont. The construction of the Fairmount Dam flooded the rapids on the Schuylkill River near East Falls.

Philadelphia’s economy is as diversified as its inhabitants. In Old City, the ‘Third Street Corridor,’ which runs between 3rd and Chestnut Streets to Vine Street, is home to a slew of independently owned enterprises in the arts, design, and fashion sectors. Since 1790, the Philadelphia Stock Exchange, America’s oldest, has been in operation. Additionally, numerous Fortune 500 firms are headquartered in the city, including Comcast (the nation’s biggest cable television and broadband Internet provider), CIGNA insurance, Aramark, and Lincoln Financial Group. The University of Pennsylvania, Children’s Hospital of Philadelphia, Thomas Jefferson University Hospital, and Temple University are the city’s major private employers. There are around 50 higher educational institutions in the area, making Philadelphia a sizable ‘college town.’

The federal government has a significant presence in Philadelphia, dating all the way back to the city’s founding as the nation’s first capital. A United States Mint is situated near Philadelphia’s historic center, as is the Philadelphia branch of the Federal Reserve Bank. As a result of this governmental presence, the city is home to a plethora of famous law firms and is regarded as one of the nation’s legal capitals.

The Pennsylvania Railroad, formerly the world’s biggest railroad business, continues to have an economic impact on Philadelphia under the Amtrak brand. 30th Street Station, Amtrak’s second busiest station, is located on the west bank of the Schuylkill River and employs a large number of Philadelphia residents in customer service, engineering, accounting, and information technology positions.

Numerous medical institutions, pharmaceutical corporations, and medical technology companies call Philadelphia and the surrounding area home, potentially making it the nation’s healthcare capital. Additionally, the Philadelphia region is home to a slew of virtual commerce companies, including QVC, Half.com (which was acquired by eBay), DuckDuckGo, and Monetate.

Houston, situated in Southeast Texas near the Gulf of Mexico, is the most populous metropolis in Texas and the fourth-most populated city in the...
Read more

Thessaloniki is the capital of Greek Macedonia, the administrative territory of Central Macedonia, and the Decentralized Administration of Macedonia and Thrace. Its nickname is...
Read more

Bilbao is a municipality and city in Spain, a significant metropolis in the province of Biscay in the Basque Country autonomous community. With a...
Read more

Bloemfontein is the capital city of the Free State province of South Africa, as well as the nation’s judicial capital. The other two national...
Read more

Ahmedabad is Gujarat’s biggest city and former capital. It is the administrative center of the Ahmedabad district as well as the location of the...
Read more

Melbourne is the capital and most populous city of Victoria, as well as the second most populated city in Australia and Oceania. The word...
Read more
Travel tips