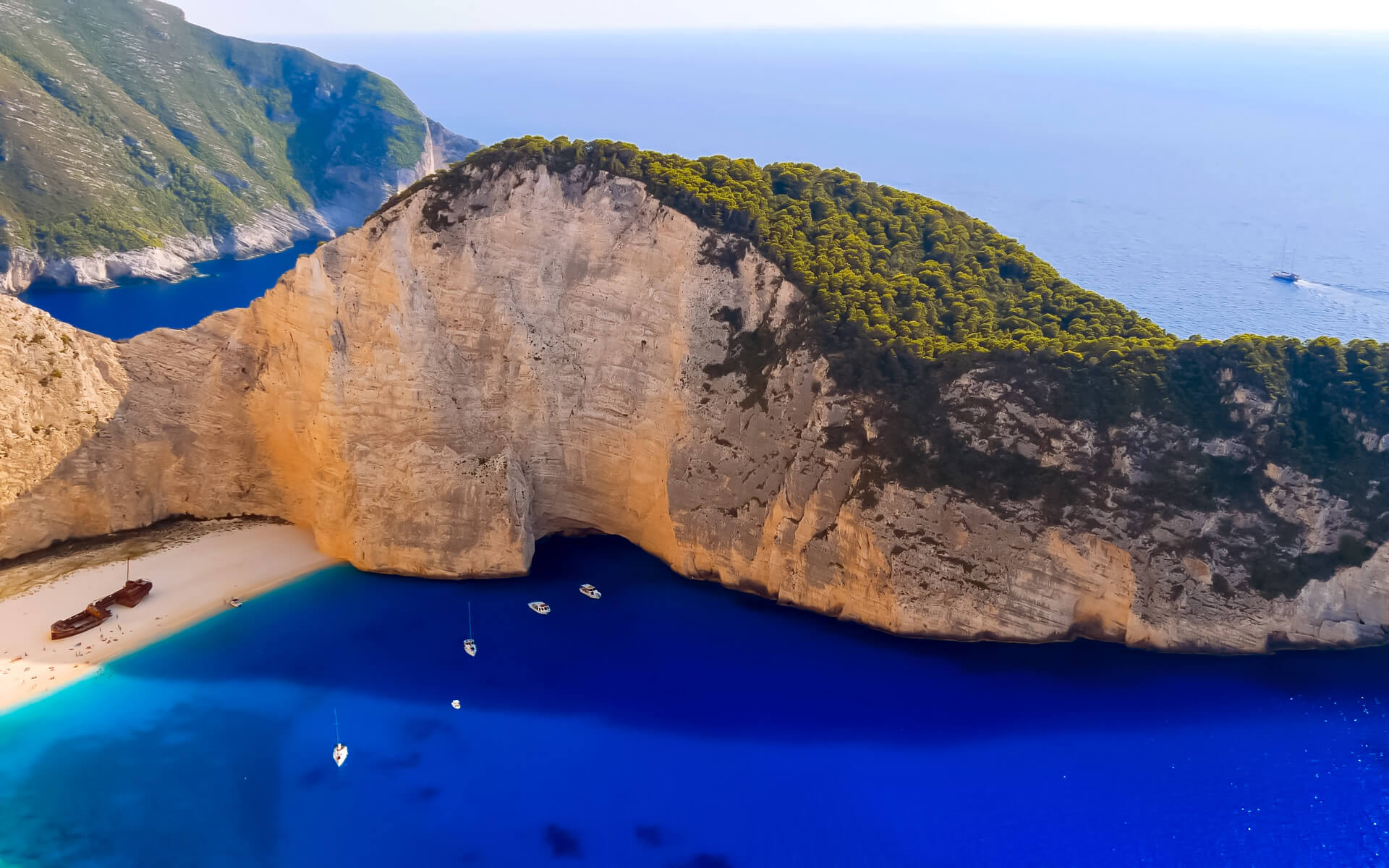 Zakynthos (Greek: Ζάκυνθoς), often known as Zante (its Italian name), is the third biggest island in the Ionian Sea, off Greece’s west coast. Zacynthos, the son of the mythical Arcadian chief Dardanos, is commemorated by the island’s name.

While Ios and Kos are known for their nightlife, and Rhodes and Crete for their families, Zakynthos falls somewhere in the middle. Because the west and north coastlines are highly hilly, with cliffs plummeting hundreds of feet straight into the sea, the bulk of the beaches, towns, and so on are located along the south and east coasts.

Because of the light winter rainfall, Zakynthos is an incredibly green island. The Venetians who seized it dubbed it Il fiore del Levante, or “the bloom of the Levant.” March-May is a particularly gratifying time to come since the island has less people, the Easter procession is held, and the island blossoms brilliantly with a plethora of bright flowers and lush green hills.

Zakynthos, like its neighbor Kefalonia, was severely damaged by the 1953 earthquake, and much of its exquisite Venetian architecture was regrettably lost as a result. As a result, ruins may still be seen in certain areas of the island. The major town was rebuilt from the ground up and has an eerie similarity to Venice’s San Marco Square. It’s definitely worth a look.

The stunning white cliffs that plummet into the turquoise waters near Keri must be seen to be believed; the water is very clear, and it is worthwhile to hire a boat to enjoy such beauties.

Zakynthos is located on the eastern Ionian Sea, about 20 kilometers (12 miles) west of the Greek (Peloponnese) peninsula. Kefalonia is about 15 kilometers (9 miles) to the north. It is the most southern of the major group of Ionian islands (not counting distant Kythira). Zakynthos is about 40 kilometers (25 miles) long and 20 kilometers (12 miles) broad, with a total area of 405.55 km2 (156.58 sq mi). It has a shoreline that stretches for around 123 kilometers (76 miles). The island has a population of 40,759 people, according to the 2011 census. Vrachionas, at 758 m, is the highest peak.

The island of Zakynthos is shaped like an arrowhead, with the “tip” (Cape Skinari) pointing northwest. The island’s western half is a high plateau, while the southwest shore is primarily made up of sharp cliffs. The eastern side is a densely populated fertile plain with long sandy beaches, broken up by a few isolated hills, most notably Bochali, which overlooks the city and the Vasilikos peninsula in the northeast. The peninsulas of Vassilikos to the north and Marathia to the south encircle the vast and shallow harbor of Laganas in the island’s southeast.

The town of Zakynthos, which has the same name as the prefecture, serves as the capital. It is located on the northern coast’s easternmost point. Aside from the official name, it is also known as Chora (i.e. the Town, a common denomination in Greece when the name of the island itself is the same as the name of the principal town). A ferry connects the port of Zakynthos to the port of Kyllini on the mainland. Another boat links the hamlet of Agios Nikolaos to the Kefalonian town of Argostoli. Marathonisi, Pelouzo, and Agios Sostis in the Laganas bay; Agios Nikolaos, at the namesake port on the northern point; and Agios Ioannis near Porto Vromi on the western coast are minor deserted islands included in the municipality and regional unit.

The island’s thick vegetation is a result of the island’s moderate Mediterranean climate and abundant winter rainfall. Olive oil, currants, grapes, and citrus fruit are the main agricultural products. Zante currant is a little delicious seedless grape endemic to the island. The Bay of Laganas is home to the Mediterranean’s first National Marine Park and a good breeding habitat for loggerhead sea turtles (Caretta caretta). The Bay of Laganas was badly endangered as a nesting site in the early 1980s, but largely to the efforts of MEDASSET founder and president Lily Venizelos, it was saved. Caretta caretta is a critically endangered species, exacerbated by the presence of deck chairs on their mating sites and the subsequent pollution. Every year in early June, female turtles go to the southern beaches to deposit their eggs on the sand.

The nest’s incubation period is around 55 days, after which time hatchlings escape from the nest and make their way to the sea. Their survival rate is very low; just one in every thousand hatchlings that enter the water survives to maturity. Each nest has about a hundred to one hundred and twenty eggs, each about the size and shape of a ping-pong ball. Female turtles begin to lay eggs when they are between the ages of twenty and thirty.