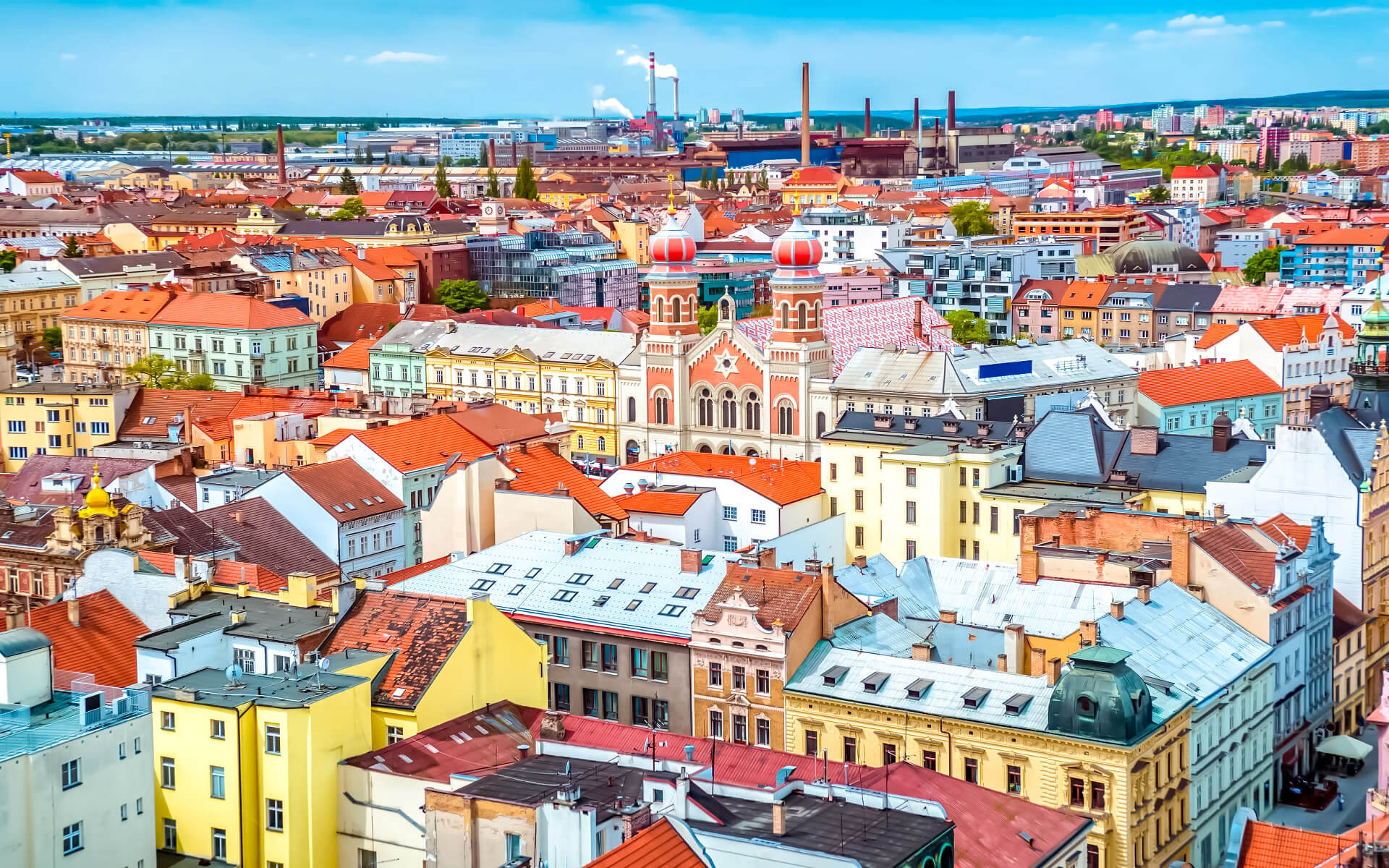 Plzeň, sometimes known as Pilsen in English and German, is a city in the Czech Republic’s western Bohemia region. Approximately 90 kilometers (56 miles) west of Prague.

The city is famous across the globe for Pilsner beer, which was invented there in 1842 by Bavarian brewer Josef Groll.

It is the fourth biggest city in the nation and the major city in West Bohemia, and it serves as a good starting point for visiting this part of the Czech Republic.

Pilsen is located in Bohemia, Czech Republic, Central Europe. It is the birthplace and home of the Pilsener (or pilsner) beer kind, which takes its name from the city.

It is the fourth biggest city in the nation and the major city in West Bohemia, and it serves as a good starting point for visiting this part of the Czech Republic.

Plzeň’s most notable landmarks include the Gothic St. Bartholomew’s Cathedral, built in the late 13th century, and whose tower, at 102 metres (335 feet), is the highest in the Czech Republic, the Renaissance Town Hall, and the Moorish Revival Great Synagogue, Europe’s second largest synagogue after Budapest’s Dohány Street Synagogue. There is also a 20-kilometer (12-mile) subterranean tunnel/cellar network, one of the longest in Central Europe. A portion of this network is exposed to the public for visits of around 750 meters (2,500 feet) in length and down to a depth of 12 meters (39 ft).

The old water tower, built in 1532, was incorporated into the city’s defense system at Prague Gate. In 1822, another story was constructed in the French Imperial style. The Gothic entrance (dating from the 1500s) was erected in 1912, reclaimed from a destroyed home. A memorial plaque above the gateway honors Dr. Josef Skoda (a professor at Vienna University), who was born next door on December 10, 1805.

Plzeň is also widely known for its breweries, Pilsner Urquell (since 1842) and Gambrinus (since 1869), both of which are now owned by South African Breweries. The Plzesk Prazdroj brewery tour, where tourists may learn about the history of beer, is a famous tourist destination. The pilsener beer style originated in Plzeň in the nineteenth century.

Plzeň, together with Mons, Belgium, was designated as a European Capital of Culture in 2015.

Pilsen has two official tourist information offices. Begin your Pilsen tour by going to them (preferably the major one on the námst Republiky), learning about current happenings, and obtaining a free map of the city. Both offices are open everyday from 9:00 a.m. to 5:00 p.m. (until 19.00 between April and September).

Plzeň is a center of intellectual, commercial, and cultural activity in the Czech Republic’s western region. The Faculty of Law, Faculty of Mechanical Engineering, and Faculty of Applied Science of the University of West Bohemia in Plzeň are particularly well-known.

Since the late 1990s, the city has seen a significant increase in international investment. Plaza Centers, an Israeli mall developer, constructed the Pilsen Plaza in 2007, a 20,000-square-metre (220,000-square-foot) commercial mall and entertainment center that included a multiplex theater from Cinema City Czech Republic.

Plzeň generates over two-thirds of the Plzeň Region’s GDP while having just 29.8 percent of the population. According to these estimates, Plzeň has a total GDP of about $7.2 billion and a per capita GDP of $44,000. While commuters contribute to some of this, it is one of the most wealthiest cities in the Czech Republic.

The koda firm, founded in Plzeň in 1859, has been a key part of Austro-Hungarian, Czechoslovak, and Czech engineering, as well as one of Europe’s largest armaments companies. During the Communist period (1948–1989), the company’s output was geared toward the demands of the Eastern Bloc. Disarray in the post-Velvet Revolution period, as well as failed attempts to attract new Western markets, resulting in sales issues and indebtedness. Following a massive reorganization, the firm currently has just two major subsidiaries: koda Transportation (locomotives, subterranean trains, and trams, which have been sold to Portland, Oregon; Tacoma, Washington; Seattle, and Sardinia) and koda Power (turbines), which is now controlled by the UK corporation.

Many multinational firms, like Daikin and Panasonic, currently have industrial operations in Plzeň. There has been substantial talk about redeveloping the enormous parts of the koda factory that are no longer in use by the corporation.

Many hotels provide Internet access, so check with the front desk first. In Pilsen, there are various Internet cafes to choose from.