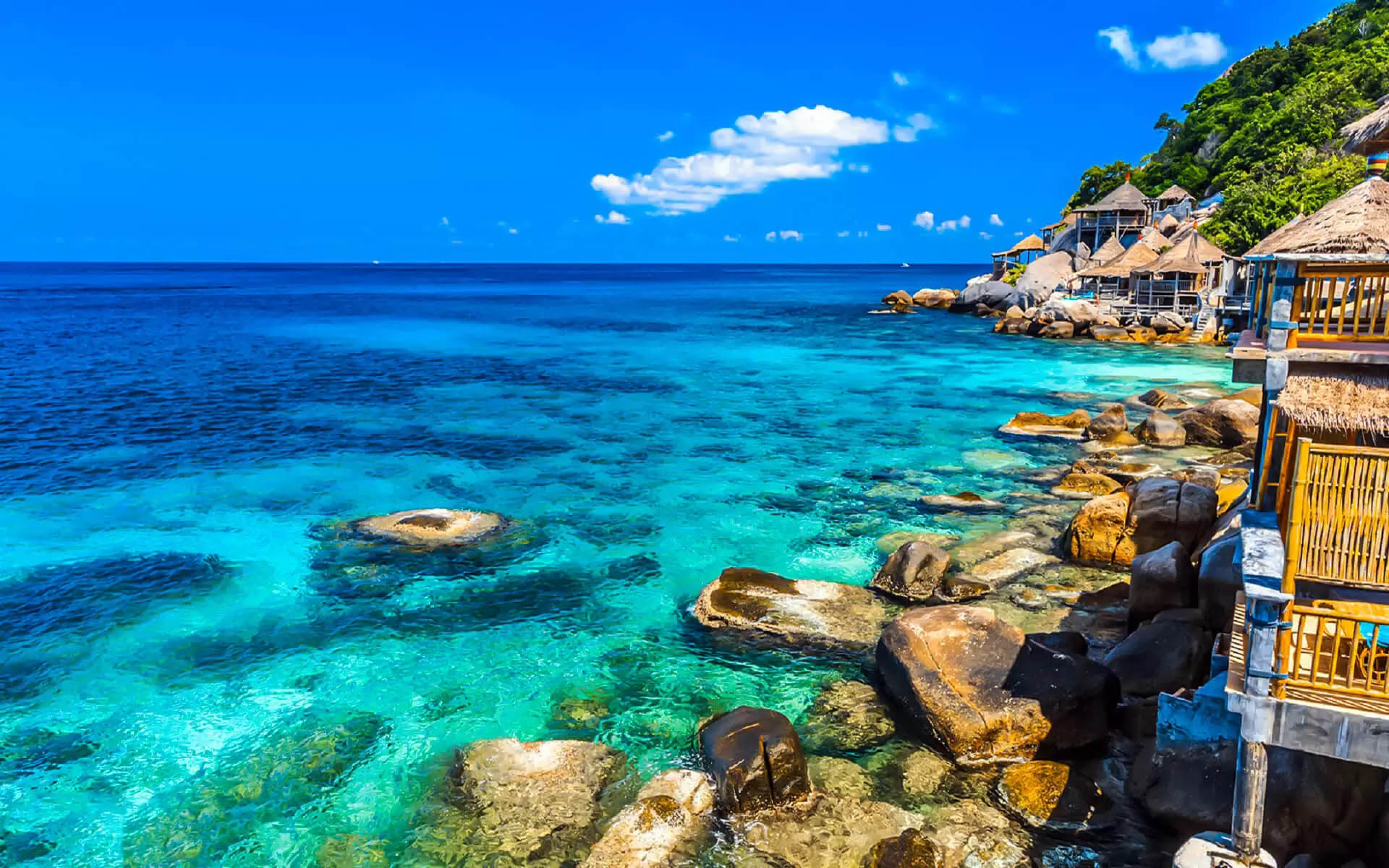 Ko Tao (also spelled Koh Tao, meaning “Turtle Island”) is a Thai island that is part of the Chumphon Archipelago off the western coast of the Gulf of Thailand. It has a total size of around 21 km2. Administratively, it is part of Surat Thani Province’s district (amphoe) (as of 2013). Its official population in 2006 was 1,382. Ban Mae Hat is the principal village.

The island’s economy is nearly entirely based on tourism, particularly scuba diving.

The original inhabitants called the island Ko Tao given the turtle-like shape of the island. The island also serves as an important nesting place for hawksbill and green turtles. Tourism development has harmed the health of these areas, but a breeding effort organized in 2004 by the Royal Thai Navy and KT-DOC, a coalition of local scuba diving centers, has restored hundreds of baby turtles to the island’s environment.

Ko Tao was originally a site of imprisonment for political prisoners. Today, it’s a popular destination for divers and those looking to escape the noise and bustle of Ko Samui or the insanity of the Full Moon Party on Ko Pha Ngan. The island caters to more wealthy divers rather than travelers on a budget. As a result, you won’t find any affordable food vendors here. There are little ocean currents, and there are several diving sites, dive shops, dive schools, and resorts. Activities other than diving are becoming more popular, and the cuisine and nightlife are among the finest in the Gulf of Thailand.

Ko Tao is a tiny island of around 21 km2 that attracts over 100,000 people each year. This is a large number of visitors for a tiny island with minimal sanitary facilities. Everything that cannot be burnt must be transported to the mainland. There is no sanitation agency to keep the roads and other public spaces clean, so don’t drop your trash carelessly. Avoid using the superfluous plastic bags that are handed out blindly with almost every transaction. Don’t squander water or power, which are both limited resources.

The peak seasons in Ko Tao are December-March and July-August. It is also a favorite location among Thais, therefore Thai vacations might be practically completely booked.

Scuba diving and snorkeling are popular activities on the island, as are hiking, rock climbing, and bouldering. The most popular tourist destination is Sairee on the west coast, which features a 1.7-kilometer white sandy beach broken only by a few massive rocks and a sprinkling of medium-priced motels and eateries. Chalok Baan Khao, in the island’s south, is becoming more popular as an option for people looking to avoid the crowds. A rising number of climbers are drawn to the granite boulders found in the woods and on the beaches of Ko Tao.

Ko Tao is less developed than Ko Samui and Ko Pha Ngan, but it is becoming more popular, particularly with the mid-20s backpacker culture looking for reasonably priced scuba diving certification. For the last two years, the island’s demographics have experienced a rise in age, with many guests who first visited the island over 10 years ago now returning with their families.

Diving conditions have improved substantially in recent years as a result of the diving community’s ongoing teaching of locals. The 1997 El Nio weather pattern prompted warming of the seas, resulting in the disappearance of many shallow corals around the island. The recuperation has been quick and remarkable since then. Scuba diving on Ko Tao is currently among the greatest in the Gulf of Thailand. And, with the assistance of the island conservation organization Save Koh Tao, the island’s environmental outlook is improving.

For numerous decades, the island’s tourism and development have increased gradually, with public infrastructure sometimes trailing far behind. Electricity and fresh water are often in short supply, and solid and liquid waste disposal is insufficient. As a result of these factors, tourists to Koh Tao are actively urged to preserve resources and patronize ecologically friendly companies and resorts.

As one of the world’s most popular diving locations, the detrimental consequences of diving on coral reef health surrounding Koh Tao are receiving more attention. Divers visiting the island should be extremely cautious about adhering to the required code of conduct for diving/snorkeling in coral reef regions, especially avoiding touching the reef or corals in any manner. Natural reasons, along with overuse of some locations, have resulted in an increase in the population of corallivores like as Drupella snails and Crown-of-thorns starfish across the island in recent years. A Marine Zoning and Regulations Master Plan for the island was prepared in 2012 and later became local legislation, however the beneficial impacts of greater management have yet to be realized in terms of the health of reef regions.

Chumpon Pinnacle, a diving spot to the west of the island, is popular with divers looking for both whale sharks and bull sharks. However, as water temperatures have risen over the previous year, a large number of bull sharks have relocated to colder seas. Over 130 hard coral types and 223 reef fish species from 53 families may be found on the island.