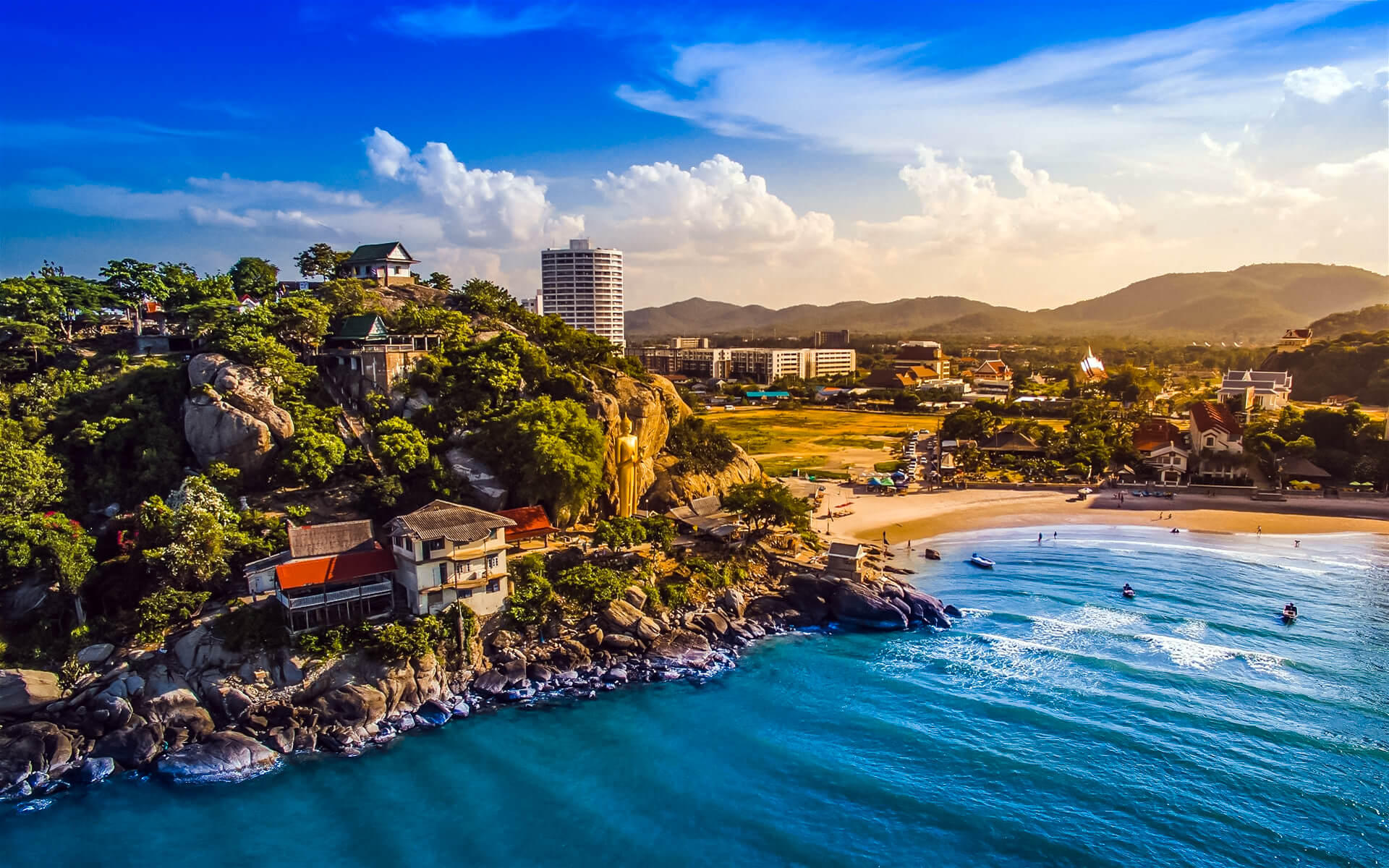 Hua Hin is a beach resort city in Thailand with a population of around 50,000 (2012). It is popular with Thais and has grown fairly trendy as a weekend getaway area for Bangkok locals, as well as with foreigners and as an expat retirement or vacation home site. It is located 195 kilometers from Bangkok.

Despite fast development, municipal and provincial officials have pledged to prevent the type of hot blight that has plagued other Thai beach destinations.

Hua Hin, popularized as a resort by King Prajadhipok in the early 1920s, is intimately identified with the Thai royal family and is a tranquil and relaxing coastal resort suitable for family holidays, located a fair 2.5 hours drive south from Bangkok. Until 1934, it was known as Samore Riang (), which translates as “rows of rocks.”

The peaceful fishing town was transformed into a royal retreat, and as a result, it gained popularity among Siam’s royalty and upper classes. Prajadhipok erected his Klai Kangwon (“Far from Worries”) Palace in 1928. As of 2007, Klai Kangwon is the current king’s full-time home and is not available to tourists, while the outside palace grounds are open to walkers and joggers from 16:00 to 19:00 everyday (wear shoes, have sleeved shirts that cover at least your upper arms and bring your passport).

The 6 km long beach is more beautiful and clean than Pattaya’s, and the water is generally clean. During high tide, however, the majority of the beach might totally vanish along some areas of the shore. Visitors may enjoy golf, spas, caverns, peaks, waterfalls, shops, seafood, and adjacent national parks in addition to sunbathing, snorkeling, and swimming. The town is clean, welcoming, and relaxed, making it excellent for families and couples.

Tourist information may be obtained near the train station on the junction of Petchkasem Rd and Damnerkasem Rd (Soi 76).

There is also a tourist information center at the clock tower in the center of town, right close to a Starbucks for those in need of a coffee fix. Even though it is not the official bus terminal, many of the large buses will stop here to dump and pick up passengers, making it an ideal area to catch a motorbike taxi or tuk-tuk.

Hua Hin has a tropical climate with high humidity and rain on occasion. It is, however, usually pleasant and may be enjoyed all year. In general, the ideal time of year to visit Hua Hin is during the mild season, which runs from November to February, but for those who like it hot, the hot season runs from March to May. (temperature gets up into the higher 30s). The rainy season (though it does not rain every day) lasts from June through October, with September being the wettest of all. Those who dislike rain should be aware that rain in Thailand frequently falls in short, intense spurts. It seldom rains for extended periods of time.

There is also a city-wide free Wi-Fi service, albeit speeds are poor and a signal is difficult to find outside of the core region.