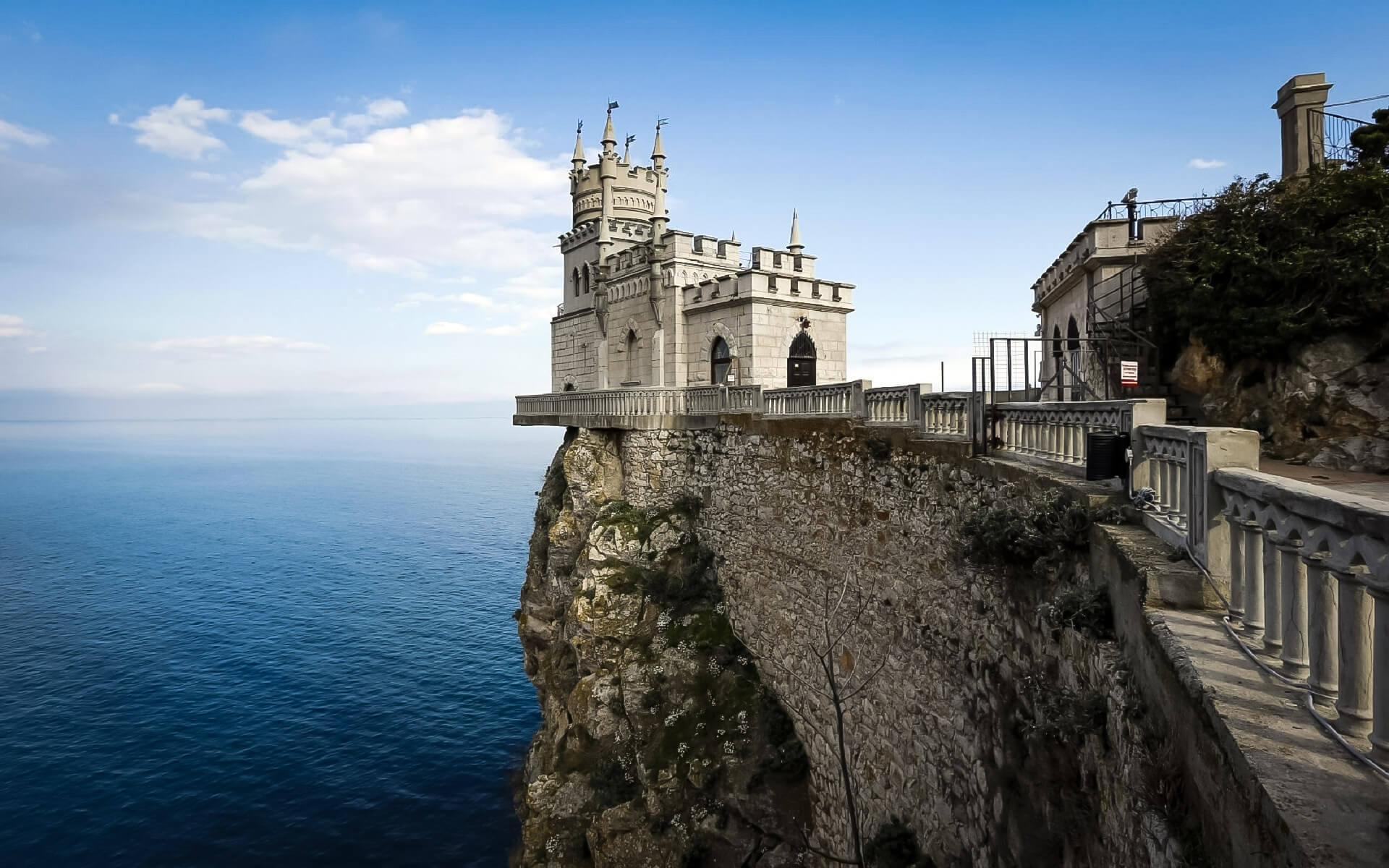 The Crimean Peninsula is a large land mass on the Black Sea’s northern shore, nearly fully encircled by the Black Sea and the smaller Sea of Azov to the northeast. The peninsula is situated south of Ukraine’s Kherson region and west of Russia’s Kuban region. It is linked to Kherson Oblast by the Perekop Isthmus and separated from Kuban by the Kerch Strait. The Arabat Spit is situated to the northeast, a thin stretch of land separating the Sivash lagoon system from the Sea of Azov.

Crimea (or the Tauric Peninsula, as it was known from antiquity until the early modern era) has traditionally been located at the crossroads of the classical world and the Pontic–Caspian steppe. The ancient Greeks, Persians, Romans, Byzantine Empire, Crimean Goths, Genoese, and Ottoman Empire colonized its southern fringe, while its interior was occupied by a changing cast of invading steppe nomads and empires, including the Cimmerians, Scythians, Sarmatians, Goths, Alans, Bulgars, Huns, Khazars, Kipchaks, Mongols, and the Golden Horde. During the 15th to 18th centuries, Crimea and neighboring lands were unified under the Crimean Khanate.

The Russian Empire seized Crimea in 1783. Following the Russian Revolution of 1917, Crimea became an independent republic inside the Russian Soviet Federative Socialist Republic in the USSR, however it was eventually demoted to the Crimean Oblast during World War II.

Nikita Khrushchev moved the Crimean Oblast to the Ukrainian Soviet Socialist Republic in 1954 in order to strengthen the “union of Russians and Ukrainians” and the “great and indissoluble goodwill” between the two peoples. In 1991, it was renamed the Autonomous Republic of Crimea inside the newly independent Ukraine, with Sevastopol having its own government within Ukraine but outside the Autonomous Republic.

Local governments held a vote on “reunification with Russia” in March 2014.

This region has a variety of landscapes, including the Crimean steppe (or prairie) to the east and north, Feodosia’s sandy beaches, undulating hills of vineyards and fruit trees, Bavarian-style castles clinging to cliffs plunging into the warm sea, and forested mountain ranges with fabled cave cities to the west.

Crimea’s rise as a tourist destination started in the second part of the nineteenth century. The expansion of transportation networks attracted a large number of visitors from the Russian Empire’s core regions. A tremendous development of palaces, villas, and dachas occurred at the beginning of the twentieth century, the majority of which still exist. These are some of the most popular tourist sites in Crimea. There are several Crimean folklore concerning well-known tourist destinations that pique the interest of visitors.

When the Soviet authorities recognized the potential of the curative qualities of the surrounding air, lakes, and therapeutic muds, a new period of tourism growth started. Crimea became a “health” destination for Soviet workers, and hundreds of thousands of Soviet tourists visited the region.

Artek is a former Young Pioneer camp on the Black Sea in Hurzuf, near Ayu-Dag, that was founded in 1925. It had a total size of 3.2 km2 in 1969. The camp was made up of 150 structures. Due to the warm temperature, Artek was an all-year camp, unlike most of the young pioneer camps. During its existence, Artek was seen as a privilege for Soviet children as well as youngsters from other communist nations. During its height, Artek hosted 27,000 youngsters each year. Between 1925 and 1969, 300,000 children were housed in the camp. Its prominence faded when the Young Pioneers were disbanded in 1991, but it remained a popular holiday resort.

The overall population of the Autonomous Republic of Crimea and Sevastopol was estimated to be 2.352 million in 2007, significantly lower than the 2.413 million counted in the 2001 Ukrainian Census.

According to the 2001 census, 77 percent of Crimean residents identified Russian as their native tongue, while 11.4 percent identified Crimean Tatar and 10.1 percent identified Ukrainian. However, the Crimean Tatar language was considered to be on the verge of extinction in 2013, with just around 15 schools teaching it at the time. Turkey gave the most assistance to Tatars in Ukraine, who had been unable to handle the issue of education in their home language in Crimea by modernizing the schools.

Since the early twentieth century, the ethnic makeup of Crimea’s population has shifted considerably. According to the 1897 Russian Empire Census for the Taurida Governorate, there were 196,854 Crimean Tatars (13.06 percent), 404,463 Russians (27.94 percent), and 611,121 Ukrainians (42.21 percent). However, these figures included Berdyansky, Dneprovsky, and Melitopolsky uyezds, which were located on the mainland rather than in Crimea. The population figure omitting these uyezds is shown in the table below.

Crimean Tatars, a primarily Muslim ethnic minority that made up 12.1 percent of the population in 2001, first appeared in Crimea in the late Middle Ages, after the establishment of the Crimean Khanate. As a measure of collective punishment, Joseph Stalin’s administration forcefully exiled Crimean Tatars to Central Asia on the pretext that they had established pro-German Tatar Legions. Crimean Tatars started to return to the area after the demise of the Soviet Union. According to the 2001 Ukrainian population census, ethnic Russians make up 58% of the Crimean population, while ethnic Ukrainians make up 24%.

Historically, Jews in Crimea were known as Krymchaks and Karaites (the latter a small group centered at Yevpatoria). The Taurida Governorate had a Jewish population of 4.20 percent in 1879, not counting a Karaite population of 0.43 percent. During the Nazi occupation, the Krymchaks (but not the Karaites) were targeted for destruction.

In 1939, there were 60,000 Germans in Crimea. During WWII, they were forcefully deported on Stalin’s orders because they were considered a possible “fifth column.” This was one of the 800,000 Germans who were transferred inside the Soviet Union during the Stalinist era. According to the 2001 Ukrainian census, there are just 2,500 ethnic Germans (0.1 percent of the population) in Crimea.

During the summer, the weather in Crimea is fairly Mediterranean. Expect hot weather with frequent thunderstorms that come and go. At night, it’s hot and humid. In the winter, snow may blanket the mountains, making routes almost inaccessible.

Crimea, with a land area of 27,000 km2 (10,425 sq mi), is situated on the northern shore of the Black Sea and the western coast of the Sea of Azov, with the single land boundary shared with Ukraine’s Kherson Oblast to the north.

The Sivash, or “Rotten Sea,” a wide series of shallow lagoons, is the natural boundary between the Crimean Peninsula and the Ukrainian mainland. The peninsula is linked to the Kherson Oblast’s Henichesk Raion, and thus to the European mainland, via the Isthmus of Perekop, a 5–7 kilometer (3.1–4.3 mi) broad stretch of land, as well as bridges across the small Chongar and Henichesk straits. The northern section of Arabat Spit, comprising the two rural settlements of Shchaslyvtseve and Strilkove, is officially part of Henichesk Raion in Kherson Oblast. The Kerch Peninsula is located on the peninsula’s eastern extremity, separated from the Taman Peninsula on the Russian mainland by the Kerch Strait, which links the Black Sea to the Sea of Azov and has a width of 3–13 kilometers (1.9–8.1 mi).

The peninsula is separated into three geographical zones: steppe, mountains, and southern shore.

The Crimean peninsula is made up of several smaller peninsulas, including the previously mentioned Kerch peninsula, Heracles Peninsula, Tarkhankut Peninsula, and many more. Crimea also has several headlands, including Cape Priboiny, Cape Tarkhankut, Sarych, Cape Fonar, Kazantyp, and Cape Akburun, among many more.

Several bays and harbors dot the Crimean coastline. These ports are located west of the Perekop Isthmus by the Bay of Karkinit and southwest by the open Bay of Kalamita, which connects the port towns of Eupatoria and Sevastopol.

The Kerch Peninsula is connected to the Crimean peninsula by the Isthmus of Yenikale and is bounded to the north by the Bay of Arabat (interrupted by the approaching Arabat Spit) and to the south by the Bay of Caffa (arching eastward from the port of Feodosiya).

A comparable series of mountains, the Crimean Mountains, flanks the southeast coast at a distance of 8–12 kilometers (5.0–7.5 mi) from the sea. Secondary parallel ranges flank these mountains.

The main range of these mountains rises abruptly from the Black Sea’s deep base to a height of 600–1,545 metres (1,969–5,069 ft), commencing at the peninsula’s southwest tip, known as Cape Fiolente. This cape was reported to be adorned with the temple of Artemis, where Iphigeneia is fabled to have served as priestess. The tallest waterfall in Crimea is Uchan-su, which is located on the south slope of the highlands.

Tourism and agriculture are the two most important sectors of the contemporary Crimean economy. The majority of industrial plants are located in the republic’s northern regions. Among the important industrial cities are Dzhankoy, which has a substantial railway link, Krasnoperekopsk, and Armyansk. The tourism business has experienced significant losses since Russia’s invasion of Crimea in early 2014, as well as the accompanying sanctions targeting Crimea. The number of tourists declined by 35% in the first half of 2015 compared to the same time in 2014.

Food production, chemical areas, mechanical engineering and metal works, and fuel generation businesses are among the most prominent in Crimea. Food production accounts for 60% of the industrial market. There are 291 big industrial firms and 1002 small commercial enterprises in total.

Cereals, vegetable cultivation, gardening, and wine production are all common in the area, notably in the Yalta and Massandra districts. Cattle breeding, poultry keeping, and sheep breeding are all examples of livestock production. Since ancient times, the Crimean Peninsula has also produced salt, porphyry, limestone, and ironstone (found near Kerch).

The republic’s annual GDP was $4.3 billion in 2014 (500 times lower than Russia’s economy). The average monthly pay was $290. The budget deficit was one billion dollars.