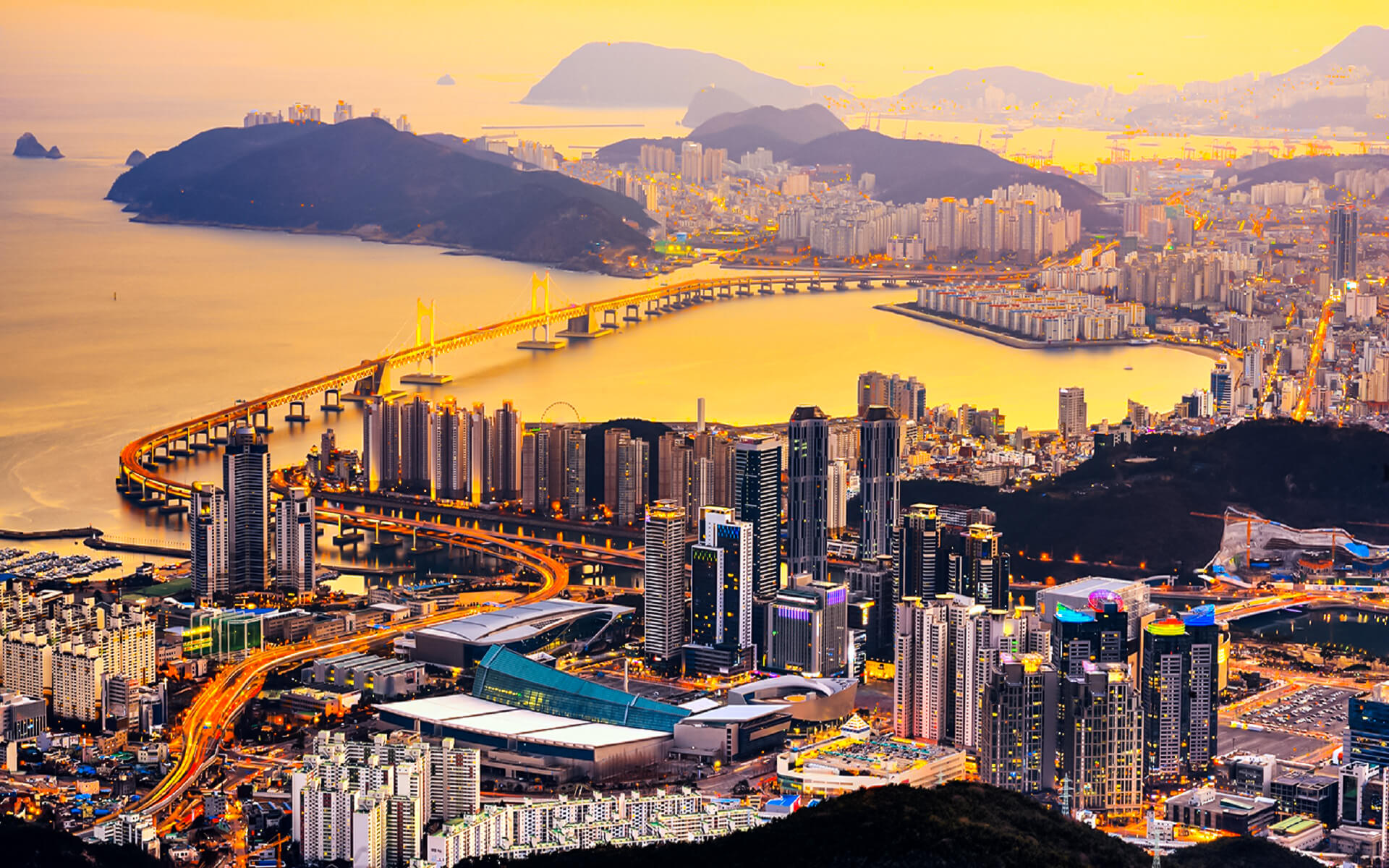 The city is the cultural, educational, and economic heart of the region, located inside South Korea’s biggest industrial area, “The Southeast Economic Zone” (which includes Busan, Ulsan, and South Gyeongsang Province). It is South Korea’s biggest port city and the world’s sixth busiest seaport in terms of cargo tonnage. The city’s most heavily populated sections are located in a series of small valleys between the Nakdong and Suyeong rivers, with mountains separating the majority of the districts. It is administratively classed as a Metropolitan City. The metropolitan region of Busan is split into 15 main administrative districts and one county.

Busan hosted the 2002 Asian Games as well as APEC 2005 Korea. It was also one of the host cities for the FIFA World Cup in 2002, and it serves as a hub for foreign conferences in Korea. On November 14, 2005, the local officials formally declared their proposal to host the Summer Olympics Games in 2020. Following Pyeongchang’s successful campaign for the 2018 Winter Olympics, Busan is contemplating vying for the Summer Olympics in 2028 or 2032.

Busan has a wide range of antique and souvenir stores, as well as distinctive restaurants, sights, and lodging.

PARKS, BEACHES, AND POINTS OF INTEREST

Nampo-dong is a renowned retail and café neighborhood in the city center. Many cafés, pubs, and restaurants attract college students and youngsters in the neighborhood around Pukyong National University and Kyungsung University.

Busan is known as Korea’s summer capital because its six beaches draw visitors from all across the nation. The beach in Haeundae is lined by luxury hotels and a carnival boardwalk. Cafes, bars, and restaurants along Gwangalli Beach, as does the Grand Gwangan Bridge. Dadaepo Beach on the city’s western outskirts and Songdo Beach on the city’s southern outskirts are two more beaches.

To the west, Geumjeongsan is a favorite weekend hiking destination for Busan locals. To the north, the areas around Pusan National University (commonly known as PNU, which is one of Korea’s most prestigious national schools of higher learning) contain student theaters, cafés, pubs, and restaurants, as well as open-air cultural street performances on weekends. Beomeosa, the city’s primary Korean Buddhist temple, is nearby.

The Busan Tower, Yongdusan Art Gallery, and the Busan Aquarium are all located in Yongdusan Park, which spans 69,000 square meters/17 acres (7 hectares). The park is home to over seventy different tree species and is a popular tourist attraction, hosting a variety of cultural events throughout the year.

Dongnae-gu is a rich and historic neighborhood. Dongnae Oncheon is a natural spa resort with several spas, tourist hotels, restaurants, clubs, and retail centers. Many of the eateries in the neighborhood rely on family recipes. Chungnyeolsa is a Confucian temple dedicated to troops who perished during the 16th century fight at Dongnae Fortress against the Japanese.

Taejongdae is a natural park on the island of Yeongdo with spectacular cliffs overlooking the open sea.

Many stores cater to the local Russian community as well as the sailors of foreign ships in the area named as “Foreigners’ Shopping Street,” but generally referred to as “Texas Street” near part of the Port of Busan and close to the front entrance to the Busan Train Station (). The region was formerly home to the local Chinatown, and it still has a Chinese school.

The Busan Aquarium, situated on Haeundae Beach, is South Korea’s biggest aquarium. The temple of Haedong Yonggung is one of three holy sites associated with the Goddess Buddha. It is placed directly on the beach. It is surrounded by a mountain in the front and the sea in the rear.

Gamcheon-dong is a secret hillside region inside the city with high, sweeping views of the ocean and brilliantly painted residences. It is situated west of Nampo-dong.

In 2005, it also hosted the 2nd Asia Song Festival, which was organized by the Korea Foundation for International Cultural Exchange.

In 2012, Hendrik Beikirch, a German artist, collaborated with Public Delivery to create Asia and the world’s highest mural.

Busan, located on the Korean Peninsula’s southeasternmost point, features a colder variant of a humid subtropical climate (Köppen climate classification Cwa). Extremely hot or cold temperatures are uncommon. Because to the maritime impact, the months of May through July, late spring and early summer, are often cooler than inland places. Late summer and early autumn, August and September, are often hot and humid, and the city may be hit by typhoons and wet. Super Typhoon Sarah came over the city’s shore on September 15, 1959, causing severe destruction. Typhoon Maemi, an extraordinarily violent typhoon on September 12, 2003, also damaged ships and buildings and killed over 48 people.

The months of October and November are often the most pleasant, with bright sky and mild temperatures. Winters are chilly, dry, and windy, although significantly milder than in other regions of Korea, with the exception of Jeju-do and some islands off the southern coast. Due to its position, Busan and the surrounding area get the least amount of snow compared to other parts of Korea. Snow occurs on just approximately 6 days per year on average. Because of the mountainous topography and commuters’ unfamiliarity with driving on snow, even a little amount of snow may effectively shut down this maritime city.

Busan is situated on the Korean Peninsula’s southeastern point. It is positioned on the shore, which influenced the growth of the whole city. It is the most distant of South Korea’s six major cities from Japan. As the crow flies, the distance from Busan to Tsushima Island, Japan, is around 49.5 km (31 mi), to Fukuoka, Japan, approximately 180 km (112 mi), and to Seoul, approximately 314 km (195 mi). Busan is bounded on the north and west by low mountains, and on the south and east by oceans. The Nakdong River Delta lies on the west side of the city, while Geumjeongsan, the city’s tallest peak, is on the north. The longest river in South Korea, the Nakdong, travels across the west and empties into the Korea Strait. The southeastern area, known as Yeongnam in Korea, includes both Gyeongsang Provinces as well as the three major cities of Busan, Daegu, and Ulsan. Ulsan is located northeast of Busan. The combined population surpasses 13 million people.

Busan is a global economic and financial hub known for its machinery, steel, shipbuilding, and marine sectors, as well as fashion, tourism, and trade fairs. Busan is the world’s fifth busiest seaport, and transportation and shipping are two of the most visible sectors of the local economy. Busan has established three container ports since 1978: Jaseungdae, Shinsundae, and Gamman. Busan is one of the world’s biggest ports, with an annual capacity of 13.2 million TEU shipping containers.

The Busan-Jinhae Free Economic Zone Authority, one of two in Korea, was established to reestablish Busan’s role as a historic international commercial center. The port welcomes ships from throughout the world, and the surrounding area hopes to be a regional financial center.

Korea Exchange (KRX), the country’s only securities exchange operator, is based in Busan.

In a 2011 worldwide rating by the International Congress and Convention Association, Busan is placed fourth among Asia’s top convention cities, behind only Singapore, Seoul, and Tokyo (ICCA).

Busan was placed 27th out of 83 cities and top 8 Asia/Pacific centers in the Global Financial Centres Index (GFCI) issued in March 2014 by the UK-based Z/Yen Group.