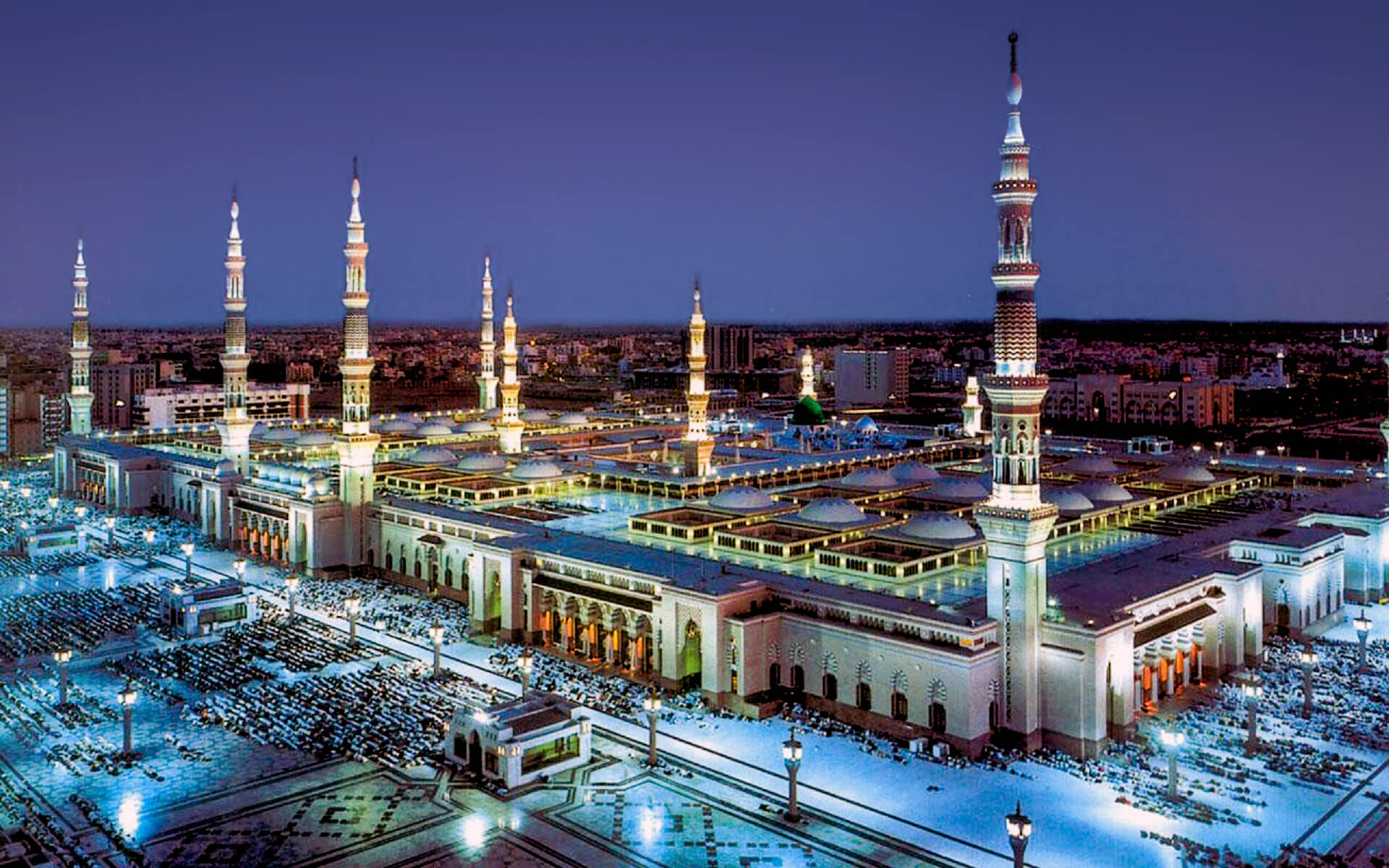 Medina, also known as Madinah, is a city in the Hejaz region of Saudi Arabia and the seat of the Al Madinah Region. The city features al-Masjid an-Nabawi (“the Prophet’s Mosque”), the Islamic prophet Muhammad’s burial site, and considered the second-holiest city in Islam after Mecca.

After Muhammad’s Hijrah from Mecca, Medina became the center of a quickly expanding Muslim Empire, first under Muhammad’s guidance, and then under the first four Rashidun caliphs, Abu Bakr, Umar, Uthman, and Ali. It served as Islam’s power basis in the first century, where the early Muslim population grew. The Quba Mosque, al-Masjid an-Nabawi, and Masjid al-Qiblatayn are the three oldest mosques in Medina (“the mosque of the two qiblas”). Muslims believe that the Quran’s chronologically last surahs were revealed to Muhammad at Medina and are referred to as Medinan surahs, as opposed to the earlier Meccan surahs.

The national government forbids non-Muslims from accessing Medina’s holy core (but not the whole city) or the city center, as it does in Mecca.

Medina is Islam’s second holiest city. Before his victorious return to Mecca, the Prophet Muhammad traveled to Medina and taught there for many years. The city is a popular stop on the Hajj journey.

The climate in Medina is hot and dry. Summers are exceptionally hot, with daytime temperatures average about 43 °C (109 °F) and nighttime temperatures averaging around 29 °C (84 °F). Temperatures of 45 °C (113 °F) or higher are not uncommon between June and September. Winters are gentler, with temperatures ranging from 12 degrees Celsius (54 degrees Fahrenheit) at night to 25 degrees Celsius (77 degrees Fahrenheit) during the day. There is extremely little rain, which mostly occurs between November and May.

The soil around Medina is primarily basalt, while the hills, notably to the south of the city, contain volcanic ash from the Paleozoic Era’s first geological epoch.

Madinah is situated in the Kingdom’s northwestern region, to the east of the Red Sea, which is just 250 kilometers (155 miles) away. Al-Hujaj, or Pilgrims’ Mountain, to the west, Salaa to the north-west, Al-E’er, or Caravan Mountain, to the south, and Uhad to the north. Madinah is located on a flat mountain plateau at the confluence of three valleys: Al-Aql, Al-Aqiq, and Al-Himdh. As a result, vast green regions may be seen in the middle of a dry mountainous environment. The city is located at an elevation of 620 meters (2034 feet) above sea level. Many volcanic rocks may be found in its western and southwestern regions. Madinah is located at the intersection of longitude 39 36′ east and latitude 24 28′ north. It has an area of around 50 square kilometers (19 square miles).

Al Madinah Al Munawwarah is a desert oasis bordered on all sides by mountains and barren terrain. It was referenced in a number of publications and references. It was known as Yatrib in ancient Maeniand writings, indicating that the demographic structure of this desert oasis is a mix of north and south Arabs who resided there and created their civilisation a thousand years before Christ.

Medina was threatened by lava flow from Harrat Rahat’s last eruption in 1256.

Medina has a long history of cultivating dates. In 1920, there were 139 types of dates cultivated in the region. Medina was also noted for raising a wide variety of vegetables.

The Medina Knowledge Economic City project, which envisions a city centered on knowledge-based sectors, is being developed and is projected to stimulate growth and employment creation in Medina.

The Prince Mohammad Bin Abdulaziz Airport, which opened in 1974, serves the city. It handles 20–25 aircraft per day on average, while this number triples during the Hajj season and school vacations.

Many hotels are being built to accommodate the growing number of pilgrims that come each year.

Slovakia, formally known as the Slovak Republic (Slovak: Slovensko or Slovenská republika; both names are legally accepted) is a landlocked nation in Central Europe....
Read more

Bordeaux is a port city in the Gironde region in southern France on the Garonne River. Bordeaux proper is a municipality (commune) with a population...
Read more

Basseterre, located on the west coast of Saint Kitts, is the capital city of the Federation of Saint Kitts and Nevis, a two-island republic. Basseterre...
Read more

Ischgl sits on the Austrian side of one of the biggest ski regions in the world. The Pardatschgratbahn, Fimbabahn, and Silvrettabahn are the three...
Read more