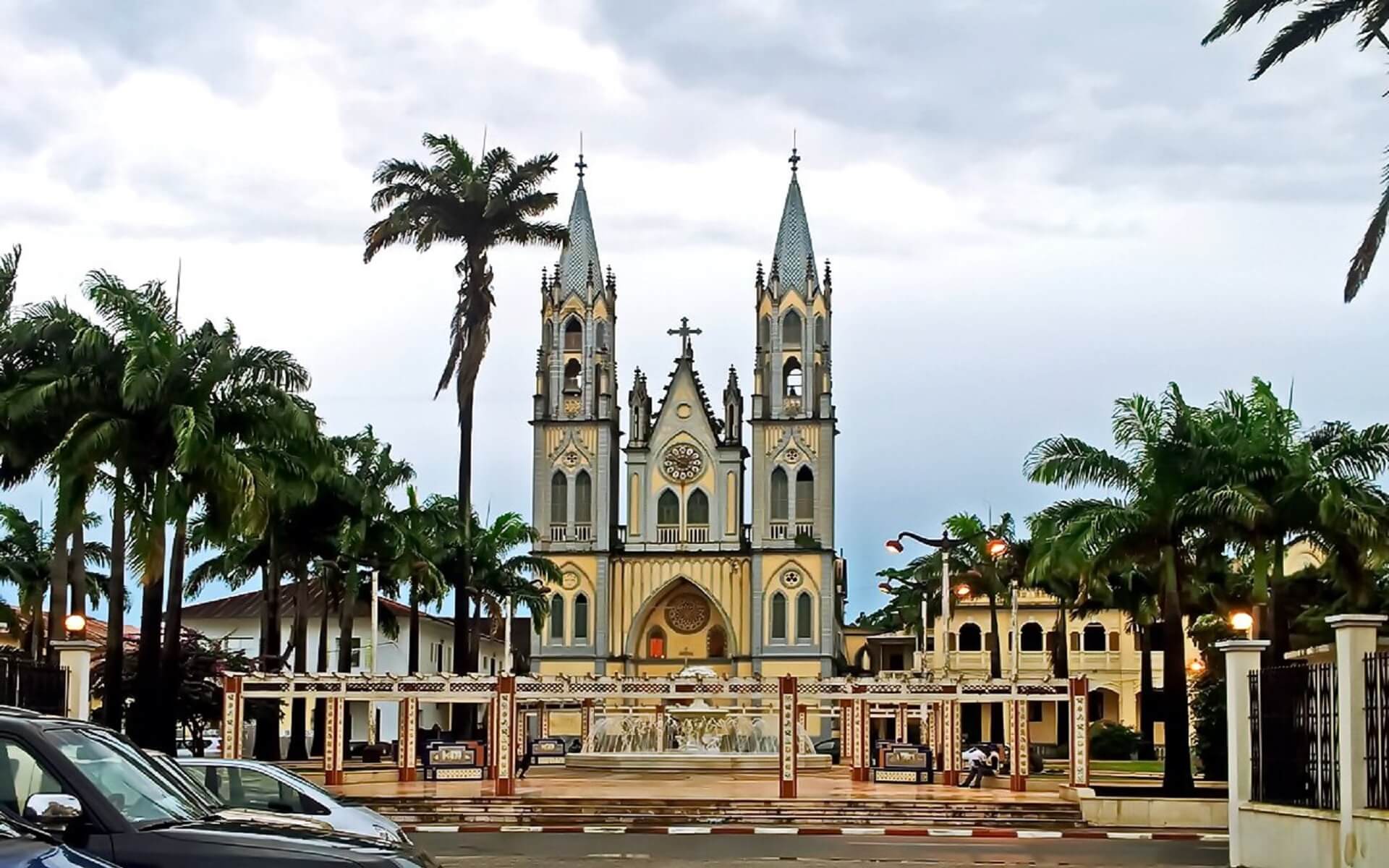 Equatorial Guinea, formally the Republic of Equatorial Guinea is a republic in Central Africa with a land area of 28,000 square kilometers (11,000 sq mi). Formerly the colony of Spanish Guinea, its post-independence name alludes to its proximity to both the Equator and the Gulf of Guinea. Equatorial Guinea is the only sovereign African country where Spanish is an official language. As of 2015, the country’s population was projected to be more than 1.2 million people.

Equatorial Guinea is divided into two parts: an island area and a mainland region. The islands of Bioko (previously Fernando Pó) in the Gulf of Guinea and Annobón, a tiny volcanic island south of the equator, make up the insular area. Bioko Island is located in northern Equatorial Guinea and is home to the country’s capital, Malabo. So Tomé and Prncipe is an island country located between Bioko and Annobón. The mainland region, Ro Muni, is bounded on the north by Cameroon and on the south and east by Gabon. It is home to Bata, Equatorial Guinea’s largest city, as well as Oyala, the country’s projected future capital. Rio Muni also has a number of tiny offshore islands, including Corisco, Elobey Grande, and Elobey Chico. The country is a member of the African Union, the Francophonie, and the CPLP.

Equatorial Guinea has been one of Sub-Saharan Africa’s biggest oil producers since the mid-1990s. It is the richest country in Africa in terms of GDP per capita, and its GDP per capita ranks 69th in the world; nevertheless, the money is unevenly distributed, and few people have benefitted from the oil wealth. According to the United Nations’ 2014 Human Development Index, the nation is ranked 144th. According to the UN, fewer than half of the world’s population has access to safe drinking water, and 20% of children die before the age of five.

The autocratic government of the nation has one of the world’s poorest human rights records, routinely placing among the “worst of the worst” in Freedom House’s annual study of political and civil rights. According to Reporters Without Borders, President Teodoro Obiang Nguema Mbasogo is a “predator” of journalistic freedom. Human trafficking is a major issue, according to the 2012 US Trafficking in Persons Report, which states that “Equatorial Guinea is a source and destination for women and children subjected to forced labor and sex trafficking.” According to the study, Equatorial Guinea is a “Tier 3” nation, which means “those whose governments do not completely comply with the basic requirements and are not making substantial attempts to do so.”

The Bantu people make up the bulk of Equatorial Guinea’s population. The Fang, the biggest ethnic group, are native to the mainland, but significant migration to Bioko Island during the twentieth century has resulted in the Fang population surpassing that of the previous Bubi people. The Fang make about 80% of the population and are divided into 67 clans. Fang-Ntumu is spoken in the north of Ro Muni, whereas Fang-Okah is spoken in the south; the two dialects vary but are mutually intelligible. Fang dialects may also be found in adjacent Cameroon (Bulu) and Gabon. While still understandable, these dialects are more different. The Bubi, who make up 15% of the population, are Bioko Island’s indigenous people. The hamlet of Niefang (the Fang’s boundary), east of Bata, served as a traditional dividing line between the Fang and the ‘Beach’ (inland) ethnic groups.

There are other coastal ethnic groups known as Ndowe or “Playeros” (Spanish for “Beach People”), including Combes, Bujebas, Balengues, and Bengas on the mainland and small islands, as well as Fernandinos, a Krio village on Bioko Island. These groups together account for 5% of the population. In addition, some Europeans (mostly of Spanish or Portuguese origin, with others with partial African ancestry) reside in the country. After independence, the majority of ethnic Spaniards fled.

Foreigners from neighboring Cameroon, Nigeria, and Gabon are increasingly flocking to the country. According to the Encyclopedia of the Stateless Nations (2002), Igbo, a southeastern Nigerian ethnic group, made about 7% of Bioko islanders. As laborers on cocoa and coffee plantations, Equatorial Guinea welcomed Asians and black Africans from other nations. Liberians, Angolans, and Mozambicans were among the black Africans who arrived. The majority of Asians are Chinese, with a minor number of Indians.

Equatorial Guinea belongs to the Organization for the Harmonization of African Business Law (OHADA). Equatorial Guinea attempted to be recognized as an Extractive Industries Transparency Initiative (EITI)–compliant nation, focusing on oil income transparency and wise use of natural resource riches. The nation was one of thirty that applied for candidate status, which it received on February 22, 2008. It was then required to fulfill a number of requirements, including committing to work with civil society and businesses on EITI implementation, appointing a senior individual to lead EITI implementation, and publishing a fully costed Work Plan with measurable targets, a timeline for implementation, and an assessment of capacity constraints. The EITI Board, however, refused to grant Equatorial Guinea’s request to extend the deadline for completing EITI certification.

Equatorial Guinea has the greatest GNI (Gross National Income) per capita of any Sub-Saharan nation, according to the World Bank. It is 83 times more than Burundi’s GNI per capita, which is the world’s poorest nation.

Equatorial Guinea is a country in western Africa. The nation is made up of five tiny islands: Bioko, Corisco, Annobón, Elobey Chico (Small Elobey), and Elobey Grande, which are all surrounded by Cameroon to the north and Gabon to the east and south (Great Elobey). Malabo, Cameroon’s capital, is approximately 40 kilometers (25 miles) off the coast of Bioko. Annobón Island is located approximately 350 kilometers (220 miles) west-southwest of Gabon’s Cape Lopez. In Corisco Bay, on the boundary between Ro Muni and Gabon, are Corisco and the two Elobey islands.

Equatorial Guinea is located between 4°N and 2°S latitudes and 5° and 12°E longitudes. Except for the insular Annobón Province, which is approximately 155 km (96 mi) south of the equator, no portion of the country’s territory is on the equator—it is in the northern hemisphere.

The climate of Equatorial Guinea is tropical, with distinct wet and dry seasons. Ro Muni is dry and Bioko is wet from June to August, and vice versa from December to February. There is a gradual shift in between. On Annobón, rain or mist falls every day, and there has never been a clear day. The temperature in Malabo, Bioko, varies from 16 °C (61 °F) to 33 °C (91 °F), but typical high temperatures in the southern Moka Plateau are around 21 °C (70 °F). The average temperature at Ro Muni is about 27 °C (81 °F). The annual rainfall ranges from 1,930 mm (76 in) in Malabo to 10,920 mm (430 in) in Ureka, Bioko, with Ro Muni being somewhat drier.

The wet lowland forests ecoregion of So Tomé, Prncipe, and Annobón include all of Annobón, as well as So Tomé and Prncipe.

Pre-independence Equatorial Guinea sold cocoa, coffee, and wood to Spain, its colonial master, as well as Germany and the United Kingdom. The nation became the first non-Francophone African member of the franc zone on January 1, 1985, when it adopted the CFA franc as its currency. The ekwele, the national currency, was formerly tied to the Spanish peseta.

The discovery and subsequent exploitation of substantial oil reserves in 1996 resulted in a significant boost in government income. Equatorial Guinea is Sub-Saharan Africa’s third-largest oil production as of 2004. It now produces 360,000 barrels per day (57,000 m3/d) of oil, up from 220,000 only two years ago.

Forestry, farming, and fishing are all significant contributors to GDP. Subsistence farming is the norm. The rural economy has deteriorated under successive harsh regimes, reducing any possibility for agriculture-led development.

Riggs Bank, a Washington-based bank into which most of Equatorial Guinea’s oil earnings were sent until recently, and which previously banked for Chile’s Augusto Pinochet, was the subject of a Senate inquiry in July 2004. In the case of Equatorial Guinea, the Senate investigation revealed that Obiang, his family, and top regime officials stole at least $35 million. The president has vehemently rejected any misconduct on his part. While Riggs Bank paid $9 million in compensation to Chile’s Augusto Pinochet in February 2005, no restitution was paid to Equatorial Guinea, as detailed in an Anti-Money Laundering Report published by Inner City Press.

By planeThere are two paved airports, one near Malabo (SSG) and the other in Bata (BAT) (BSG). Ecuato Guineana de Aviación, the country's primary airline, conducts domestic and international flights from Malabo International Airport. Other airlines that operate to Malabo airport include Iberia (from Madrid), JetAir (from London Gatwick),...

Particularly in Malabo, there are many excellent places to dine. French food is available in the Hotel Sofitel's coffee shop (placed immediately over the Cathedral on the north shore). The main restaurant of the Hotel Bahia is a popular hangout for both locals and foreigners.The Pizza Restaurant is the...

The First Hispanic-African Cultural Congress was held in June 1984 to examine Equatorial Guinea's cultural identity. The congress served as a focal point for integration and the blending of Hispanic and African cultures.TourismEquatorial Guinea presently has no UNESCO World Heritage Sites or World Heritage List candidates. UNESCO's Memory of...

Stay Safe in Equatorial GuineaTaking photographs of government assets without authorization is severely forbidden. Photographing airports, government buildings, or anything of military or strategic significance is prohibited. Foreigners snapping pictures of locals, especially children, is usually frowned upon. Since a general rule, bringing a camera with you when strolling...