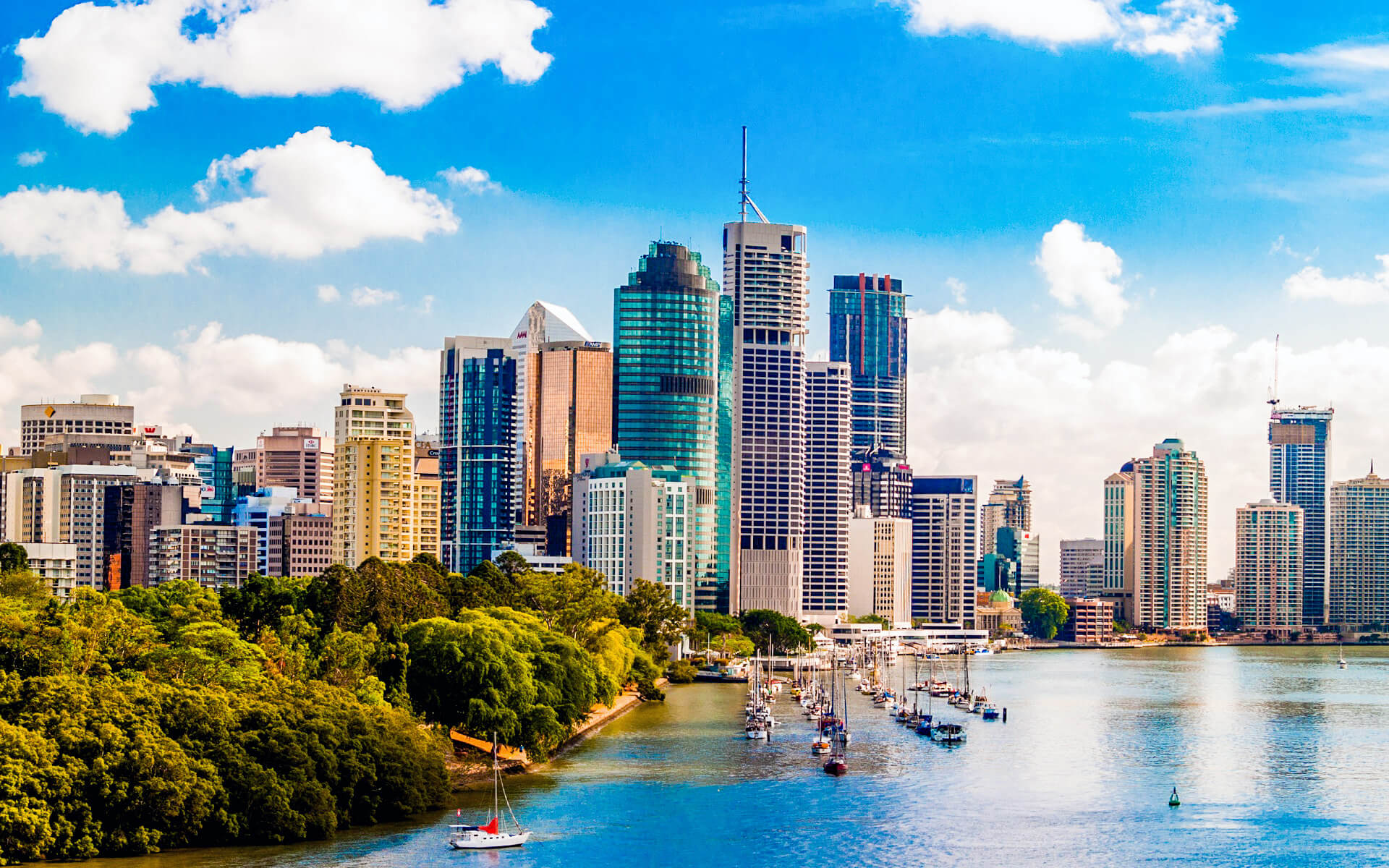 Brisbane is the capital and most populous city of the Australian state of Queensland, as well as the country’s third most populated metropolis. The metropolitan region of Brisbane has a population of 2.3 million people, while the South East Queensland urban conurbation, which includes Brisbane, has a population of more than 3.4 million people. The Brisbane core business area is located inside a bend of the Brisbane River, about 15 kilometers (9 miles) from the river’s mouth at Moreton Bay. The metropolitan area stretches in all directions along the floodplain of the Brisbane River Valley between Moreton Bay and the Great Dividing Range, encompassing several of Australia’s most populous local government areas (LGAs), most notably the City of Brisbane, which is by far the nation’s most populous LGA. Brisbanite is Brisbane’s demonym.

Brisbane, one of Australia’s oldest towns, was formed on the historic homelands of the indigenous Turrbal and Jagera peoples. The location was selected as a home for secondary criminals from the Sydney Colony and was called after the Brisbane River, which was named after Scotsman Sir Thomas Brisbane, the Governor of New South Wales from 1821 to 1825. A prison colony was established in 1824 at Redcliffe, 28 kilometers (17 miles) north of the central business area, but it was quickly abandoned and relocated to North Quay in 1825, before opening to free settlement in 1842. The Australian frontier wars between 1843 and 1855 harmed the city, while the Great Fire of Brisbane and the Great Brisbane Flood slowed expansion. When Queensland was declared a distinct colony from New South Wales in 1859, Brisbane was selected as its capital. During World War II, Brisbane played an important part in the Allied war, serving as General Douglas MacArthur’s South West Pacific headquarters.

Today, Brisbane is widely renowned for its characteristic Queenslander architecture, which accounts for a large portion of the city’s constructed history. It is also known for its devastating floods, most notably in 1974 and 2011. The city is a famous tourist destination, acting as a gateway for travelers to the state of Queensland, notably the Gold Coast and the Sunshine Coast, prominent resort cities immediately south and north of Brisbane. Brisbane has hosted a number of major cultural, international, and sports events, including the 1982 Commonwealth Games, World Expo ’88, the last Goodwill Games in 2001, and the 2014 G-20 meeting.

Brisbane is a ‘garden city,’ noted for its lush, open spaces and the comfortable pace of life that unfolds between the zigzags of its trademark river. It is large enough to be cosmopolitan yet small enough to be friendly and approachable. Brisbane’s year-round warm climate, spectacular scenery, pleasant locals, and world-class facilities drew many domestic and international visitors during the 1982 Commonwealth Games, the 1988 World Expo, the 2001 Goodwill Games, and the 2014 G20 Summit, making Brisbane Australia’s fastest-growing city. Despite its fast growth, it retains a young exuberance and boasts one of the most laid-back and forward-thinking cultures of any Australian capital city.

Tourism is important to Brisbane’s economy, since it is the third-most popular international tourist destination after Sydney and Melbourne. South Bank Parklands, Roma Street Parkland, the City Botanic Gardens, Brisbane Forest Park, and Portside Wharf are all popular tourist and leisure destinations in Brisbane. The Lone Pine Koala Refuge was the world’s first koala sanctuary, opening in 1927. Mount Coot-tha is a popular state forest, as well as the Brisbane Botanic Gardens, which include the Sir Thomas Brisbane Planetarium and the “Tsuki-yama-chisen” Japanese Garden (previously of the Japanese Government Pavilion during Brisbane’s World Expo ’88).

Brisbane has around 27 km (17 km) of bike paths, most of which ring the Brisbane river and city center and stretch west of the city. When the primary port located in the city reaches, the river was popular with bathers and allowed boating trips to Moreton Bay. Nowadays, fishing and boating are increasingly popular pastimes. The Story Bridge adventure climb and rock climbing at the Kangaroo Point Cliffs are two more popular leisure activities. Many people visit Brisbane because of the adjacent Australia Zoo, which was made famous by Steve Irwin.

In 2015, Brisbane was named one of the top ten most beautiful cities in the world by travel guidebook Rough Guides, citing factors such as “its winning combination of high-rise modern architecture, lush green spaces, and the enormous Brisbane River that snakes its way through the centre before emptying itself into the azure Moreton Bay.”

Summer humidity is considerable, and daytime temperatures regularly surpass 30°C, with nighttime temperatures seldom falling below 20°C. Heat waves may sometimes reach temperatures of above 40°C, although they are uncommon. Almost any outdoor activity in Brisbane at the height of summer will leave you drenched in sweat. Most informal activities need loose-fitting clothes that shields you from the sun, and air-conditioning will provide a pleasant night’s sleep or journey on public transportation. On hot, humid days in the summer, afternoon thunderstorms with hail and heavy rainfall are prevalent. They often pass swiftly and frequently bring on a fantastic lightning display.

Autumn (March–May) brings a chilly shift to Brisbane, with typical daytime temperatures ranging from 20 to 30°C. Most visitors who are not used to a humid environment will find this to be the finest time to visit Brisbane, as the humidity decreases and the area transitions into a more pleasant, dry, and sunny weather pattern, ideal for outdoor activities. Temperatures often drop to 10-20°C at night, with ambient heat from the day still radiating from the ground, making the early evening pleasant and comfortable, however a light jacket may be necessary later in the night.

Winter (June–August) is the region’s dry season, with cold, bright, cloudless days in Brisbane. During the day, temperatures often reach 25°C, with nighttime temperatures seldom falling below 5°C. The early-morning cold normally dissipates by mid-morning, and most of the daytime hours are reasonably pleasant; nevertheless, it is still advisable to dress warmly since this is not always the case. As sea breezes come in from the bay, the eastern suburbs tend to be colder.

Spring (September–November) sees the city revitalized by warmer days and fresh sea breezes from the bay. The weather is similar to that of the autumn months, with rising humidity as summer approaches.

Brisbane is located in Queensland’s southeast corner. The city’s core is located along the Brisbane River, while its eastern suburbs border Moreton Bay. The Brisbane metropolitan area is located on the coastal plain east of the Great Dividing Range. Brisbane’s metropolitan region stretches from Caboolture in the north to Beenleigh in the south and through to Ipswich in the south west along the Moreton Bay floodplain.

Brisbane is a mountainous city. The metropolitan area, including the central business district, is partly raised by spurs of the Herbert Taylor Range, such as Mount Coot-tha, which reaches up to 300 metres (980 ft) in elevation, and the smaller Enoggera Hill. Mount Gravatt and Toohey Mountain are two more notable Brisbane peaks. Mount Petrie, at 170 m (560 ft), and the smaller rises of Highgate Hill, Mount Ommaney, Stephens Mountain, and Whites Hill dot the cityscape. Mount Glorious (680 m) and Mount Nebo are also to the west (550 m).

The city is located on a floodplain. The city is crisscrossed by several suburban waterways, increasing the danger of floods. Since colonization, the city has seen three significant floods: in February 1893, January 1974, and January 2011. The 1974 Brisbane Flood was caused in part by “Cyclone Wanda.” Heavy rain had been falling for three weeks before to the Australia Day weekend flood (January 26–27, 1974). Many portions of the city were flooded, including the suburbs of Oxley, Bulimba, Rocklea, Coorparoo, Toowong, and New Farm. The City Botanic Gardens were swamped, resulting in the formation of a new colony of mangroves in the Brisbane River’s City Reach.

White-collar sectors include information technology, finance, higher education, and government administration, which are mostly concentrated in and around the central business district and newly constructed office districts in the inner suburbs. Blue-collar industries, including as petroleum refining, stevedoring, paper milling, metallurgy, and QR railway workshops, are concentrated on the Brisbane River’s lower reaches and in new industrial zones on the city’s outskirts. Tourism is a significant element of the Brisbane economy, both as a standalone industry and as a gateway to other parts of the state.

As part of its “Smart State” strategy, the Queensland State Government has been growing technology and scientific sectors in Queensland as a whole, and in Brisbane in particular, since the late 1990s and early 2000s. The government has funded in a number of biotechnology and research centers at Brisbane’s universities. The Institute for Molecular Bioscience at the University of Queensland (UQ) Saint Lucia Campus is a large CSIRO and Queensland state government research and innovation initiative that is now being replicated at the Queensland University of Technology (QUT) Kelvin Grove Campus with the establishment of the Institute of Health and Biomedical Innovation (IHBI).

There are a plethora of internet cafes in and around the CBD. Expect to spend between $2 and $3 per hour, however most locations will give you a discount if you pre-pay for a particular amount of hours.

The downtown area is teeming with payphones. See the page in Australia for Australia-wide contact alternatives such as mobile phones and calling cards.