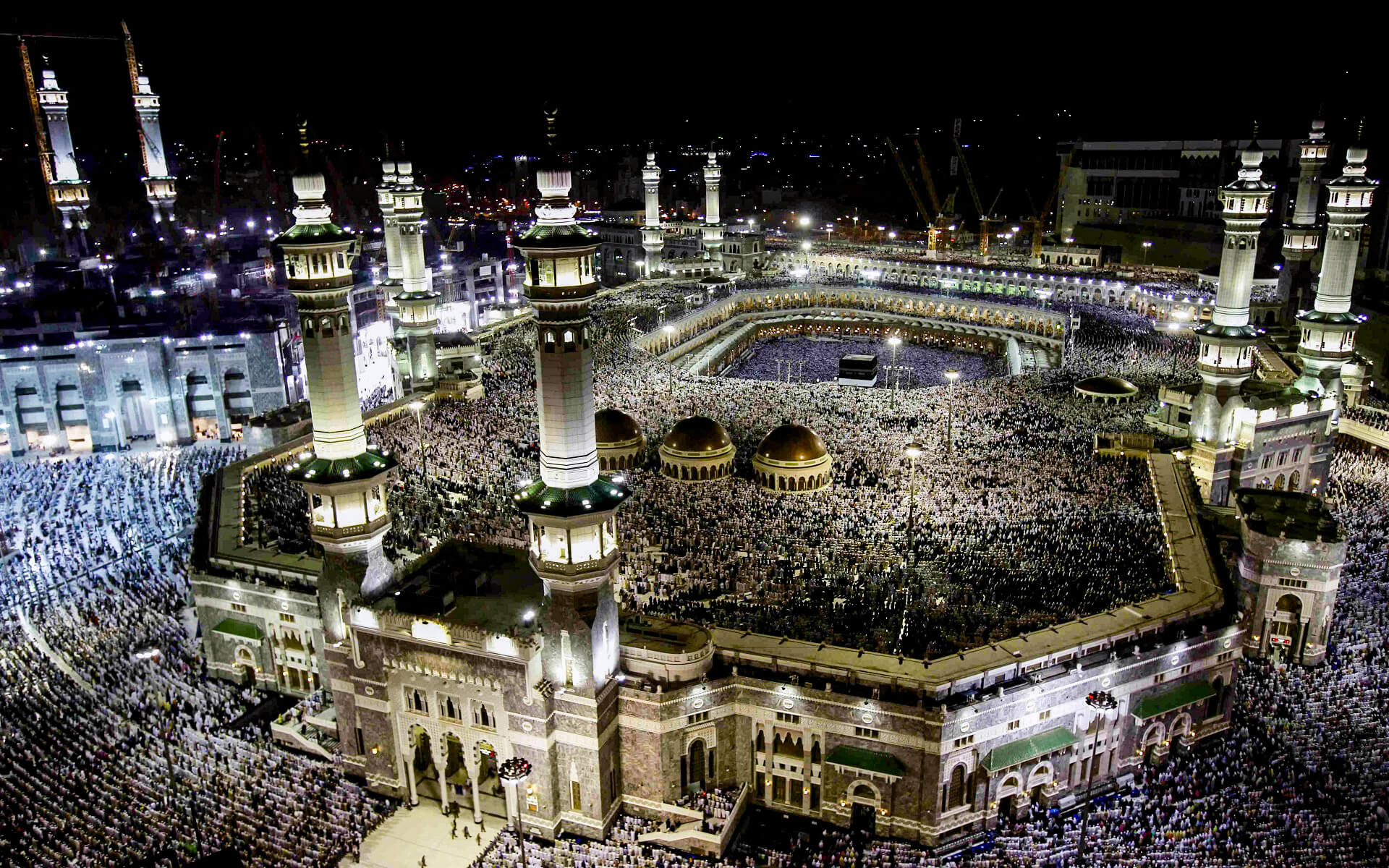 Mecca is a city in Saudi Arabia’s Hejaz region. It is the capital of the Makkah Region of that monarchy. The city sits 70 kilometers (43 miles) inland from Jeddah, in a small valley at a height of 277 meters (909 feet). Its native population was around 2 million in 2012, but tourists more than treble this figure every year during the hajj (“pilgrimage”) season, which is conducted in the twelfth Muslim lunar month of Dhu al-Hijjah.

Mecca is considered as the holiest city in Islam since it is the birthplace of Muhammad and the location of Muhammad’s first revelation of the Quran (specifically, a cave 3 km (2 mi) from Mecca), and a trip to there known as the Hajj is mandatory for all competent Muslims. Mecca is the location of the Kaaba, Islam’s holiest place, as well as the direction of Muslim prayer. The sharifs, Muhammad’s successors, governed Mecca for a long time, either as autonomous kings or as vassals to greater polities. Ibn Saud seized it in 1925.

Mecca has witnessed considerable growth in size and infrastructure in the contemporary era, with constructions such as the Abraj Al Bait, also known as the Makkah Royal Clock Tower Hotel, the world’s third tallest skyscraper and the one with the third greatest floor area. Mecca has lost several ancient buildings and archaeological monuments as a result of its growth, including the Ajyad Fortress. Today, more than 15 million Muslims visit Mecca each year, including several million during the Hajj. As a consequence, despite the fact that non-Muslims are not permitted to enter the city, Mecca has become one of the most cosmopolitan and diversified towns in the Muslim world.

Mecca, formerly a barren desert village in what is now Saudi Arabia, is now the true Mecca for Muslims. Apart from being the most important destination of pilgrimage for Muslims worldwide, it is also the cultural center of the Islamic world and a veritable melting pot of Muslims from all over the globe. Mecca, or Makkah, is Islam’s holiest city, where the Prophet Muhammad was born and nurtured, and where Muslims believe he received the first revelations of the Quran. And here is where the Kaaba is – in the heart of Islam’s most holy mosque, Masjid al-Haram, which is the direction that all Muslims worldwide face while practicing Islamic ceremonial prayer (salat). Millions of Muslims visit Masjid al-Haram, or The Grand and Sacred Mosque, throughout the year, notably during the final month of the Islamic calendar, to undertake Hajj, the pilgrimage that is an obligatory religious obligation for any Muslim who can afford it.

Mecca is located 277 meters (909 feet) above sea level, roughly 80 kilometers (50 miles) inland from the Red Sea. Central Mecca is located in a mountain corridor known as the “Hollow of Mecca.” The valleys of Al Taneem, Bakkah, and Abqar are all located in this region. This hilly setting has shaped the city’s modern growth. The city is centered around the Masjid al-Haram district, which is lower in height than the rest of the city. The ancient city is defined by the area around the mosque. To the north of the mosque, the major avenues are Al-Mudda’ah and Sq al-Layl, and to the south, As-Sg Assaghr. Where there were formerly hundreds of residences, vast roads and city squares have replaced them as the Saudis built the Grand Mosque in the city’s center. Traditional dwellings are two to three storeys tall and made of native rock. Mecca now has a total area of almost 1,200 km2 (460 sq mi).

In pre-modern Mecca, the city relied on a few major water sources. The earliest were local wells, such as the Zamzam Well, which produced brackish water in general. The second source was Ayn Zubayda’s spring. The mountains of Jabal Sad (Jabal Sa’d) and Jabal Kabkb, which are a few kilometers east of Jabal Arafa and roughly 20 kilometers (12 miles) southeast of Mecca, are the origins of this spring. Underground canals were used to transfer water from it. Rainfall was an intermittent third source that people kept in tiny reservoirs or cisterns. Even with the minimal rainfall, there remains a risk of flooding, which has been a problem from the beginning of time. According to Al-Kurd, there have been 89 historic floods by 1965, with some occurring in Saudi Arabia. The most devastating one in the recent century happened in 1942. Dams have been built since then to alleviate the situation.

The yearly pilgrimage has been vital to the Meccan economy. As one professor put it, “[Meccans] have no other way of making a livelihood except through doing hajjis.” In truth, Hajj income not only supports the Meccan economy but has traditionally had far-reaching repercussions on the Arabian Peninsula’s economy as a whole. Income was created in a variety of ways. Taxing the pilgrims was one technique. During the Great Depression, taxes were extremely high, and several of these levies remained in effect until 1972. Another source of revenue for the Hajj is pilgrim services. For example, the Saudi national airline, Saudia, derives 12% of its revenue from pilgrimage. Pilgrims’ land fare to Mecca generates revenue, as do the hotels and lodging firms that host them.

The city earns more than $100 million, while the Saudi government spends roughly $50 million on Hajj services. Although the city has various businesses and companies, Mecca no longer plays a significant part in Saudi Arabia’s economy, which is mostly focused on oil exports. Textiles, furniture, and kitchenware are among the few industries that exist in Mecca. The bulk of the economy is based on services.

The city has risen significantly in the twentieth and twenty-first centuries, as the convenience and affordability of jet travel has boosted the number of pilgrims doing the Hajj. Thousands of Saudis are engaged year-round to monitor the Hajj and operate the hotels and stores that cater to pilgrims; as a result, the demand for accommodation and services has skyrocketed. The city is now surrounded by motorways and is filled with retail malls and towers.

Christchurch is the biggest city on New Zealand’s South Island and the administrative center of the Canterbury Region. The Christchurch metropolitan area is located...
Read more

Bled is a Slovenian town located on the east side of Lake Bled. Bled is a popular Slovenian destination owing to its lovely beauty and...
Read more

Latvia, formally the Republic of Latvia, is a nation located in Northern Europe’s Baltic area. It is one of three Baltic states. It is...
Read more

Chisinau (Chișinău), also known as Kishinev, is the Republic of Moldova’s capital and biggest city. It is Moldova’s largest industrial and commercial hub, situated...
Read more

Vaduz is Liechtenstein’s capital and the location of the national parliament. The town, which is situated along the Rhine River, has a population of...
Read more

Spanish Town is the parish headquarters and major town in Jamaica’s medieval county of Middlesex. From 1534 until 1872, it served as both the...
Read more
Unusual places