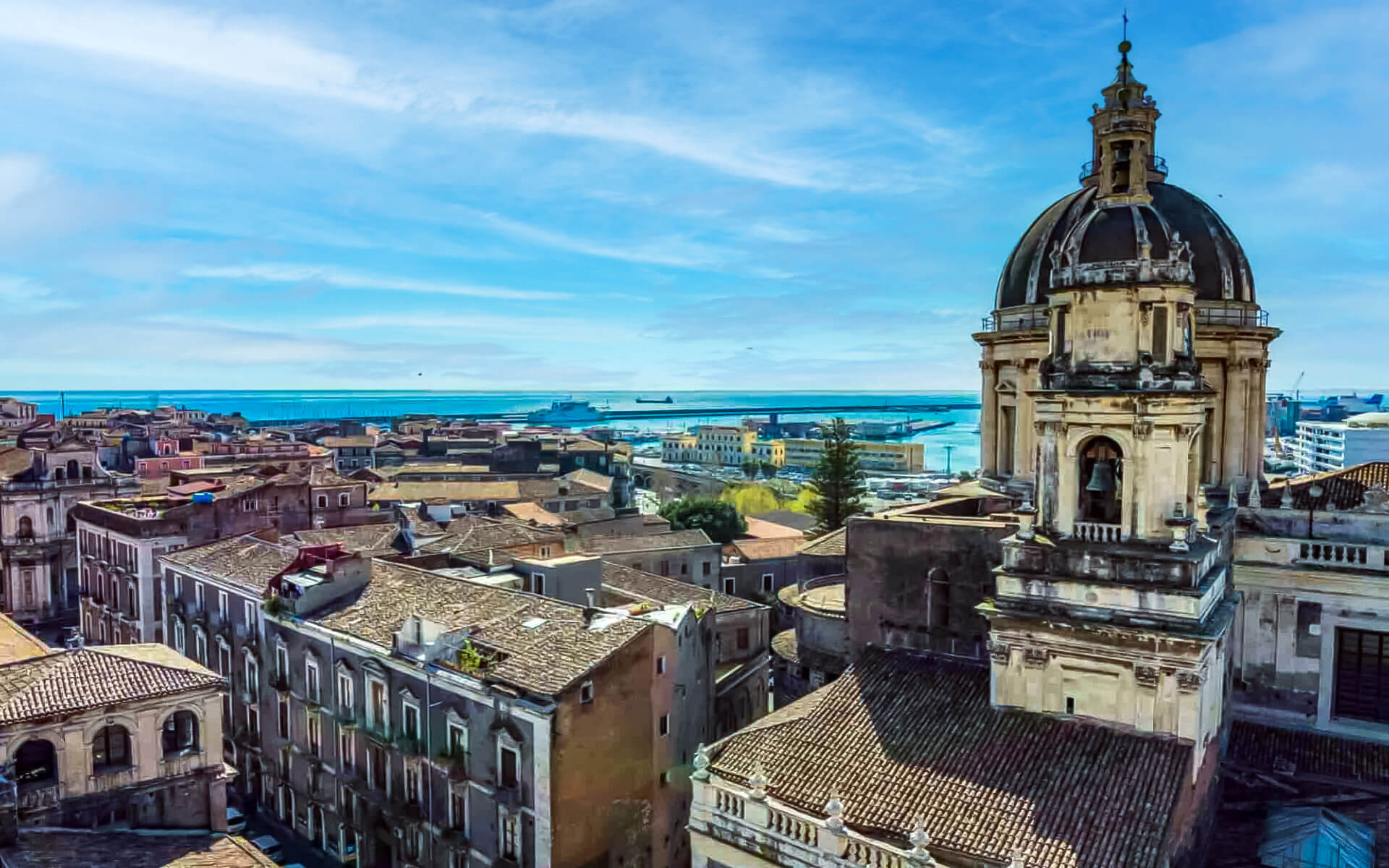 Catania is widely renowned for its historical earthquakes, having been wrecked by a devastating earthquake in 1169, another in 1693, and multiple volcanic eruptions from Mount Etna, the most intense of which occurred in 1669.

Catania, which was established in the eighth century BC, has a rich and dramatic history. In 1434, the city hosted the establishment of Sicily’s first university. Catania was one of Italy’s most prominent cultural, artistic, and political centers in the 14th and early Renaissance periods. The city boasts a rich cultural and historical heritage, with several museums, restaurants, churches, parks, and theaters. Catania is famous for its street cuisine.

Catania is a city on Sicily’s eastern coast, at the foot of Mount Etna, Europe’s largest volcano. It is the second biggest city in Sicily, with a metropolitan area of one million people, a significant transportation hub, an economic center, and a university city with a bustling downtown and a lively nightlife. Catania is particularly widely recognized for its distinctive baroque architecture and urban planning (the downtown district, together with the whole Val di Noto region, is a World Heritage Site), the result of the devastating earthquake of 1693, after which the city, like much of eastern Sicily, had to be rebuilt.

The city has a history reaching back 2700 years and has been ruled by various distinct civilizations (Greeks, Romans, Arabs, Normans, Spanish, and so on) and was a prosperous economic center, owing mostly to its port. Again, since the 1970s, the city economy has expanded as the urban area and suburbs, transforming Catania into a huge metropolitan center, primarily between the volcano and the sea. Even today, despite the presence of most of Europe’s major commercial districts (particularly Etnapolis), the ancient 17th century downtown area remains the focal point of daily life.

Catania is located under Europe’s most active volcano, which has devastated the city several times in the past. As a consequence, Catania is a city with a wide range of scenery and architecture, as well as a lot of unclean structures and abandoned residences, particularly in the highlands. However, since the city is a World Heritage Site, extensive improvements have been carried out.

Today, Catania exudes a blend of nostalgia and “joie de vivre,” particularly at night or during festivals.

The architecture, which is largely baroque, is the city’s defining characteristic. The theatricality of Baroque architecture is its defining feature. As a consequence of the reformation/counter-reformation, this style dominated Europe in the 17th century, when the statement delivered was one of grandeur. The prior style was Renaissance, and the next style was Neoclassicism. The three main characteristics are an almost excessive level of detail (statues, tons of gold, columns and pilasters, garlands and wreaths, etc.), façades that are higher than the nave (to trick the spectator of the size), and paintings that often incorporate trompe-l’il. Catania’s Baroque style is distinguished by the use of black lava stone (basalt), the Bell on the façade, and grotesque masks and putti.

This climate’s Köppen Climate Classification subtype is “Csa” (Mediterranean Climate). Summers are hot and lengthy, with the highest temperatures in all of Italy (a feature characterising nearly every months). Almost every year, 40 °C (104 °F) is reached a number of times, with record highs exceeding 45 °C (113 °F).

Winters are warm (peaks of 20 °C are not uncommon) and damp. The majority of precipitation falls from October to March, leaving late spring and summer nearly dry (in certain years, rain falls for 3–4 months). The city gets around 500 mm of rain each year, however the quantity varies greatly from year to year (wettest over 1200 mm, dryest under 250 mm).

Lows throughout the winter may sometimes fall below 0 °C (32 °F). Highs of less than 10 °C (50 °F) are also uncommon. Snowfalls are very infrequent owing to Etna’s presence; the most recent happened on 9 February 2015, although the most recent snowfall of significant significance occurred on 17 December 1988.

Catania became significantly industrialized in the late nineteenth and early twentieth centuries, with many factories and chimneys, to the point that it was dubbed “Southern Italy’s Manchester.” Catania’s economy suffered greatly from the negative impacts of World War I, and it was characterised by an economic crisis and recession that peaked in the 1920s. Since then, the city’s industrial and entrepreneurial role has declined. Catania remained a modest fishing town with dilapidated and defunct industry in the 1930s. However, after World War II’s devastation, Catania’s economy started to recover in the late 1950s and early 1960s. Indeed, the city’s economic boom was so swift and dynamic that it was dubbed the “Milan of the South,” or “Milano del Sud” in Italian. This fast economic boom caused a large number of Sicilians residing in more rural regions or smaller towns like as Enna, Ragusa, and Caltanissetta to relocate to the city in search of new employment opportunities.

Despite a number of issues, Catania now boasts one of the most active economies in Southern Italy. It retains a significant industrial and agricultural sector, as well as a brisk tourism business, with many foreign tourists flocking to see the city’s principal attractions and the adjacent Etna volcano. It houses the headquarters or key offices of corporations such as STMicroelectronics, as well as a number of chemical and pharmaceutical firms. Several new business developments have been made to help Catania’s economy, such as the construction of Etnapolis, a massive and avant-garde commercial center designed by Massimiliano Fuksas, the same architect who designed the FieraMilano industrial fair in Milan, or the Etna Valley, which houses several high-tech offices.

Catania’s tourism business is rapidly expanding. Several investments in the hotel industry have recently been undertaken by the government and private enterprises in order to make tourism a competitive sector in Catania and its region. Etnaland, a major theme park 12 kilometers (7 miles) from the city, is nearby. It is the biggest of its type in Southern Italy and draws thousands of visitors, not only from Sicily, but also from the rest of Italy.

The capital of the Kingdom of Tonga is Nukualofa. It is situated on the north coast of Tongatapu, in Tonga’s southernmost island group. Nukualofa is...
Read more

Havana is Cuba’s capital, biggest city, province, main port, and most important commercial center. The city proper has a population of 2.1 million people and...
Read more

India is a nation in South Asia. Its official name is the Republic of India. It is the seventh-largest nation in terms of land...
Read more

Seattle is a maritime city on the West Coast and the county headquarters of King County, Washington. Seattle is the biggest city in both...
Read more

Budapest is Hungary’s capital and largest city, as well as one of the largest cities in the European Union. It serves as the country’s...
Read more
Tourist destinations