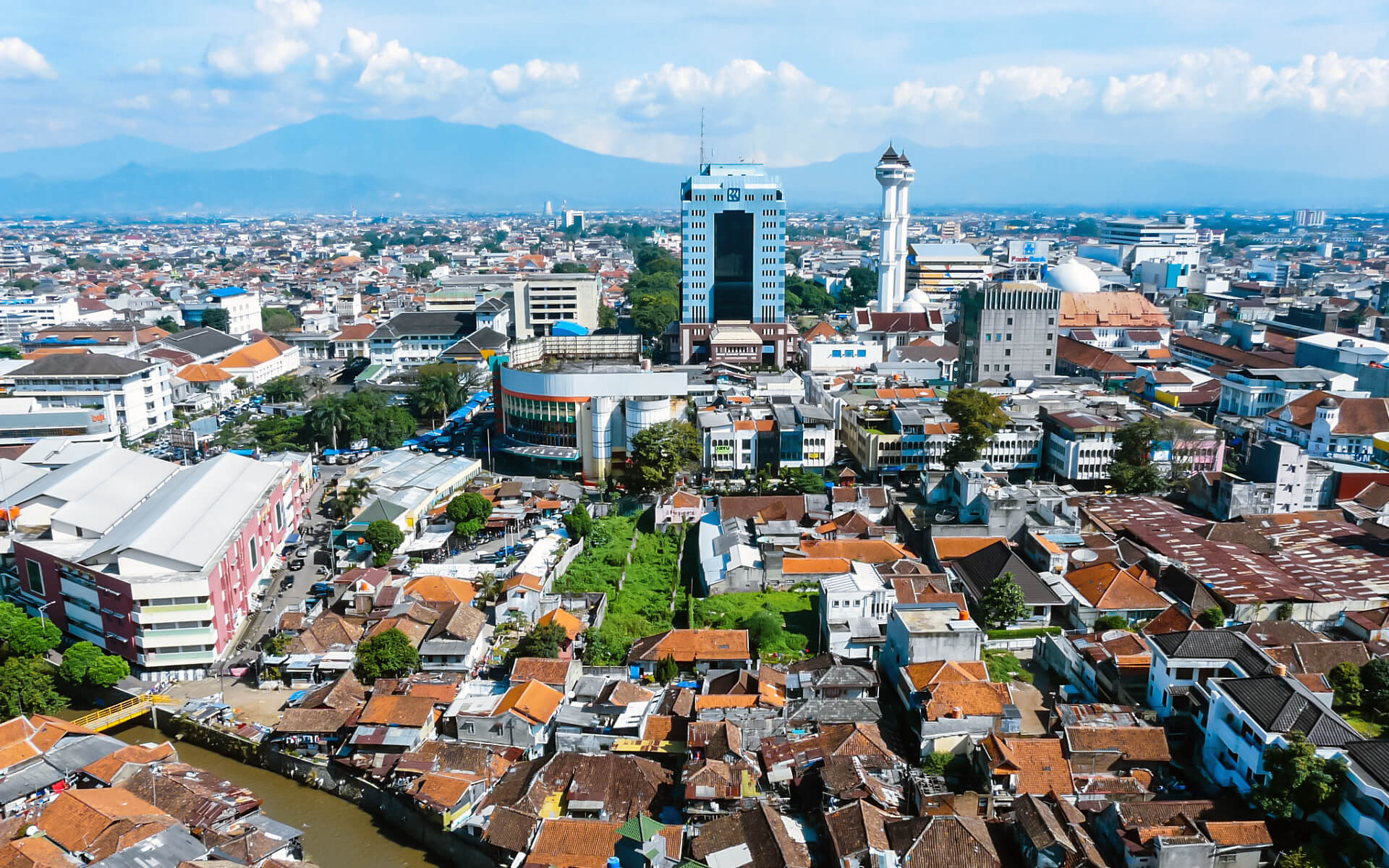 Bandung is the capital of West Java province in Indonesia and the country’s third largest city by population, with over 2.4 million people, and Greater Bandung, which consists of two municipalities and 38 districts, is the nation’s second largest metropolitan area, with 6,965,655 people according to the 2010 census. Bandung, located 768 metres (2,520 feet) above sea level and roughly 140 kilometers (87 miles) south east of Jakarta, offers lower temperatures all year. The city is built on a river valley that is surrounded by volcanic mountains. This geography offers an excellent natural defensive system, which was the key motivation for the Dutch East Indies government’s decision to relocate the colonial capital from Batavia to Bandung.

In the eighteenth century, Dutch colonials created tea plantations surrounding the highlands, and a road was built to link the plantation region to the colonial capital Batavia (180 kilometers (112 miles) to the northwest). Bandung’s Dutch residents advocated the foundation of a municipality (gemeente), which was granted in 1906, and the city rapidly grew into a vacation city for plantation owners. Luxurious hotels, restaurants, cafés, and European shops sprung up, earning the city the moniker Parijs van Java (Dutch: “The Paris of Java”).

Following Indonesia’s independence in 1945, the city saw tremendous expansion and urbanization, converting Bandung from an idyllic village to a congested 16,500 persons/km2 (per square kilometer) metropolitan region with a population of over 2.5 million people. Natural resources have been heavily exploited, particularly through the conversion of protected upland areas into highland villas and real estate, and, despite many issues (ranging from waste disposal and floods to a complicated traffic system and a lack of road infrastructure), Bandung continues to attract a large number of tourists, weekend sightseers, and migrants from other parts of Indonesia.

Bandung is a favorite weekend getaway for Jakarta locals. Some of the city’s attractions include the milder environment of the highland plantation region, the variety of cuisine, the cheaper fashion stores housed in factory outlets and distros, golf courses, and the zoo. Bandung is also a famous shopping destination, particularly for Malaysian and Singaporean visitors, owing to its low-cost textile and fashion items.

The Tangkuban Prahu volcanic crater to the north, the spectacular Kawah Putih volcano lake, and Patenggang Lake, a lake surrounded by tea plantations approximately 50 kilometers (31 miles) to the south of the city, are all popular tourist attractions near Bandung.

Visitors to the Bongkor protected forest area (kawasan hutan lindung), Saung Daweung, and Arcamanik, as well as the slopes of West Manglayang Mountain in an area known as Caringin Tilu, with entry from Padasuka and Cicaheum to the north, can get a clear view of the Bandung Basin in its mountain surroundings. The forest is situated 1,500 feet above sea level, is covered with pine trees, and is administered by the government firm Perhutani. It is a 30-minute drive from downtown. Taman Hutan Raya Ir. H. Djuanda is also located to the north of the city. Bukit Moko, a tourist attraction known for its vistas and a steel monument of a gigantic star known as Puncak Bintang, is also located in the Cicaheum region. Tourists should visit the Geological Museum of Bandung, the Indonesia Postal Museum, the Sri Baduga Museum, and the Asian-African Conference Museum in Bandung.

Bandung’s climate is tropical highland rainforest monsoon. Because of its height, Bandung has a colder climate than other Indonesian cities and is classed as humid; the average temperature is 23.6 °C (74.5 °F) all year. The average annual rainfall in the city varies from 1,000 millimetres in the centre and southeast to 3,500 mm in the north. The wet season is similar to that of other Indonesian areas, lasting from November to April. During the dry season, the weather is often humid, sunny, and cloudy. During the rainy season, it rains virtually every day, with just a few days of partially bright weather in between and a lot of cloud cover.

Bandung, the seat of West Java province, is situated approximately 180 kilometers (110 miles) southeast of Jakarta and is Indonesia’s third biggest city. It is 768 meters (2,520 feet) above sea level and surrounded by Late Tertiary and Quaternary volcanic terrain up to 2,400 meters (7,874 feet) high. The 400 km2 flat of central Bandung plain is located in the midst of the Bandung Basin, which spans 2,340.88 km2 and includes Bandung, the Cimahi city, part of Bandung Regency, part of West Bandung Regency, and part of Sumedang Regency. The Citarum is the basin’s primary river; one of its branches, the Cikapundung, splits Bandung from north to south before merging with the Citarum again near Dayeuhkolot. The Bandung Basin is a vital supply of water for potable water, agriculture, and fisheries, with its 6,147 million m3 of groundwater serving as a municipal reservoir.

The northern half of Bandung is hillier than the rest of the city, and the distinctive truncated flat-peak form of the Tangkuban Perahuvolcano (Tangkuban Perahu literally means “upside-down boat”) may be viewed from there. Long-term volcanic activity in the north has developed rich andisol soil appropriate for intense rice, fruit, tea, tobacco, and coffee crops. Alluvial soils deposited by the Cikapundung river prevail in the south and east.

The Bandung Basin is situated on an old volcano known as Mount Sunda, which erupted up to 3,000–4,000 metres (9,850–13,100 ft) during the Pleistocene epoch. Two large-scale eruptions occurred; the first produced the basin, while the second (about 55,000 years ago) blocked the Citarum river, transforming the basin into “the Great Prehistoric Lake of Bandung.” The lake drained away for causes that are still being debated among geologists.

Bandung is home to almost 50 higher education institutions and is a major educational destination in Indonesia. Dago, a once-quiet residential neighbourhood, has evolved into a major business and entertainment hub, with trendy cafés and restaurants along Dago Street. Cihampelas Street became a popular clothes retail location in the early 1990s and continues to be so to this day.