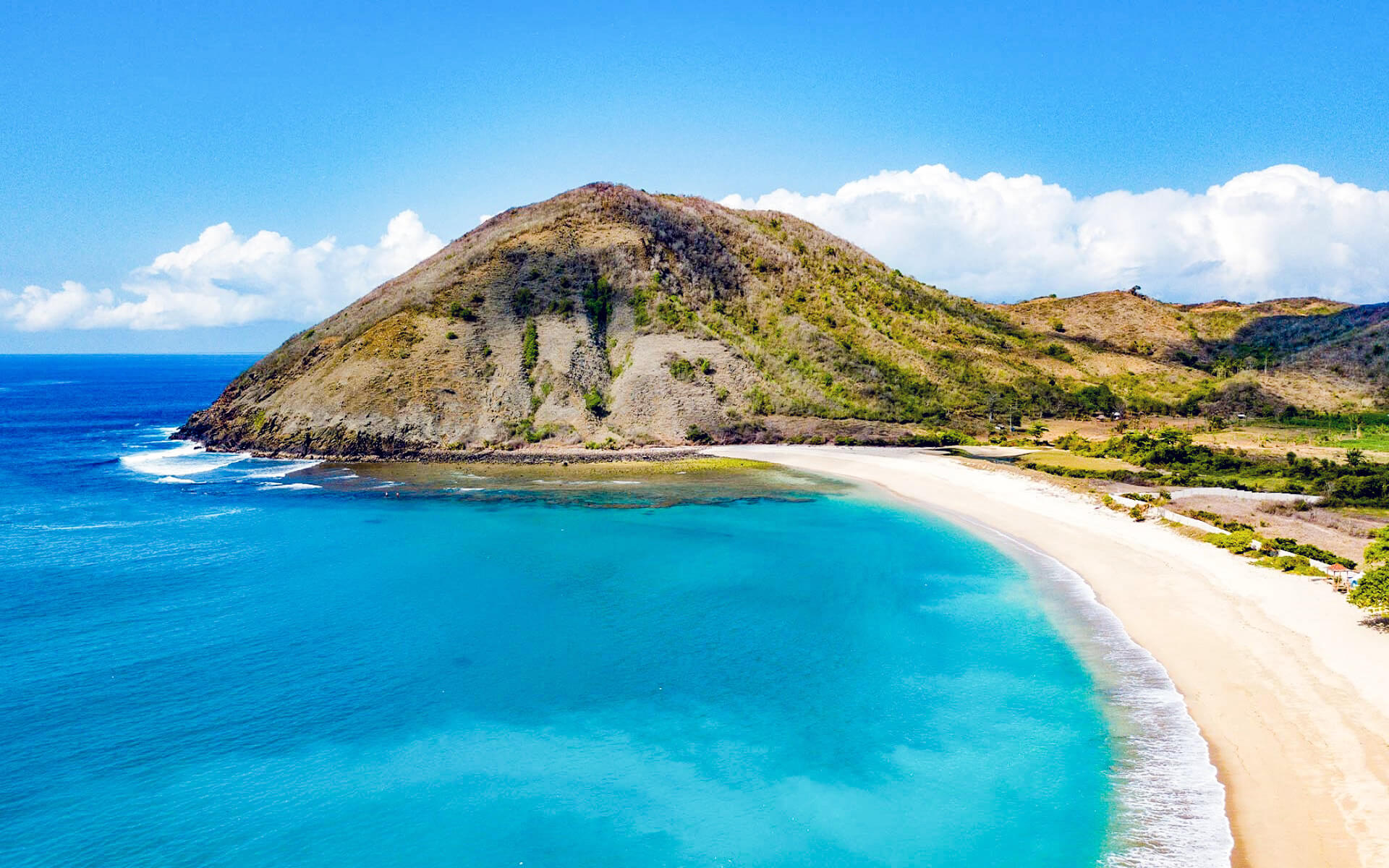 Lombok is an island in Indonesia’s West Nusa Tenggara region. It is part of the Lesser Sunda Islands series, with the Lombok Strait dividing it from Bali to the west and the Alas Strait separating it from Sumbawa to the east. It is essentially round, with a “tail” (Sekotong Peninsula) to the southwest, is about 70 kilometers wide, and has a total area of about 4,514 kilometers2 (1,825 sq mi). Mataram is the island’s provincial capital and main city. It is around the same size and population as neighboring Bali, and it shares some cultural legacy, although it is officially part of Nusa Tenggara Barat, along with sparsely populated Sumbawa. It is bordered by a number of tiny islands known as Gili in the local language.

Tourism is a significant source of revenue on Lombok. The island’s most developed tourist region is on the island’s west coast, centered on the settlement of Senggigi. The most developed tourist amenities are in the township’s near surroundings. The west coast beach tourist strip stretches for 30 kilometers along the coastline road north of Mataram and the former airport at Ampenan. The main tourist region stretches to Tanjung in the northwest, at the foot of Mount Rinjani, and includes the Sire and Medana Peninsulas, as well as the famous Gili Islands just offshore. These three tiny islands are most usually reached by boat from Bangsal near Pemenang, Teluk Nare to the south, or Senggigi and Mangsit beach to the south. Many hotels and resorts provide rooms ranging from low-cost to opulent. Recently, direct speed boat services from Bali have been operating, providing a direct link to the Gili islands. Despite their quickly changing nature, the Gili Islands continue to provide both a laid-back backpacker’s getaway and a high-end resort destination.

Kuta is also known for its stunning, mostly empty white sand beaches. Since the building of Praya’s international airport, the little town has grown significantly. Surfers from all over the world are flocking here in search of beautiful waves and the laidback and rustic vibe of Lombok. South Lombok surfing is regarded as among the greatest in the world. From late March to September or later, large polar lows sweep up into the Indian Ocean, driving long-range, high-period swell from as far south as Heard Island. This coincides with the dry season and the South-East trade winds, which blow as if on cue. Lombok is well-known for its variety of breaks, including the world-famous Desert Point at Banko Banko in the island’s southwest.

The northern west coast at Tanjung includes several new luxury hotel and villa projects centered on the Sire and Medana peninsulars, which are close to the Gili islands, as well as a new boating port at Medana bay. These new buildings will complement the current 5 star resorts and a huge golf course.

While tropical, hot, and humid, Lombok is dryer than neighboring Bali, making it an especially appealing alternative during the rainy season, which runs from October to April (it rains on Lombok too, but rarely for more than an hour or two). The prime tourist season, however, is from May through August.

The Lombok Strait is located to the west of the island and marks the passage of the biogeographical divide between the prolific fauna of the Indomalayan ecozone and the distinctly different, but equally prolific fauna of Australasia—this distinction is known as the “Wallace Line” (or “Wallace’s Line”) and is named after Alfred Russel Wallace. Wallace was the first to make a remark on the separation of the two areas, as well as the abrupt border between the two biomes.

The Alas Strait, a thin body of water to the east of Lombok, separates the island of Lombok from the neighbouring island of Sumbawa.

The centrally positioned stratovolcanoMount Rinjani, Indonesia’s second tallest volcano, rises to 3,726 m and dominates the island’s landscape (12,224 ft). Rinjani’s most recent eruption occurred in May 2010 near Gunung Barujari. Ash was reported to be rising two kilometers into the sky from Rinjani’s caldera lake of Segara Anak’s Barujari cone. Lava spilled into the caldera lake, boosting its temperature, while ash fall devastated farms on Rinjani’s slopes. The Gunung Rinjani National Park, which was formed in 1997, protects the volcano and its crater lake, ‘Segara Anak’ (child of the sea). According to recent evidence, an old volcano, Mount Samalas, of which only a caldera remains, was the site of one of the biggest volcanic eruptions in recorded history, producing global climatic shifts.

Lombok’s highlands are primarily forested and underdeveloped. The lowlands are densely populated. Rice, soybeans, coffee, tobacco, cotton, cinnamon, cacao, cloves, cassava, maize, coconuts, copra, bananas, and vanilla are the main crops farmed on the island’s lush soils. The southern half of the island is rich yet arid, particularly along the shore.

Lombok’s water supply is strained, putting a burden on both the water supply of the provincial capital, Mataram, and the island as a whole. The southern and central regions are said to be the most severely hit. The province of West Nusa Tenggara in general is facing a water problem as a result of rising forest and water table erosion and degradation. It is estimated that 160 thousand hectares out of a total of 1960 thousand hectares were damaged. Forest West Nusa Tenggara’s Head of Built Environment and Security Forest Service On Wednesday, May 6, 2009, Andi Pramari declared in Mataram that, “If this problem is not solved, it is possible that residents in this section of NTB may find it difficult to receive water within the next five years (West Nusa Tenggara). Not only that, but agricultural output in terms of value added will decline, and inhabitants will face water scarcity in their wells “.. This situation is exacerbated by a high rate of wood theft in the NTB area.

In September 2010, several people in Central Lombok were reported to have walked for several hours to obtain a single pail of water. Nieleando, a little beach community approximately 50 kilometers from Mataram, has been plagued by dry wells for years. It has been stated that the situation periodically develops to the point that disagreements and violence amongst villages occur. The most severe difficulties have been observed in the districts of Jonggat, Janapria, Praya Timur, Praya Barat, Praya Barat Daya, and Pujut. Provincial officials labeled all six districts drought zones in 2010. Sumbawa, the province’s second principal island, also suffered severe drought in 2010, making it a province-wide problem.

Many tourists to Lombok, as well as most of the island’s merchandise, go across the Lombok Strait by ship or plane from Bali. The distance between the two islands is just 40 kilometers (25 miles). Lombok is sometimes advertised as “unspoiled Bali” or “Bali’s sister island.” Currently, with the help of the central government, Lombok and Sumbawa are being developed as Indonesia’s second international and local tourist destinations. Lombok has maintained a more natural, uncrowded, and undeveloped atmosphere, attracting visitors who come to appreciate the island’s relaxing pace and the chance to explore the island’s untouched, outstanding natural beauty. The most recent marketing strategies for Lombok/Sumbawa strive to distinguish themselves from Bali by promoting the island of Lombok as a stand-alone destination. The inauguration of the Lombok International Airport on October 1, 2011, aided this effort.

By First World standards, Nusa Tenggara Barat and Lombok may be considered economically impoverished, with a huge majority of the inhabitants living in poverty. Nonetheless, the island is rich, has enough rainfall in most parts for agriculture, and has a diversity of temperate zones. As a result, food in plenty and diversity is affordably accessible at local farmer’s markets, while communities continue to suffer from starvation owing to drought and subsistence farming. Rice, veggies, and fruit may be purchased for as low as $0.50 for a family of four. Even if a family’s income from fishing or farming is as low as US$1.00 a day, many families are able to live a happy and productive life on such little means. However, rising food and gasoline costs are putting a strain on the people of Lombok. For many of the island’s indigenous people, access to housing, education, and health care remains a challenge.