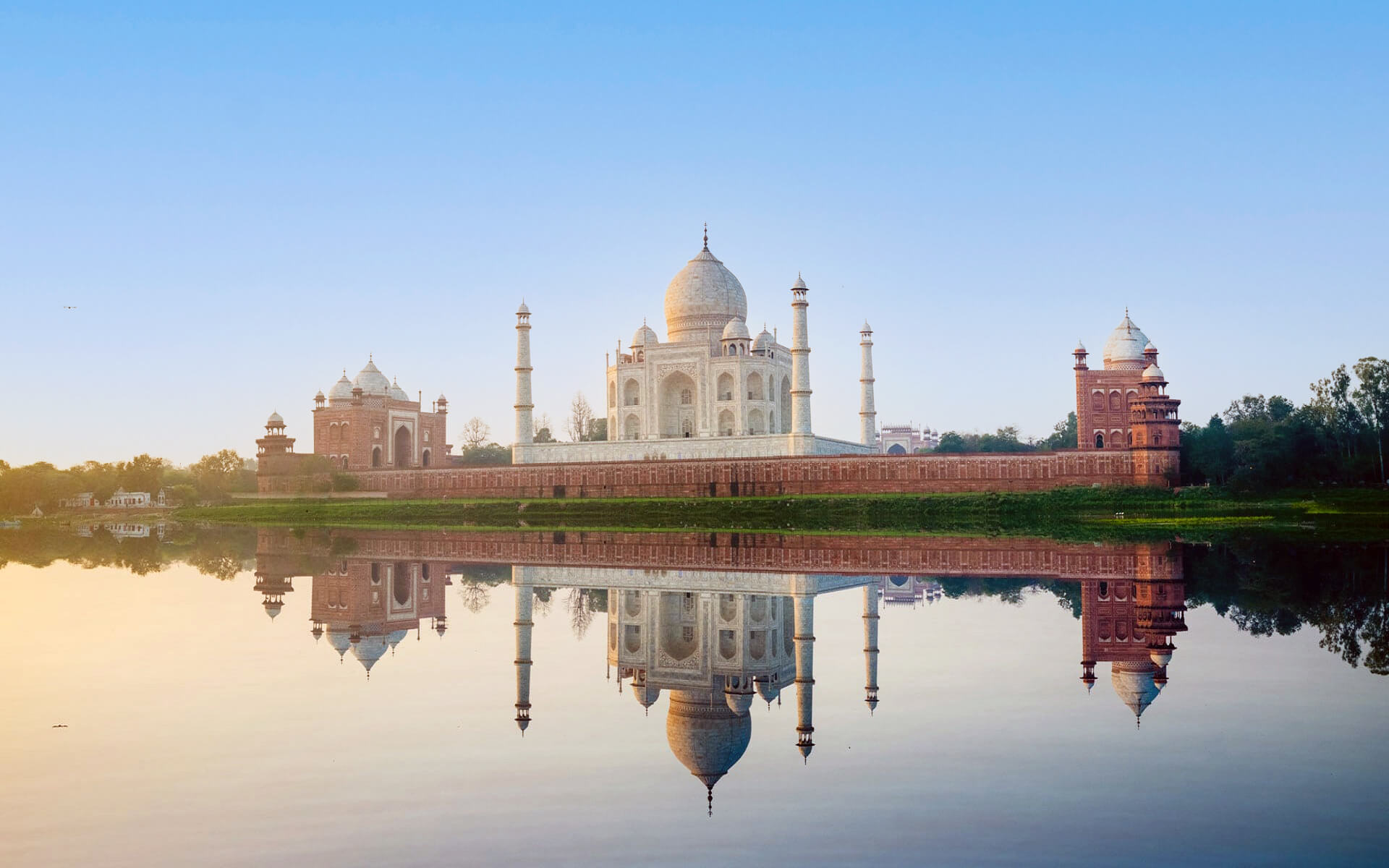 Agra is a city in the northern Indian state of Uttar Pradesh, located on the banks of the Yamuna River. It lies 378 kilometers (235 miles) west of Lucknow, 206 kilometers (128 miles) south of New Delhi, and 125 kilometers (78 miles) north of Gwalior. It is one of the most populated cities in Uttar Pradesh, and the 19th most populous city in India, with a population of 1,686,993 (as of 2013). Agra may also refer to the administrative district headquartered in Agra. It is a popular tourist destination because to its numerous magnificent Mughal-era structures, most notably the Taj Mahal, Agra Fort, and Fatehpr Sikr, all of which are UNESCO World Heritage Sites. Agra, along with Delhi and Jaipur, is part of the Golden Triangle tourism circuit and is part of the Braj cultural zone.

The city was originally mentioned in the epic Mahbhrata, where it was named Agrevaa (derived from Sanskrit, which means “forest frontier”). According to legend, the city was founded by Raja Badal Singh, a Sikarwar Rajput monarch (about 1475), whose fort, Badalgarh, was on or near the current fort. However, the 11th century Persian poet Mas’d Sa’d Salmn describes Sultan Mahmud of Ghazni’s desperate attack on the stronghold of Agra, which was then held by Shh King Jayapala. It was first documented in 1080 AD, when a Ghaznavide army seized it. In 1506 Sultan Sikandar Lod (1488–1517) was the first to relocate his capital from Delhi to Agra. He ruled the kingdom from here, and Agra rose to prominence as the country’s second capital. He died in 1517, and his son, Ibrhm Lod, stayed in power for nine more years, constructing various mansions, wells, and a mosque in the fort during his reign. Finally defeated in 1526 in the Battle of Panipat. Afghans governed the region between 1540 and 1556, starting with Sher Shah Suri. From 1556 until 1658, it was the capital of the Mughal Empire.

Agra is the Taj Mahal’s home city in the north Indian state of Uttar Pradesh, some 200 kilometers from Delhi.

Aside from these three attractions, the city has nothing more to offer. Pollution, particularly pollution and trash, is widespread, and visitors are bombarded by swarms of touts and hawkers at every monument, with the exception of the interior Taj Mahal, which is free of frauds and touts once inside. Having said that, the landmarks are among of the world’s marvels, and no vacation to India is complete without at least one visit to the Taj Mahal. A single day in Agra is more than enough for the great majority of tourists.

Agra has a semiarid climate that borders on humid subtropical. Winters in the city are pleasant, summers are hot and dry, and there is a monsoon season. However, the monsoons in Agra, although significant, are not as heavy as the monsoons in other regions of India. This is a major reason why Agra has a semiarid climate rather than a humid subtropical one.

It boasts a tourist sector as well as royal crafts like as Pietra Dura, marble inlay, and carpets due to the presence of the Taj Mahal and other historic landmarks.

Today, agriculture employs 40% of the population, while the leather and footwear industries and iron foundries employ the other 40%. In 2007, Agra was the second most self-employed city in India, behind only Varanasi, and was followed by Bhopal, Indore, and Patna. According to the National Sample Survey Organization, 431 of every 1,000 employed men in the city were self-employed in 1999–2000, rising to 603 per 1,000 in 2004–05. Agra’s economy benefits from tourism. Kaya Kalp – The Royal Spa, located in the Hotel Mughal in Agra, is Asia’s biggest spa.

Agra boasts a plethora of industry. Harihar Biotech, Uttar Pradesh’s first plant biotech enterprise, is situated near the Taj. There are around 7,000 small industrial enterprises. Agra is also well-known for its leather items; the oldest and most well-known leather business, Taj Leather World, is located in Sadar Bazaar. Carpets, handicrafts, zari and zardozi (embroidery work), marble and stone carving and inlay work are all popular items. Agra is well-known for its sweets (Petha and Gajak) and snacks (Dalmoth), as well as its textile producers and exporters and car sector. Carpet production was brought to the city by Moghul Emperor Babur, and it has prospered since since.

Agra is located 200 kilometers southeast of Delhi and is one of the destinations in the Golden Triangle of Agra-Delhi-Jaipur. Agra is also well-connected by train and road to other neighboring towns and tourist locations, making it an ideal day excursion from Delhi or a stop on a longer...

Tongas, electric buses, and electric tempos are commonly available and are the most convenient method to reach the Taj, which is not accessible by automobile. There are auto-rickshaws and cycle-rickshaws around; remember to agree on fares in advance. If you are a foreigner, please certain that you bargain aggressively...

The exquisite Taj Mahal and Agra Fort are by far Agra's top two attractions. When arranging your trip, bear in mind the complex entrance fee system: the Taj Mahal, Agra Fort, Itmud-ad-Daulah, Sikandra, and Fatehpur Sikri all need payment of a 500 charge to the Agra Development Authority in...

Adlabs Multiplex. The Interactive Theatre, the world's first interactive theater, provides each spectator with a wireless remote device equipped with push buttons and a tiny LCD screen that enables them to play in a trivia game based on the film's topic. The show is called India in Motion, and it...

Petha, a sort of very sweet candy, and Dal Moth, a spicy lentil combination, are Agra specialties. Both of these items are also popular as souvenirs. Chaat - Agra is a Chaat lover's paradise. Chaat comes in a variety of varieties, but one thing they all have in common is...

Numerous stores in Agra offer stone objects, ranging from jewelry to tiny boxes and plaques with inlay work reminiscent of the Taj Mahal. The greatest of them are magnificent, yet even the most mundane are rather lovely. Additionally, Agra is well-known for its leather items. Consider spending some time...

A bottle of Indian beer costs between 70 and 100 rupees at a hotel, although Agra has no nightlife other from cultural acts at some of the bigger hotels and restaurants. Once you've left the streets of Agra and checked into your hotel, you're unlikely to return. Amar Vilas Bar, Taj...

Don't leave any cash or valuables in your hotel room. Check all hotel, restaurant, and lounge bills for mistakes. Never pay anybody in advance for anything, especially taxi drivers. Pickpockets should be avoided. If you do decide to buy anything, keep in mind that most things are cheap knockoffs of originals...