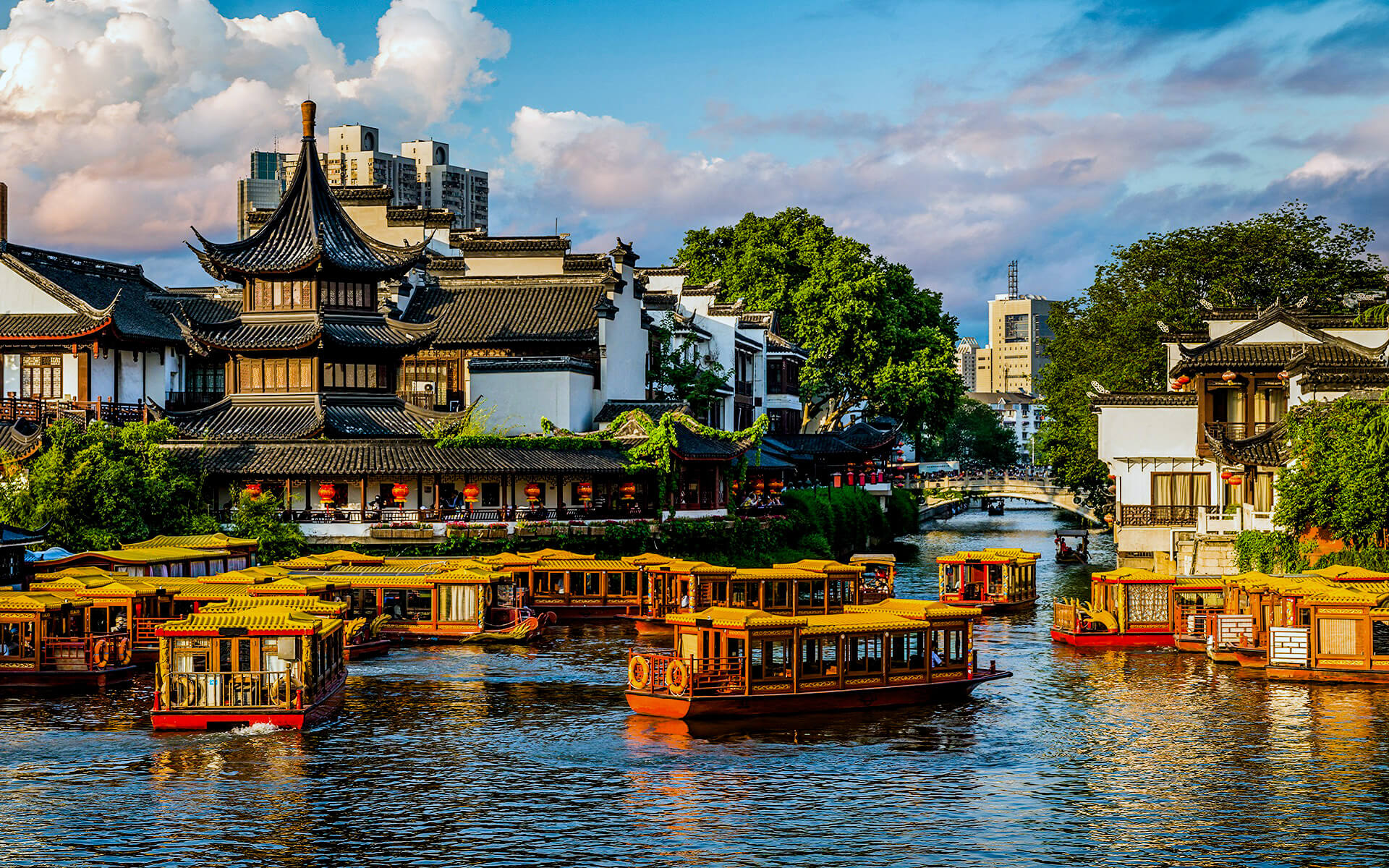 With a population of 8,230,000, Nanjing is the capital of Jiangsu Province in the People’s Republic of China and the second biggest city in the east China area. It has long been a significant center of culture, education, science, politics, economics, transportation networks, and tourism, and it constitutionally remains the capital of the Republic of China, which lost the mainland during the civil war.

From the third century AD through 1949, the city played an important role in Chinese history and culture, serving as the capital of successive Chinese dynasties, kingdoms, and republican administrations. Prior to the introduction of pinyin romanization, the city name of Nanjing was spelt Nanking or Nankin. Nanjing had many previous names, and some of them are currently used as district names in the city, such as Jiangning, whose former character Jiang (, River) is the former portion of the name Jiangsu and later character Ning (, simplified version, Peace) is the short name of Nanjing. When referring to the capital of a state, such as the ROC, Jing is used as an abbreviation for Nanjing. Although Nanjing was chosen as the Chinese national capital as early as the Jin dynasty, the name Nanjing was given to the city around a thousand years later, in the Ming dynasty. Nanjing is also known as Jinling or Ginling (, meaning “Gold Mountain”), a name that has been used since the Warring States Period of the Zhou Dynasty.

Nanjing, located in the Yangtze River Delta in the heart of east China, is home to one of the world’s major inland ports. Nanjing is also one of the fifteen sub-provincial cities in the administrative framework of the People’s Republic of China, with jurisdictional and economic autonomy comparable to that of a province. Nanjing was placed seventh in the National Statistics Bureau’s study of “Cities with Strongest Comprehensive Strength,” and second in the Yangtze River Delta’s evaluation of cities with the most sustainable growth potential. It has also received the 2008 Chinese Habitat Scroll of Honour, the Special UN Habitat Scroll of Honour Award, and the National Civilized City designation. Nanjing has several high-quality universities and research centers, with the city placing third in terms of the number of universities included in the 100 National Key Universities, including Nanjing University. The ratio of college students to total population is the highest in the country among metropolitan cities. According to Nature Index, Nanjing is one of the top three Chinese research cities.

Nanjing, one of the nation’s most significant cities for over a thousand years, is acknowledged as one of China’s Four Great Ancient Capitals, and had been the world’s biggest city aggregately for hundreds of years, enjoying peace and prosperity as well as bearing wars and tragedies.

After the establishment of the People’s Republic of China, it served as the capital city of Jiangsu province, and it is now the titular capital of the Republic of China, housing several of its key cultural buildings, including the Presidential Palace and the Sun Yat-sen Mausoleum. Fuzimiao, Ming Palace, Chaotian Palace, Porcelain Tower, Drum Tower, Stone City, City Wall, Qinhuai River, Xuanwu Lake, and Purple Mountain are some of Nanjing’s most notable human historical landscapes, mountains, and rivers. Nanjing Library, Nanjing Museum, and Art Museum are among the city’s most important cultural institutions.

Nanjing is one of the most attractive cities on the Chinese mainland, with lush green parks, natural beauty lakes, tiny mountains, historical buildings and monuments, relics, and much more that draw millions of visitors each year.

The city pass may be purchased for 100 at the entrance to any of the city’s major parks, such as the zoo or Yuhuatai Memorial Park, and offers free admission to 21 different destinations. For each pass, you must give a passport picture, and they are good for one calendar year.

Nanjing has a humid subtropical climate influenced by the East Asian monsoon. The four seasons are distinct, with moist conditions present throughout the year, especially hot and humid summers, chilly, damp winters, and decent lengths of spring and fall in between. Nanjing, along with Chongqing and Wuhan, is known as one of the “Three Furnacelike Cities” along the Yangtze River due to its consistently high summer temperatures.

Nanjing, with a total land area of 6,598 square kilometers (2,548 square miles), is located in the center of the drainage basin of the lower parts of the Yangtze River, as well as in the Yangtze River Delta, one of China’s main economic zones. The Yangtze River runs through Nanjing City’s west and then north sides, while the Ningzheng Ridge surrounds the city’s north, east, and south sides. The city is located 300 kilometers (190 miles) west of Shanghai, 1,200 kilometers (750 miles) south of Beijing, and 1,400 kilometers (870 miles) east of Chongqing. The downstream Yangtze River runs from Jiujiang, Jiangxi, through Anhui and Jiangsu to the East Sea. The drainage basins of the downstream Yangtze are the Huai River basin to the north and the Zhe River basin to the south, and they are linked by the Grand Canal east to Nanjing. The area surrounding Nanjing is known as the Hsiajiang (Downstream River) region, with Jianghuai emphasizing the northern portion and Jiangzhe emphasizing the southern half. Dongnan ( South East, Southeast) and Jiangnan (River South, south of Yangtze) are other names for the region.

Nanjing is located at the confluence of the Yangtze River, an east-west water transport artery, and the Nanjing–Beijing railway, a south-north land transport artery, hence the nickname “door of the east and west, throat of the south and north.” Furthermore, the west portion of the Ningzhen range lies in Nanjing; the Loong-like Zhong Mountain curls in the east of the city, and the tiger-like Stone Mountain crouchs in the west, hence the names “the Zhong Mountain, a dragon curling, and the Stone Mountain, a tiger crouching.” In the “Constructive Scheme for Our Country,” Mr. Sun Yet-sen praised Nanjing, saying, “The situation of Nanjing is magnificent since mountains, lakes, and plains are all incorporated in it.” It’s difficult to locate another city like this.”

Because of its favorable geographical position and accessible transportation, Nanjing has been an industrial hub for textiles and minting since the Three Kingdoms era. During the Ming dynasty, Nanjing’s industry flourished, and the city rose to become one of the most opulent in China and the globe. It was the busiest commercial city in East Asia and led in textiles, minting, printing, shipbuilding, and many other sectors. Textiles thrived, notably during the Qing era; the sector employed over 200 thousand people, and there were approximately 50 thousand satin machines in the city in the 18th and 19th centuries.

When the foundation of the ROC in the first part of the twentieth century, Nanjing steadily transitioned from being a manufacturing center to being a heavy consumption metropolis, owing to the fast increase of its rich people after Nanjing reclaimed China’s political limelight. A slew of massive department shops, such as Zhongyang Shangchang, sprung up, luring merchants from all over China to market their wares in Nanjing. In 1933, the city’s food and entertainment industries earned more money than the industrial and agricultural industries combined. One-third of the city’s workforce was employed in the service sector.

In the 1950s, when the CPC formed the People’s Republic of China, the government invested extensively in the city to create a series of state-owned heavy enterprises as part of the national strategy of fast industrialization, transforming it into an east China heavy industry production hub. Overzealous in its pursuit of a “world-class” industrial metropolis, the government made several terrible blunders during construction, such as spending hundreds of millions of yuan to dig for non-existent coal, resulting in negative economic growth in the late 1960s. From the 1960s through the 1980s, there were Five Pillar Industries: electronics, automobiles, petrochemicals, iron and steel, and power, all of which had large state-owned enterprises. Following the Reform and Opening recovering market economy, state-owned enterprises found themselves incapable of competing with efficient multinational firms and local private firms, and thus were either mired in heavy debt or forced into bankruptcy or privatization, resulting in a large number of layoff workers who were technically not unemployed but effectively jobless.

The city’s present economy is essentially a fresh development built on the past. Service sectors dominate, contributing for over 60% of the city’s GDP, with the financial, cultural, and tourist industries accounting for the top three. Information technology, energy conservation and environmental protection, new energy, smart power grids, and intelligent equipment manufacture have all emerged as core businesses. Suning Commerce, Yurun, Sanpower, Fuzhong,Hiteker, 5stars, Jinpu, Tiandi, CTTQ Pharmaceutical, and Simcere Pharmaceutical are among the largest private companies. Panda Electronics, Yangzi Petrochemical, Jinling Petrochemical, Nanjing Chemical, Nanjing Steel, Jincheng Motors, Jinling Pharmaceutical, Chenguang, and NARI are all large state-owned enterprises. Multinational corporations such as Siemens, Ericsson, Volkswagen, Iveco, A.O. Smith, and Sharp have established lines in the city, while a number of multinationals such as Ford, IBM,Lucent, Samsung, and SAP have opened research centers there. Many top Chinese companies, including Huawei, ZTE, and Lenovo, maintain important R&D centers in the city. Nanjing is a center for industrial technology research and development, with several R&D facilities and institutes, particularly in the fields of electronics technology, information technology, computer software, biotechnology and pharmaceutical technology, and novel material technology.

Nanjing’s economy, trade, industry, and city building have all grown in recent years. The city’s GDP was RMB 801 billion in 2013, ranking third in Jiangsu, and GDP per capita (current price) was RMB 98,174 (US$16041), an 11 percent rise from 2012. The average disposable income of an urban person was RMB 36,200, while the average net income of a rural resident was RMB 14,513. The urban unemployment rate was 3.02 percent, which was lower than the national average (4.3 percent). Nanjing’s GDP rated 12th in China in 2013, while its overall competency ranked 6th on the mainland and 8th including Taiwan and Hong Kong in 2009.