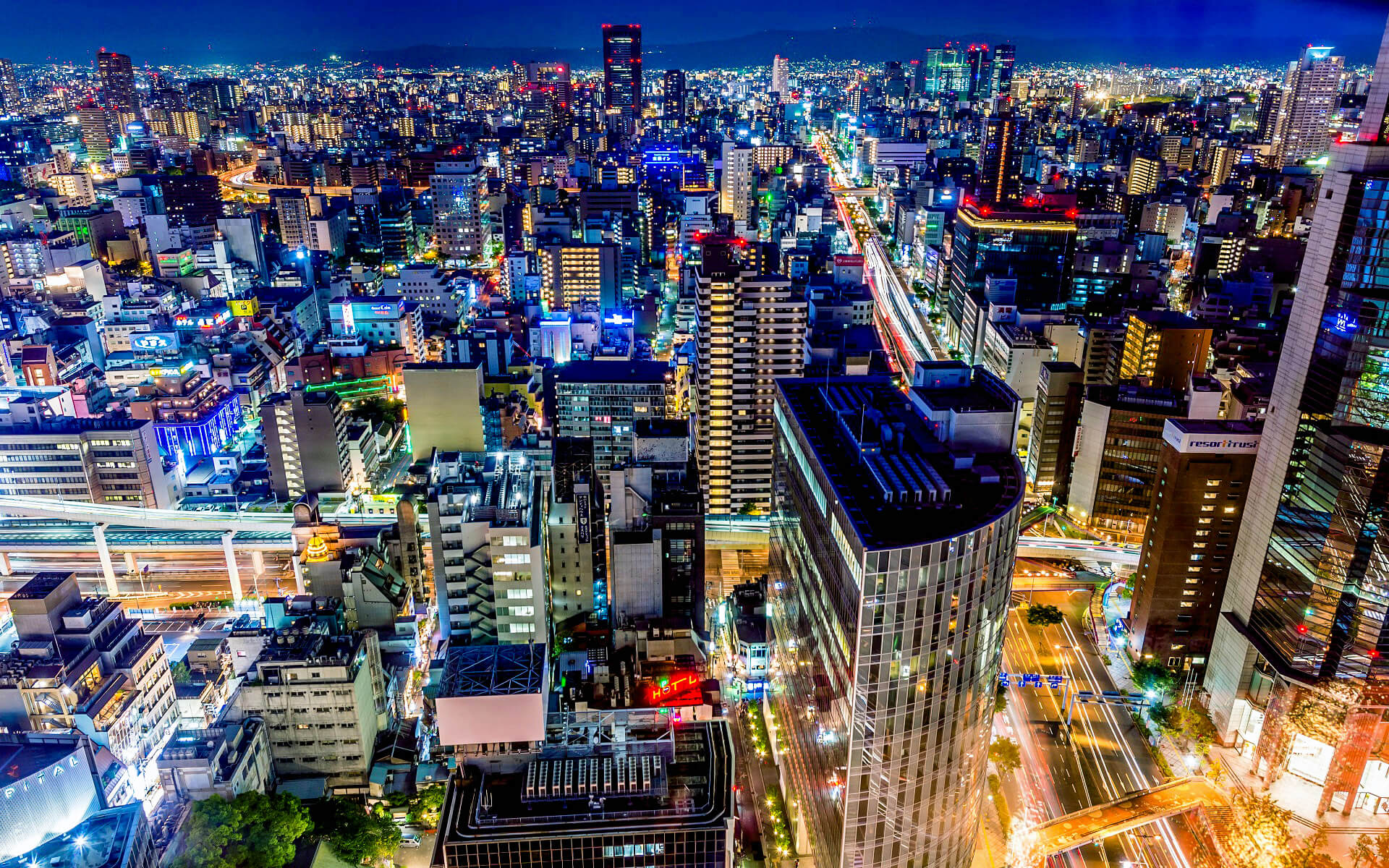 Osaka is a designated city in Japan’s Kansai region. It is the capital city of Osaka Prefecture and the major component of the Keihanshin Metropolitan Area, Japan’s second largest and one of the world’s largest, with over 19 million residents. Osaka, located at the mouth of the Yodo River on Osaka Bay, is Japan’s second biggest city by day after Tokyo’s 23 wards and the third largest city by night after Tokyo’s 23 wards and Yokohama, acting as a key economic centre for the nation.

Historically a mercantile city, Osaka was also known as the “nation’s kitchen” and functioned as a rice trading hub throughout the Edo era.

TEMPLES, SHRINES, AND OTHER HISTORICAL SITES

Osaka has four distinct seasons and is situated in the humid subtropical climatic zone. Its winters are relatively warm, with the coldest month, January, having an average high of 9.3 °C (49 °F). During the winter, the city seldom receives snowfall. Spring in Osaka begins mildly but quickly becomes hot and humid. It is also Osaka’s wettest season, with the tsuyu (rainy season) lasting from late May to early July. The summers are quite hot and humid. The average daily maximum temperature in July and August exceeds 35 °C (95 °F), with average overnight temperatures hovering around 25 °C (77 °F). In Osaka, autumn has a cooling tendency, with the early part of the season resembling summer and the later portion of the season resembling winter.

The city’s west side is open to Osaka Bay, and it is otherwise totally encircled by more than ten satellite cities, all of which are in Osaka Prefecture except for Amagasaki, which is in Hygo Prefecture to the northwest. The city has a bigger land area (about 13 percent) than any other city or hamlet in Osaka Prefecture. When the city was founded in 1889, it occupied roughly the area known today as the Chuo and Nishi wards, only 15.27 square kilometers (3,773 acres), which would eventually grow to today’s 222.30 square kilometers (54,932 acres) through incremental expansions, the largest of which was a single 126.01 square kilometers (31,138 acres) expansion in 1925. The highest point in Osaka is 37.5 metres (123.0 ft) Tokyo Peil in Tsurumi-ku, while the lowest point is 2.2 metres (7.2 ft) Tokyo Peil in Nishiyodogawa-ku.

Osaka’s gross city product in fiscal year 2004 was 21.3 trillion, a 1.2 percent rise over the previous year. This statistic accounts for around 55% of total production in Osaka Prefecture and 26.5 percent in the Kinki area. In 2004, the three biggest industries were commerce, services, and manufacturing, accounting for 30%, 26%, and 11% of the total, respectively. The city’s per capita income was around 3.3 million, 10% greater than that of the Osaka Prefecture. According to MasterCard Worldwide, Osaka is ranked 19th among the world’s major cities and plays an essential role in the global economy.

The greater Osaka area’s GDP (Osaka and Kobe combined) is $341 billion. Osaka, like Paris and London, has one of the world’s most productive hinterlands.

Historically, Osaka was the hub of Japanese trade, particularly in the middle and pre-modern centuries. Nomura Securities, Japan’s first brokerage business, was formed in the city in 1925, and Osaka is now home to a major futures market. Many large corporations have now relocated their headquarters to Tokyo. However, some significant corporations, like Panasonic, Sharp, and Sanyo, continue to be based in Osaka. The city has launched an initiative to attract local and international investment, led by mayor Junichi Seki.

According to the worldwide consulting company Mercer, Osaka was the second most costly city in the world for expatriate workers in 2009. It rose nine positions from 11th place in 2008 to eighth place in 2007. However, it did not rank among the top 10 on the list in 2013. In its 2013 Cost of Living research, the Economist Intelligence Unit (EIU) named Osaka as the world’s second most expensive city.