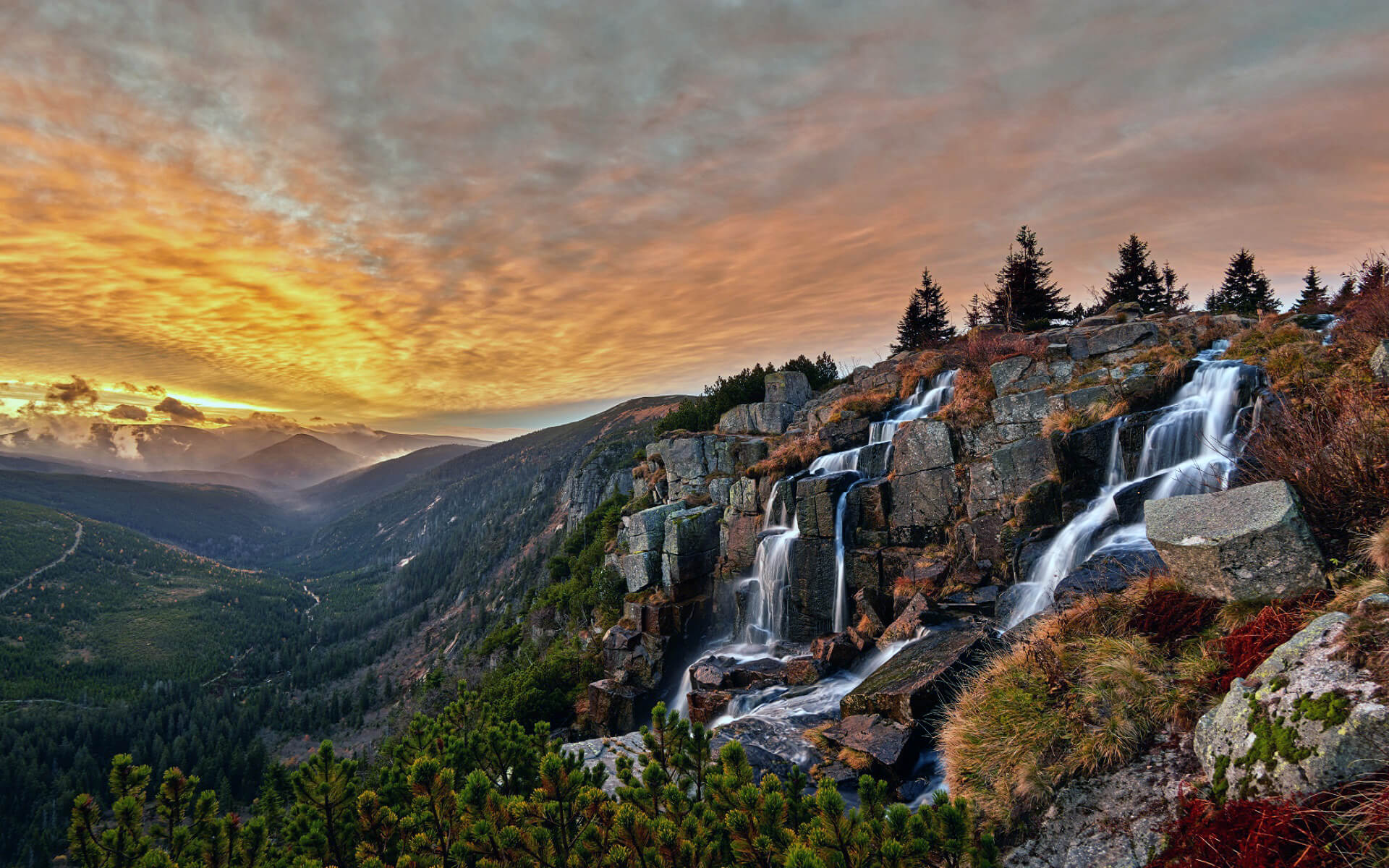 The tallest and most visited mountain range in the Czech Republic is the Krkonoše Mountains (the Giant Mountains). They run along the border with Poland and link with the Jizerské Mountains in the west. They are 38 kilometers long and 25 kilometers wide at its widest point. The Snka Mountain is the highest point in Krkonoe and, by extension, the Czech Republic. The Krkonoše Mountains provide year-round appealing and active recreational opportunities. It is, of course, downhill and cross-country skiing in the winter.

The tallest peak, known as “Snowhead,” is situated right on the Polish-Czech border. It is the tallest peak in the Czech Republic, standing at 1,602 meters. On the Polish side, there is a restaurant and a church. The summit is accessible through a contemporary gondola from the Czech side or an older chairlift from the Polish side. Hiking paths to the top approach are also available from both sides of the mountain. The Elbe River begins at the border and runs from the Czech Republic (Bohemia) all the way through Germany to Hamburg. It is one of the longest rivers in Central Europe.

In the summer, they provide great conditions for trekking, and those who are more athletic may ride their bikes across the mountains, taking use of the well-functioning cycle buses. The complex network of hiking routes will guide tourists to the most beautiful and appealing areas in the Krkonoše Mountains. Examples include the Mumlava waterfall at Harrachov, the Labská dam under the Pindlerv Mln resort, the Elbe River springs, the viewing towers tpánka, al, and erná Hora, and several museums.

Krkonoše offers a range of recreational activities in addition to skiing and hiking. The bobsleigh track or rope climbing facility available in Harrachov, Pindlerv Mln, and Pec pod Snkou will pump up your excitement. Paragliding, snowmobiling, snow tubing, mountain scooters, and quads are additional options. Bowling, golf, tennis, and a range of other classic and non-traditional sports are available.

Conservation of the environment

Large sections of the mountain range are preserved as national parks and nature reserves on both the Czech and Polish sides.

The Czech Krkonoše National Park (Krkonosk národn park, KRNAP) was established in 1963 as the second national park in Czechoslovakia, making it the Czech Republic’s oldest national park. It covers an area of around 370 square kilometers (140 square miles), and includes not just the subalpine zone but also extensive areas down to the foot of the mountains.

The Karkonosze National Park (Karkonoski Park Narodowy, KPN) in Poland was established in 1959 and encompasses an area of 55.8 square kilometers (21.5 square miles). It includes the very sensitive upper portions of the mountain range from around 900 to 1,000 meters (3,000 to 3,300 feet) in elevation, as well as certain protected nature reserves below this zone.

The Polish national park’s rigorous conservation standards forbid replanting of damaged or dead woodlands. Large-scale reforestation operations, on the other hand, are prevalent on the Czech side.

The climate of the Krkonoše is characterized by frequent weather fluctuations. Winters are harsh, and snow depths of more than 3 metres (9.8 feet) are not unusual. For five or six months, many portions of the Alps are covered with snow. At higher elevations, thick fog is common. Mount Snka/nieka is at least partially obscured in fog and/or clouds on 296 days out of the year, and has an average temperature of roughly 0.2 °C, which is comparable to regions far further north, such as Iceland. The main ridge is one of Europe’s most wind-exposed locations. The Foehn wind is a common weather occurrence on the northern side. The yearly precipitation varies from 700 millimetres (28 inches) at the mountains’ base to 1,230 millimetres (48 inches) atop Mount Snka/nieka. The snow pits in the lowlands at the foot of the main ridge get the most precipitation, with 1,512 mm (59.5 in).