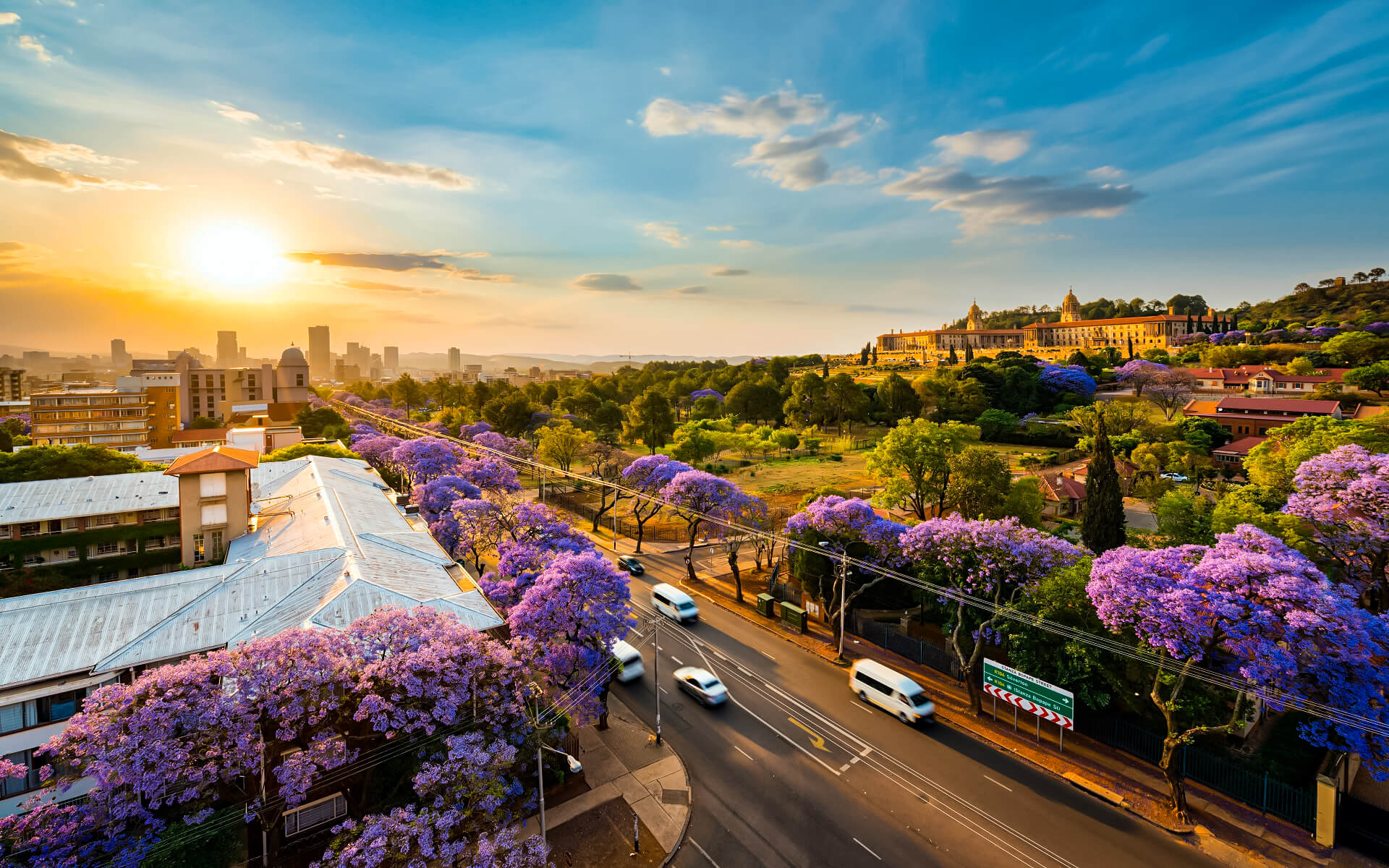 Pretoria is a city in South Africa’s Gauteng Province, in the northern section of the country. It serves as the seat of the executive arm of government and is one of the country’s three capital cities. (The legislative capital is Cape Town, while the judicial capital is Bloemfontein.)

Pretoria is renowned as the Jacaranda City in South Africa because of the hundreds of Jacaranda trees planted in its streets, parks, and gardens. It was named after the Voortrekker commander Andries Pretorius.

Pretoria has had a wide range of cultural influences throughout the years, which is reflected in the architectural styles seen across the city. It includes architectural styles ranging from 19th century Dutch, German, and British colonial architecture through contemporary, postmodern, neomodern, and art deco architecture, as well as a healthy mix of particularly South African designs.

The Pretoria National Botanical Garden and the National Zoological Gardens of South Africa are both located in Pretoria. The Austin Roberts Bird Sanctuary, Pretorius Square gardens, the Pretoria Rosarium, Church Square, Pretoria Showgrounds, Springbok Park, Freedom Park, and Burgers Park, the city’s oldest park and now a national monument, are just a few of the city’s smaller parks and gardens.

Pretoria has an impressive collection of public art. Pretoria, a dynamic and changing city, has a thriving art scene with a broad spectrum of works ranging from sculptures to murals to works by globally and locally known artists. A large collection of native artworks may be seen in the Pretoria Art Museum.

The climate of the city is humid subtropical, with long hot wet summers and brief chilly to cold, dry winters.

Winters in the city are typical of South African winters, with chilly, clear nights and mild to fairly warm days.

Although the average low temperatures throughout the winter are modest, the bright sky may make it very cold, with nocturnal low temperatures in previous years ranging from 2 to -5 degrees Celsius.

The average annual temperature is 18.7 degrees Celsius (65.7 degrees Fahrenheit). This is very high, given the city’s comparatively high altitude of about 1339 meters, and is owing mostly to the city’s protected valley location, which works as a heat trap and keeps it shut off from cool southerly and south-easterly air masses for much of the year.

The rainy season is focused in the summer, with drought conditions dominating in the winter, when frosts may be severe. Snowfall is an exceptionally unusual occurrence in the city; snowflakes were seen in 1959, 1968, and 2012, but the city has never seen an accumulation.

Pretoria is located in the northeast of South Africa, about 55 kilometers (34 miles) north-northeast of Johannesburg, in a transitional area between the Highveld plateau to the south and the lower-lying Bushveld to the north. It is located at an elevation of around 1,339 meters (4,393 feet) above sea level in a pleasant, protected, productive valley surrounded by the Magaliesberg range’s peaks.