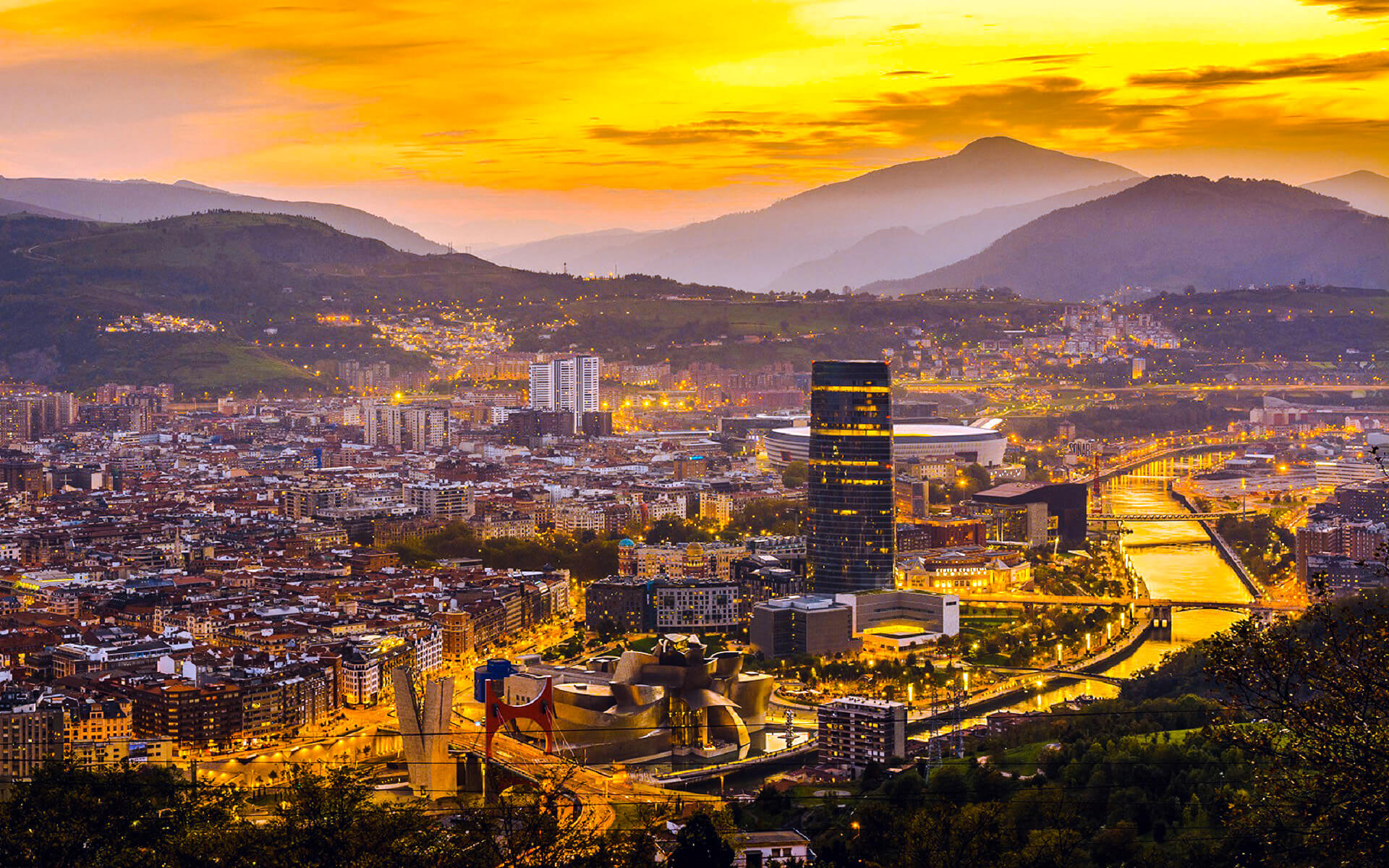 Bilbao is a municipality and city in Spain, a significant metropolis in the province of Biscay in the Basque Country autonomous community. With a population of 353,187 in 2010, it is the biggest municipality in the Autonomous Community of the Basque Country and the tenth largest in Spain. The Bilbao metropolitan region has around 1 million residents, making it one of the most populated metropolitan areas in northern Spain; the comarca of Greater Bilbao is Spain’s fifth-largest urban area, with a population of 875,552. Bilbao is also the largest city in what is known as the Greater Basque region.

Bilbao is located in north-central Spain, about 16 kilometers (10 miles) south of the Bay of Biscay, which is where the economic and social growth takes place and where the Bilbao estuary is created. Its major metropolitan centre is bordered by two tiny mountain ranges that rise to a height of 400 meters on average (1,300 ft).

Bilbao was a commercial metropolis of the Basque Country that had enormous prominence in Green Spain from its creation in the early 14th century by Diego López V de Haro, leader of the wealthy Haro family. This was owing to its port activities, which was focused on the export of iron from Biscayan quarries. Bilbao witnessed substantial industry over the nineteenth and early twentieth centuries, making it the center of Spain’s second-most industrialised area, behind Barcelona. At the same time, an unprecedented population expansion necessitated the annexation of numerous neighboring towns. Bilbao is now a thriving service city undergoing ongoing social, economic, and aesthetic revitalization, which began with the iconic Bilbao Guggenheim Museum and is being continued by infrastructure investments such as the airport terminal, the rapid transit system, the tram line, the Alhóndiga, and the currently under construction Abandoibarra and Zorrozaurre renewal projects.

Athletic Club de Bilbao, a key symbol of Basque nationalism owing to its support of Basque players, is also based in Bilbao. It is one of the most successful clubs in Spanish football history.

Bilbao is the biggest city in Spain’s Basque Country, located on the banks of the Nervión. The greenery of Bilbao is both a gift and a curse: the climate here is both a pleasant break from the heat of the arid plains in the south and a thorn in the side of those looking for a day at the beach. But the coast of the Bay of Biscay isn’t the major draw; rather, Bilbao is possibly the best place in the world to learn about the Basque people’s old culture and language, which has doggedly held its own through thousands of years and is now utterly unlike any modern-day civilization in Europe.

The initial idea of Bilbao as a tourist destination arose in 1872, with the opening of the railway between Bilbao and the seaside neighborhood of Las Arenas in the municipality of Getxo. Bilbao became a minor beach attraction as a result of the connection.

The big tourist influx, however, would come much later, with the opening of the Guggenheim Museum Bilbao in 1997. Following that, tourist numbers continued to rise, reaching over 615,000 tourists in 2009. Given that Bilbao only had 25,000 visitors in 1995, the tendency was exponential. Bilbao also receives 31% of all tourists to the Basque Country, making it the leading attraction in this autonomous community, surpassing San Sebastián. The bulk of visitors are domestic, with the majority coming from Madrid and Catalonia. International visitors are mostly French, crossing the border to the east. Others are arriving from the United Kingdom, Germany, and Italy. Tourism contributes around 300 million euros to the Biscayan GDP each year. Bilbao also attracts corporate tourists, thanks to facilities such as the Euskalduna Conference Centre and Concert Hall, as well as the Bilbao Exhibition Centre, which is located in neighboring Barakaldo.

Bilbao has an oceanic climate (Cfb) due to its closeness to the Bay of Biscay, with precipitation occuring throughout the year and no distinct dry summer. Precipitation is plentiful, and given the latitude and atmospheric dynamics, wet days account for 45 percent of the yearly total, while overcast days account for 40 percent. The rainy season lasts from October to April, with November being the wettest month. Snow does not fall often in Bilbao, although it is possible to observe it on the peaks of the neighboring mountains. Sleet is more common, occurring around 10 days per year, mostly during the winter months. With an August daily mean temperature of 20.9 °C (69.6 °F), Bilbao is the closest Atlantic coastal city to the subtropical boundary of all the cities in the country. Summers are similarly dry, with just around 50 millimetres (2.0 in) of rain in July – but not dry enough to be classified Mediterranean.

Bilbao is situated on the northern tip of the Iberian Peninsula, approximately 16 kilometers (10 miles) from the Bay of Biscay. It has a total area of 40.65 square kilometers (15.70 square miles), of which 17.35 square kilometers (6.70 square miles) are urban and the remainder 23.30 square kilometers (9.00 square miles) are mountainous. The claimed average altitude is 19 metres (62 feet), however readings range from 6 metres (20 feet) to 32 metres (105 ft). It is also the administrative center of the Greater Bilbao comarca. It is bounded to the north by the municipalities of Derio, Etxebarri, Galdakao, Loiu, Sondika, and Zamudio; to the west by Arrigorriaga and Basauri; to the south by Alonsotegi; and to the east by Barakaldo and Erandio.

Bilbao is situated on the Basque threshold, which separates the greater Cantabrian Mountains from the Pyrenees. The soil is mostly made up of mesozoic rocks (limestone, sandstone, and marl) that have been sedimented over a primitive paleozoic basis. The province’s relief is characterized by NW-SE and WNW-ESE directed folds. The primary fold is the anticline of Bilbao, which stretches from Elorrio to Galdames. Within Bilbao, there are two secondary folds: one in the northeast, made up of Mounts Artxanda, Avril, Banderas, Pikota, San Bernabé, and Cabras, and the other in the south, made up of Mounts Kobetas, Restaleku, Pagasarri, and Arraiz. Mount Ganeta, at 689 metres (2,260 feet), is the highest point in the municipality, followed by Mount Pagasarri, at 673 metres (2,208 feet), both on the boundary with Alonsotegi.

Bilbao has been the economic center of the Basque Country since the Consulate, primarily due to commerce in Castilian products on the town’s port, but it was not until the 19th century that it experimented with large development, primarily based on the exploitation of iron mines and siderurgy, which promoted maritimal traffic, portuary activity, and ship construction. During those years, the Banco de Bilbao (Bank of Bilbao), founded in Bilbao in 1857, and the Banco de Vizcaya (Bank of Biscay), founded in 1901, both in Bilbao, first appeared. In 1988, the two companies joined to become the BBV conglomerate (Banco Bilbao Vizcaya, Bank of Bilbao-Biscay). In 1999, BBV amalgamated with Argentaria to become the present business, BBVA. Caja de Ahorros Municipal de Bilbao (Municipal Savings Bank of Bilbao) in 1907 and Caja de Ahorros Provincial de Vizcaya (Provincial Savings Bank of Biscay) in 1921 would combine in 1990 to become Bilbao Bizkaia Kutxa (BBK). There is also the Bilbao Chamber of Commerce, Industry, and Navigation, as well as the Bilbao Stock Exchange Market, which was formed in 1890.

Bilbao was forced to reassess its core economic roots after the devastating industrial crisis of the 1980s. That is how it became a thriving service town. Bilbao is home to a number of national and international enterprises, including two ranked among the top 150 in the world by Forbes magazine: BBVA at #40 and Iberdrola at #122. In 2005, the city’s GDP per capita was €26,225, which was much higher than the national average of €22,152. The strongest industries, according to the official economic yearbook, are construction, trade, and tourism. In 2009, the unemployment rate was 14.4 percent, far below the national average of 18.01 percent. Nonetheless, it is the highest rate in 10 years.