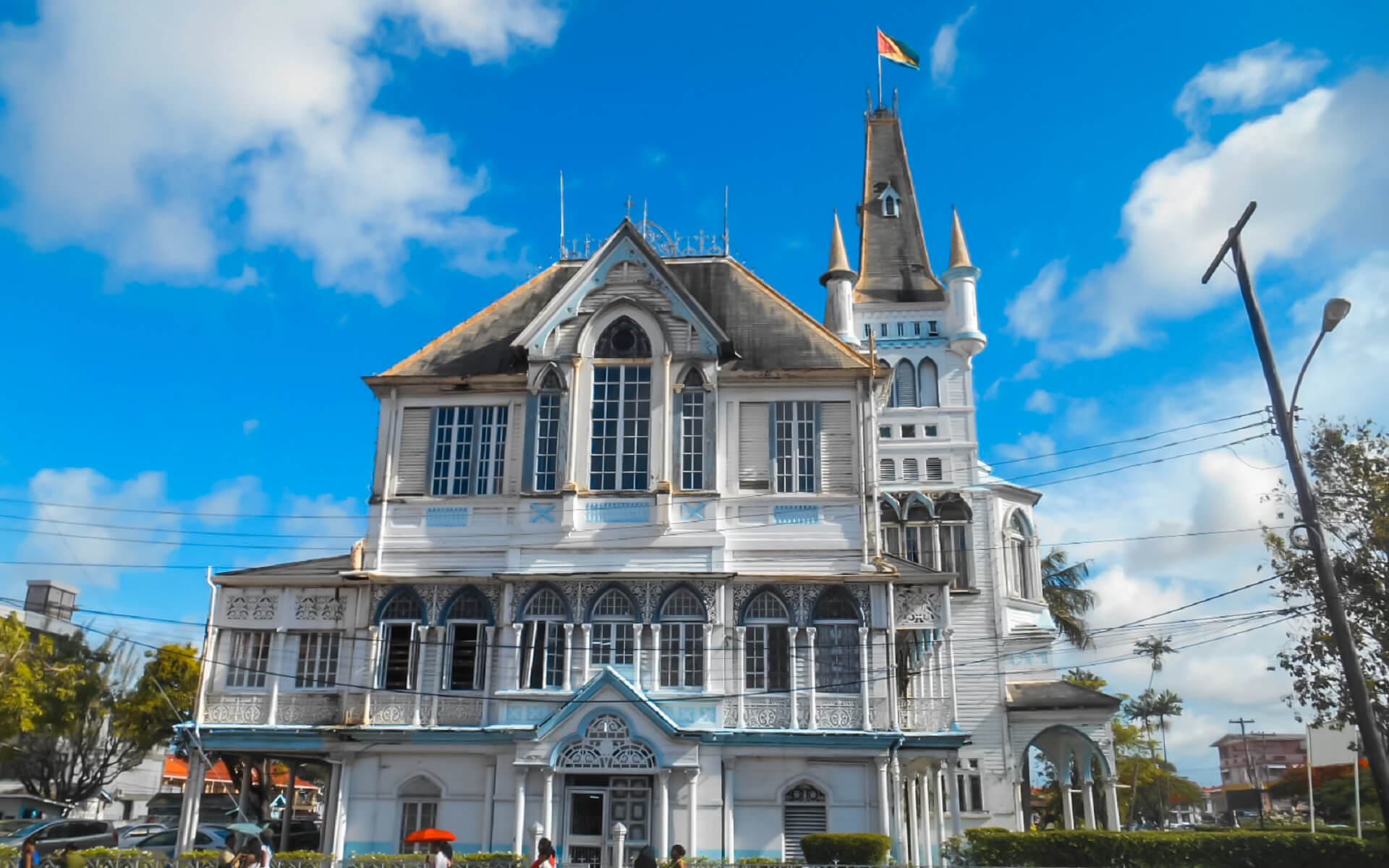 Georgetown is Guyana’s capital and is situated in Area 4, often known as the Demerara-Mahaica region. It is the country’s most populous city. It is located on the Atlantic Ocean coast near the entrance of the Demerara River and has been dubbed the “Garden City of the Caribbean.”

Georgetown is largely a commercial and administrative center. It also functions as a financial services center. In the 2012 census, the city had a population of 118,363.

Georgetown is largely the country’s financial and political center, but its magnificent wooden colonial buildings provide a unique experience for visitors. Most visitors come to Georgetown as a starting point for exploring the inner jungles.

St. George’s Anglican Cathedral, Stabroek Market, Demerara Harbour Bridge, the Guyana Museum, and the Pegasus Hotel are among the numerous tourist attractions in Georgetown. Georgetown attracts about 450,000 visitors every year, accounting for over 86 percent of all tourism in Guyana. There is a zoo, a lighthouse, and Amerindian dwellings in the city.

Georgetown enjoys a hot tropical rainforest environment all year. Relative humidity varies throughout the year, with the greatest levels in May, June, August, and December–January; these are often the rainiest months of the year. Between September and November, relative humidity drops, ushering in the drier season.

Georgetown does not have a true dry season; monthly precipitation in all 12 months exceeds 60 mm (2.4 in). Georgetown’s temperatures are mitigated by the North-East trade winds flowing in from the North Atlantic due to its position, and it seldom experiences temperatures exceeding 31 degrees Celsius.

Georgetown is situated on the east bank of the Demerara River estuary on Guyana’s Atlantic coast. The city is situated on flat coastal plains in this area of the nation. On the east and south, the city is surrounded by a blanket of cane fields, swampy marshes, and savannah regions. The land’s elevation is one metre below the high tide level. This low elevation is secured by a retaining wall known as the seawall, which keeps the ocean out, as well as an inventive network of canals with kokers, which drain the city of surplus water.

Georgetown is Guyana’s major urban center and the site of most of the country’s business. It is a significant city in Guyana and the Caribbean. The CARICOM headquarters, the Administrative Arm of the Caribbean Regional Integration Organization, is located inside the metro area. Georgetown also has a seaport. Cheddi Jagan International Airport/Timehri, located an hour south of Georgetown, is a destination for Caribbean Airlines (previously known as BWIA or “”bwee””), LIAT, META, and Travel Span GT.

Closer to the city is the recently enlarged Ogle Airport, which has a terminal complex designed to handle regional, international, and inter-Caricom flights linking CARICOM member countries with the CARICOM Secretariat. Although the four-lane East Coast Transportation was finished in 2005, the city has several highway projects under development. Georgetown contributes significantly to Guyana’s GDP.