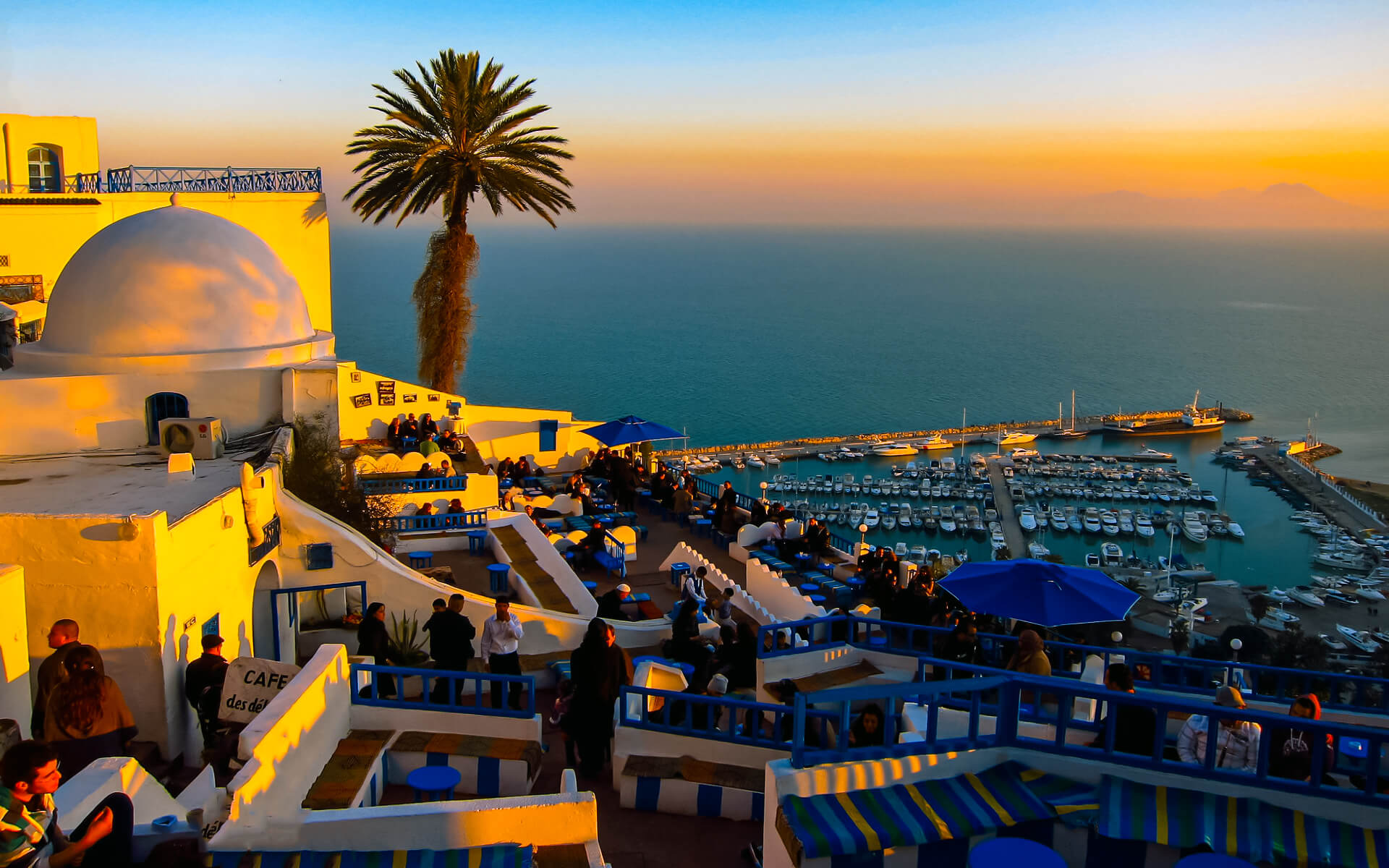 Tunis is Tunisia’s capital as well as its biggest city. Tunis’s broader metropolitan region, known as Grand Tunis, has a population of almost 2,700,000 people.

The city stretches over the coastal plain and the hills that surround it, situated on a huge Mediterranean Sea gulf (the Gulf of Tunis), behind the Lake of Tunis and the port of La Goulette (alq il-Wd). Its historic medina, a UNESCO World Heritage Site, is at its heart. The suburbs of Carthage, La Marsa, and Sidi Bou Said are located outside this area.

The contemporary city starts just beyond the Sea Gate (also known as the Bab el Bahr and the Porte de France), where colonial-era buildings stand in stark contrast to smaller, older structures.

Tunis, being the country’s capital, is the epicenter of Tunisian political and administrative life, as well as the country’s economic activities. The fast modernization of Tunisia’s economy is mirrored in the flourishing growth of the outer city, where the social issues posed by rapid modernization are abundantly visible.

There aren’t many must-see sights, but the city offers a unique combination of old and modern. Furthermore, the souq is one of the most genuine and hassle-free in North Africa, and the Carthage ruins are readily accessible from here.

Tunis, located on the Mediterranean coast but lacking in beaches, has avoided the assault of package tourism to the destinations to the north and south.

The world heritage-listed old town is a vibrant, teeming maze of painted ancient homes, vaults, and street sellers. You can only move around on your feet.

The Avenue de France One of Tunis’s busiest streets. It is surrounded by stores, restaurants, and architecturally significant buildings.

Place de la Victoire (Victory Square). A bustling area near the medina’s entrance. It is surrounded by stores, cafés, and the ornate structure that houses the United Kingdom’s High Commission.

St. Vincent de Paul Cathedral This is the biggest remaining edifice from Tunis’s colonial period, built in the neo-Romanesque style in 1882. It was named after St. Vincent de Paul, a local priest who was sold as a slave and battled slavery after being freed. A golden mosaic depicting Jesus and two trumpet-playing angels adorns the exterior.

Zitouna Grand Mosquée This Aghlabite mosque, Tunisia’s biggest and most prominent monument, goes back to the 8th century, but the unique square minaret was added considerably later in the 19th century. Non-Muslims may only visit an observation platform on the perimeter of the courtyard, not the mosque itself, and must dress modestly. After the 2010 revolution, it was closed to tourists.

Souk El Belat, Medersa Bachia. Quran school from the 18th century, designated a national monument in 1912. Non-Muslims are not permitted to enter.

Rue Tourbet el-Bey, Tourbet el-Bey. An imposing 18th-century mausoleum that served as the last resting place for approximately 160 princes, ministers, and their families. Inside, the eight-pointed star signifies the gates to heaven.

Tunis has a hot-summer Mediterranean climate with a hot and dry season and warm winters with modest precipitation.

The local climate is additionally influenced by the city’s latitude, the moderating impact of the Mediterranean Sea, and the geography of the hills.

Winter is the wettest season of the year, with more than a third of the yearly rainfall falling during this time, with rain falling every two or three days on average. During the winter, the sun may still raise the temperature from 7 °C (45 °F) in the morning to 16 °C (61 °F) in the afternoon. Frosts are uncommon or non-existent.

Summer is devoid of rain, and the amount of sunshine is at its peak. The summer months of June, July, August, and September have very high average temperatures. Sea breezes may help to keep the heat at bay, but sirocco winds can have the opposite effect.

Autumn brings rain, frequently in the form of brief thunderstorms that may trigger flash floods or even flood areas of the city.

Tunis is constructed on a hill that slopes down to the Tunis Lake. These hills are home to Notre-Dame de Tunis, Ras Tabia, La Rabta, La Kasbah, Montfleury, and La Manoubia, all of which have elevations higher than 50 meters. The city is situated at the intersection of a short strip of land between Lake Tunis and Séjoumi. The isthmus between them is known as the “Tunis dome,” and it is made up of hills of limestone and sediments. It constitutes a natural bridge, from which numerous main highways leading to Egypt and other parts of Tunisia have sprung since ancient times. The routes are also linked to Carthage, emphasizing its political and economic prominence not just in Tunisia but across Africa throughout the Roman era.

The Greater Tunis region encompasses 300,000 hectares, 30,000 of which are urbanized, with the remainder divided among bodies of water (20,000 hectares of lakes or lagoons) and agricultural or natural terrain (250,000 hectares). However, urban expansion, which is predicted to increase by 500 hectares each year, is progressively transforming the environment.

Tunis is the sole nationally rated metropolis due to the concentration of political command (headquarters of the central government, president, parliament, ministries and central government) and culture (festivals and mainstream media). Tunis is the center of the Tunisian economy and the country’s industrial and economic centre, housing one-third of Tunisian firms and practically all corporate headquarters.

The Gulf Finance House, or GFH, has committed $10 billion in the building of Tunisia’s financial port, which would convert Tunisia into Europe’s gateway to Africa. The initiative aims to strengthen Tunisia’s economy as well as increase the number of tourists that visit the country each year. The project is still in the planning stages.