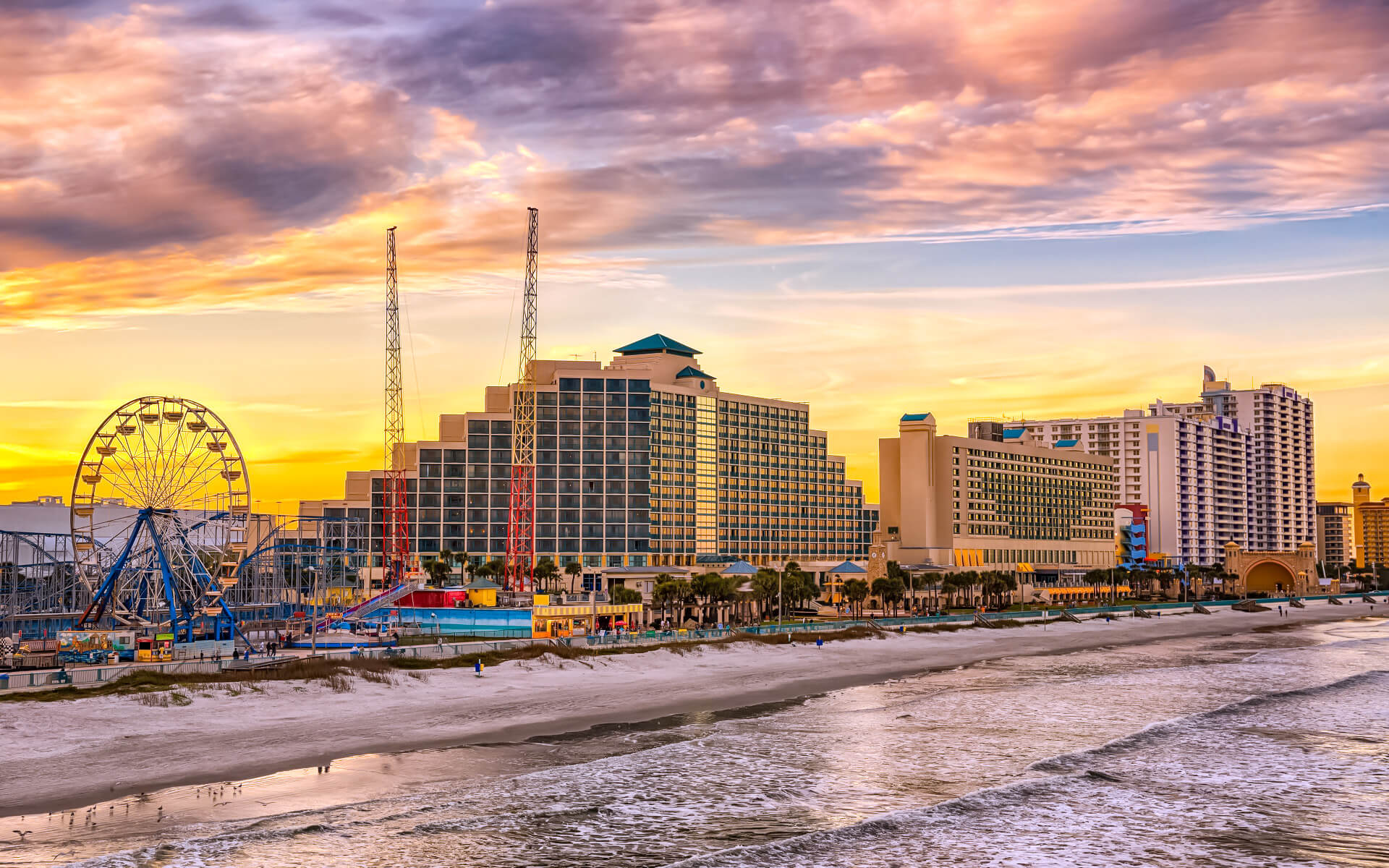 Historically, the city was famed for its beach, where the hard-packed sand allows motorized vehicles to travel on the beach in certain spots. Daytona Beach’s hard-packed sand made it a racing hotspot, and the original Daytona Beach Road Course staged races for more than 50 years. This was superseded by Daytona International Speedway in 1959. Additionally, the city is home to NASCAR’s headquarters.

Daytona Beach attracts significant numbers of out-of-town visitors for a variety of events, most notably Speedweeks in early February, when over 200,000 NASCAR fans converge on the city for the season-opening Daytona 500. Additionally, the NASCAR Coke Zero 400 race takes place in July, Bike Week takes place in early March, Biketoberfest takes place in late October, and the 24 Hours of Daytona endurance competition takes place in January.

Daytona Beach is known as the “World Center of Racing” and is the home of NASCAR. It is located in the East Central Florida metropolitan region. Daytona Beach is the most well-known of the seven communities in the region. While the large 23-mile (37-kilometer) length of white sand beach remains the region’s primary draw, with over 8 million tourists annually, the metro area is gradually transitioning from event mecca to family-oriented vacation destination. Historic landmarks such as the Main Street Pier, the Oceanfront Boardwalk, and the Clocktower in Oceanfront Park all contribute to the city’s allure.

Daytona Beach is located on the Atlantic Ocean’s coast and is divided in half by the Halifax River. Holly Hill and Ormond Beach are to the north, while Daytona Beach Shores, South Daytona, and Port Orange are to the south.

Daytona Beach has a subtropical climate that is characteristic of cities in the southeastern United States. Summers are hot and humid, with temperatures often reaching 90°F (32°C) and a heat index frequently exceeding 100°F (38°C). Summer afternoon thunderstorms are common, and the hot, humid weather may persist well into the autumn months. Winters are moderate and dry, with a steady succession of cold fronts followed by milder air. Temperatures can fall into the low 40s and high 30s (5°C) during the winter, however freezes are uncommon. Frost happens on a few occasions each year, mostly in inland places. Snowfall is relatively unusual in Daytona Beach; the last time snow flakes landed here was in January 2003. Spring temperatures are well-known for their pleasantness, with warm afternoons, chilly nights, and much less humidity. By early March, this pleasant weather had reintroduced vacationers to the beaches.

Daytona Beach is divided in half by the Halifax River lagoon, which is a portion of the Intracoastal Waterway, and is located on the Atlantic Ocean. On the north, it is bounded by Holly Hill and Ormond Beach; on the south, it is bordered by Daytona Beach Shores, South Daytona, and Port Orange.

Apart from tourism, the area’s economy is based on other businesses, such as manufacturing. Daytona Beach features industrial zones and international trade zones near to the Daytona Beach International Airport. There are accessible prime Interstate 4 and Interstate 95 locations with access to road, air, rail, and marine transit.

Local calls in the Daytona Beach region are made using seven-digit dialing. The area code for this city is 386. Dial “1+area code+number” for calls inside the United States or Canada. There are a few public pay phones spread around the city, but they are becoming more scarce as mobile phones become more prevalent. It is dangerous to believe that you will always be able to locate a pay phone.

The city of Daytona Beach’s ZIP codes all begin with 321.

Many of the bigger hotels and accommodations in the region provide their customers with some kind of internet connectivity.

Volusia County citizens may use public libraries’ computers for free. Non-residents are subject to a modest fee.