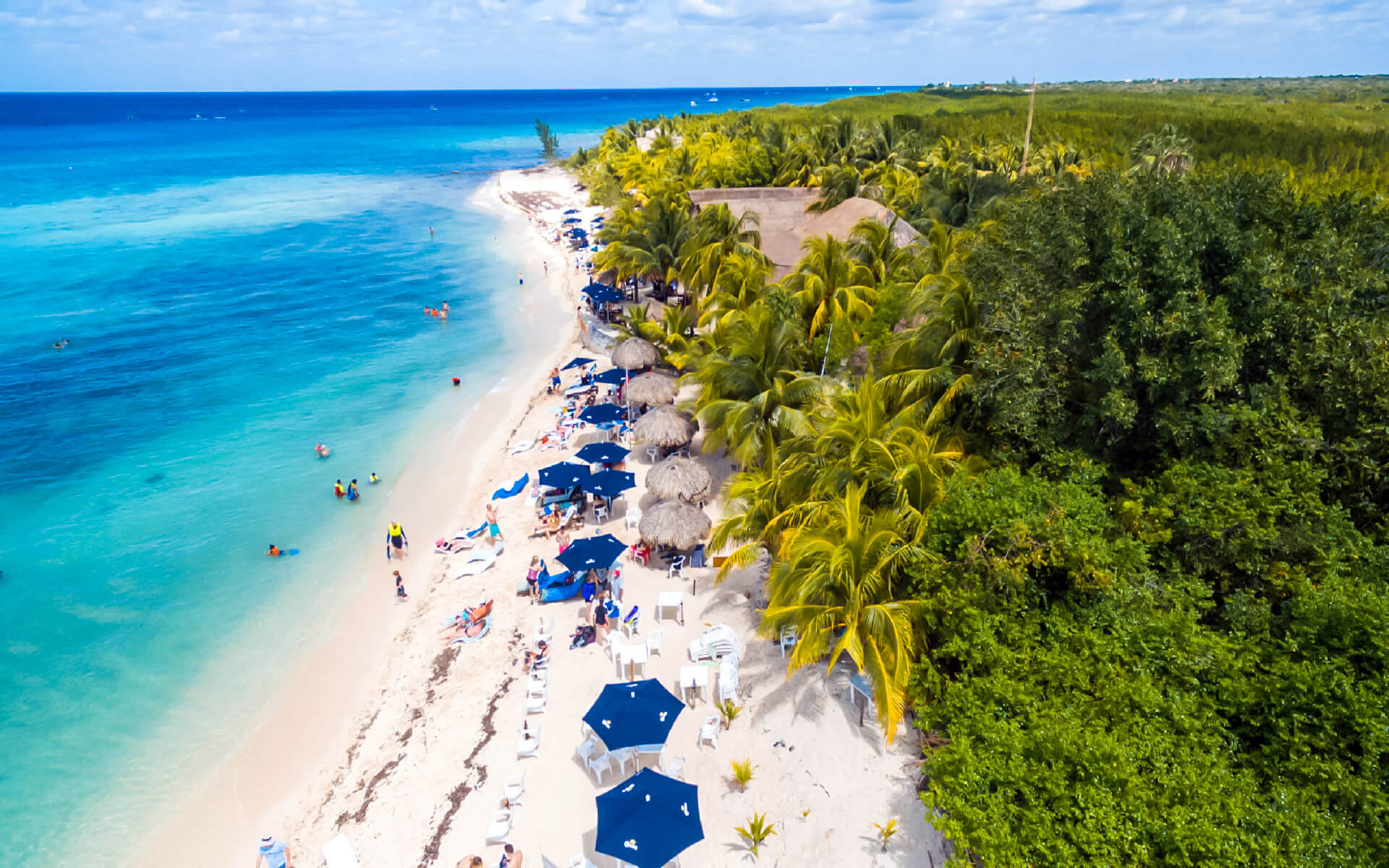 Cozumel is a Caribbean island located in southeastern Mexico, right off the Yucatán Peninsula. It features excellent diving, friendly locals, safe streets, and rates that are similar to those found in other Mexican tourist spots. Cozumel is mostly known for its diving; if you like white sand beaches, other surrounding resorts are a better alternative (e.g., Playa del Carmen, Tulum, Isla Mujeres.) It was severely damaged by Hurricane Wilma in 2005, but has been totally reconstructed with few exceptions.

Clear turquoise seas and white beaches entice vacationers from chilly winter areas to this approximately 185-square-mile island off the Yucatán Peninsula. Cruise ships dominate the coastline vistas of Cozumel, and the mood on this picturesque island is often disturbed by visitor noise. Indeed, Cozumel’s allure is so strong that the retail plazas along the shoreline remain packed for the most of the year.

However, overcrowding should not discourage you from exploring what this little Yucatán island has to offer, particularly given that the true charm of Cozumel is located outside the main area. You may rent a fishing or diving charter boat to explore the shallow reefs along the coast (this is undoubtedly one of the world’s top diving sites), take a glass-bottom boat trip around the island, or just locate a quiet beach to unwind. Once the cruise ships have disembarked, make your way to a local tavern for some live music and the genuine scoop on this little island.

The island is situated in the Caribbean Sea on the Yucatán Peninsula’s eastern coast, about 82 kilometers (51 miles) south of Cancún and 19 kilometers (12 miles) from the mainland. The island is around 48 kilometers (30 miles) in length and 16 kilometers (9.9 miles) in width. With a total size of 477.961 kilometers (184.542 square miles), it is Mexico’s biggest Caribbean island, largest permanently populated island, and third largest island, behind Tiburón and Isla ngel de la Guarda.

The island’s population is concentrated in the town of San Miguel (population 77,236 in 2010), which is located on the island’s western coast. The municipality has a total land area of 647.33 km2, which includes two minor portions on the mainland enclaved inside the Municipality of Solidaridad with a land size of 10.423 km2 (4.024 sq mi) (249.93 sq mi).

Much of the island is covered in mangrove forest, which is home to several rare animal species. Cozumel is a flat limestone island with a karst landscape. The island’s highest natural point is less than 15 meters (49 feet) above sea level. Cenotes are deep water-filled sinkholes developed over thousands of years by water trickling through the fragile limestone soil. The cenotes of Cozumel are only accessible to certified cave divers with the necessary qualifications.

Diverse coral reefs surround Cozumel, with the westernmost reef being the most developed. Due to the powerful currents that run across these reefs, divers should take care. Cozumel’s deeper coral reefs were once renowned for its black corals, however black coral populations decreased due to overharvesting from the 1960s to the mid-1990s and had not recovered by 2016.

Cozumel is thought to have been established by the Maya in the early first millennium AD, while ancient Preclassic Olmec artifacts have also been discovered on the island. The island was dedicated to Ix Chel, the Maya Moon Goddess, and the temples on the island were a popular destination for pilgrims, particularly for women wishing childbirth. The island is home to a variety of ruins, the most of which date from the Post-Classic era. The island’s greatest Maya ruins were located in the island’s downtown area and have since been demolished. Today, the greatest remnants remain in San Gervasio, which is situated about near the island’s center.

Juan de Grijalva conducted the first Spanish expedition to Cozumel in 1518. Hernán Cortés paid a visit to the island the next year on his route to Veracruz. The Grijalva and Cortés missions were both amicably accepted by the Maya of Cozumel, in contrast to their experiences on the mainland. Even after Cortés destroyed many Maya idols on Cozumel and replaced them with an image of the Virgin Mary, the indigenous residents of the island continued to assist the Spanish in replenishing their ships with food and water to continue their trips. At this point, Gerónimo de Aguilar was saved.

Originally, the island was home to up to 10,000 Maya, but in 1520, diseased crew members of the Pánfilo Narváez expedition introduced smallpox to the island, and by 1570, only 186 men and 172 women remained alive. Cozumel was often attacked by pirates in the years that followed, and in 1650, many island residents were forced evacuated to the mainland town of Xcan Boloná to escape the Buccaneers’ predation. Later that year, in 1688, the majority of the island’s remaining inhabitants, as well as a number of communities along the Quintana Roo coast, were evacuated inland to places such as Chemax.

Refugees from Yucatán’s Caste War landed on the island in 1848, and the town of San Miguel de Cozumel was formally acknowledged by the Mexican government in 1849.

In 1861, American President Abraham Lincoln sent his Secretary of State, William Henry Seward, to meet with Mexican chargé d’affaires Matias Romero to discuss the prospect of acquiring the island of Cozumel in order to relocate freed American slaves offshore. Although Mexican President Benito Juarez categorically rejected the notion, Lincoln did build a brief colony of ex-slaves on Île à Vache off the coast of Haiti in 1862.

Although the previous airport was a World War II remnant and was capable of handling jet aircraft and international flights, the late 1970s saw the construction of a considerably bigger facility.

Scuba diving remains one of Cozumel’s key attractions, owing largely to the coral reef off the island’s western side. The natural geology of the island protects these coral reefs from the open ocean. Additionally, the Mexican government created the Cozumel Reefs National Marine Park in 1996, prohibiting the handling or removal of marine creatures inside the park’s limits. Despite the critical nature of healthy reefs to Cozumel’s tourism industry, a deepwater pier for cruise ships was constructed in the 1990s, inflicting damage to the reefs, and it is now a frequent destination on Caribbean cruises. Coral reef health has deteriorated substantially in Cozumel over the last several decades, with much less coral cover presently present than was previously observed.

During the 2005 Atlantic hurricane season, the island was directly hit by two Category 4 storms. Hurricane Emily made landfall just south of Cozumel in July, exposing the island to the storm’s ferocious inner core. Despite the fact that Emily was a major storm, it was the bigger, stronger, and slower-moving Hurricane Wilma that wreaked the greatest havoc on the island in October. Wilma’s gaze straddled Cozumel.

The undersea aquatic ecosystem sustained some harm. This includes coral reefs, which were especially hard hit at shallower dive sites, as well as the species that live on them.

The island’s economy is mostly based on tourism, diving, and charter fishing. On the island, there are over 300 restaurants and several hotels, some of which operate diving operations and have swimming pools, private docks, and various eating options.

Additionally, aquatic sports such as parasailing, kite surfing, and a tourist submarine are available. Additionally, there are two delphiniums. At the cruise ship docks, many square blocks are lined with shops offering Cuban cigars, jewelry, T-shirts, and tequila, among other affordable gifts. Additionally, the island’s northernmost point is home to the Caribbean’s sole operational pearl farm.

San Miguel is home to a plethora of restaurants serving a diverse range of cuisines, as well as various discotheques, pubs, theaters, and outdoor stages. The main square is ringed by stores; in the center of the plaza is a permanent stage where Cozumeleos and visitors gather for music and dancing every Sunday evening.

The island receives all food and manufactured materials by ship. Three desalination plants situated on the island supply water.