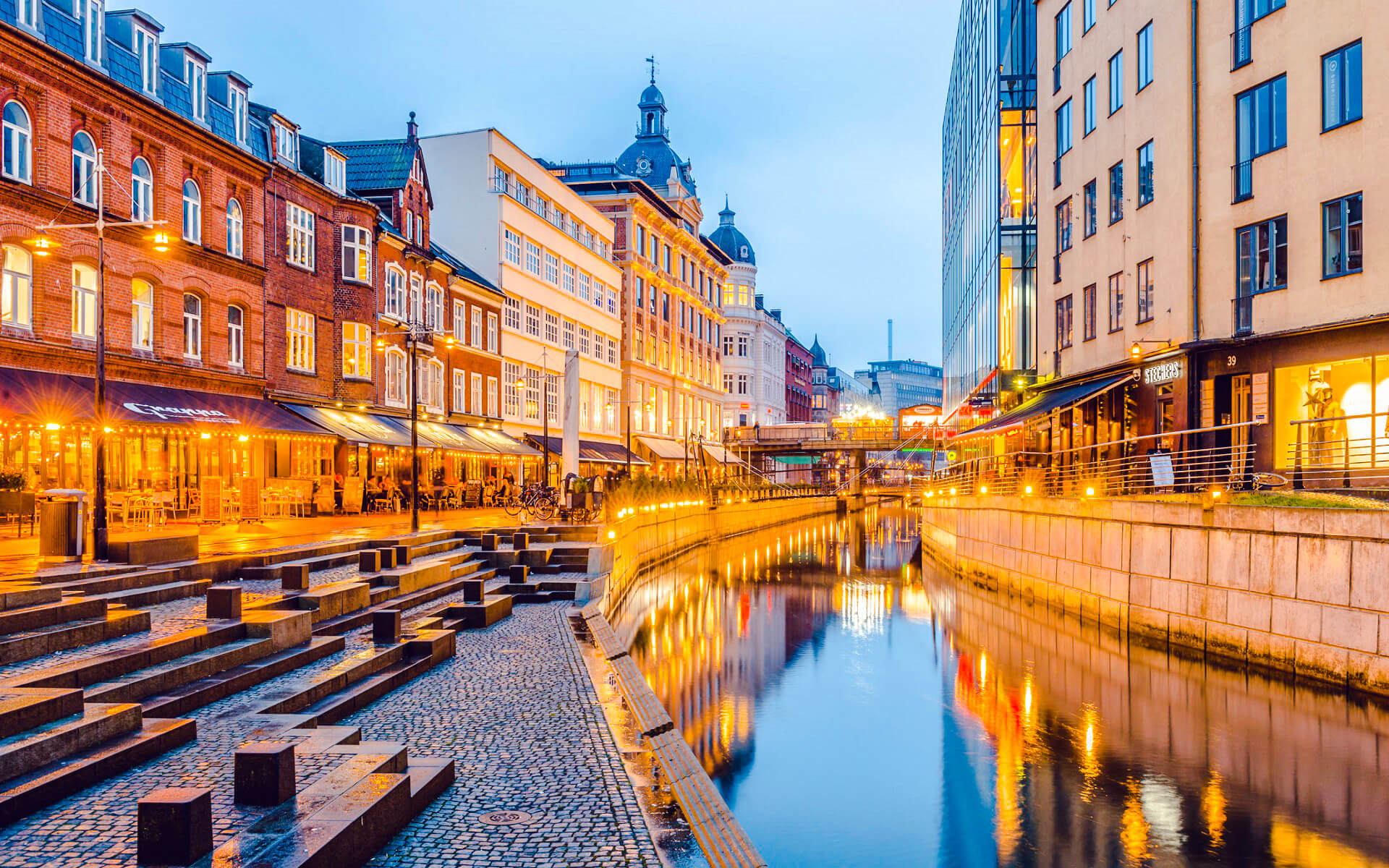 Aarhus is Denmark’s second-largest city and the seat of the Aarhus municipality. It is situated in the geographical center of Denmark, 187 kilometers (116 miles) northwest of Copenhagen and 289 kilometers (180 miles) north of Hamburg, Germany, on the east coast of the Jutland peninsula. The inner urban area has 264,716 residents (as of 1 January 2016), whereas the municipal population is 330,639 people (as of 2016). Aarhus is the principal city of the East Jutland metropolitan region, which had 1.378 million people in 2016.

Aarhus’ history started as a fortified Viking town constructed in the eighth century, with the oldest written documents being from the bishopric sitting here since at least 948. The city was built on the northern sides of a fjord at a natural harbor, and for centuries, seaborne commerce in agricultural goods was the principal source of expansion. Market town rights were granted in 1441, but expansion slowed in the 17th century due to blockades and bombardments during the Swedish Wars. During the Schleswig Wars in the nineteenth century, it was seized twice by German forces but escaped destruction. As the industrial revolution took root, the city developed to become the country’s second-largest by the twentieth century.

Today, Aarhus is the region’s cultural and economic hub, as well as the major center for commerce, services, and industry in Jutland. The city is the 92nd biggest in the European Union and the 234th largest in the globe. It is also one of the top 100 conference cities in the globe. Aarhus is the country’s main industrial port in terms of container handling, as well as a major trading centre in Kattegat. Major Danish corporations have established their headquarters here, and people travel for work and recreation from all around Region Midtjylland. It is a Nordic research and education hub, and it is home to Aarhus University, Scandinavia’s biggest university, as well as Aarhus University Hospital and INCUBA Science Park. Aarhus is the Danish city with the youngest demographics, with 48,482 residents under the age of 18. It is also one of the fastest growing Danish cities, with an average annual growth rate of 4,000 persons since 2010.

Aarhus is well-known for its musical heritage. Many jazz clubs popped up across the city in the 1950s, fueled by the city’s youthful population. By the 1960s, the music scene had expanded to include rock and other genres. Aarhus became the center of Danish rock music in the 1970s and 1980s, spawning numerous notable bands such as TV-2 and Gnags. The annual eight-day Aarhus International Jazz Festival, the SPoT Festival, and the NorthSide Festival are all held in Aarhus.

Aarhus is an attractive combination of modern metropolis and charming small-town charm, with fantastic bars, restaurants, and romantic spots. Aarhus, being a university city and educational center, has a significant student population, and the average age of its residents is among the lowest in Europe.

Denmark’s major tourist attractions are the ARoS Art Museum, the Old Town Museum, and Tivoli Friheden. With about 1.4 million tourists, they are the primary force behind tourism, although other attractions such as Moesgrd Museum and Kvindemuseet are also popular. Tourists are claimed to be drawn to the city’s large retail facilities, as well as festivals such as NorthSide and SPOT. Many people come on cruise ships: in 2012, 18 ships with over 38,000 passengers visited the port.

There was a considerable growth of tourism facilities in the 2010s, culminating in the July 2014 completion of the 240-room Comwell Hotel, which boosted the number of hotel rooms in the city by 25%. According to some estimates, 750,000 people stay at least one night each year, the majority of whom are Danes from other areas, with the rest mostly from Norway, Sweden, northern Germany, and the United Kingdom. Every year, they spend around DKK 3 billion ($540 million) in the city. The main reasons why visitors choose Aarhus as a destination are to experience the city and culture, to go on a family or couple’s holiday, or as part of a round trip in Denmark. The average length of stay is little over three days.

There are about 30 tourist information points located throughout the city, some of which are manned, while others are online, publicly accessible touch displays. VisitAaarhus, a corporate foundation founded in 1994 by Aarhus Municipality and local business interest organizations, organizes the official tourist information service in Aarhus.

Aarhus has a humid continental climate, and the weather is affected by low-pressure systems from the Atlantic, resulting in variable conditions all year. Temperatures vary greatly throughout seasons, with a moderate spring in April and May, warmer summer months from June to August, usually wet and windy autumn months in October and September, and milder winter months from December to March, often with snow and frost. The city center is subject to the same climatic influences as other major cities, with greater wind speeds, more fog, less precipitation, and higher temperatures than the surrounding, open area.

The Atlantic and North Sea winds are prevalent, resulting in heavier precipitation in western Denmark. Furthermore, Jutland rises enough in the center to raise air to higher, colder heights, resulting to greater precipitation in eastern Jutland. These factors combine to make east and south Jutland wetter than the rest of the nation. The annual average temperature is 8.43 °C (47 °F), with February being the coldest month (0.1 °C) and August being the hottest (15.9 °C). In June and August, water temperatures may reach 17 to 22 degrees Celsius, although it is not unusual for beaches to report 25 degrees Celsius.

The local climate is influenced by the topography of the region, with Aarhus Bay exerting a temperate impact on the low-lying valley floor where downtown Aarhus is situated. Brabrand Lake to the west adds to this influence, resulting in a relatively moderate, temperate climate in the valley. The valley floor’s sandy ground dries up rapidly after winter and heats up faster in the summer than the surrounding hills of moist-retaining boulder clay. These factors have an impact on crops and plants, which blossom 1–2 weeks sooner in the valley than on the northern and southern slopes.

Aarhus is situated in the Bay of Aarhus, facing the Kattegat Sea to the east, with the Mols and Helgen peninsulas across the bay to the northeast. Mols and Helgens are both part of Djursland, a bigger regional peninsula. Randers (38.5 kilometers (23.9 mi) by road north), Gren (northeast), Horsens (50 kilometers (31 mi) south), and Silkeborg (44 kilometers (27 mi) east) are all easily accessible by road and rail from Aarhus.

Aarhus’ economy is mostly knowledge and service oriented, with the University of Aarhus and the big healthcare sector having a significant impact. The city’s economy is dominated by the service sector, which is expanding as the city shifts away from industry. Trade and transportation continue to be key industries, owing to the huge port and vital location on the rail network. Manufacturing has been steadily declining since the 1960s, while agriculture has always been a minor job in the town. The municipality employs 175,000 people, with 100,000 working in the private sector and the remainder spread over the state, area, and municipality. With numerous huge farms in the surrounding areas, the region is a significant agricultural producer.

The work market is knowledge and service focused, with healthcare and social services, commerce, education, consulting, research, industry, and telecommunications being the most important employment sectors. The municipality has more high and middle-income occupations than the national average, but less low-income ones.

The bulk of the municipality’s main enterprises are now in the commerce, transportation, and media sectors. The wind power business has deep origins in Aarhus and the broader region of Midtjylland, and enterprises in the greater Aarhus area provide the majority of the industry’s income nationwide. The wind sector employs around a thousand people in the municipality, making it a vital component of the local economy. The city’s biotech sector is highly established, with several small and medium-sized businesses mostly focused on research and development.

With huge shopping malls, the country’s main commercial strip, and a dense urban center filled with specialist stores, the city has emerged as a retail powerhouse in the Nordic and Baltic nations. People travel to Aarhus from as far away as Randers, Silkeborg, and Skanderborg, and over one-third of those working in the municipality of Aarhus commute from neighboring municipalities.

Arla Foods, one of Europe’s largest dairy groups, Dansk Supermarked, Denmark’s largest retailer, Jysk, a global retailer specializing in household goods, bedding, furniture, and interior design, Vestas, one of the world’s largest wind turbine producers, and several leading retail companies have their headquarters in Aarhus. The municipality is home to four of the country’s top ten biggest corporations. Since the early 2000s, the city has seen an inflow of bigger corporations relocate from other areas of the Jutland peninsula. Other notable employers include Krifa (a trade union organization) and 5R, a telemarketing firm, with metallurgy and electronics being key industries.

Aarhus Municipality has made its Wi-Fi public and free. It’s called Smart Aarhus, and it’s free to use in and around most public institutions, as well as many big public squares and parks, day and night.

The majority of bigger cafés provide a free Wi-Fi network.

If you need to use a computer, you may do so in the Dokk1 library on the harbour front, which has numerous free stationary computers. They run the Ubuntu Linux operating system, and you may connect to the internet for free via a sms-authentification system. Printouts are available for a charge.