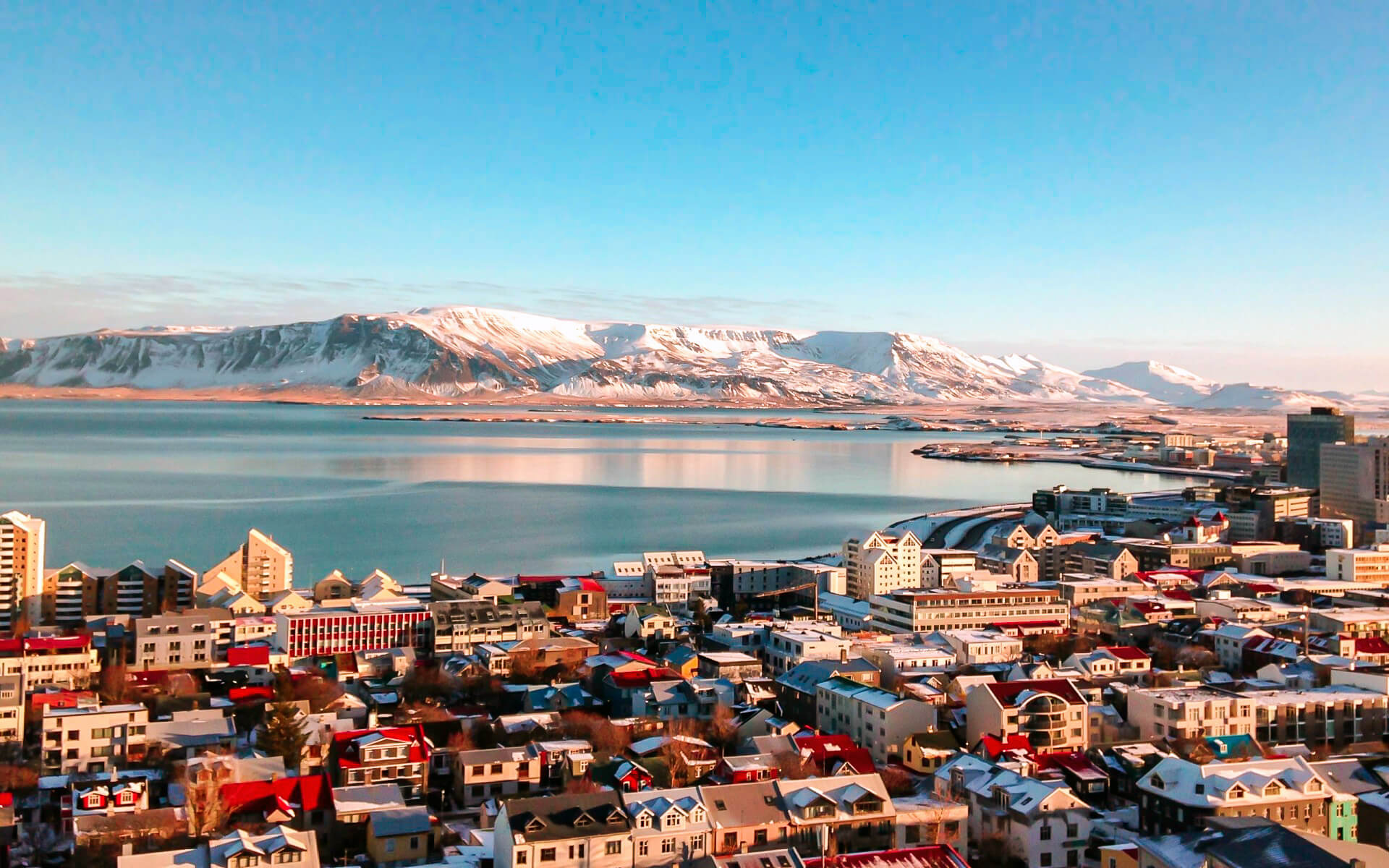 Iceland’s capital and biggest city is Reykjavik. It is the world’s northernmost capital of a sovereign state and a famous tourist attraction, with a latitude of 64°08′ N.

It is situated on the southern edge of Faxaflói Bay in southwestern Iceland. It is the cultural, economic, and governmental hub of Iceland, with a population of roughly 120,000 (and over 200,000 in the Capital Region).

Reykjavik is said to be the site of Iceland’s first permanent settlement, which was built in AD 874 by Ingólfur Arnarson. There was no urban growth in the city site until the 18th century. The city was created in 1786 as an official trade town and developed gradually over the following decades, eventually becoming a regional and then national hub of business, population, and governmental activity. It is one of the world’s cleanest, greenest, and safest cities.

Reykjavik is the cultural and social center of the Icelandic people, as well as one of the main tourist destinations in Iceland. The city is large, with spreading suburbs. The city center, on the other hand, is a fairly tiny region with unique and colorful residences, as well as wonderful shopping, eating, and drinking.

Despite its tiny size, Reykjavik has a lot to offer. There is a thriving music scene, with performances held most nights in the city center. For theatre fans, the city has two big theatres that each stage roughly ten plays a year, both local and international, as well as a number of smaller theatrical organizations that specialize in various types of contemporary theatre.

There are a lot of ways to get a taste of Icelandic environment without leaving the city, and outdoor activities in the city’s surrounding area are many. And no trip to Reykjavik would be complete without visiting one of the geothermal baths.

Weekend nightlife is well-known in Reykjavik. Icelanders prefer to stay out late, so pubs that seem to be empty might unexpectedly fill up—usually after midnight on weekends.

In bars, alcohol is pricey. Before going out, most people drink at home. Beer was illegal in Iceland until March 1, 1989, but it has since become a popular alcoholic beverage among many Icelanders.

In Reykjavik, there are approximately 100 distinct pubs and clubs, the most of them are situated on Laugavegur and its neighboring streets. It is fairly usual for a café before dinner to transform into a bar in the evening. On weekends, the store normally closes around 4:30 a.m., while during the week, it closes at 1 a.m. Iceland Airwaves is an annual music event held in October.

Reykjavik’s weather is notably unpredictability. The sun may be blazing on a beautiful summer day one minute and then turn into a windy, rainy fall the next. Temperatures in Reykjavik are quite consistent: they don’t rise much in the summer and don’t fall far below zero in the winter. As a result, the seasonal fluctuations are minor in comparison to what individuals experience on either side of the Atlantic.

January is the coldest month and normally has some snow, although Christmas in December commonly has no snow on the ground. Summer is without a doubt the most popular season in Reykjavik. Many of them seem to believe their city is somewhat warmer than it is, and it doesn’t take much to encourage them to start wearing shorts and t-shirts or sunbathing in parks.

The primary issue with the weather in Reykjavik is the wind. The city is quite exposed to the ocean, and the winds may be fierce and cold to the bone. Windy areas are often cooler than those with greater cover.

Reykjavik is in southwest Iceland. The coastline of the Reykjavik region is distinguished by peninsulas, bays, straits, and islands.

The Elliaá River is the biggest river that runs through Reykjavik and is impassable. It is one of the top rivers in the nation for salmon fishing. Mount Esja, at 914 m (2,999 ft), is the tallest peak in the Reykjavik area.

Reykjavik is largely situated on the Seltjarnarnes peninsula, although its suburbs extend far to the south and east. Reykjavik is a sprawling city: the majority of its metropolitan area is made up of low-density suburbs, and residences are often widely separated. The outlying residential communities are similarly far separated from one another, with major transportation arteries and a lot of open space in between.

Over the previous decade, Reykjavik has been at the epicenter of Iceland’s economic development and subsequent recession.

The economic boom resulted in a significant surge in building, with huge redevelopment projects like as the Harpa music hall and conference center, among others, being completed.

Reykjavik was named the wealthiest city in the world by The Economist Group in 2007.

Reykjavik has decent mobile phone coverage (including 3G) and a variety of operators, the most prominent of which are Sminn and Vodafone. Most international SIM cards should function without issue, however it is always a good idea to verify with your mobile phone carrier before traveling. In Reykjavik, payphones are nearly non-existent.

Most cafés and even many bars in Reykjavik provide free Wi-Fi. If a password is necessary, just ask the staff. Partly as a result of this, internet cafés have nearly vanished, however GroundZero, Frakkastgur 8, is still open. Be advised that the majority of the clientele consists of gamers. One hour is 600 kr.

Though Icelandic is the official language, English is spoken pretty well by practically everyone you will encounter, so communication should be no issue. A Scandinavian language is also widely spoken.