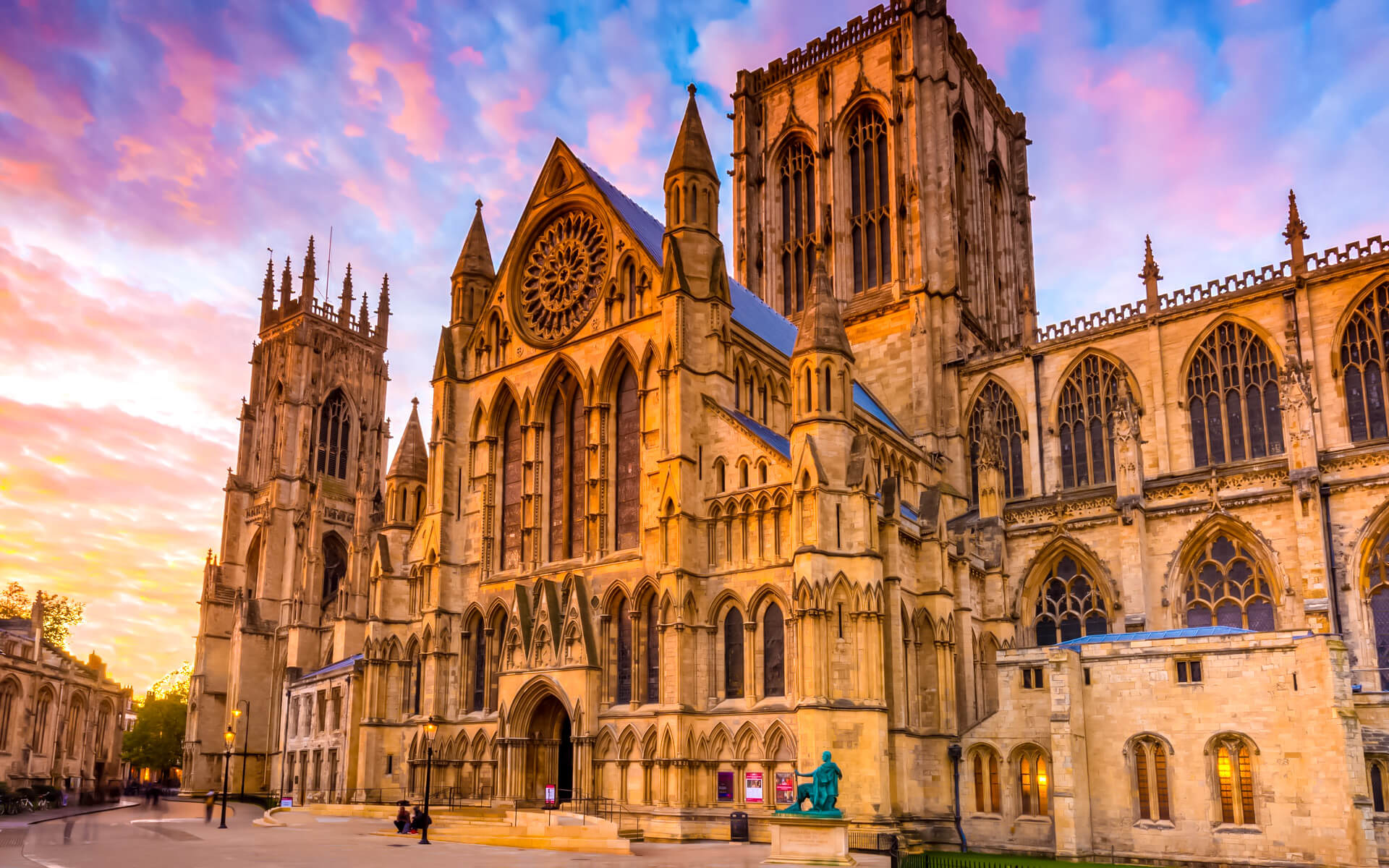 York is an ancient walled city in North Yorkshire, England, near the confluence of the rivers Ouse and Foss. The municipality is named after the historic county town of Yorkshire. The city has a rich history and has served as the setting for key political events in England for most of its two millennia of existence. The city has a multitude of historic sites, the most renowned of which is York Minster, as well as a range of cultural and sports activities, making it a favorite tourist destination for millions.

In 71 AD, the Romans established Eboracum as a city. It was the capital of the Roman province of Britannia Inferior and, subsequently, the kingdoms of Northumbria and Jórvk. York flourished as a significant wool trade center in the Middle Ages and became the headquarters of the Church of England’s northern ecclesiastical province, a function it still plays today.

York became a railway hub and a candy manufacturing center in the nineteenth century. York’s economy has shifted in recent decades from one dominated by confectionery and railway-related sectors to one dominated by services. The University of York and the health services have grown to be substantial employers, and tourism has become an important component of the local economy.

York is a historic cathedral city with a history that predates the Romans. It is located in Yorkshire, North Yorkshire, England, and has some of Europe’s finest preserved ancient buildings and structures. York, along with Manchester, is regularly regarded as the second most visited city in England after London, and it is, of course, renowned for lending its name to the city and state of New York in the United States.

York is a relatively modest city – four days is plenty to visit the key sites – but York is a city that unveils its charms to explorers who are curious and patient.

York is recognized as England’s “City of Events” because it hosts several cultural festivals throughout the year. The Viking Festival, the Festival of Angels, Early Music, Late Music, Horse Racing (the “Ebor Race Meeting”), Multicultural Food and Arts, Chinese New Year, Mystery Plays, Christmas St Nicholas’ Fair, and the Food and Drink Festival are the official festivals. It’s a lovely city for a weekend getaway. York is full of charm and a fantastic destination to take youngsters!

York has four distinct seasons and a mild climate. The city’s climate, like that of the rest of the Vale of York, is drier and warmer than that of the rest of Yorkshire and Humberside. York is prone to frosts, fog, and chilly winds throughout the winter, spring, and early summer due to its lowland position. Snow may occur in winter from December to April, although it rapidly evaporates. York has the greatest sunlight from May to July, with an average of six hours each day. Temperature extremes recorded at the University of York campus between 1998 and 2010 include a high of 34.5 °C (94.1 °F) (Monday 17 July 2006) and a low of 16.3 °C (2.7 °F) (Monday 6 December 2010). The highest amount of rain in a single day was 88.4 mm (3.5 in).

York is located in the Vale of York, a flat tract of good arable land bounded by the Pennines, North York Moors, and Yorkshire Wolds. The city was established on a terminal moraine left by the last Ice Age at the confluence of the rivers Ouse and Foss.

The terrain around the rivers Ouse and Foss was swampy during Roman times, making the place simple to defend. The city is prone to flooding from the River Ouse, and it has an extensive (and mainly efficient) network of flood defences, including walls along the river and a liftable barrier over the River Foss where it meets the Ouse at the ‘Blue Bridge.’ York saw the greatest floods in 375 years in October and November of 2000, with over 300 dwellings inundated. Flooding was more severe in December 2015, causing significant inconvenience. Prime Minister David Cameron paid a personal visit as a result of the significant damage. Much of the area in and surrounding the city sits on flood plains, making it unsuitable for development other than agriculture. The ings are flood meadows along the Ouse, whilst the strays are open common grassland scattered across the city.

York’s economy is built on the service sector, which employed 88.7 percent of the city’s population in 2000. Public sector employment, health, education, finance, information technology (IT), and tourism make for 10.7 percent of total employment. Tourism has grown in importance to the city’s economy, with the city providing a plethora of historic sites, the most renowned of which being York Minster, as well as a range of cultural events. York was the seventh most visited city in the United Kingdom in 2009, and the thirteenth most visited city in the world.

In 2008, unemployment in York was 4.2 percent, compared to the UK national average of 5.3 percent. The City of York Council, which employs over 7,500 people, is York’s largest employer. Aviva (previously Norwich Union Life), Network Rail, Northern, York Hospitals NHS Trust, and the University of York are among the employers with more than 2,000 employees. British Telecom, CPP Group, Nestlé, NFU Mutual, and a number of railway businesses are also big employers.

Today’s economic situation is much different from that of the 1950s, when the country’s economy was founded on chocolate manufacture and railroads. This was the case until the early 1980s, when just five corporations employed 30 percent of the workforce and 75 percent of manufacturing employment were held by four companies. Most of the industry around the railway has vanished, including the carriage plant (known as Asea Brown Boveri or ABB at the time of closure), which employed 5,500 people at its peak in the 1880s but ceased in the mid-1990s. York is the home of the KitKat and namesake Yorkie bar chocolate brands, as well as the headquarters of the confectionery producer Nestlé York (previously Nestlé Rowntrees). Terry’s chocolate factory, which produced the Chocolate Orange, was situated in the city, but it closed on September 30, 2005, when its owners, Kraft Foods, relocated manufacturing to Poland. The ancient manufacturing building is located near the Knavesmire racetrack.

Nestlé stated on September 20, 2006, that it will lay off 645 workers at the Rowntree’s chocolate plant in York. This followed a string of job losses in the city, including at Aviva, British Sugar, and Terry’s Chocolate Factory. Despite this, employment in York remained rather vibrant until the consequences of the late-2000s recession were apparent.

Since the carriage-works’ shutdown, the land has been converted into offices. York’s economy has grown in fields such as research, technology, and the creative industries. With the establishment of a scientific park near the University of York, the city has become a founding National Science City. York added 80 new technology firms and 2,800 new employment in the area between 1998 and 2008.