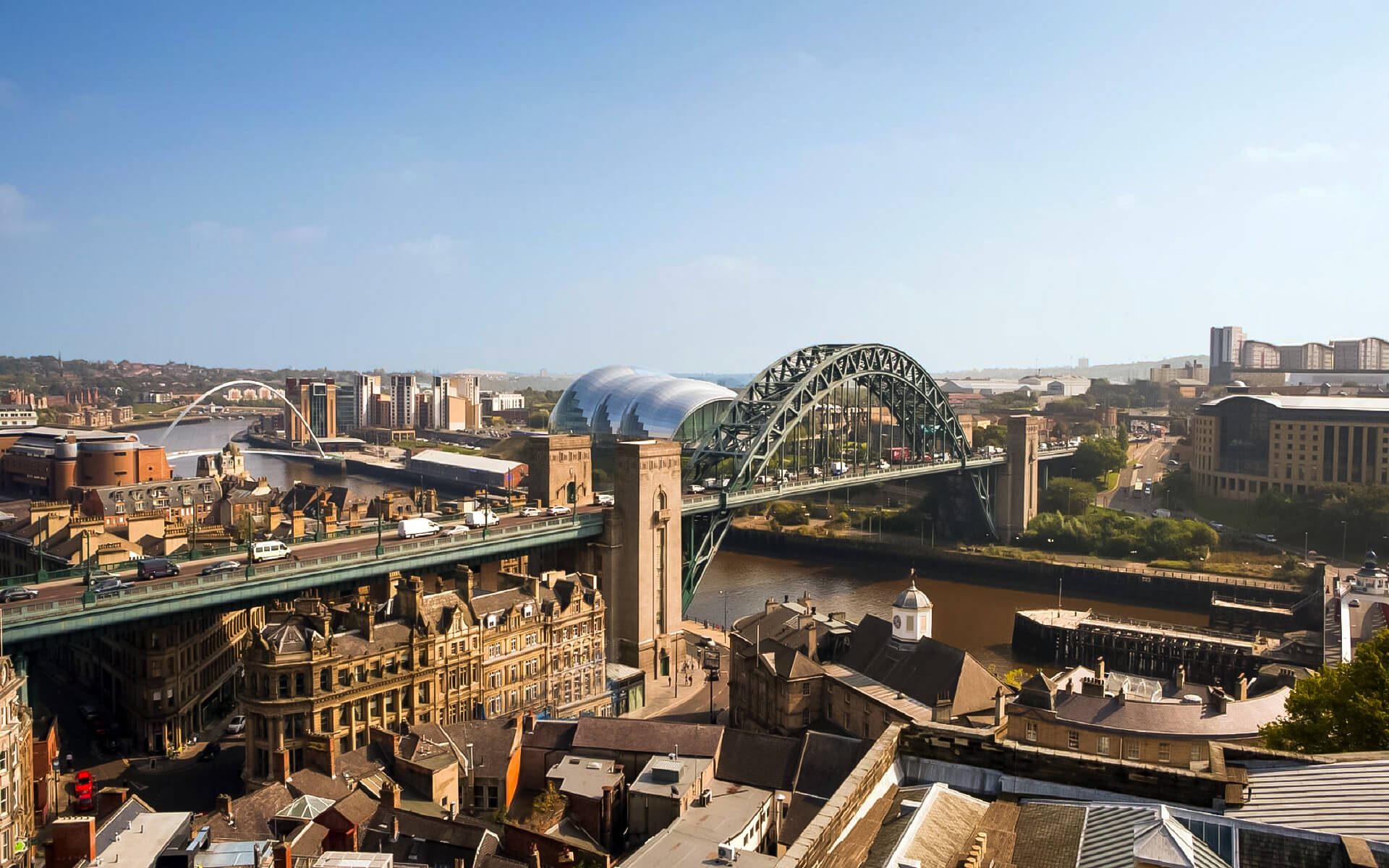 Newcastle upon Tyne, sometimes known as Newcastle, is a city in Tyne and Wear, North East England, located 103 miles (166 kilometers) south of Edinburgh and 277 miles (446 kilometers) north of London on the northern bank of the River Tyne, 8.5 miles (13.7 kilometers) from the North Sea. Newcastle is the most populous city in the North East and serves as the urban hub of Tyneside, the UK’s ninth most populated conurbation.

Newcastle is a member of the English Core Cities Group as well as the European city network Eurocities. Newcastle was part of the county of Northumberland until 1400, when it became a county in its own right, a position it kept until 1974, when it became part of Tyne and Wear. Geordie is the regional nickname and accent for persons from Newcastle and the surrounding regions. Newcastle is also home to Newcastle University, a Russell Group university.

The city sprang up around the Roman hamlet Pons Aelius and was called after the castle erected in 1080 by William the Conqueror’s oldest son, Robert Curthose. In the 14th century, the city flourished as a significant center for the wool trade, and it eventually became a major coal mining location. The port grew in the 16th century and, together with the shipyards farther down the Tyne, was one of the world’s major shipbuilding and ship-repairing centers. Newcastle’s economy comprises corporate headquarters, learning, digital technology, retail, tourism, and cultural centers, and the city contributes £13 billion to the UK’s GVA. Newcastle Brown Ale, Newcastle United football club, and the Tyne Bridge are among its symbols. Since 1981, it has hosted the world’s most popular half marathon, the Great North Run.

Newcastle is a vibrant and varied city noted for its nightlife, art, music, and sports. It is one of England’s key cities and a center of culture, architecture, and commerce. It is compact, beautiful, and welcoming. Tours of the Northumberland coast and Hadrian’s Wall depart from Newcastle. The city is also known for its Geordie culture, which includes a rich tradition of folk music and dance as well as its distinct dialect.

As of July 2015, all tourist information centers, including those at The Guildhall and The Central Arcade, have been closed. The latter’s vacant office remained, with a placard instructing travelers to do their research online instead.

Newcastle Airport has a tourist information kiosk near the check-in hall.

Newcastle has a cold oceanic (Köppen Cfb) climate since it is located in the coldest part of England. It is also one of the driest cities in the UK due to its location in the rain shadow of the North Pennines. Temperature extremes recorded at Newcastle Weather Centre range from 32.5 degrees Celsius (90.5 degrees Fahrenheit) in August 1990 to 12.6 degrees Celsius (9.3 degrees Fahrenheit) in January 1982. Newcastle has colder winters and cooler summers than other British cities. Newcastle upon Tyne is often regarded as England’s coldest major metropolis.

Newcastle lies in the North East of England, in the metropolitan county of Tyne and Wear, as well as the historical and traditional county of Northumberland. The city is situated in a latitude of 54.974° N and a longitude of 1.614° W on the northwestern bank of the River Tyne. It is 46 miles south of Southdean from the Scottish border.

Newcastle’s medieval street plan may still be seen in major portions of the city. Narrow alleyways or chares, most of which can only be walked on foot, may still be found in abundance, especially near the river. Stairs from the riverbank to higher areas of the city center, as well as the existing Castle Keep, which was first attested in the 14th century, are still in situ in certain locations. Bessie Surtees Home, the Cooperage and Lloyds Quayside Bars, Derwentwater House, and House of Tides, a restaurant located in a Grade I-listed 16th century merchant’s house at 28–30 Close, are among the newer buildings in Close, Sandhill, and Quayside.

Newcastle was a key center for coal mining and industry during the 19th century Industrial Revolution. Newcastle’s heavy industries decreased in the second part of the twentieth century, and today the city’s mainstays are office, service, and retail jobs. Thanks to the work of City of Newcastle climate change officer Adrian McLoughlin, the city is now recognized for its dedication to environmental concerns, with a program planned for Newcastle to become “the first Carbon Neutral municipality.”

Newcastle serves as the economic, educational, and cultural hub for North East England, in collaboration with adjacent Gateshead. Newcastle’s economy, as part of Tyneside, contributes around £13 billion to the UK GVA. The Central Business District is located in the heart of the city, bordered by Haymarket, Central Station, and the Quayside neighborhoods.

Newcastle was ranked ninth in the UK retail center spending league in 2010. Newcastle City Centre has a number of main retail districts. The Eldon Square Retail Centre, one of the greatest city centre shopping complexes in the UK, is the largest of them. It has a Debenhams shop as well as one of the biggest John Lewis stores in the United Kingdom. This John Lewis store was once known as Bainbridges. Bainbridge’s, which established in Newcastle in 1838, is widely regarded as the world’s first department store. Emerson Bainbridge (1817–1892), the pioneer and creator of Bainbridges, marketed items via departments, which was a novel merchant practice at the time. The word department store came from the Bainbridge’s official ledgers, which listed income by department. Eldon Square is now receiving a complete renovation. In March 2007, a new bus station, which replaced the previous subterranean bus station, was formally inaugurated. The wing of the complex near Grainger Street, including the underground Green Market, was removed in 2007 so that the area could be rebuilt. This was finished in February 2010 with the launch of a Debenhams department store, as well as the opening of other prominent retailers such as Apple, Hollister, and Guess.

Northumberland Street is the city’s principal retail street. According to a 2004 survey, it is the most expensive retail strip in the UK for rent outside of London. It is home to two prominent department shops, including the first and biggest Fenwick, which contains some of the most luxury designer brands, and one of the largest Marks & Spencer stores outside of London. Eldon Square Shopping Centre is accessible from both stores.

Other retail areas in Newcastle include Grainger Street and the Grey’s Monument area, the relatively new Eldon Garden and Monument Mall complexes, the Newgate Centre, Central Arcade, and the old Grainger Market. Gosforth and Byker are the major suburban retail centers outside of the city center. The largest Tesco store in the United Kingdom is located on the outskirts of Newcastle in Kingston Park. The MetroCentre, Europe’s biggest indoor retail center, is situated in Gateshead, close to Newcastle.