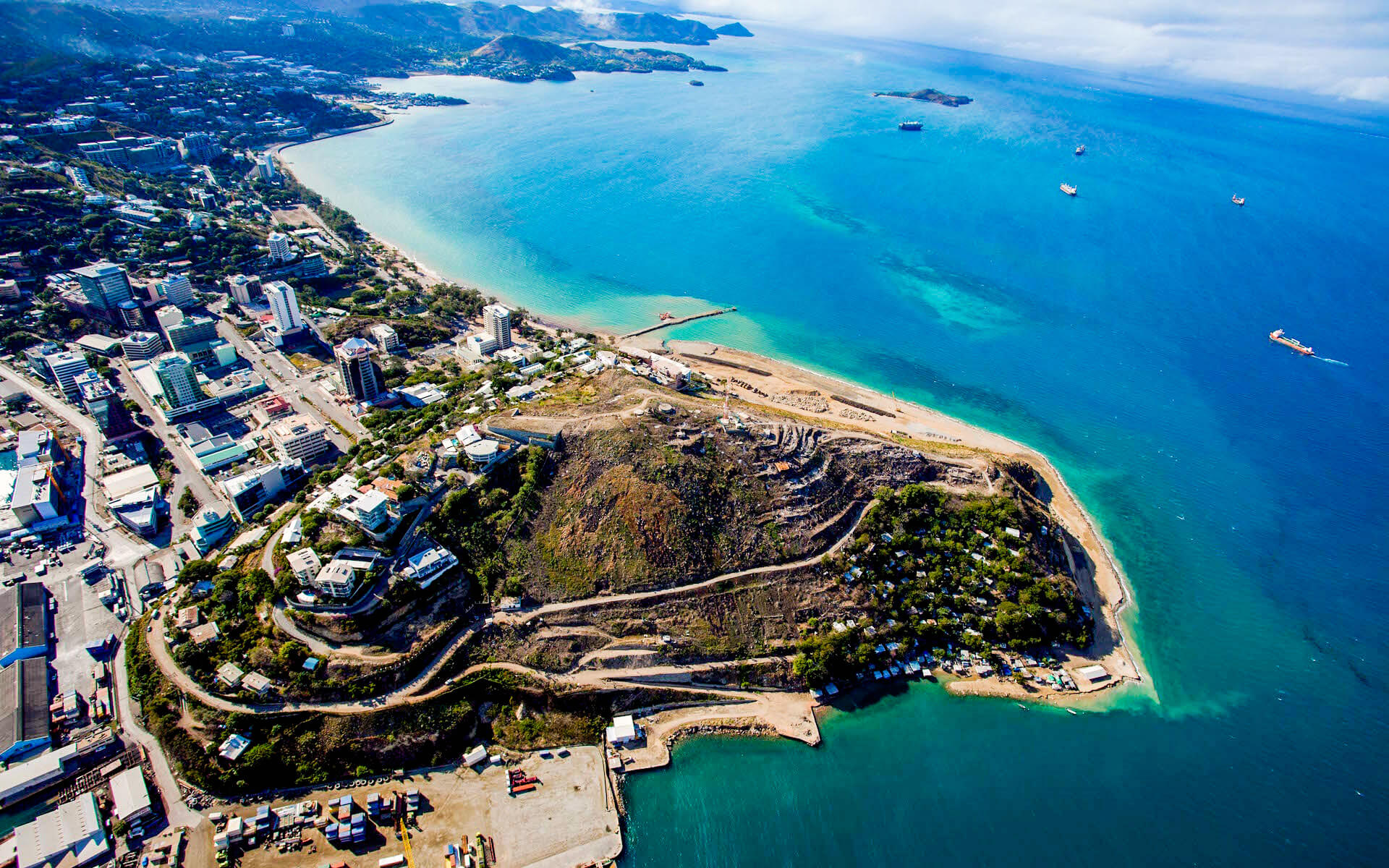 It is situated on the beaches of the Gulf of Papua, on the island of New Guinea’s south-eastern coast of the Papuan Peninsula.

In the second part of the nineteenth century, the city flourished as a commercial center. During WWII, it was a primary target for invasion by Imperial Japanese troops as a staging location and aviation base to cut Australia off from Southeast Asia and the Americas.

The Motu-Koitabu are the area’s indigenous people. Moresby, as it is generally known, was named after Captain John Moresby, the first European arrival in 1873.

The city is fairly large. The initial colonial colony was near the sea, and the port area is now the primary commerce and financial center. Upmarket homes may be seen on the slopes above. Waigani, a 1970s development created to house the Government offices of the newly independent (September 16, 1975) nation of Papua New Guinea, located closer to the airport and isolated from the old town by hills. Boroko and Gordons housing districts are nearby, as are the majority of the main retailers.

Moresby’s attractions might be dispersed for a visitor. The CBD has few ‘attractions,’ and strolling about will not go you very far. It’s pleasant to stroll along Ela Beach and in the market areas, but you’ll have to rely on motorized transportation elsewhere. There are a few push-bikes available, but getting one to rent may be difficult.

There are a variety of reefs and wrecks in Port Moresby, and diving may be booked via day cruises or on adjacent Loloata Island (which has its own dive shop). There are places and depths to suit all levels of expertise.

If you are a foreigner in Port Moresby, you have four options for grocery shopping: Andersons Foodland, currently known as SVS Harbour City, Stop & Shop in Hohola, Boroko Foodworld in Boroko, and Gordons. Andersons, which is immediately close to the Royal Papua Yacht Club, is generally sufficient. Foodworld, which is bigger and situated over the hill in Boroko, is another an option. Boroko Foodworld, which is considerably bigger and newer, is located farther east in Gordons. Vision City, Port Moresby’s first commercial mall, opened recently in Waigani. RH, a big hypermarket, sells everything from home furnishings to baked beans. Their supply is plentiful, their quality is high, and their pricing are competitive. What one should keep in mind is that not everything imported is constantly present. If you find something you want, you often have to purchase a lot of it since you never know when the next shipment will arrive. This does not apply to staple foods, but rather to those that may not be in great demand, such as herring. RH has effectively bridged this gap.

Botanical Gardens. A must-see for every traveler. There are several magnificent instances of PNG wildlife here, including birds of paradise, casowaris, and various other local species. If you’re fortunate, you could catch a wedding while you’re there since some residents do their ceremonies in the grounds. The National Orchid Park, which is on the same road, is also worth a visit; it is expected to include a zoological garden in the future.

Golf Club of Port Moresby A excellent golf course situated just across the street from the government offices. Visitors will find the pricing to be relatively reasonable. Crocodiles live in the golf course’s water holes, so be cautious. After a game of golf, the main building offers a wonderful restaurant where one may have lunch and a couple SP beers (South Pacific beers).

The Ela Beach Craft Market is a weekly market at Ela Beach, Hawaii. This market, organized on the last Saturday of each month by the Ela Murray International School, brings together local treasures from all throughout Papua New Guinea. A simple method to get gorgeous carvings, handwoven baskets, or any of a variety of other items to take home as mementos.

Touaguba Mountain There isn’t much to see here, but it’s where the ambassadorial houses are, as well as where many of the well-to-do expats and locals live. From the top of the hill, there is a beautiful view over the city center and the coast.

Sir Hubert Murray Highway, Moitaka Wildlife Sanctuary There are several crocodiles, some of which are very enormous, as well as birds and other creatures.

Hiri Moale Festival This is held on the weekend of PNG’s Independence Day in mid-September. The main event is a race of up to 100 traditional Lakatoi canoes, which recalls the sea trips performed by the Motuan people of Port Moresby, who traded sago and clay pots with the people of neighboring Gulf Province. The canoes’ departure from Port Moresby’s Ela Beach is very stunning. The Festival is the city’s primary cultural event, including traditional performances as well as canoe races.

Port Moresby has a tropical wet and dry climate with reasonably consistent temperatures all year. The rainy season lasts from December to May, whereas the dry season lasts for the remaining six months.

The average annual rainfall in Port Moresby is little over 1,000 mm (39.4 in). Depending on the time of year, average daily high temperatures vary from 28 to 32 °C (82 to 90 °F), while average low temperatures show little seasonal change, holding around 26 °C (79 °F). During the dry season, it is significantly colder in the city.

Port Moresby’s economy has been expanding in recent years. Apart from the formerly large but now drastically depressed Boroko, most of it has seen extensive construction of houses, office complexes, and commercial organizations. Airlines PNG’s headquarters are located on the grounds of Jacksons International Airport.